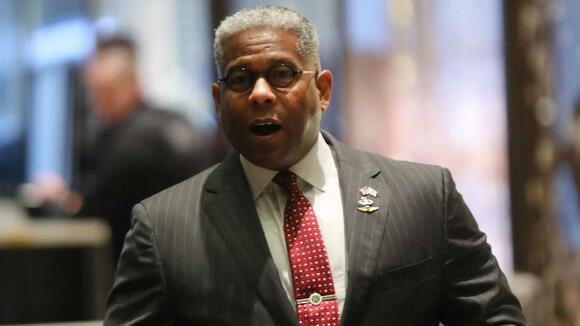 Texas gubernatorial candidate Allen West (R), who is currently recovering from COVID-19, said his hospitalization with the virus has made him “more dedicated to fighting against vaccine mandates.”

West, who announced Saturday night that he has coronavirus-related pneumonia, advocated for monoclonal antibody infusion therapy as a way to combat COVID-19 instead of vaccines.

“I can attest that, after this experience, I am even more dedicated to fighting against vaccine mandates. Instead of enriching the pockets of Big Pharma and corrupt bureaucrats and politicians, we should be advocating the monoclonal antibody infusion therapy,” Allen said on Twitter from the hospital Sunday morning.

Allen and his wife, Angela West, underwent monoclonal antibody infusion therapy at a Dallas emergency room on Saturday, the candidate revealed in a tweet. He said he now has natural immunity and double the antibodies.

West, a former GOP U.S. House member representing Florida and the ex-chair of the Texas Republican Party, is running to unseat Texas Gov. Greg Abbott (R), whom West has criticized for his handling of the pandemic and his stance on immigration at Texas's border with Mexico.

West wrote on Twitter that if he is elected governor he will “crush” any individuals who attempt to implement vaccine mandates.

“As Governor of Texas, I will vehemently crush anyone forcing vaccine mandates in the Lone Star State. There are far better protocols that individual citizens can utilize and decide for themselves,” Allen said.

“Our bodies are our last sanctuary of liberty and freedom, I will defend that for everyone, even the progressive socialist jackasses who must be saved from themselves,” he added.

Angela West, who is vaccinated, was released from the hospital to return home, according to a tweet from Allen West. The candidate, who has not yet received the shot, is still at Medical City in Plano, Texas.

West said his oxygen saturation levels are now between 94 and 96, after previously dropping to 85. He said his blood pressure is at 120 over 74 and his recent temperature was 98.7.

West has suspended in-person campaign events until he is cleared to return to the trail.

Abbott tested positive for COVID-19 in a breakthrough case in August. At the time of his announcement, he said he was experiencing no symptoms.

More than 72 percent of Texans aged 12 and older are at least partially inoculated against COVID-19, according to the state’s vaccine tracker.

Does Alan West know that the monoclonal antibodies infused into his bloodstream were made by the same pharma companies that make the shots? But cost 100-1000x more than the vaccines and are only available to to after you're at serious risk of long covid (aka long term organ and brain damage)?Which Big Pharma donors contributed to his campaign funds?

If "our bodies are our last sanctuary of liberty and freedom" why has his state of Texas taken that liberty away from women with unwanted pregnancies? Maybe those freedoms are only for the men?

Prayers for a speedy recovery Mr. West. Your defense of our constituional rights are deeply appreciated most needed. You shouldn't have to defend what is already ours according to the Constitution of the U.S. God be with you in your efforts, and thank you again for fighting the good fight.

GOP-controlled legislatures are seeking to undermine President Joe Biden's vaccine mandate. Four states have passed bills that would provide unemployment benefits to those fired for refusing the vaccine. Vaccine mandates have become an issue of fierce partisan controversy. Republican-controlled legislatures in four states are changing their unemployment laws so that...
U.S. POLITICS・2 DAYS AGO
wtvy.com

BIRMINGHAM, Ala. (WBRC) - As more treatments and medication become available for Covid-19, doctors say it is still dangerous and it could be that way for a while. Dr. George Crawford with the Regional Medical Center in Anniston says although COVID and the flu have similarities, they are very different. Each year, COVID is changing and becoming more dangerous that any strand we’ve seen of the flu.
ANNISTON, AL・1 DAY AGO
KATC News

What the recent ruling against a federal vaccine mandate means

We are getting more clarity on what a recent ruling against a federal vaccine mandate means, and who it will affect. Judge Terry A. Doughty in the Western District of Louisiana granted a motion for a preliminary injunction.
LAW・7 HOURS AGO
WashingtonExaminer

The COVID-19 vaccination mandate for health care workers in Centers for Medicare and Medicaid Services (CMS) facilities in 10 states, including Iowa, has paused as of a court decision issued Monday.
IOWA STATE・1 DAY AGO

Mississippi Gov. Tate Reeves (R) claimed on Sunday that President Joe Biden‘s Covid vaccine policy has “made it more difficult in rural states like Mississippi to get more and more people vaccinated.”. During the interview with MSNBC’s Chuck Todd, Reeves underscored his support for the vaccine — mentioning that he...
MISSISSIPPI STATE・3 DAYS AGO
POLITICO

White House chief medical adviser Anthony Fauci told reporters Wednesday the individual was fully vaccinated, but added it is believed they did not receive a booster shot.
CALIFORNIA STATE・12 HOURS AGO
kentuckytoday.com

FRANKFORT, Ky. (KT) – Attorney General Daniel Cameron announced Tuesday he is joining a multi-state lawsuit, which is challenging the Biden Administration’s COVID-19 vaccine mandate for healthcare workers. The interim final rule that has been issued by the Centers for Medicare and Medicaid Services, or CMS, requires COVID-19 vaccinations for...
FRANKFORT, KY・8 DAYS AGO
WFPL

Louisiana Doctors Note One COVID Side Effect is a Growing Concern

Louisiana residents who have had COVID are speaking out about a side effect of the disease that doesn't seem to go away.
LOUISIANA STATE・2 DAYS AGO
Washington Post

Red states are now paying people not to get vaccinated

Once upon a time, states debated whether to pay people to get vaccinated. Now, some red states are paying people not to get vaccinated, by cutting checks to workers who quit or are fired because they refuse covid-19 shots. Opinions to start the day, in your inbox. Sign up. All...
PUBLIC HEALTH・2 DAYS AGO
WashingtonExaminer

Four states with Republican legislatures have changed their laws to permit those who lose their jobs over vaccine mandates to still collect unemployment benefits.
HEALTH・2 DAYS AGO
McKnight's

This story has been updated to include additional details. Two pending court challenges against the Biden administration’s COVID-19 vaccination mandate now take center stage after a federal judge on Monday temporarily halted the rule in 10 states. The preliminary injunction was handed down by the U.S. District Court for the...
U.S. POLITICS・2 DAYS AGO

The summer coronavirus surge is over but now we find ourselves in a "winter wave," as cases rise before the holidays have even started. How can you stay safe? Dr. Anthony Fauci, the chief medical advisor to the President and the director of the National Institute of Allergy and Infectious Diseases, appeared today on MSNBC's Morning Joe to share ways you can keep COVID away—and he mentioned where COVID cases as rising fastest. Read on for 5 life-saving tips—and to ensure your health and the health of others, don't miss these Sure Signs You've Already Had COVID.
PUBLIC HEALTH・9 DAYS AGO
Wichita Eagle

After President Joe Biden announced a series of federal rules to boost COVID-19 vaccinations earlier this fall, Kansas Sen. Mark Steffen circulated a petition to call the Legislature into special session to fight back. The first petition failed to gain support, but just a few weeks later, the Hutchinson Republican...
KANSAS STATE・9 DAYS AGO
Business Insider

Laws have been passed in Florida that disallow COVID-19 mandates, and once the governor signs them they can be implemented. The laws were passed during a special sessions in Tallahassee Florida. President Joe Biden’s vaccine plan has been halted as court proceedings play out, and in the meantime Florida is...
FLORIDA STATE・13 DAYS AGO

RENO, Nev. (News 4 & FOX 11) — About three-quarters of Nevada corrections workers are vaccinated against COVID-19 as the state's mandate starts to go into effect this month, according to new numbers provided by the Nevada Department of Corrections. The latest figures show 76% of NDOC employees are either...
NEVADA STATE・13 DAYS AGO
NewsOne

Notable Anti-Vaxxers Who Have Died From COVID-19

Here is a list of famous anti-vaxxers who have died from COVID-19.
PUBLIC HEALTH・8 HOURS AGO
QuadCities.com

BREAKING NEWS: Illinois has become a new “hot spot” for covid, according to CDC and Illinois Department of Health data released today, prompting officials to consider new restrictions in the state. The Midwest is experiencing the highest surge in covid over the past month, data shows. Michigan, Minnesota and Wisconsin...
ILLINOIS STATE・9 HOURS AGO
MarketWatch

The CDC is encouraging all eligible people to get COVID booster shots, but it's not considering boosters when labeling a person 'fully vaccinated'
PUBLIC HEALTH・10 HOURS AGO