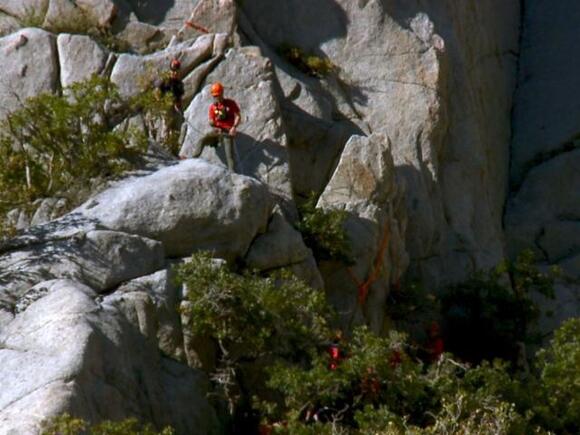 The climber was traversing a section called "Becky’s Wall" near Gate Buttress when a large rock he was holding onto came loose. He fell about 30 feet, the rock landed on him, and he died instantly.

He was identified Monday morning by authorities as Mason Boos, age 25, of Salt Lake City.

“The rock’s about the size of a Subaru and about three feet tall,” UPD Sgt. Ed Twohill said.

“It is kind of hard to wrap your brain around,” Twohill said. “Kind of looking for ‘What could I have done better?’ [and] who to blame, and there’s just nothing. They did everything right and it just broke.”

Fans of Native American Art know Sally Black as one of the greatest living Navajo basket weavers. Her work is displayed in museums and galleries around the southwest.
PUBLIC SAFETY・7 HOURS AGO
FOX 13 News

A man is in critical condition at a local hospital after he was hit by a car while lying in the road.
WEST VALLEY CITY, UT・21 HOURS AGO
FOX 13 News

An Idaho State Police trooper received his holiday miracle a bit early Wednesday after nearly being hit by a pickup truck while assisting another driver.
IDAHO STATE・1 DAY AGO

When a 92-year-old Utah man was unable to go hunting without assistance, wildlife officials jumped into action.
PUBLIC SAFETY・1 DAY AGO
FOX 13 News

A fire at the Creech Dairy Farm in Cornish burns over 650 tons of hay
CACHE COUNTY, UT・2 DAYS AGO
FOX 13 News

Two suspects remain at large Wednesday after they carjacked a vehicle and then crashed into a home.
WEST VALLEY CITY, UT・1 DAY AGO
FOX 13 News

Salt Lake City is the cream of the crop while topping many "best" lists of U.S. cities, but there's a new one that only porch pirates would be proud of.
SALT LAKE CITY, UT・1 DAY AGO
FOX 13 News

Toddler with Down syndrome battling COVID-19 in Utah hospital

Evie Compton is just a toddler, but is in the hospital fighting a tough battle with COVID-19, made worse because she has Down Syndrome.
UTAH STATE・17 HOURS AGO
FOX 13 News

Animal control was able to save three kittens from a storm drain.
SALT LAKE CITY, UT・3 DAYS AGO
FOX 13 News

One person was killed and two others in a group were rescued after making an emergency call in Zion National Park over the weekend.
ACCIDENTS・4 DAYS AGO
FOX 13 News

A Utah woman died after she crashed while riding an ATV near Bear Lake Friday night.
FISH HAVEN, ID・4 DAYS AGO
FOX 13 News

This Thanksgiving holiday was difficult for the family and friends of 13 year old London Seely.
SALT LAKE CITY, UT・2 DAYS AGO
FOX 13 News

Herriman boy inspired by Batman to clean up community

An eight-year-old is hoping his gesture of cleaning up the community will inspire more kids to do good. Jake Grogan is following in the footsteps of his hero Batman to become a hero in his own neighborhood.
HERRIMAN, UT・1 DAY AGO
FOX 13 News