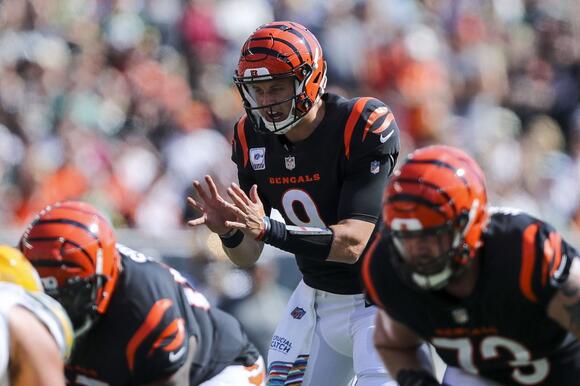 Second-year quarterback Joe Burrow had his Cincinnati Bengals at a surprising 3-1 heading into Sunday’s game against Aaron Rodgers and the Green Bay Packers.

Said game was expected to be among the best on the Week 5 early slate. Burrow and the Bengals didn’t disappoint by taking a 7-0 lead in the first quarter before Green Bay scored twice and took a two-point advantage.

Unfortunately for Burrow and the Bengals, he suffered a brutal hit in the second quarter and had to head to the medical blue tent. Check out Joe Burrow getting absolutely trucked by two different Packers defenders.

That’s just brutal stuff. As people have been indicating, Burrow needs to know when to slide. He’s the franchise quarterback. He’s a generational talent.

Remember, the former Heisman winner at LSU missed the final six games of his rookie campaign with a torn ACL.

The good news? Burrow made his way back to the Bengals’ bench to study the last possession with his quarterbacks coach.

Either way, this isn’t something Bengals fans want to continue seeing. That is to say, Joe Burrow getting hit when he simply should have avoided the contact. 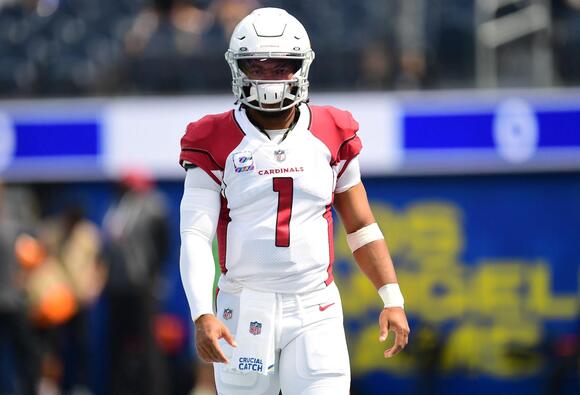 Cincinnati Bengals quarterback Joe Burrow entered Sunday's game against the Pittsburgh Steelers at Paul Brown Stadium with just 55 rushing yards on 24 carries through 10 games this season. He scrambled for an 8-yard touchdown run - his first rushing TD of 2021 - to complete a0-play, 75-yard drive to start the game and...
NFL・10 DAYS AGO
Cincinnati.com | The Enquirer

Joe Burrow on upcoming Bengals game vs. Steelers: 'I'm excited about where we're at'

Cincinnati Bengals quarterback Joe Burrow did something he hadn’t done in his career as a starting quarterback in the NFL in Week 3 – lead the Bengals to a road win over the Steelers. On Sunday, Burrow has a chance to do something Cincinnati hasn’t done since 2009 – sweep Pittsburgh.
NFL・14 DAYS AGO
ClutchPoints

The Cincinnati Bengals just didn’t have enough juice to defeat the Los Angeles Chargers on Sunday. To make matters worse, Joe Burrow suffered an injury on his throwing hand that could affect his status down the road. It’s not the best timing, as the playoffs are just around the corner.
NFL・3 DAYS AGO
FanSided

Joe Burrow dealing with a pinky injury during Chargers game

Any injury-related news is bad but when it’s surrounding Joe Burrow, that’s the worst-case scenario for the Cincinnati Bengals. As the Bengals are battling the Chargers in a key AFC matchup with massive playoff implications, Burrow’s right pinky finger was bending in a way that it shouldn’t have been bending. The broadcast showed Burrow throwing the ball on the sideline and looking like he was in an immense amount of pain when the ball came out of his hand.
NFL・3 DAYS AGO

Cincinnati Bengals quarterback Joe Burrow dislocated the pinkie finger on his throwing hand during Sunday’s 41-22 loss to the visiting Los Angeles Chargers. Burrow injured the right pinkie when he was the victim of a strip-sack six-plus minutes into the opening quarter. He remained in the contest and also insists he will be on the field for next Sunday’s home game against the San Francisco 49ers.
NFL・3 DAYS AGO
Cleveland.com

Joe Burrow and the Bengals will take on Justin Herbert and the Chargers on Sunday in a matchup not only of arguably the two top quarterbacks from the 2020 NFL Draft, but of AFC wild card contenders. Kickoff in Cincinnati is at 1 p.m. Eastern. WATCH LIVE FOR FREE: fuboTV...
NFL・3 DAYS AGO
Yardbarker

Joe Burrow planning to play through injury after dislocating finger

Joe Burrow suffered an injury during Sunday’s game that appeared to be quite painful, but he is not expected to miss any game action because of it. Burrow hurt his right pinky finger in the second quarter of the Cincinnati Bengals’ loss to the Los Angeles Chargers. He was seen on the sideline throwing passes afterword, and he was clearly in significant pain. Burrow’s pinky finger was then shown on the CBS broadcast and appeared badly swollen. He returned to the game and made some strong throws, but the injury likely impacted his performance.
NFL・2 DAYS AGO
USA TODAY Sports Media Group

In the middle of the Cincinnati Bengals taking apart the Pittsburgh Steelers in what ended up as a 41-10 victory, Bengals quarterback Joe Burrow got planted by T.J. Watt. Given the history between these rivals, and just because of the way it looked, it fired up the Bengals fanbase. The...
NFL・9 DAYS AGO

What Joe Burrow, Zac Taylor And The Bengals Said Following The Win Over The Steelers

"Yep, sure did. That's the tone we want to set with the run game on offense. And again, I've said it in here before, it's all the guys. It's not just Joe, but Joe certainly finished off those runs the right way. It was certainly good to see. A lot of good things happened.
NFL・10 DAYS AGO
Yardbarker

Joe Burrow is one of 11 Bengals players participating in the NFL's "My Cause, My Cleats" campaign this week. On the field, Cincinnati is hoping to beat the Chargers to keep pace in the AFC Playoff race, but players are using their cleats to support causes that they feel passionate about off the field.
NFL・6 DAYS AGO
Yardbarker

Cincinnati Bengals quarterback Joe Burrow put together a fairly mediocre performance on Sunday, and a finger injury might have had something to do with it. The pinkie finger on Burrow’s throwing hand was visibly swollen during Sunday’s game against the Los Angeles Chargers. Burrow played through the injury, but the results weren’t great, as he threw two interceptions in a 41-22 loss.
NFL・3 DAYS AGO
Mercury News

SANTA CLARA — Nick Bosa played along and gave the automated response you’d expect of any sack artist. The question: Are there any quarterbacks you hate?. “All of them,” Bosa replied with a light laugh. An exception to The Anti-Quarterback Club is the one he’ll pursue this...
NFL・13 HOURS AGO

Joe Burrow suffered a dislocated pinkie in the Cincinnati Bengals' 41-22 loss to the Los Angeles Chargers in Week 13. The Bengals quarterback said he threw the ball in pain Sunday but does not plan on missing any games. Ian Rapoport reported Monday that the Bengals tried numerous options to keep the finger out of pain, but none of them worked.
NFL・2 DAYS AGO
National football post

Joe Burrow has plans, provided the Cincinnati Bengals quarterback gets his dislocated right pinky to cooperate. Burrow intends to take the practice field Wednesday and throw for the first time since he was hurt in Sunday’s loss to the Los Angeles Chargers. “We’ll have to see. I’m going to...
NFL・12 HOURS AGO
ESPN

CINCINNATI -- When the Cincinnati Bengals coaching staff did its final walkthrough for the 2020 Senior Bowl, they saw why quarterback Justin Herbert was a top prospect. It was clear the ex-Oregon standout had spent time studying the limited playbook, working on his command at the line of scrimmage while looking to make a strong impression, especially with the Bengals, who had the first pick in the draft.
NFL・5 DAYS AGO
CBS Sports

Joe Burrow made his NFL debut against the Chargers in Week 1 of the 2020 season. With fellow rookie quarterback Justin Herbert watching from the sideline, Burrow's late-game comeback bid was undone by a missed field goal that preserved the Chargers' 16-13 victory. Quite a few things have changed in...
NFL・6 DAYS AGO
USA TODAY Sports Media Group

Joe Burrow has amazing response to Bengals not getting primetime games

The Cincinnati Bengals continue to miss out on having games flexed into primetime this season. Not that quarterback Joe Burrow cares. First, the team missed out on having its Week 13 game against the Los Angeles Chargers moved to “Sunday Night Football.” Then, it became clear the team’s Week 15 game against the Denver Broncos wouldn’t be one of two Saturday primetime games.
NFL・14 DAYS AGO
USA TODAY Sports Media Group

Cincinnati Bengals quarterback Joe Burrow is one of the NFL’s highest-graded passers at Pro Football Focus. Over the first 12 weeks, Burrow checks in with an 86.2 overall grade, third among passers with 100-plus attempts. That puts him only behind Tom Brady and Kirk Cousins. Burrow also has an 85.4...
NFL・6 DAYS AGO