Ford is being forced to temporarily suspend production at the Hermosillo production plant in Mexico on October 11 and 12th. The production suspension was confirmed by union workers at the plant and is being blamed on a shortage of material. However, Ford hasn’t specifically said what material shortage is causing the production problem. Presumably, the shortage is chips required for controlling vehicle systems, but that is unconfirmed. 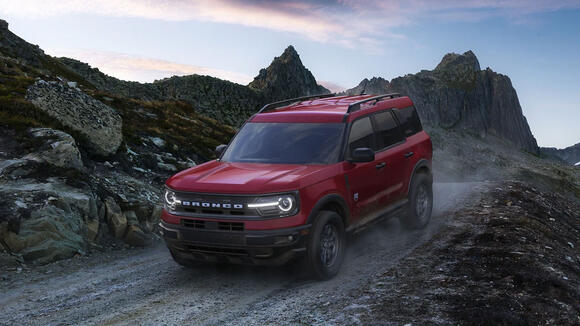 Ford certainly wouldn’t be the first major automotive manufacturer to be forced to suspend production due to chip shortage. A shortage of chips is impacting multiple industries worldwide and stems from production decline due to the ongoing pandemic. The union confirmed that Ford would pay workers 75 percent of their salary on October 11 and 12th even though they won’t be working. The manufacturing facility in Mexico produces the Bronco Sport SUV.

While Ford didn’t confirm the production stoppage was due to a short supply of chips, other auto manufacturers, including GM and Volkswagen having to stop production for that reason. Last week, Nissan confirmed two of its Mexican facilities would stop production during October.

Ford’s Mexican facilities aren’t the only ones that have been forced to suspend production. Earlier this month, the Blue Oval confirmed that plants at Flat Rock, Michigan, and parts of the Kansas City plant would also stop production briefly. With such high demand for Bronco Sport, stopping production for any length of time is certainly not what Ford wants to do.

With high demand and low availability, many automotive buyers who want a Bronco Sport have been unable to find one. Reports have also been circulating that dealerships that do have Bronco Sport vehicles on their lots are tacking on significant market adjustments, sometimes as much as $10,000 on top of the sticker price.

Ford forced to suspend Bronco Sport production for two days is written by Shane McGlaun and originally posted on SlashGear .

Rivian is telling R1S buyers when their electric SUV should arrive

Rivian preorder customers continue to receive their R1T and R1S delivery estimates, and despite some indications to the contrary, it seems the all-electric SUV is still on track for an early 2022 arrival. Deliveries of the R1T – Rivian’s zero-emission pickup – began earlier this year, albeit in small numbers, as the startup began to produce what has become one of the more eagerly-anticipated EVs.
CARS・1 DAY AGO
SlashGear

Next-generation Ford Ranger ditches the camo and struts its stuff

When Ford returned the Ranger to the US several years ago, the truck was new to our market, but it wasn’t entirely new, having been available in other countries before. The Ranger proved popular and helped broaden the competition in the mid-size truck market dominated by Toyota. Ford has now revealed the next-generation Ranger, and the mid-size pickup is packed with features and promises improved capability compared to the current model. Ford says it collaborated with truck customers around the world to develop a more versatile and desirable truck.
CARS・2 DAYS AGO
SlashGear

GM’s EV roadmap is getting wet

General Motors is wading into boating, splashing out on a 25% stake in a US EV firm specializing in electric boat propulsion systems. Pure Watercraft is a Seattle-based company that developed a zero-emissions outboard motor which is not only near-silent, but requires no maintenance either. The Pure Outboard system looks,...
ECONOMY・3 DAYS AGO
CarBuzz.com

With deliveries of the Ford Maverick now underway, aftermarket tuners have wasted no time customizing the new compact pickup. Ford hasn't announced plans to build a high-performance Raptor version, but the Maverick is designed to be easy to customize by aftermarket tuners. At the SEMA show earlier this month, New...
CARS・9 HOURS AGO

The 2021 Ford Bronco is becoming more familiar to customers and professional critics alike, amid the continued rollout of the relatively new off-road oriented SUV. As Ford Authority previously reported, the automotive intelligentsia overwhelmingly praised it earlier this year, as they discovered that Ford managed to properly reintroduce a modern iteration of the formerly long-running nameplate without any major compromises. It should come as no surprise then that Car and Driver reached the same overall conclusion in a recent comparison test that had it go toe-to-toe with the 2021 Jeep Wrangler.
CARS・2 HOURS AGO
CarBuzz.com

Ford Bronco Will Hold Its Value Better Than Jeep Wrangler

The results of the J.D. Power 2022 US ALG Residual Value Awards have been revealed. These awards reveal the brands and models that are expected to retain the highest percentage of their value after three years, and points to aspects like vehicle quality and brand recognition. The study also provides a useful research tool when considering the trade-in value of a new car or assessing leasing costs.
BUYING CARS・3 DAYS AGO
SlashGear

In June, Ford announced a critically important vehicle for the brand. That vehicle was the 2022 Ford Maverick. The 2022 Maverick is a small pick-up that promises excellent fuel economy to the tune of 40 MPG in the city for the hybrid trim. The Maverick is exactly the sort of vehicle Ford promised when it discontinued all of its cars in the US, except the iconic Mustang.
CARS・4 DAYS AGO

It's not a huge surprise that automakers want to take production matters into their own hands. We've said before that the global semi shortage "may not just go away" on its own in 2022.
ECONOMY・4 DAYS AGO
CarBuzz.com

Do your neighbors complain about your SUV not being green enough as they drive slowly by in their new EV?. Well, have we got a solution for you - chia sprouts. These sprouts are commonly used in Chia Pets as a replacement for fur or hair. The teams at Quake LED and DS18 Sound simply decided to do it on a larger scale, using a vehicle as the foundation for this living garden. It's what DS18 calls one of their Freak Show uilds.
CARS・4 DAYS AGO
Autoblog

Quadratec, one of the world's best-known manufacturers of aftermarket parts for Jeep vehicles, is turning its attention to the born-again Ford Bronco. It announced a new division named Stallion 4x4 that aims to provide enthusiasts with a trove of Bronco-related resources and parts. While the company hasn't published its first...
CARS・4 DAYS AGO
fordauthority.com

Back in September, Ford released the latest installment in its “Built for America” ad series with a short clip featuring the automaker’s all-electric trio of vehicles – the 2021 Ford Mustang Mach-E, 2022 Ford E-Transit, and 2022 Ford F-150 Lightning. The premise of the ad centers around innovation, as well as how the 118-year-old company is adapting its products for the future. Strangely enough, however, there is one singular, seemingly ICE-powered vehicle present in the video – the 2021 Ford Bronco, which could potentially be a subtle hint that a Ford Bronco EV is in the works.
CARS・4 DAYS AGO

Luckily, it can still off-road thanks to air suspension. The Ford Bronco is a capable new four-wheel drive, and not typically the first vehicle you'd choose to slam on lowered suspension. However, that's precisely why the very concept appeals to some people. Two companies have now teamed up to drop Ford's new off-roader to the floor.
CARS・6 DAYS AGO
stockxpo.com

Ford CEO Jim Farley poses with the Ford F-150 Lightning pickup truck in Dearborn, Michigan, May 19, 2021. Ford Motor plans to increase its production capacity of electric vehicles to 600,000 units globally by 2023, which CEO Jim Farley expects would make the company the second-largest U.S.-based producer of EVs behind Tesla.
DEARBORN, MI・7 DAYS AGO
Coinspeaker

Ford’s ambition is to become the largest producer of Electric Vehicles. To achieve this, the automaker would have to increase its production of EVs significantly. Ford Motor Company (NYSE: F) has announced its plan to increase the production capacity of its electric vehicles (EVs) to 600,000 units by the end of 2023. This plan will double the number of electric cars the company initially intended to produce over the next two years.
ECONOMY・7 DAYS AGO
Motor1.com

Ford has teamed up once again with its Chinese partner Jiangling Motors for another new model planned to be sold exclusively in the People’s Republic. The Equator Sport is making its official public debut at the Guangzhou Auto Show as a new rival for the Honda CR-V and the likes with rugged looks and a spacious interior.
CARS・7 DAYS AGO
CleanTechnica

Ford CEO Jim Farley has taken to Twitter to announce his company is doubling its EV production goal to 600,000 vehicles by 2023. Ford thinks it could be the largest US manufacturer of electric vehicles someday, overtaking Tesla. That might be possible if Tesla doesn’t keep shattering production records of its own, but with the new factory in Austin coming online soon, Farley and company are going to have to stretch some to meet their goal.
ECONOMY・7 DAYS AGO