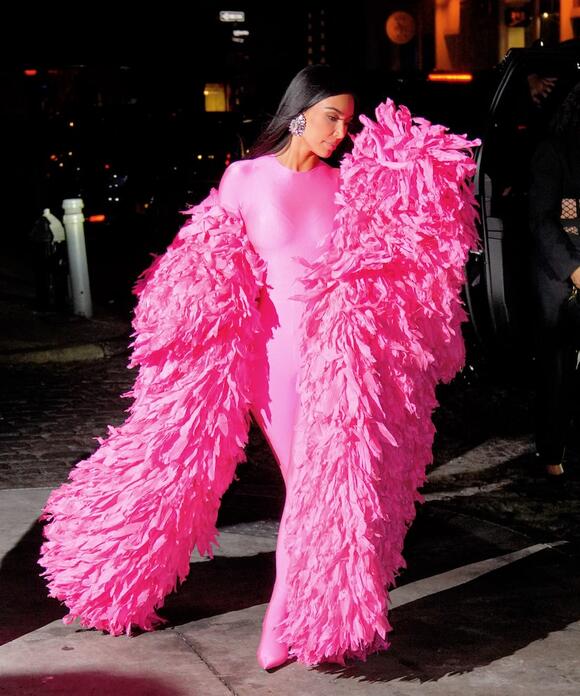 Kim Kardashian, pictured above triumphantly entering the "SNL" after-party early Sunday, had a lot to celebrate about her debut as a host of the show.

Kardashian killed with her take-no-prisoners monologue and did well in a variety of sketches, including playing Jasmine in an "Aladdin" spoof (including a kiss from Pete Davidson), as a ditzy Lotto drawing announcer, and, in a cut-for-time sketch, as a member of a painfully try-hard teen group auditioning for a Costco deal.

In the night's most instantly iconic sketch, Kardashian played her sister Kourtney as an apathetic judge on "The People's Kourt."

In the first case, Khloé Kardashian showed up to play herself, suing Kim (played by a masked Heidi Gardner).

Next, Kris Jenner was on hand as herself suing her daughters Kylie (Melissa Villaseñor) and Kendall (musical guest Halsey). Kris was suing Kylie for not having her baby fast enough and Kendall "because she has absolutely no drama... and it's damaging our brand."

"I'm a Jenner, not a Kardashian," Kendall said, to which Kris replied, "And that's something you need to work on, honey." 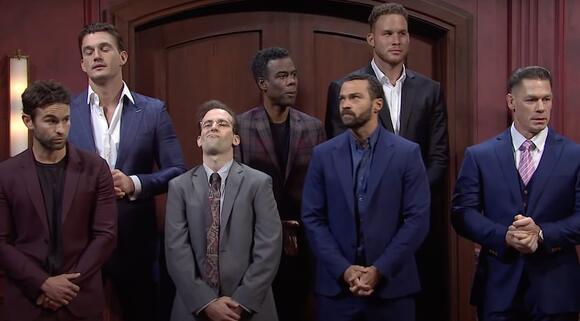 As a bisexual surprise, Amy Schumer emerged as a producer Kim's character also crushed on!

The show's celebrity factor didn't stop there — Halsey enlisted legendary rocker Lindsey Buckingham to accompany her on "Darling," also performing "I Am Not a Woman, I'm a God."

Twitter reactions to Kim's work were largely positive, with viewers expressing surprise at how well she did on her first try.

Watch all the sketches here!

Kanye West’s new girlfriend, Vinetria, didn’t have the nicest things to say about his good pal Travis Scott before they started dating. During an Instagram Q&A in January 2020, a fan asked the model to name the “worst artists out now,” to which she responded, “Um idk. Travis Scott is annoying.”
CELEBRITIES・28 DAYS AGO
hotnewhiphop.com

Kanye West Is Down Bad For Kim Kardashian

Following last night’s revealing Thanksgiving prayer, Kanye West continues to campaign for his estranged wife, Kim Kardashian, to consider taking him back. On Friday afternoon, the father of four shared a sweet throwback photo with the socialite, along with a TMZ headline that reads, “Kanye West Says God Will Bring Kim and Him Back Together, Inspire Millions.”
CELEBRITIES・10 DAYS AGO
Complex

Kim Kardashian and North West made their TikTok debut on Thursday, launching a joint channel with dances to songs by Kanye West, Adele, Playboi Carti, and more. After launching the channel with a pair of videos that showed various shots of Kylie Skin products, a third video, titled “Me and Northie” and soundtracked by Carti’s song “Sky,” shows Kim and North chilling at home and riding around together in a vehicle.
BEHIND VIRAL VIDEOS・10 DAYS AGO
Life and Style Weekly

Speaking her mind? Khloé Kardashian shared a cryptic quote on “life advice” two days after ex-boyfriend Tristan Thompson’s alleged baby No. 3 was born. “Be kind even when you’re tired,” the quote read, which Kardashian, 37, posted to her Instagram Stories on Saturday, December 4. “Be understanding even when you’re angry. Do more than you’re asked, and don’t expect anything in return … One thing you should never do? Never spend time trying to prove to anybody that you’re great, your actions will speak for themselves.”
NBA・1 DAY AGO

Kim Kardashian West and Kanye West’s son Saint is growing up so fast!. The reality television star and mom of four celebrated Saint’s 6th birthday by sharing a series of never-before-seen photos on Instagram on Sunday. The snaps included pictures of Saint dancing around in a lime green matching set,...
CELEBRITIES・1 DAY AGO
HollywoodLife

A solo Pete Davidson lit up on the red carpet for his new show ‘The Freak Brothers’ while Kim Kardashian attended Virgil Abloh’s memorial along with ex Kanye West. Pete Davidson, 28, did his thing at the red carpet premiere for Freak Brothers in Los Angeles on December 6. Pete smoked a joint on the red carpet as he posed for photos. He looked the definition of chill in a white sweatsuit and red coat over top, along with striped pants, sunglasses, and a “Freak’n Easy” hat.
LOS ANGELES, CA・3 HOURS AGO
Ok Magazine

Khloé Kardashian has reemerged since Tristan Thompson welcomed his third child with Maralee Nichols. In photos obtained by The Daily Mail, the reality star, 37, was seen behind the wheel of her black Rolls-Royce SUV, as she made her way to her sister Kim Kardashian's son Saint West's sixth birthday celebrations in Calabasas.
NBA・16 HOURS AGO
Life and Style Weekly

Unbothered? Scott Disick was spotted at a party in Miami while seemingly being snubbed from Kris Jenner’s yearly gingerbread house gift to Kourtney Kardashian. The Talentless founder, 38, attended the Boat to Basel Cigarette event in Miami on Friday, December 3, wearing a plain white sweatshirt with a black cap.
MIAMI, FL・1 DAY AGO

Kim Kardashian has made it clear that she will not get back together with EX Kanye West, aka Ye, after the rapper admitted he wants the reality star back and shared their kissing photo on social media.
CELEBRITIES・8 DAYS AGO
ETOnline.com

Khloé Kardashian's Gym Shoes Have Over 62,000 Five-Star Ratings -- And They're $38 for Black Friday

As the founder of the size-inclusive fashion brand Good American -- which has taken on everything from denim and shoes to ultra-cozy loungewear -- Khloe Kardashian knows a thing or two about cool and comfortable fashion. Case in point: her Adidas Cloudfoam Pure Running Shoes. The 37-year-old Keeping Up With...
BEAUTY & FASHION・10 DAYS AGO
Radar Online.com

Pete Davidson is walking around with a little more swagger after being linked with Kim Kardashian, who is arguably one of the most famous women in the world. However, his new confidence has turned into arrogance according to insiders at Saturday Night Live. Article continues below advertisement. “This isn’t the...
CELEBRITIES・14 DAYS AGO

Pete Davidson Getting Banned From 'SNL' Because of Kim Kardashian? Other Cast Members Are Not Happy Because of THIS

Is Pete Davidson on the verge of being fired or banned from "Saturday Night Live"?. His castmates said he has a lot of air in his head after being associated to Kim Kardashian, who is one of the most well-known people on the planet. Pete, who is claimed to be...
CELEBRITIES・14 DAYS AGO
Popculture

Pete Davidson's Saturday Night Live co-star Chris Redd has a message for those asking for insider tips on Pete and Kim's relationship. The comedian tweeted on Monday that he's more interested in talking about couples he "has a stake" in. "When y'all interviewer's ask us about Pete & Kim, what...
CELEBRITIES・9 DAYS AGO
Pitchfork

Kanye West has posted a special video message to fans titled “Thanksgiving Prayer 🕊.” The five-minute video features Ye speaking about his family life, his marriage to Kim Kardashian West, his public relationship with Christianity, his mental health, being on medication, the period of time where he was supporting Trump and wearing a MAGA hat, and more.
PRESIDENTIAL ELECTION・11 DAYS AGO
The Press

Kim Kardashian West and her daughter have joined TikTok. The former 'Keeping Up with the Kardashians' star and eight-year-old North have already amassed more than 45,000 followers on the platform and gave them plenty of content on Thanksgiving on Thursday (25.11.21) as they posted 14 videos in just 12 hours.
TV & VIDEOS・11 DAYS AGO
TMZ.com

6:15 AM PT -- We got video of Kim, Kanye and North posing together at the show, in front of the giant stature of Abloh. It's clear Virgil, and his legacy, meant more to the former couple than any current issues they may have in their own relationship. Virgil Abloh...
BEAUTY & FASHION・6 DAYS AGO
Us Weekly

Even the stars take a tumble every once in a while! Jennifer Lawrence, Kim Kardashian and Michael B. Jordan are just a few celebrities who’ve completely wiped out while the cameras have been rolling. The American Hustle actress had a series of slipping spells in February 2013 while she was...
CELEBRITIES・6 DAYS AGO