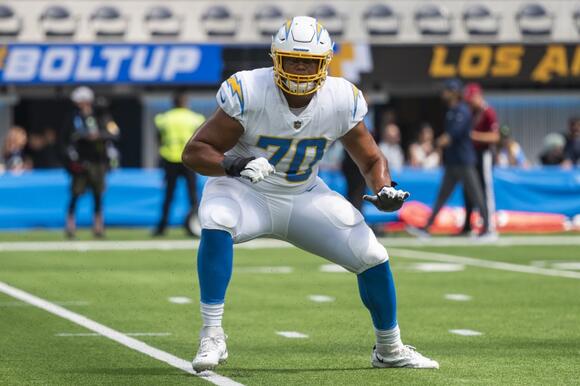 Breaking down how the Chargers (3-1) and the Cleveland Browns (3-1) match up heading into their game at 1:05 p.m. Pacific time Sunday at SoFi Stadium . The game will be carried on CBS (Channel 2).

When Chargers have the ball: Most prominent among the offseason upgrades for the Chargers has been the offensive line, which — with right tackle Bryan Bulaga (back) on the injured reserve list — has five different starters than a year ago. Veteran center Corey Linsley and rookie left tackle Rashawn Slater have led the group, both ranked among the top 10 at their position by Pro Football Focus. Cleveland, however, arrives with what Chargers coach Brandon Staley called “one of the elite [defensive] fronts in the league.” The Browns feature end Myles Garrett, who is ranked No. 3 at his position by PFF. Garrett entered Week 5 leading the NFL with six sacks. “I don’t know if there’s a better defensive end pass rusher in the NFL,” Chargers offensive coordinator Joe Lombardi said. “He’s a guy that can ruin your day by himself very quickly.” Garrett figures to seek out right tackle Storm Norton, who is filling in for Bulaga and will be making just his seventh NFL start. Quarterback Justin Herbert’s ability to feel pressure and get rid of the ball quickly figure to again be keys to the Chargers sustaining possessions. Austin Ekeler is coming off a career game running the football, finishing with a 117-yard performance against Las Vegas. Cleveland’s defense is third best against the run and pass, and fourth in points allowed. The Chargers will have to earn what they get in this game.

When Browns have the ball: Coach Kevin Stefanski’s ideal afternoon would have Cleveland take an early lead, maintain the advantage into the fourth quarter and then pound the Chargers into the ground with Nick Chubb and Kareem Hunt. The Browns’ top two running backs are well known for creating yards after taking the initial hit. “These two guys are as good as it gets on contact,” Staley said. “That’s what the data will tell you.” The Chargers significantly tightened their run defense Monday against the Raiders, surrendering only 48 yards and two first downs on the ground. But this Cleveland duo is another level of challenge, even as the Browns deal with injuries along their offensive line. Quarterback Baker Mayfield had his poorest game of the season last weekend. It also recently was revealed that he has been dealing with an injury to his left (nonthrowing) shoulder. Odell Beckham Jr., who missed the first two games because of a knee injury, had only two catches for 27 yards last weekend at Minnesota. Staley still called him “an incredible creator with the football.” Chargers fans haven’t had to worry much about Beckham. He has played only once against the Chargers — in 2017 as a member of the New York Giants. Beckham finished that day with five receptions for 97 yards and a touchdown.

When they kick: The Chargers’ Tristan Vizcaino is six for seven on field-goal tries and seven for nine on extra points. Chase McLaughlin, a former Charger, has made all 16 — seven field goals and nine extra points — of his attempts.

Jeff Miller’s prediction: The Chargers have some significant confidence after victories at Kansas City and over Las Vegas. They double-down on that confidence in this spot.

“SHOCKING”: NFL Twitter furious after Cam Heyward punches Justin Herbert in the stomach during the Steelers vs Chargers game

After an agonizing loss against the Bears by a deficit of two points, the Steelers were desperate for a win. However, they again failed to get the better of the opposition under extreme pressure in their next game against the Lions which ended in a tie. Needless to say, the...
NFL・14 DAYS AGO
Sports Illustrated

Discover player props odds, plays, and insights for Justin Herbert in his Week 12 contest with the Los Angeles Chargers against the Denver Broncos.
NFL・8 DAYS AGO
Sporting News

The wildest play in the fourth quarter of Sunday night's Steelers-Chargers game wasn't any of the five touchdons scored in the period. It was LA quarterback Justin Herbert's 36-yard scramble — and what happened to him after he was tackled. A prone Herbert took a shot to the midsection from...
NFL・13 DAYS AGO
Daily Breeze

INGLEWOOD — Chargers quarterback Justin Herbert had the Pittsburgh Steelers frustrated with timely runs and was punched in the stomach by defensive tackle Cam Heyward after a 36-yard run in the fourth quarter. Heyward wasn’t ejected for the double punch and it didn’t take long before he was the one...
NFL・14 DAYS AGO

The Los Angeles Chargers were reeling. The Pittsburgh Steelers had scored 27 points in the fourth quarter to take the lead in the final minutes of the fourth quarter. Justin Herbert kept his cool and found Mike Williams for a 53-yard touchdown just when despair was in the air for the Bolts’ fans at SoFi Stadium on Sunday.
NFL・14 DAYS AGO
prosportsoutlook.com

For a notoriously snakebitten franchise like the Los Angeles Chargers, it appears that they have found the franchise QB they need to lead them back to prominence. In just his second season, Justin Herbert has shown that he can do exactly that, putting up elite numbers in the Chargers’ 41-37 win over the Steelers on SNF. Adversity hit LAC when PIT mounted a massive comeback, but Herbert’s poise and resolve could be a sign of good things to come, as it could make him the franchise’s greatest QB.
NFL・14 DAYS AGO
CBS Sports

Justin Herbert has done some incredible things in his first two years in the NFL, yet had the greatest performance of his career Sunday night. Herbert completed 30 of 41 passes for 382 yards with three touchdowns to just one interception (116.1 rating) while rushing nine times for 90 yards in the Los Angeles Chargers' thrilling 41-37 victory over the Pittsburgh Steelers -- accomplishing a feat no quarterback in NFL history has reached.
NFL・13 DAYS AGO
fantasypros.com

Chargers QB Justin Herbert completed 30-of-41 passes for 382 yards while tossing three touchdowns and one interception in the Chargers Week 11 win against the Steelers. He also rushed the ball nine times for 90 yards. Fantasy Impact:. Herbert was fantastic this game and shredded the Steelers defense in this...
NFL・13 DAYS AGO

Pat Surtain II made a huge play for the Broncos early in the fourth quarter. With the Chargers on third-and-14 and threatening, quarterback Justin Herbert threw a pass to the end zone. Unfortunately for him, the Broncos’ rookie cornerback was there to make the pick. Denver led 14-7 at the...
NFL・7 DAYS AGO
Sporting News

A message to Justin Herbert: Go with the flow. Herbert is known for two things: His dynamic on-field play for the Chargers, and his even more dynamic head of hair inside that helmet. So when he lopped the luscious locks off just over a year ago in 2020, it sent NFL fans into a tizzy.
NFL・14 DAYS AGO
USA TODAY Sports Media Group

It wasn’t a Hail Mary but it night as well be considered one. Justin Herbert had been having a rough time against the Denver Broncos and the Los Angeles Chargers were down 21 on Sunday. Herbert was running out of time and space when he heaved the ball to the...
NFL・7 DAYS AGO

Despite being flagged for unnecessary roughness against Los Angeles Chargers QB Justin Herbert last Sunday, Pittsburgh Steelers’ DL Cam Heyward will not be fined for the incident in which in appeared Heyward to have punched Herbert. NFL Network’s Ian Rapoport tweeted the news. After tackling Herbert following a long, 36...
NFL・8 DAYS AGO
ClutchPoints

The Los Angeles Chargers took one on the chin Sunday, losing to the Denver Broncos 28-13 in Mile High Stadium. The Chargers played sloppy football, struggling for consistency offensively and failing to stop the ground game once again defensively. Los Angeles quarterback Justin Herbert addressed the media after the loss.
NFL・7 DAYS AGO
Bengals.com

Bengals quarterback Joe Burrow says he doesn't stack himself up against other NFL quarterbacks, but that won't stop everyone else from doing it Sunday at Paul Brown Stadium (1 p.m.-Cincinnati's Channel 19) against the Chargers when he duels 2020 draft classmate Justin Herbert. And the matchup is right up the...
NFL・4 DAYS AGO
Long Beach Press-Telegram

COSTA MESA — Chargers quarterback Justin Herbert praised his offensive line’s toughness after the team’s frustrating loss against the Denver Broncos last weekend. Not many outside of the Chargers’ organization agreed with Herbert’s assessment of the offensive line’s performance in Denver, but his words might have best summarized the predicament the team faced in the pivotal AFC West matchup.
NFL・2 DAYS AGO
wkrq.com

If you had the Bengals in the playoff conversation the first week of December well you win. It’s December 2nd and the Bengals are playing like not only the best team in the AFC North, but the AFC conference. The club came out of the bye and they are rolling...
NFL・3 DAYS AGO
playerprofiler.com

The San Die… The Los Angeles Chargers and Cincinnati Bengals last played in the season opener of 2020. it was a lackluster 16-13 game. This was Joe Burrow‘s debut. Meanwhile Justin Herbert hadn’t yet gotten the opportunity to lead the Chargers onto the field. Both teams have clearly improved since this game. We also get two of the top fantasy running backs in the league this year with Joe Mixon (No. 3) and Austin Ekeler (No. 2) in fantasy points.
NFL・1 DAY AGO
Yardbarker

The Bengals play the Chargers on Sunday with both teams hoping to keep pace in the AFC Playoff race. Cincinnati is 7-4 and currently the fifth seed. Meanwhile Los Angeles is the seventh seed with a 6-5 record. Sunday's game will also be the first time Joe Burrow and Justin...
NFL・1 DAY AGO