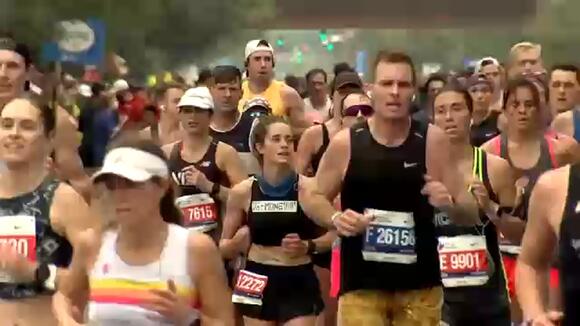 It's been 728 days since runners lined up for the Chicago Marathon, so excitement was high in Chicago Sunday for the event. After a pandemic enforced hiatus last year, some 33,000 runners took to the streets Sunday to run the 26.2 mile circuit, with many more lining the streets from north to south to cheer their loved ones on. Seifu Tura Abdiwak of Ethiopia and Ruth Chepngetich of Kenya have won in the return of the Chicago Marathon. Abdiwak finished in 2 hours, 6 minutes, 12 seconds. Galen Rupp was second in 2:06:35, followed by Kenya's Eric Kiptanui with a time of 2:06:51. Chepngetich took the women's race, finishing in 2:22:31. Emma Bates of the U.S. was second at 2:24:20. "They're amazing. They're so inspiring," said Monica Jaimovich. "I got so emotional when they came down. I was on LaSalle, now I'm on Wells. I was like, crying." The event was virtual last year, so the energy and excitement on the streets was off the charts for the return of the popular race. It was a tough one, however, with the heat and humidity rising to a level which prompted organizers to increase the alert to red. The warmer conditions was something people may not have expected in October, but event organizers were well prepared with lots of extra fluids along the course. "It's one of the hardest races I've don because the heat overall was, not unbearable but we made it through," said marathon finisher Jesse Spellman. "It's supposed to be cold in Chicago, but 78 and humidity that's not fun!" RELATED: Chicago Marathon 2021: Thousands set to run 26.2 miles with COVID protocols in place

Chicago Marathon weekend events got started Saturday with the Abbot 5K race, which began in Grant Park and goes through the Loop.

It wouldn't be the first time, though. Back in 2007, it got so hot that some runners even passed out. However, the race directors said everyone was prepared to avoid a situation like that. "There's some athletes that are prepared for it, (and) I think its gonna be part of it, but we're well aware of it and we'll prepare for it," race director Carey Pinkowski said. A few changes to the race this year include no bleachers at the finish line in Grant Park. There was also be 25% fewer runners than 2019. Chicago Marathon offers rare chance to run back-to-back with Boston And participants were required to be fully vaccinated or test negative for COVID within 72 hours of the race. For those able to finally achieve their marathon goals, the wait, and the extra hurdles were worth it. "It was really hard. I got injured like six weeks so I didn't do a lot of the training but I was just coming out to have fun," said first-time marathoner Fiona O'Brien. "I love Chicago so much. I got to run past my high school, my church. I got to run past a lot of places that are important to me, so it's a really special day." "There was so much enthusiasm at the beginning. On the north side people were cheering, going crazy. The spectators were fantastic," said Chicago Marathon finisher Mitchell Sandy. "It was my 30th consecutive Chicago Marathon, so it feels good," said Jim Jenness, a charity runner for Mercy Home for Boys and Girls. "I'm 75 years old so I'm the young guy in my age group, so it will be interesting to see how I did." One onlooker spoke of his daughter who ran her eighth marathon Sunday. "It's been wonderful to see her do this. It's just really wonderful what a great athlete she is and how dedicated she is and how hard she works at it and how much she enjoys it," he said.

Street closures in the Grant Park area began on Monday with the closure of Balbo from Columbus to DuSable Lake Shore Drive at 10 a.m. Additional street closures for race day at the start/finish line area can be expected through the weekend, including: Thursday, Oct. 7: Columbus Drive from Roosevelt to Ida B. Wells closed, reopen on Monday, Oct. 11 at 6 a.m. Friday, Oct. 8: Columbus Drive from Ida B. Wells to Monroe closed at 4 a.m. and reopen on Sunday, Oct. 10 at 8 p.m. Saturday, Oct. 9: Columbus Drive from Randolph to Monroe Street will be closed at 6 a.m. and open on Oct. 10 at noon. All streets will fully reopen by Monday, Oct. 11 at 6 a.m. For more information about the marathon, including a map of its route, visit chicagomarathon.com . The Associated Press contributed to this report.

Chicago leadership have started preparing for the Omicron COVID-19 variant to arrive by encouraging people to get vaccinated.
CHICAGO, IL・20 HOURS AGO
ABC 7 Chicago

The historian, author and educator died in October at the age of 102.
CHICAGO, IL・16 HOURS AGO
ABC 7 Chicago

The upcoming JDRF One Dream Gala will focus on raising much needed funds for research to one day find a cure.
CHICAGO, IL・1 DAY AGO

The group of aldermen are highly critical of the new Chicago ward map presented on Wednesday, calling it the result of "backroom deals."
CHICAGO, IL・3 DAYS AGO
ABC 7 Chicago

Claire Blasko set out to collect school supplies in the Wilmette area. Her efforts were not only very successful, but have led to big and better things.
CHICAGO, IL・4 DAYS AGO