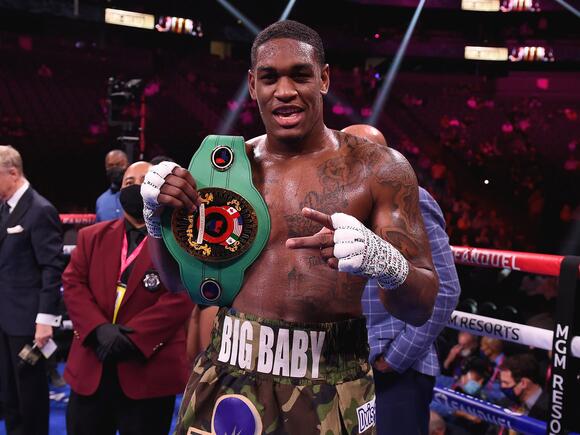 LAS VEGAS — Jared Anderson chalked up another knockout on Saturday in a battle of unbeaten boxers.

The Toledo boxer upped his record to 10-0, all by knockout, by defeating Vladimir Tereshkin via technical knockout in the second round.

“I was a little anxious in the opening round, my first pay-per-view card and all that.” Anderson said. “But I settled in and gave a great performance. I practiced what my coaches preached. On to the next one.”

Late in the second round, Anderson backed Tereshkin into a corner and landed a powerful right hand, followed by a left-right combination -— prompting the official to wave off the fight at the 2:51 mark.

Anderson was fighting an undercard bout ahead of the highly-anticipated main event of Tyson Fury and Deontay Wilder.

“I got great work in the gym with Tyson Fury. Iron sharpens iron,” Anderson said. “Shout out to Toledo, my home. I hope I made the fans back home proud.”

BOWLING GREEN — One game remains on Bowling Green State University’s 2021 schedule, and it’s a favorable matchup against Ohio. Neither team is bowl eligible, and the Falcons are on a two-game losing streak.
OHIO STATE・22 HOURS AGO
The Blade

BOWLING GREEN — It was somewhat poetic that the final converted field goal from jersey No. 39 was made from 39 yards out. Talk about a moment of clarity. Nate Needham entered the Bowling Green State University football program as a could-be. He turned into a may-be, and after completing his senior season on a high note in his final home game, he definitely was.
BOWLING GREEN, OH・11 HOURS AGO
The Blade

A flurry of furry stuffed animals flew from the stands at the Huntington Center on Friday night at the Toledo Walleye's annual charitable event. The Walleye then scored a flurry of goals late in regulation and in overtime to drop the Indy Fuel 4-3.
NHL・5 HOURS AGO
The Blade

BOWLING GREEN — Maybe the interception by Deshawn Jones, Jr., at the end of regulation on Friday is a sign of things to come. In the grand scheme of things, the matchup between 3-8 teams was insignificant. But in Scot Loeffler’s locker room, the game meant an opportunity to fulfill a goal of building momentum for his young Bowling Green State University team into the offseason.
OHIO STATE・11 HOURS AGO

Jonzell Norrils is coming home. The University of Akron running back and Central Catholic graduate will face the University of Toledo on Saturday at the Glass Bowl in the regular-season finale.
TOLEDO, OH・1 DAY AGO
The Blade

Bowling Green State University defeated Ohio University, 21-10, during a Mid-American Conference football game on Friday at Doyt Perry Stadium in Bowling Green. Click on the image above and use the left and right arrows to view the entire gallery.
OHIO STATE・13 HOURS AGO
The Blade

Despite heavy losses of talent to graduation, Toledo Christian remains the favorite to win a fifth consecutive Toledo Area Athletic Conference title. The cupboard is far from bare for the Eagles, who reached the Division IV regional semifinals last season before falling to Convoy Crestview.
TOLEDO, OH・10 HOURS AGO
The Blade

BOWLING GREEN — Bowling Green took advantage of an Ohio miscue for points and took at 13-10 lead midway through the third quarter. Ohio punter Jonah Wieland dropped a snap and was tackled by BGSU's JB Brown for a 6-yard loss, giving the Falcons the ball at the Ohio 28. Nate Needham kicked through a 43-yard field goal to give the Falcons a 13-10 lead with 4:06 left in the third.
OHIO STATE・17 HOURS AGO
The Blade

Just like that, Toledo is readying for the final game of the regular season. Where did the time go?. It seems like yesterday that the Rockets opened up the season in front of a raucous Saturday night crowd amid the Solheim Cup hoopla. UT won that night in the pouring rain against Norfolk State, and a similar result is expected Saturday against lowly Akron.
TOLEDO, OH・1 DAY AGO
The Blade

It took all of 18 seconds for Northview’s Sean Craig to set the Wildcats’ career scoring record in Friday’s season opener at Woodward, a 92-45 victory for Northview. Craig, a senior who has signed with Indianapolis, hit a 3-pointer off a pick-and-roll to eclipse Aerin West’s mark of 1,164 points.
TIFFIN, OH・6 HOURS AGO
The Blade

CANCUN, Mexico — The University of Toledo women's basketball team fell 68-63 in overtime to Seton Hall on Friday at the Hard Rock Hotel Riviera Maya. Toledo (3-2) took the lead with less than three minutes left in regulation, but two late free throws by Seton Hall (3-2) tied the score at 57, sending the game into overtime.
TOLEDO, OH・9 HOURS AGO

The Napoleon girls basketball team became the first Northern Lakes League program to ever win a state championship last season, and the Wildcats are expected to be the conference's top team once again.
NAPOLEON, OH・1 DAY AGO
The Blade

PARADISE ISLAND, Bahamas — Life at the Power Five level didn’t start out so easy for Marreon Jackson. The four-year Toledo standout transferred to Arizona State after the 2020-21 season, with an eye on his NBA draft stock and experiencing a Cadillac conference.
ARIZONA STATE・2 DAYS AGO
The Blade

RIVIERA MAYA, Mexico — The University of Toledo women’s basketball team used strong first and third quarters to power its way to a 79-58 victory over Idaho State on the first day of the Cancun Challenge on Thursday.
TOLEDO, OH・1 DAY AGO
The Blade

BOWLING GREEN — The Bowling Green State University football team is seeking momentum heading into its offseason. Friday’s game against an up-and-down Ohio team can give the Falcons that.
BOWLING GREEN, OH・1 DAY AGO

Hendel: Thankful for abundance ... and for brotherly love

You may be watching the holiday parades while prepping for a big feast at your home, or perhaps you are going out to dinner with family and friends for which we are all thankful.
TOLEDO, OH・1 DAY AGO
The Blade

BOWLING GREEN — One final over-arching question remains for Bowling Green State University football in 2021. The Falcons have lost two in a row entering their season finale, but could earn a win in its final game of the season against an Ohio team that’s also 3-8 overall, but is 3-4 in Mid-American Conference play.
OHIO STATE・2 DAYS AGO
The Blade

State championship trophies for the 2021 high school football season won’t be awarded until next weekend in Canton. However, coaches around the state are already starting to draw up plans for what’s ahead in 2022.
TOLEDO, OH・2 DAYS AGO
The Blade

EUCLID, Ohio — Port Clinton was playing in the biggest game in program history. Twice the Redskins’ defense made huge stops to get Port Clinton back in the game. It felt as if the Redskins needed one more stop and score and they would have been in control.
PORT CLINTON, OH・6 HOURS AGO