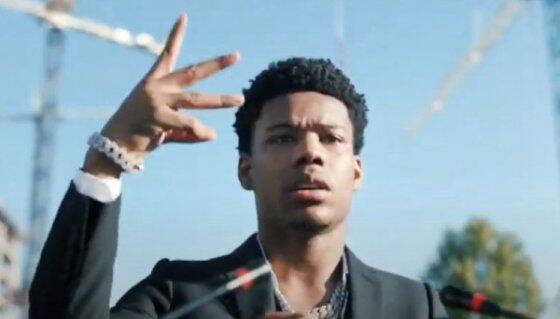 Nardo Wick already had one of the top heaters of 2021 with his sinister “Who Want Smoke?” single that landed the 20-year-old rapper on the map. Now, the Jacksonville, Fla. native enlisted the services of 21 Savage , G Herbo , and Lil Durk for the remix for the single, and Twitter has launched into a serious debate.

Nardo Wick is still prepping his presumably soon-to-come debut album and if it’s any indication, the remix to “Who Want Smoke?” featuring EMKAY’s blistering production sounds like the project will deliver.

For the remix, Nardo opens up on the first verse and then makes way for Lil Durk after the infectious hook passes by.

Here is a portion of Lil Durk’s verse:

They be on my page like, “Slide for Von,” I know they trollin’ me
Outside with your big homie be on, I keep them folks with me
Got it back in blood, y’all just don’t know, that’s how it ‘posed to be
Call him for a feature just to kill him ’cause we know he sweet
Uh, uh-uh-uh-uh, who the f*ck is that?
Bro gon’ check the door, look out the window, don’t forget the strap
I be on they ass, when I see opps, I do forget I rap
I be on this shit wherever I’m at, I learned that from the ‘Raq

To be completely fair, 21 Savage’s verse is strong as much of his features are, but it goes without saying that Herbo and Durk are the talk of the moment.

Here is a portion of G Herbo’s verse:

I be with real killers, I’m a rappin’ street n*gga
Copy, paste, delete n*ggas
Can’t wait ’til we see n*ggas
Who want smoke? It’s free
All the oppers sweet, Swishers
Hop out middle of the street, hit him
Soon as he fall off his feet, kill him
Been out all week, seen three R.I.P. pictures
All my shooters, all eat
You can tell that we richer
Pull up ballin’, swish, been on all the hits
Now I’m all legit (All legit), shout out Nardo Wick, b*tch

Check out Nardo Wick’s “Who Want Smoke” remix along with the video below and you be the judge. Keep scrolling to see reactions.

We respect the honesty.

G Herbo, a star in his Chicago hometown and a steady fixture of the drill subgenre, felt out of place during his brief Sunday night show at the Muse Event Center in Minneapolis. Born Herbet Randall Wright III, the rapper built his popularity on the South Side of Chicago (“Chi-Raq”...
MINNEAPOLIS, MN・6 DAYS AGO
rapradar.com

Five months after dropping the single, Houston DJ and producer Beatking releases the accompanying video to “SDAB” featuring 2 Chainz and Juicy J. In the whimsical clip, Beatking’s depicted as a roach, while his collaborators commandeer a plethora of ladies drop it low and twerk. hilot. Making money online more...
CELEBRITIES・4 DAYS AGO
2dopeboyz.com

Florida’s Nardo Wick has been rising through the ranks, with his song “Who Want Smoke” gaining traction for both the right and (unfortunately) wrong reasons. Set to release his debut studio album Who is Nardo Wick? on December 3, he connects with Future and Lil Baby for his latest single “Me or Sum.”
MUSIC・9 DAYS AGO
HipHopWired

Check out the rest of today’s drops and some joints you might’ve missed over the weekend including work from Young Buck, Sean Paul featuring Sia, and more.
CELEBRITIES・8 DAYS AGO

Fans are rallying around the Washington, D.C. native after she posted and deleted some troubling messages while traveling on tour with Playboi Carti.
CELEBRITIES・9 DAYS AGO
hypebeast.com

Nardo Wick Answers The Question 'Who Is Nardo Wick?' in Debut Album

19-year-old Nardo Wick has officially dropped off his debut studio album, Who Is Nardo Wick?. Clocking in at almost 50 minutes, the 18-track record features guest appearances from the likes of Hit-Boy, Future, Lil Baby, 21 Savage, G Herbo, Lil Durk, BIG30 and Lakeyah, and arrives after the success of his 2021 singles “Who Want Smoke?,” “Shhh,” “Pull Up” and “I Be Chillin.” The album poses the question Who Is Nardo Wick? and the Jacksonville, Florida rapper answers it with authenticity and effervescence — an aura of legitimacy accompanies the 18 tracks and allows Nardo Wick to shine alongside the big names he has found himself in, proving that he is ready to ride the wave.
JACKSONVILLE, FL・5 DAYS AGO
Complex

We’re a little less than a month away from the new year, but artists are still dropping new music until the time runs out. This week, Polo G and Lil Baby teamed up for their latest collaboration “Don’t Play.” NBA YoungBoy is back with one of his most vulnerable tracks yet, “Heart and Soul.” And Ariana Grande and Kid Cudi teamed up for their new ballad “Just Look Up,” which appears in the new film Don’t Look Up. This week’s list also includes new songs from Nardo Wick, SZA, EST Gee, and more.
MUSIC・4 DAYS AGO
inthrill.com

Lil Nas X's album may have sounded a little different. The 22-year-old artist reveals in a new GQ interview that Nicki Minaj and Drake were the only artists to decline him on Montero, and the songs he wanted them on. "I don’t usually ask for features like that. But for...
MUSIC・22 DAYS AGO
rapradar.com

After making a recent public appearance in Barbados, fans on Twitter began speculating if the famed singer and businesswoman were pregnant but nothing publicly stated points to the confirmation that she is expecting.
BEAUTY & FASHION・5 DAYS AGO
hotnewhiphop.com

Following a week of complete inactivity for music releases during the Thanksgiving holiday, everything picked back up with single drops from SZA, Brent Faiyaz, and more last week. Hip-hop was in for a treat at the end of the week too because we got full-length releases from Nardo Wick, Lucki (with production from F1lthy), EST Gee, Polo G, and more.
MUSIC・1 DAY AGO

50 Cent is a busy man these days. Fresh off the season finale of his popular BMF show, the television mogul’s Power Book II: Ghost continues to dominate at STARZ. Meanwhile, Fif just confirmed another Power spin-off is in the works titled Power Book IV: Force. The next chapter in...
CELEBRITIES・8 DAYS AGO
92.7 The Block

Part of our duty as a publication and crew is to school the masses on who is doing what musically and there’s no better way to do that beyond our CRT FRSH (Certified Fresh) bi-weekly playlist.
ENTERTAINMENT・2 DAYS AGO
HipHopWired

We already knew, but we finally get to hear Ryan and Miss Kitty confirm their worst-kept secret.
NEW YORK CITY, NY・8 DAYS AGO
HipHopWired

Teyana Taylor Taken To Emergency Room For Exhaustion Prior To Concert

Teyana Taylor has been reminded that her body does have limits. She was recently taken to the emergency room prior to a show. As spotted on Page Six the Harlem, New York native was taken to a hospital on Sunday, November 28. She took to her Instagram account to let her friends, family and fans know her […]
NEW YORK CITY, NY・8 DAYS AGO
HipHopWired

Omarion Trending Because Of Omicron Variant, Black Twitter Chimes In With Jokes

Using humor as a means to cope, Black Twitter has R&B singer Omarion's name trending as a result and while this is a serious situation, the reaction induced some chuckles.
INTERNET・7 DAYS AGO
HipHopWired

Cardi B has added yet another notch to her already star studded belt. She is the female rapper to have multiple songs go diamond which is a pretty big deal. As spotted on Complex the Bronx bombshell’s week is already off to a great start. On Monday, November 29 she found out that her collaboration with […]
BRONX, NY・6 DAYS AGO
hotnewhiphop.com

Freeway Says He's The First Rapper With A Beard Diamond, Shows Off Gem In Video With Soulja Boy