Listen to a snippet of Adele's 'Easy On Me,' her first new song in 6 years 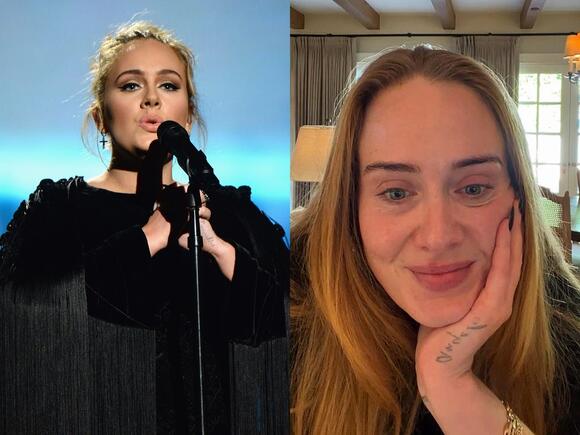 Adele teased the return of her show-stopping vocals with a sneak-peak of "Easy On Me," the lead single from her highly anticipated fourth album.

The Grammy-winning singer surprised fans with a snippet during an Instagram Live appearance on Saturday, one week before the song's scheduled release date of October 15.

"Might get in trouble for playing it," she joked before pressing play on the piano ballad.

The first verse includes heart-wrenching lyrics, which presumably reference her recent divorce: "There ain't no gold in this river / That I've been washing my hands in forever."

"I know there is hope in these waters / But I can't bring myself to swim / When I am drowning in this silence / Baby, let me in," she sings before breaking into a swooning chorus, when Adele abruptly cut the song off.

Adele, 33, recently told British Vogue that she wrote the song in 2018 about the dissolution of her marriage to Simon Konecki, the founder of the charity Drop4Drop and father of her 8-year-old son Angelo.

"I just felt like I wanted to explain to him, through this record, when he's in his twenties or thirties, who I am and why I voluntarily chose to dismantle his entire life in the pursuit of my own happiness," she said of her son. "It made him really unhappy sometimes. And that's a real wound for me that I don't know if I'll ever be able to heal."

Adele and Konecki finalized their divorce earlier this year. She is currently dating 39-year-old sports agent Rich Paul, which she confirmed to British Vogue.

"I did date before Rich, but they hated it," she said. "They'd find it stressful being out or seen with me, which meant that I guarded all of it beyond. It never evolved because we were never experiencing things together. Whereas he's not frazzled by it at all."

"Easy On Me" will be Adele's first new song in nearly six years. Her last release was her third album, "25," released in November 2015, which won the Grammy Award for album of the year .

Adele opened up about her relationship with her father during an interview with Oprah Winfrey.During the conversation, which aired on Sunday (14 November) on CBS in the US, Adele said her father, Mark Evans, didn’t listen to her music for years.The only song he had listened to, she said, was her 2007 single “Hometown Glory”.“He was like, it’s too painful. He would switch it off and he never ever played any of my other music,” Adele told Winfrey.The situation changed shortly before Evans’s death of bowel cancer in May this year.In April, Adele and her father were able to...
MUSIC・13 DAYS AGO
thatgrapejuice.net

With Adele’s new album ’30’ dominating on a global scale, the superstar took center stage for a special presentation at this evening’s NRJ Awards 2021 in Paris, France. There, the 33-year-old thrilled with a powerful performance of the project’s chart-topping lead single ‘Easy On Me.’. Watch the British belter in...
CELEBRITIES・7 DAYS AGO
HollywoodLife

Adele took to social media to share a new live video of herself belting out the lyrics to her new song ‘To Be Loved’ from her upcoming album ’30’ with her incredible vocals and soft piano in the background. Adele, 33, had fans in awe on Nov. 17 when she...
LOS ANGELES, CA・10 DAYS AGO
Entertainment Weekly

Adele takes her signature brand of musical heartache to new depths on a new song that sees the pop icon lay bare her raw feelings on divorce in an emotional recorded conversation with her nine-year-old son. The third track on the singer's latest album, 30, includes a heartbreaking interlude featuring...
MUSIC・9 DAYS AGO

Adele releases '30,' including a bonus version of 'Easy On Me' featuring Chris Stapleton
MUSIC・9 DAYS AGO
Daily Mail

Adele is back to delight her fans in the UK with a TV special where the hit singer will perform her biggest songs for a star-studded audience in London. Just days after releasing her fourth studio album, 30, Adele will be back on our TV screens in a one off special filmed at the London Palladium earlier this month (November 6).
CELEBRITIES・7 DAYS AGO
eastidahonews.com

(CNN) — An Australian TV journalist has apologized for failing to listen to Adele’s new album ahead of an interview with her. Matt Doran, who co-hosts “Weekend Sunrise” on the country’s Channel 7, traveled to London with a camera crew for an exclusive interview with the British singer songwriter. The...
WORLD・5 DAYS AGO
CNN

Adele wants you to listen to her album in order, and Spotify agrees

(CNN) — When it comes to her art, Adele has a certain way she likes things to be done. The singer believes the tracks on an album should be listened to in their order of arrangement -- and now she's got streaming giant Spotify onside. Following the release of her...
MUSIC・7 DAYS AGO

Adele Tries to Explain Her Divorce to Son, 9, in Voice Notes on Emotional Song from New Album 30

Adele is giving listeners an inside look at how she spoke to her young son about one of the most difficult periods in her life. On Friday, the 33-year-old singer released her fourth studio album 30, which follows previous works from the star including 2008's 19, 2011's 21 and 2015's 25.
RELATIONSHIPS・9 DAYS AGO
Elle

Adele debuted a new song, “I Drink Wine,” during her One Night Only TV concert special tonight. The soulful, bluesy composition conveys the struggles in a relationship and the efforts that go into making it work. “You better believe I'm trying to keep climbing / But the higher we climb, feels like we're both none the wiser,” she belts out in the refrain.
MUSIC・13 DAYS AGO
HollywoodLife

Adele’s Son Angelo, 9, Questions Her ‘Love’ For Him In New Song ‘My Little Love’

Adele’s new album is here, and one of the most poignant moments on ‘30’ is a song that features her and Simon Konecki’s 9-year-old son discussing their heartbreaking divorce. Even before 30 arrived, fans knew that Adele’s album was going to be an emotional rollercoaster. Not only was it her...
MUSIC・9 DAYS AGO
thatgrapejuice.net

Hot 100: Taylor Swift Set to Unseat Adele’s ‘Easy On Me’ With Historic #1 Debut of ‘All Too Well’

While the red hot commercial performance of Taylor Swift‘s latest effort – the re-release of her fourth studio album ‘Red’ – is set to be accompanied by a number of history-making accolades, two tower above the rest. See what they are inside:. As we reported here, ‘Red (Taylor’s Version)’ has...
MUSIC・9 DAYS AGO

Adele took to social media to share a new live video of herself singing her latest song ‘To Be Loved’ from her upcoming album ’30’. Adele, 33, posted the live video on Twitter, showing the singer sitting down in what appeared to be her living room in the clip, with just a piano playing in the background, accompanying her vocals. She wore an all black outfit and had her hair pulled back as she closed her eyes and brought the tune to life. “To Be Loved,” she simply captioned the video that she shared to her page.
MUSIC・10 DAYS AGO
Daily Mail

'No one's playing that!' Adele hilariously reveals her record label made her scrap FIFTEEN MINUTE version of her song I Drink Wine

Adele has revealed one of her latest tracks, I Drink Wine, was originally a whopping fifteen minutes long before it was edited down to just over six minutes. Admitting her record label made her scrap the original masterpiece since 'no-one would listen', the singer, 33, has made the tune the second single from her new album, 33.
MUSIC・8 DAYS AGO
Black America Web

The 'Easy On Me' singer names the most emotional song in her new album '30' and gets candid as to why she probably will never perform the heartbreak track live. AceShowbiz - Don't expect to hear "To Be Loved" when Adele finally returns to touring because the new song is too painful for her to sing live.
MUSIC・4 DAYS AGO
Insider

Adele said she thinks she and Drake are the last of a "dying breed" of "old school artists." The two stars are friends, and Adele said their similar experiences have made them closer. She added that his friendship is "one of the biggest gifts" of her career. Adele said she...
MUSIC・2 DAYS AGO
arcamax.com

Adele is taking the country music business by storm. Much like her Columbia Records labelmate Lil Nas X did in 2019 with “Old Town Road,” the British vocal powerhouse has made it to the country music charts with a superstar collaboration. “Easy On Me” (featuring Chris Stapleton) has debuted at...
MUSIC・2 DAYS AGO
Showbiz411

Adele has put up a preview of her new song, “Hold On,” from her CBS special airing tomorrow night at 8:30pm. Television may break tomorrow night with Adele at 8:30, “Succession” at 9pm, “Yellowstone” at 8pm, and NFL football going on at the same time!. “Hold On” sounds like a...
NFL・14 DAYS AGO
Washington Square News

Listen to this: Beyoncé releases new song ‘Be Alive’

Honestly, we don’t have much to add here. Beyoncé pretty much speaks for herself. This week, we also review new songs by British artist Nilüfer Yanya, indie duo Beach House and Canadian rock band PUP. All this to say, if you’re looking for a variety of genres, we have you covered. Read on for more.
MUSIC・10 DAYS AGO