Turkish Grand Prix live stream: How to watch the F1 qualifying online and on TV today 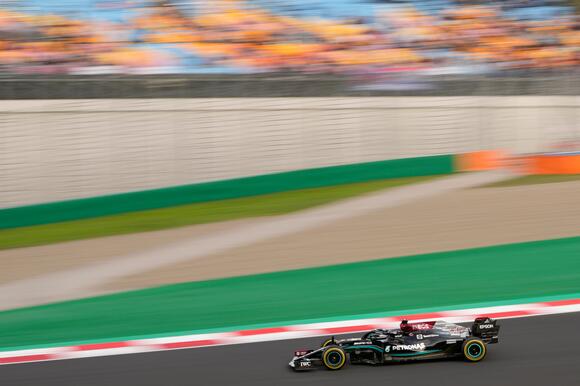 Qualifying at the Formula 1 Turkish Grand Prix is set to be scintillating this afternoon, as the fight for the Drivers’ Championship between Lewis Hamilton and Max Verstappen takes another intriguing turn.

Hamilton will take a ten-place grid-penalty after changing the MGU-H in his Mercedes power unit for this weekend, meaning that he desperately needs to limit the damage by qualifying right at the top of the order if he is to stand a chance of scoring strong points at Istanbul Park.

With eight races left to go, there is precious little margin for error as both drivers go wheel-to-wheel in one of the most sensational title fights in years.

McLaren will be looking to recover from the heartbreak of Lando Norris’ near-miss last time out at Sochi, with his pole-position in Russia and Daniel Ricciardo’s win in Italy a couple of races back proving that the papaya outfit have taken significant steps forward with their car since the summer break.

Further down the grid, Fernando Alonso is on an impressive run of form and points scoring in the Alpine, while Carlos Sainz will be starting from the back of the grid on Sunday as a result of an engine change.

When is the Turkish Grand Prix qualifying?

Qualifying will start at 1pm BST on Saturday 9 October.

How to watch on TV

How to watch online

Existing Sky Sports customers live stream the race via the Sky Go app on a variety of devices.

NOW customers can watch the race through their £9.99 Day Membership or for a Monthly Membership of £33.99, all without a contract. NOW is available via BT Sport and on most smart TVs, phones and consoles.

What happened last time out?

Max Verstappen started at the back but managed to come home in second-place in the rain, while Ferrari’s Carlos Sainz rounded-out the podium.

What are the standings?

Hamilton was fastest in both of Friday’s qualifying sessions, and could well limit the damage caused by his engine penalty by qualifying fastest here. Verstappen will run him very close, and Norris could well be the nearest man to the two title challengers in third.

Lewis Hamilton is in the midst of the most exciting Formula One title battle in recent memory but insists he is uncomfortable racing in Saudi Arabia highlighting the country’s “pretty terrifying” LGBTQ+ laws.The inaugural race in Jeddah is the penultimate grand prix of the 2021 season in which reigning champion Hamilton and Red Bull’s Max Verstappen have tussled for the title.Verstappen is just eight points clear heading into Sunday’s race in Saudi Arabia but Hamilton has the momentum of winning the previous two races for Mercedes.One of those came in Qatar a fortnight ago where the Brit spoke...
MOTORSPORTS・1 DAY AGO
NJ.com

The Qatar Grand Prix, a Formula 1 race featuring Lewis Hamilton and Max Verstappen, takes place at the Losail Circuit Sports Club in Doha, Qatar, on Sunday, November 21, 2021 (11/21/21). Fans can watch the event for free via a trial of fuboTV. Here’s what you need to know:. What:...
MOTORSPORTS・12 DAYS AGO
The Independent

F1 start time: When is Qatar Grand Prix qualifying and what TV channel is it on?

Lewis Hamilton and Max Verstappen’s title race will resume on the track at the Qatar Grand Prix as the Formula One championship contenders battle for pole position ahead of Sunday’s race today. Red Bull and Mercedes looked relatively level following Friday’s practice sessions, with Verstappen topping the first and Hamilton’s teammate Valtteri Bottas going fastest in the second. But the drama at the Losail International Circuit was largely centred around the ongoing disputes between the teams, as Mercedes saw their challenge to re-open the investigation into Verstappen following his incident with Hamilton at the Brazilian Grand Prix dismissed by race...
MOTORSPORTS・13 DAYS AGO
The Independent

And so to Jeddah. In the north of the city tucked against the Red Sea coast is the home of the inaugural Saudi Arabian Grand Prix, dubbed the “fastest street circuit in the world”. The Jeddah Corniche Circuit was completed only last week after an intense eight-month building project, and FIA race director Michael Masi visited to give the track official approval. “The progress that I have seen on each of my visits over recent months has been remarkable,” Masi said. “Jeddah will provide an interesting new challenge for the drivers and teams.”“Interesting” is one word for it. Mercedes’ Valtteri...
WORLD・17 HOURS AGO

The Formula One title might not just be dictated by the two in the running to claim victory overall, but by their team-mates, Martin Brundle says.Lewis Hamilton and Max Verstappen are fighting it out for supremacy at the top of the standings, the Dutchman leading by eight points with two races to go in Saudi Arabia and Abu Dhabi.But how well their partners perform - and directly manage to hold off the No1 racers - is going to have a telling impact, according to Brundle, who backs Mercedes man Valtteri Bottas to fare better than Red Bull’s Sergio Perez.“I honestly...
MOTORSPORTS・1 DAY AGO
Insider

Lewis Hamilton says he doesn't feel comfortable racing in Saudi Arabia over the country's human rights record: 'It's not my choice to be here.'

Lewis Hamilton starts on pole position at the Losail International Circuit, with championship rival Max Verstappen demoted from second to seventh after being found guilty of a yellow flag breach in qualifying. But who will come out on top in the race?. Below you'll find the live timing and our...
MOTORSPORTS・12 DAYS AGO
Autosport Online

Hamilton will start ahead of the Red Bull of Verstappen and his Mercedes teammate Valtteri Bottas after the one-hour qualifying session, which is split into three segments with five cars each being knocked out in Q1 and Q2 before the top-10 shootout of Q3. Qatar Grand Prix qualifying results: Hamilton...
MOTORSPORTS・13 DAYS AGO

The 2021 ISU Grand Prix of Figure Skating Series heads to France for the Internationaux de France this weekend. The French Grand Prix is the next step in the international figure skating schedule, coming off NHK Trophy in Japan, which saw Vincent Zhou take silver. This weekend, we’ll see Jason Brown of the United States in action on the men’s side along with Starr Andrews, Mariah Bell and Karen Chen on the women’s side. This weekend’s coverage will vary in availability depending on the day. Live coverage will be broadcast exclusively on Peacock while Sunday’s recap coverage on TV will be available via NBC, fuboTV and Peacock.
WORLD・14 DAYS AGO
Sporting News

F1 Australian Grand Prix 2022: When, where, how to watch, tickets, COVID updates

Formula 1 returns to Albert Park in Melbourne, where the Australian Grand Prix 2022 will take place following a two-year hiatus due to COVID-19. The dramatic cancellation of the 2020 edition followed by the ongoing global pandemic situation in 2021 has made for a frustrating couple of years for Grand Prix officials.
MOTORSPORTS・8 DAYS AGO
San Diego Union-Tribune

West Ham United are looking to get their top-four push back on track when they welcome Brighton and Hove Albion to the London Stadium this evening. David Moyes’s side have enjoyed a fantastic start to the season, both in the Premier League and the Europa League. However, back-to-back top-flight defeats against Wolves and Manchester City have somewhat halted their momentum. The Hammers remain in fourth, ahead of Arsenal on goal difference, and will be looking to take advantage of the Seagulls’ poor form. Brighton started the campaign in style, too, but have tailed off rather more dramatically and have...
PREMIER LEAGUE・2 DAYS AGO

The head of the Mercedes-AMG Petronas Formula One racing team has apologized for the way the team announced its partnership with a company involved in a London high-rise where a fire killed 72 people
SAN DIEGO, CA・14 HOURS AGO
The Independent

Sports stars and clubs across the world continue to provide an insight into their lives on social media.Here, the PA news agency looks at some of the best examples from December 2.FootballMohamed Salah enjoyed the Merseyside derby pic.twitter.com/HjMrAMKyQa— Mohamed Salah (@MoSalah) December 2, 2021Jordan Henderson sent a message.Merseyside is red. 🔴 pic.twitter.com/Dgh3WW7zfd— Jordan Henderson (@JHenderson) December 1, 2021The excitement was off the chart for James Milner Four goals at Goodison in the derby…and still have my advent calendar to open when I get home 🍫🤤 Carlsberg don’t do Wednesday nights but… 🙌❤️ #Magicmo #whatagoaljots #YNWA pic.twitter.com/TkrbLtNJsf— James Milner (@JamesMilner) December...
PREMIER LEAGUE・1 DAY AGO
The Guardian

Who took over? Who walked away? Who kept going?
TENNIS・20 HOURS AGO
Motorsport.com

Lewis Hamilton topped both practice sessions on Friday at a track that is expected to suit the Mercedes, but Red Bull title rival Max Verstappen was less than two tenths behind him in fourth. Hamilton and Verstappen were separated by Valtteri Bottas in the other Mercedes and the lead AlphaTauri...
MOTORSPORTS・1 HOUR AGO