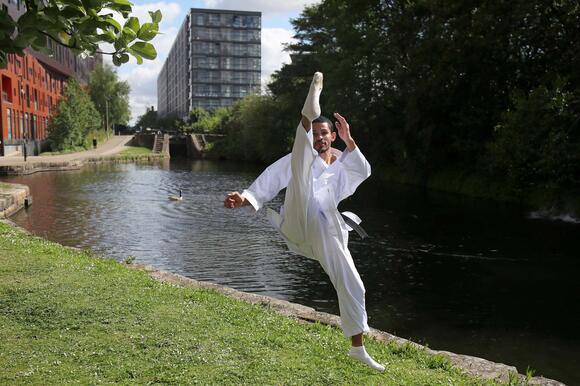 From the age of four, I had one goal. I wanted to be the best in the world at karate . In October 2016, I made that dream a reality when I became England ’s World Karate Federation (WKF) world karate champion at the age of 24 – the first person to take the title for England in 12 years.

But in that same year, a new dream was born. Karate was announced as one of the new events for the 2020 Olympics in Tokyo. From that moment on, I knew everything I had worked for was for this – something which until now had always been unattainable in karate. Olympic gold had become a possibility.

In 2017, I became a fully-funded athlete for Team Great Britain and moved from Bedfordshire to Manchester to train full time. I ate, drank, slept and dreamed of karate. My partner moved to Manchester and everything we did was to ensure I was fit and ready for the Olympics. I missed countless weddings, birthdays and parties and made sacrifices I cannot even begin to describe.

Fast forward to now and here I am, trying to explain how much I wanted this, so you can understand how crushing it was when I didn’t get it. When I took a kick to the head, two seconds before the end of a match at the Olympic qualifying competition, I lost the most important fight of my life. Devastated doesn’t even cut it.

I was a totally broken man with what felt like no purpose. How do you come back from that? How do you wake up every morning and motivate yourself to get out of bed and take on the day when your dreams have been snatched away from you?

Well, you don’t for a little while. You grieve for what you lost and what could have been. You acknowledge that a part of you will always hurt a little and may never be the same again. But then you pick yourself back up.

You owe it to all the friends and loved ones who came to competitions across the world to cheer you on; you owe it to your supporters who have shouted your name whilst you fought and waited in queues to have a photo with you; you owe it to the youngsters following in your footsteps, wanting to be the next Jordan Thomas; and most importantly, you owe it to yourself.

A few months later and after a lot of reflection, I am ready to give back to the sport which gave me so much. I am launching the Jordan Thomas Karate Academy to bring martial arts into schools and communities. With the lessons I learned from my losses and the skills I gained in my grief, I will combine teaching the discipline of karate and self-defence with the practice of mindfulness , and helping people to build resilience.

I pledge to equip young people with positive coping strategies that they can take with them and use throughout their adult lives. In the UK, one in four people experience a mental health issue every year, and suicide is still the biggest killer of men under 50.

If I can help just one person cope with the inevitable difficulties life throws at us, I will have achieved more than I would’ve done by winning any number of gold medals.

Lauren Gaskins, a junior at Wilson High School, has advanced to the 2022 National Final Round of the International German Olympics. Gaskins was one of the top 14 students in the United States invited to the competition in Chicago. She qualified through a four-day online competition against 393 students from across the country. On Dec. 3-4, Gaskins will travel to Chicago to participate in the U.S. Final Round of the Olympic pentathlon where her reading, listening, speaking, writing and presenting in the German language will be tested. Gaskins is competing to become one of two Olympic athletes to represent the U.S. next summer in Hamburg, Germany, at the International German Olympiad, which is the largest German competition in the world. The goal of the competition is to make young people around the world enthusiastic about Germany and the German language. Gaskins is an International Baccalaureate student. Her German teacher is Dr. Lucia Huang. For more information about the IB Program at Wilson High, contact Brian Howell This email address is being protected from spambots. You need JavaScript enabled to view it..
SPORTS・8 DAYS AGO
The Independent

Jos Buttler backed James Anderson to play a big role in the Ashes – and beyond – despite England’s decision to stand their record wicket-taker down from the first Test as a fitness precaution.Anderson will be watching from the sidelines and fine-tuning his skills in the nets when the old rivals get their latest battle under way at The Gabba – a game that begins at midnight on Tuesday in the UK.England insist he is fit enough to play, despite reports of a calf niggle, but have opted to take a pragmatic approach to their 39-year-old seamer.With five Tests squeezed...
SPORTS・14 HOURS AGO
The Guardian

Marianela Núñez: ‘What lockdown taught me, one more time, is that dance is my true passion’

It’s been an oddly fractured year for dance. Repeated lockdowns stifled talent, thwarted new ideas. Online and outdoor offerings provided some release but when theatres reopened in May, dancers emerged as if from hibernation, full of life, anxious to get on with their notoriously short careers. None more so than...
THEATER & DANCE・18 HOURS AGO
The Independent

England vs Australia LIVE: England all out for 147 - follow latest Ashes cricket score and updates

Follow live coverage as England and Australia begin the Ashes with the first Test in Brisbane.England won the toss and elected to bat, but were all out before tea time on day one with a dreary total of 147. Australia's Pat Cummins claimed a 5-ver for 38 on his Test captaincy debut, which began with overseeing a complete collapse of England’s top order — stumbling to 29-4. There was a brief rally led by Haseeb Hameed and Ollie Pope to go in to lunch on 59. But the second session started as badly as the first, and though Jos...
SPORTS・2 HOURS AGO

Kaillie Humphries won bobsled gold at 2010 and 2014 Olympics, as well as a bronze at 2018 Games, while representing Canada, where she was born.
CARS・1 DAY AGO
San Diego Union-Tribune

Sofia Goggia exclusive: "My daring skiing is like a piano sonata"

Olympic downhill champion Sofia Goggia is ready for the first two World Cup downhill events of the new season that will be held in Lake Louise, Canada, from 3-4 December. Goggia, 29, is coming off an impressive season that saw her win four downhill races en route to winning her second World Cup. With 32 podium finishes and 11 wins, the native of Bergamo is now within range of matching Isolde Kostner, the most successful Italian downhill skier in World Cup history (Kostner achieved 51 podium finishes and 15 race wins in her career).
SPORTS・5 DAYS AGO
San Diego Union-Tribune

U.S. water polo coaches Adam Krikorian and Dejan Udovicic are staying on through the 2024 Paris Olympics
TENNIS・17 HOURS AGO

One of the five non-league teams in the draw for the third round of the FA Cup has been handed one of the most exciting matches possible: A trip to European champion Chelsea
SAN DIEGO, CA・1 DAY AGO
Insider

Over the last few years fans have seen a lot of WWE Superstars come and go, and in 2020 former NXT Women’s Champion Kairi Sane stopped wrestling and moved to Japan. Sane continued to work as an ambassador for WWE, but now it seems that she could be completely done with the company.
WWE・1 DAY AGO
milwaukeesun.com

Sydney [Australia], December 7 (ANI): The 16 countries set to compete in the third edition of the ATP Cup, which will feature 18 of the top 20 players in the ATP Rankings, were assigned to four groups at the official tournament draw on Tuesday in Australia. "The team event will...
TENNIS・1 DAY AGO
The Independent

England dismissed for just 147 in disastrous start to Ashes tour

England began their Ashes tour in disarray at The Gabba, flopping to 147 all out after opener Rory Burns was dismissed by the first ball of the series to set the tone.With grey skies overhead and green tinges underfoot captain Joe Root resisted the temptation to bowl first, a decision he will rue for some time after Australia’s relentless pace attack wiped the tourists out inside two sessions.While Root will look back on his day in Brisbane with bitter regret, opposite number Pat Cummins enjoyed a charmed start to life as Australia skipper with figures of five for 38.Instantly iconic....
SPORTS・2 HOURS AGO
The Independent

England’s 2021/22 Ashes campaign began in chaotic fashion as they staggered to 59 for four on the opening morning at The Gabba.Captain Joe Root ignored grey skies overhead and green tinges underfoot by opting to bat first but saw the decision backfire dramatically immediately, with Rory Burns skittled by the very first ball of the series.He lost his leg stump to a swinging delivery from left-armer Mitchell Starc leaving himself exposed by some poor footwork, to ensure an explosive start to the first Test in Brisbane.The moment is set to go down in Ashes lore next to Steve Harmison’s...
SPORTS・4 HOURS AGO
The Independent

England skipper Joe Root has declared himself ready for an Ashes series that will “define my captaincy”.Statistically Root is already his country’s most successful Test leader, overtaking mentor Michael Vaughan in the summer when he oversaw a 27th victory over India at Headingley.But he has yet to get the better of Australia having suffered a 4-0 defeat in his previous campaign Down Under followed by a 2-2 draw in 2019 which saw the tourists retain the urn.So when Root steps out for the first Test at The Gabba on Wednesday, he knows his very reputation is on the line.“Of...
SPORTS・2 DAYS AGO
San Diego Union-Tribune

Sofia Goggia captured a World Cup super-G to go 3 for 3 in races at Lake Louise
SAN DIEGO, CA・2 DAYS AGO
The Independent

Gruff Rees says that Cardiff are in a “surreal situation” as they prepare to host European champions Toulouse without more than 30 players.Cardiff have a party of 42 players and staff in isolation at a hotel just outside London until next week, but their challenge is built on a platform provided by a handful of Wales internationals such as Josh Adams, Tomos Williams, Ellis Jenkins, Dillon Lewis and Seb Davies.They did not travel to South Africa which became a UK Government red-listed country as fresh travel restrictions were imposed following the discovery of a new coronavirus variant.It is a...
RUGBY・17 HOURS AGO
San Diego Union-Tribune

Serena Williams is missing from the entry list for next month's Australian Open in a move that suggests the seven-time champion could skip the 2022 edition of the season-opening major
SAN DIEGO, CA・50 MINUTES AGO
Wrestling World

Elias reappears with a new look

In recent months, several WWE Superstars have taken breaks, for personal or medical reasons, with some wrestlers still absent from the company's televisions. Among the many absent, we find Alexa Bliss, who underwent a nose surgery, to fix the problems that had gripped her for some time or Bayley, former champion of the blue show, struggling with a very bad injury that will keep her away from the ring for a few more months.
WWE・13 HOURS AGO