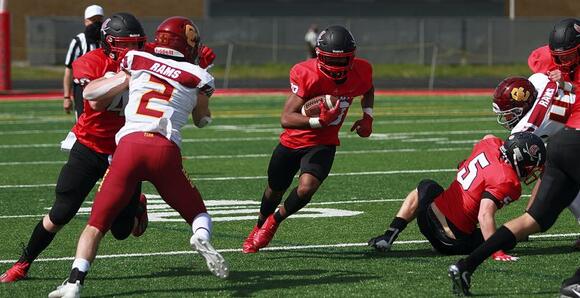 The Clackamas football team may not have started quickly in its latest game, but the Cavaliers made darn sure to finish that way.

Grant jumped out to an early lead in the two teams' non-league contest on Thursday, Oct. 7 —after Centennial forfeited their scheduled Mt. Hood Conference game against the Cavaliers — but Clackamas took over from there, pulling away to win 48-14 at Franklin High School.

"I was really happy to see our guys deal with some adversity in the first half and then show up and execute in the second half," said Clackamas coach James Holan. "Our kids are playing super hard for each other and displaying some great leadership."

With the win — the Cavaliers' seventh straight (including two forfeits) — Clackamas improved to 7-0 overall; the Cavs are also 5-0 in Mt. Hood Conference play. Grant, meanwhile, saw its three-game winning streak snapped and fell to 4-3 overall; the Generals are also 4-0 in Portland Interscholastic League play.

After the Generals' early TD — a 26-yard pass in the first quarter — Clackamas came back to tie the game at 7-7 when junior quarterback Blake Baker hit senior Miles Williams for a 49-yard score.

The Clackamas defense — which got interceptions from both Williams and junior linebacker Sullivan McDaniel — shut out Grant in the second quarter and set the table for Baker's 14-yard scoring strike to senior wide receiver Ben Moffett and a 14-7 lead at the half.

The Cavaliers then racked up a 27-7 scoring edge in the third quarter to completely take over and extend their lead to 41-14 after three periods. Junior running back Luke Ash got things started with a 4-yard touchdown run and senior wide receiver K.J. Johnson-Gibson came through next when he hauled in a 4-yard TD pass from Baker.

Then, after Grant added its other score, Moffett made his second TD grab — this one a 13-yarder from Baker — and Ash capped the quarter with an 18-yard TD burst for that 41-14 advantage.

Johnson-Gibson added the game's final score — a 24-yard touchdown pass from Baker — in the fourth quarter.

For the game, the Clackamas offensive line — led by senior Kage Casey, senior tight end Kaden Ludwick and senior Logan Chastain — was dominant, helping Cav runners pile up 240 yards on the ground and average seven yards per carry. Ash was the main beneficiary there, rushing 19 times for 217 yards and two scores, with a long run of 58 yards.

Next up, Clackamas — sixth in the latest Class 6A coaches poll and ninth in the OSAA power rankings — plays MHC foe Barlow at Barlow High School at 7 p.m. Friday, Oct. 15.

Despite some challenges, the 2021 fall season of high school sports was awesome.It was a helluva fall season. I know, I know, "helluva" is not a word, but I don't like swearing in print. Nonetheless, the 2021 fall high school sports season — as much of it as I saw anyway — was awesome. Here's why. While we in Oregon are still dealing with indoor mask mandates, social distancing requirements and more, even the most cautious among us has to admit that things are better pandemic-wise now than they were at the start of the fall season. At the end...
WEST LINN, OR・13 HOURS AGO
Clackamas Review

Check out the best of the best here, and link to the complete all-star lists for all fall sports.They are the best. The fastest, the most dangerous, the highest scoring, the toughest — these are your Tri-Valley Conference all-stars for the 2021 fall season. While we cannot publish every one of the various all-league teams in print, they will be published in full on the sports tab of our website, clackamasreview.com. But here's a snapshot of the very best of the very best from Tri-Valley Conference sports for the fall 2021 season.A D V E R T I S I...
SOCCER・2 DAYS AGO
Clackamas Review

Check out the best of the best here, and link to the complete all-star lists for all fall sports.They ran the fastest. They hit the hardest. They scored the most and they won — a lot. These are your Northwest Oregon Conference all-stars for the 2021 fall season. While we cannot publish every one of the various all-league teams in print, you can link to complete lists for each sport below. Here's a snapshot of the very best of the very best from Northwest Oregon Conference sports for the fall 2021 season.A D V E R T I S I...
SOCCER・7 DAYS AGO

Falcons get three PK goals from Mizael Harris, two scores by Kevin Serrano-Maldonado.The Class 5A state soccer championship game was less a competition and more a coronation for the La Salle boys team. The Falcons — the top-ranked Class 5A team in state — proved as much on Saturday, Nov. 13, when they routed No. 3 Corvallis 5-0 in the title game at Hillsboro Stadium. "We wanted to win so badly, just one more time," said La Salle senior forward Mizael Harris, who scored three goals — all on penalty kicks — and assisted on another in the championship. "I...
CORVALLIS, OR・17 DAYS AGO
Clackamas Review

The Falcons speed past Corvallis 5-0 in the title game at Hillsboro Stadium on Saturday.An unforgettable season for the La Salle boys soccer team ended with a Class 5A state championship Saturday, Nov. 13, as the Falcons earned a 5-0 victory over Corvallis at Hillsboro Stadium. The Falcons ended their season with a record of 16-1-1, while Corvallis finished at 12-4-2. La Salle grabbed a 2-0 lead in the first half off two penalty kick goals by senior Mizael Harris, then added a third PK by Harris and a pair of scores from sophomore Kevin Serrano-Maldonado for the final 5-0 margin. Come back to see full coverage of the game at clackamasreview.com. {loadposition sub-article-01}
HILLSBORO, OR・18 DAYS AGO
Clackamas Review

After trailing 7-6, Jesuit football scored late and added a pick-six to eliminate Clackamas from the 6A playoffs. Trailing 7-6, Jesuit High football finally broke through late against Clackamas to take a lead and added on a pick-six to seal the 19-7 win. The win for the No. 9 Crusaders (10-1) sends them to Class 6A quarterfinals where they will play No. 1 Lake Oswego. For Clackamas, its season ends with a 10-2 overall record with the only other loss coming to No. 4 Central Catholic. {loadposition sub-article-01}
CLACKAMAS, OR・18 DAYS AGO

Woodburn outlasts Gladstone 1-0 in the semifinals

Early goal from Woodburn's Valdez Vazquez the decider; Gladstone sees 10-game win streak snappedGLADSTONE, Ore.—History has a funny way of repeating itself. It was two years ago that the No. 9 seed Woodburn Bulldogs made the trek to the No. 1 seed Gladstone Gladiators to pull the 2-0 upset in the playoffs enroute to a state finals appearance. In the year 2021, Woodburn, this time the No. 4 seed, made the journey up to Dick Baker Stadium to square off against the No. 1 ranked Gladiators. Once again, the Bulldogs got the shutout win, this time 1-0, and advance...
GLADSTONE, OR・21 DAYS AGO
Clackamas Review

The top-ranked Falcons will face No. 3 Corvallis at 1 p.m. Saturday at Hillsboro Stadium.The La Salle boys soccer team is poised to attain its biggest goal. The top-ranked Falcons assured themselves a shot at the Class 5A state championship by beating North Salem 4-0 in their state semifinal at La Salle High School on Tuesday, Nov. 9. They pushed across three goals in the first half and one more in the second to dispatch the Vikings and earn a title-game berth against No. 3 Corvallis at 1 p.m. Saturday, Nov. 13, at Hillsboro Stadium. The Spartans (12-3-2 overall) upset...
HILLSBORO, OR・21 DAYS AGO
Clackamas Review

The Falcons come back from a 1-0 deficit and earn a berth in the Class 5A title game.Something had to give. The Tuesday, Nov. 9, Class 5A state semifinal matchup between the La Salle and North Eugene girls soccer teams was akin to the proverbial battle between the irresistible force and the immovable object. And for the longest time, it looked like the immovable force — North Eugene's stellar defense — would win. The Highlanders, who had only been scored on in two earlier games this year, took a one-goal lead late in the first half and held it for...
SOCCER・22 DAYS AGO