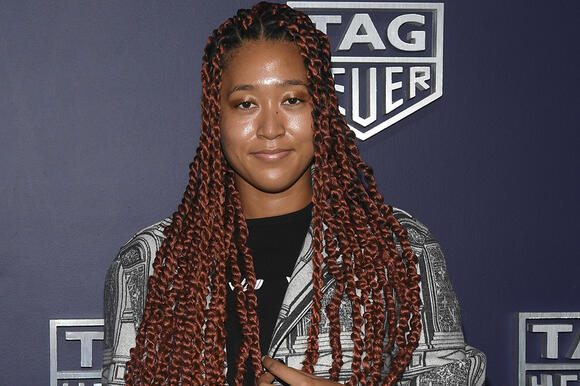 Naomi Osaka made a red carpet appearance at a Tag Heuer event in Los Angeles on Thursday night. The tennis star repped her brand partnerships by wearing a Tag Heuer watch paired with a head-to-toe L ouis Vuitton ensemble.

Osaka became an ambassador for the Swiss brand earlier this year. She also joined Louis Vuitton as its face in January and made her d ebut in the house’s spring 2021 campaign.

On Thursday night, Osaka wore an graphic coat dress by Louis Vuitton. The monochrome jacquard print seen on the jacket was inspired by architecture as part of the collection’s collaboration with Fornasetti. The look is complete with oversized leather patch pockets.

Her shoes, meanwhile, provide a summery contrast with its pink braided straps and ankle ties. The shoes are detailed with the laces that bear the Louis Vuitton signature as well as an espadrille wedge heel and footbed.

The Tag Heuer event was for actor Ryan Gosling, who signed his first-ever partnership on Thursday. The swiss brand held a cocktail event to celebrate the event. As part of the deal, Gosling will star in campaigns for Tag Heuer and be involved in the artistic direction, as well as design his own watch.

For the party, the Gosling made a statement in a yellow suede suit — sans tie. He completed the look with a blacks shirt underneath his jacket with black leather lace-ups.

Lady Gaga debuted a glamorously slick look for a “House of Gucci” screening this week. The Academy Award-winning actress stepped out in a sleek custom Et Ochs dress. The sleeveless brown number featured two front cutouts, as well as thin straps and a daring thigh-high slit. Gaga’s look was complete with a flowing train, adding to her outfit’s drama factor. For footwear, the “Rain On Me” singer donned a pair of her signature sky-high heels. The D’Accori Belle style featured a pointed-toe silhouette with thick platform soles, angular and slingback straps with metallic bronze leather uppers. The disco-worthy pair also included 5.9-inch heels,...
RETAIL・16 DAYS AGO
Footwear News

Meghan Markle made a bold style move while arriving with Prince Harry at the Salute to Freedom gala at the Intrepid Museum in New York City. The Duchess of Sussex hit the red carpet in a red halter-neck Carolina Herrera gown. The style featured a cinched waistline and thigh-high slit, as well as a deep neckline and flowing skirt. Markle accessorized simply, pairing the bold piece with diamond earrings and a poppy lapel pin. The dress’ shape and silhouette were a sharp departure from her typical reserved style, but still remained elegant. For footwear, Markle went the colorful route and wore a...
NEW YORK CITY, NY・16 DAYS AGO
Footwear News

Simone Biles brought a refreshing take to the cutout trend at the 2021 InStyle Awards at the Getty Center in Los Angeles, California. The Olympic athlete hit the red carpet in a flowing dark green gown by Aliette. The style featured a flowing skirt and allover ruched draping details. The textured number also included bows with long ends accenting two straps and a daring thigh-high slit. Biles added an elegant touch to her ensemble with Mateo New York drop earrings and a dark green Judith Lieber clutch. For shoes, Biles created a two-tone look with mint green sandals. The Christian Louboutin style featured thin ankle and toe straps in shiny leather. The style added a bold pop of color to the “Courage to Soar” author’s outfit, while elevating her gown’s formal dress code with a modern twist. The annual InStyle Awards honor the year’s top talents in the fields of fashion, beauty, and pop culture. This year’s ceremony, held at the Getty Center in Los Angeles, California, honored a range of individuals including Simone Biles and Congresswoman Katie Porter. This year’s event was sponsored by Christian Louboutin, Fiji, Citizen Watches, Bird in Hand Wine and Cadillac. Click through the gallery for more celebrity arrivals from the 2021 InStyle Awards.
LOS ANGELES, CA・10 DAYS AGO
Us Weekly

Serena Williams stole the show last night in this all-black Gucci look and we're loving the ensemble on the tennis champion!
TENNIS・19 DAYS AGO
Hello Magazine

All eyes were on Halle Berry on Saturday night as the Hollywood star stepped out onto the red carpet. The actress was out to celebrate the release of her directorial debut, and she did it in serious style. Halle attended the AFI Fest premiere of her film Bruised at the...
CELEBRITIES・11 DAYS AGO
Insider

The rapper's look was designed by Eli Russell Linnetz, who said he texted Kid Cudi a picture of a wedding dress and asked, "Will you be my bride?"
NEW YORK CITY, NY・16 DAYS AGO
purewow.com

Gabrielle Union attended a major Gucci event last night and naturally, she looked stunning in one of the brand’s own styles. On Tuesday, Union and her family—husband Dwyane Wade and her stepdaughter, Zaya—attended the Gucci Love Parade on Hollywood Boulevard in Los Angeles. For the occasion, the 49-year-old looked incredible in a peach dress from the Gucci Summer 2020 collection. The piece featured a thigh-high slit and a flower cutout at the midriff. She paired the look with long braids, a Gucci clutch and a pair of mint heels.
LOS ANGELES, CA・24 DAYS AGO

Cardi B looked incredible as she counted down to this weekend’s American Music Awards! The host helped roll out the red carpet in a pair of sky high heels and sexy gown. Cardi B, 28, just can’t wait for the American Music Awards! The “WAP” rapper, who is set to host the show on Sunday, showed up to the Los Angeles venue two days before the to help roll out the red carpet on Friday, Nov. 19. Cardi was all black tie gala vibes in her sexy, high-slit gown and a pair of strappy sandals. The sparkly black ensemble was giving off serious ’80s vibes with its bustier style top attached that included a high neck cover.
LOS ANGELES, CA・7 DAYS AGO
RNB Cincy 100.3

Gabrielle Union-Wade and her family stepped out at the Gucci Love Parade fashion show in Los Angeles and served lewks on a platter.
DESIGNERS & COLLECTIONS・23 DAYS AGO
Best Life

There are childhood milestones and then there are celebrity childhood milestones. And recently, one athlete's kid reached a big one. On Sunday night, Serena Williams' daughter made her red carpet debut at the premiere of King Richard. Williams and husband Alexis Ohanian posed for the cameras alongside four-year-old Olympia, who even spoke to a reporter. For the event, Williams and Olympia wore matching outfits, which they often do. Read on to see the Ohanian-Williams family at the event and to see a couple of Olympia and her mom's past matching looks.
TENNIS・10 DAYS AGO
Cosmopolitan

Last night, a handful of your favourite celebrities attended the 2021 American Music Awards (AKA, the AMAs) to celebrate the best in the biz. And, of course, what's an award show without some incredible red carpet fashion to kick off the event? Rather than having a set fashion 'brief' (as is often the case with events like this), there was a load of style variety to feast your eyes on, ranging from elegant tiered ballgowns to sexy 'going out' dresses, daring cut-outs and everything in between. Yup, there's an outfit for everyone.
BEAUTY & FASHION・5 DAYS AGO

"King Richard" — the highly-anticipated film about Venus and Serena Williams' journey to tennis glory as spearheaded by their father, Richard — comes out in theaters and on HBO this Friday. The movie premiered at Hollywood's TCL Chinese Theatre on Sunday, and the Williams sisters were on hand with family...
TENNIS・10 DAYS AGO
In Style

Kate Hudson's eldest son, Ryder Robinson, is officially all grown up — and looks just like his mom. On Thursday night, the 17-year-old made a rare red carpet appearance alongside Hudson and his grandma, Goldie Hawn, at the Stella McCartney x The Beatles collection launch in Los Angeles. For the...
LOS ANGELES, CA・6 DAYS AGO
hypebeast.com

Naomi Osaka has just taken to Instagram to announce that she will be joining Victoria’s Secret as an ambassador — taking part in the American beauty retailer’s ongoing rebrand. “Very excited and proud to join an incredible group of women. Wouldn’t have thought this was possible as a child and...
TENNIS・9 DAYS AGO
Footwear News

Gabrielle Union was all Gucci and all smiles on Tuesday night in Los Angeles. The actress arrived to Italian house’s latest catwalk extravaganza dubbed Gucci Love Parade, with her husband Dwyane Wade and his daughter Zaya, donning a camel-hued, long-sleeve dress with chic cutouts and a high leg slit. The 49-year old jazzed up her neutral frock, also by Gucci, with sleek silver sandals with a matching clutch. The Hollywood Walk of Fame was shut down for creative director Alessandro Michele’s star-studded runway show, with 100 looks modeled by the famous likes of Jared Leto, Macaulay Culkin, Jodie Turner-Smith, St. Vincent and Miranda...
LOS ANGELES, CA・23 DAYS AGO

Lorde Wore Her Hair as a Scarf on the Red Carpet

Leave it to Lorde to find a wildly inventive way to keep warm while walking the red carpet as temperatures everywhere begin to dip. On Wednesday night, the singer attended the 2021 Guggenheim International Gala in New York City and defied winter by wearing a strapless pleated gown with no coat. Though, she did have on a scarf (sort of).
BEAUTY & FASHION・9 DAYS AGO
Footwear News

Sofia Vergara makes being on-the-go look so chic. The “Modern Family” actress posted a photo to her Instagram story today, that showed her wearing a rather flowy, sleek dress. For the ensemble, Vergara sported a red maxi dress that featured two straps and a sweetheart neckline. Vergara added another dimension to her outfit by draping a neutral sweater over her shoulders. She accessorized the look by wearing a cream-colored Chanel shoulder bag. When it came down to the shoes, Vergara slipped on a pair of printed Puma sneakers that added a perfect sporty twist. Vergara’s essential style consists of eye-catching prints and silhouettes...
DESIGNERS & COLLECTIONS・4 DAYS AGO
Hollywood Life

Paris Hilton went all out for ‘Paris World’! The socialite donned one of her favorite colors as she arrived for her festive post-wedding carnival. Paris Hilton put her twist on bridal wear for her post-wedding carnival! The 40-year-old looked so in love with husband Carter Reum, 40, as the two held hands making their way into the Santa Monica Pier on Friday, Nov. 12. Paris turned heads in a custom Barbie pink dress wore designed by alice + olivia’s Stacey Bendet. The gorgeous gown included a high-low tulle skirt with crystal details, embellished mesh sleeves, and bodice overlay. She added a veil over her curled blonde blocks, and a pair of heart-shaped sunglasses covering her face.
CELEBRITIES・13 DAYS AGO
The Independent

Entertainer JoJo Siwa opened up about the split from her girlfriend Kylie Prew during an appearance on the AMAs red carpet. Speaking to People, Siwa spoke candidly about how she was finding the experience, following her nine-month relationship with Prew. “It’s been wild, it’s been crazy,” the 19-year-old said. “I was with my girlfriend for nine months, and those nine months were amazing and incredible.”She continued: “One thing that I’m grateful for is that we’re both OK... we’re obviously not as close as we used to be, but we’re both OK, and we’re both happy, and that’s all that...
CELEBRITIES・5 DAYS AGO