Father alleged to have murdered son, 6, sent texts threatening to ‘take his jaw off his shoulders’ 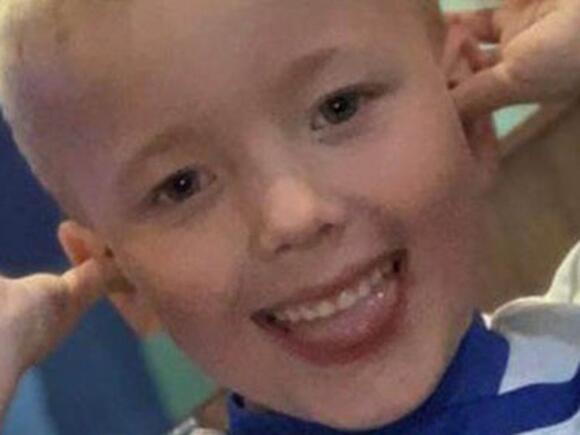 A father accused of murdering his six-year-old son sent a text saying he would “take his f***ing jaw straight off his shoulders”, a jury heard.

Prosecutors allege Arthur Labinjo-Hughes was killed by his father, Thomas Hughes, 29, and his girlfriend, Emma Tustin, 32, last June after being poisoned with salt and subject to months of abuse.

On the second day of a trial at Coventry Crown Court, jurors were shown WhatsApp messages between the accused pair. They were also played dozens of Tustin's mobile phone audio recordings of Arthur crying, and shown pictures of bruising to his shoulders.

Jonas Hankin QC, prosecuting, showed pre-lockdown photos of Arthur, including ones of him at a McDonald's and playing in a park.

He read excerpts from a message in which Hughes reacted to an audio clip by saying: “I will deal with him when I'm home and it won't be pretty.”

It was then suggested in a message that Arthur be put “out with the rubbish” before Tustin described the boy as being “on one”.

Hughes was said to have replied: “Won't be when I take his ****ing jaw straight off his shoulders”.

Another message from Tustin, sent on 23 May last year, read: “I don't think I can do this any more. He shuts up as soon as you come through the door. He is malicious, cruel and just generally awful.”

A video filmed by Tustin the next day, lasting just over a minute, showed Arthur sitting on a tiled floor, wearing a Batman T-shirt, as he slapped himself in the face and raised his foot to his own head in a kicking motion. After being sent a photo of Arthur, Hughes said: “He's an absolute disgrace. That's not my son.”

Arthur was placed in his father’s care after his mother was jailed for killing her boyfriend. Jurors earlier heard that he was killed three months after his father moved into Tustin’s home on Cranmore Road, Solihull , West Midlands.

Tustin is alleged to have killed Arthur by banging his head against a hard surface while alone with him at her home.

Prosecutors claim she immediately fetched her phone to take a photograph of the dying child but did not call 999 for 12 minutes. She was said to have told medics Arthur “fell and banged his head and while on the floor banged his head another five times”. She said in the phone call that Arthur treated her and Hughes “like s***”, Mr Hankin said.

Hughes and Tustin are both charged with murder along with child cruelty for administering salt to Arthur between 1 and 17 June last year.

They deny the charges. The trial continues and will hear further evidence next week.

‘Poisoned’ boy, 6, struggles to stand before dad and stepmom ‘tortured him to death’

This is the moment a six-year-old boy struggles to stand before he was allegedly poisoned and tortured to death by his dad and stepmom. Thomas Hughes, 29, and Emma Tustin, 32, are accused of murdering Arthur Labinjo-Hughes who suffered an “unsurvivable brain injury.”. The youngster was allegedly subjected to a...
PUBLIC SAFETY・6 DAYS AGO
WAAY-TV

A Jackson County woman who killed a man she says raped her in 2018 is back behind bars. A parole officer says Brittany Smith violated her house arrest - for the second time this year - by going out to a trunk or treat event with her kids on Halloween.
JACKSON COUNTY, AL・26 DAYS AGO
International Business Times

A man has been arrested after murdering his 8-year-old daughter, who refused to speak about her mother's alleged affair when the man questioned her about it, police said. The police arrested the suspect, identified as Radhakrishnan, 34, Sunday for fatally stabbing his daughter and slitting her throat after barging into a residence where his two children lived with his estranged wife. The incident took place on Oct. 30 at Chennai, a city in the Southern Indian state of Tamil Nadu, The Indian Express reported.
PUBLIC SAFETY・28 DAYS AGO
CBS Minnesota

ST. PAUL (WCCO) – A St. Paul man has been sentenced to over 72 years in prison for killing a mother and her two children in late January. TeKeith Jones, 28, pleaded guilty to three counts of second-degree murder in September. On Tuesday, he was sentenced to serve 72 years and 4 months in St. Cloud Prison. Jones told police he shot and killed D’Zondria Wallace, 30, La’Porsha Wallace, 14, and Ja’Corbie Wallace, 11, to “save them.” The criminal complaint states that Jones told police he was “going through a life experience he didn’t understand” and “was going to save someone so...
SAINT PAUL, MN・6 DAYS AGO

Three 18-year-old men have been jailed after they were found guilty of luring a man to a park and stabbing him to death in Birmingham, England, last year. Danish Mansha, Rimsha Tariq and Daiyaan Arif, were all charged with murder in connection with the death of 29-year-old Sohail Ali. After...
PUBLIC SAFETY・21 DAYS AGO
The Independent

A father on trial for helping his partner murder his six-year-old son has said he valued her love and attention more than his son.Thomas Hughes is accused of aiding and abetting his girlfriend Emma Tustin in killing Arthur Labinjo-Hughes.The previously “happy, chubby, healthy, active” boy was allegedly abused over several months after he and his father moved into Ms Tustin’s home during the first Covid lockdown last year.Prosecutors claim the pair forced Arthur to stand in the hallway for 14 hours a day, gave him meals laced with excessive amounts of salt to poison him, withheld food and drink, isolated...
PUBLIC SAFETY・7 DAYS AGO
The Independent

A teenage boy who stabbed his friend more than 70 times and tried to behead him had been reportedly expelled from school at the age of 10 after threatening a girl with a knife.Marcel Grzeszcz, 15, was convicted of murdering Roberts Buncis on 12 December last year, two days before the victim’s 13th birthday.It has since emerged that he was expelled after he had taken a knife into St Nicholas Primary School in Boston, Lincolnshire, and threatened a girl with it.A mother who used to take Roberts to school with her children told The Sun: “It’s not his first incident...
PUBLIC SAFETY・20 DAYS AGO
International Business Times

A U.K. mother was arrested after she took a knife and rushed to a London police station to "punish" the necrophile who raped the body of her daughter. David Fuller, 67, pleaded guilty last week to killing Wendy Knell, 25, and Caroline Pierce, 20, in separate attacks in Tunbridge Wells, Kent, nearly 35 years ago. He also admitted 44 charges in relation to necrophilia involving women and girls aged between 9 and 100 in morgues in Sussex and Kent.
PUBLIC SAFETY・23 DAYS AGO

A pregnant woman in Texas sent a series of ominous texts to friends and family minutes before she was fatally shot in the face in the middle of a street. Authorities in Houston are now searching for 25-year-old Cavanna Smith’s boyfriend, who they believe murdered her last month soon after finding out that she was pregnant.
HOUSTON, TX・14 DAYS AGO
The Independent

The mother of two murdered women whose bodies were photographed by Metropolitan Police officers has told the force to “get the rot out once and for all”.Mina Smallman, a retired Anglican priest, said Scotland Yard’s apologies for the handling of her daughters’ disappearance and officers’ subsequent actions was “too little, too late”.Speaking outside the Old Bailey, she said: “You need to drill down and get the rot out once and for all. You are not above the law, you are not going to be protected.”Asked if the Metropolitan Police commissioner should resign Ms Smallman said it was not the “right...
PUBLIC SAFETY・28 DAYS AGO
Chrissie Marie

Foster mom commits suicide before her arrest for child abuse and murder.Facebook/Latricia Thomas. A Tennessee woman, suspected of killing and abusing her 2-year-old foster son, was found dead from an apparent suicide, Crime Online reported. Deborah Barnes was facing a criminal homicide and child abuse charges for two-year-old Vincent Carter's death. Before the Chattanooga police could arrest her, she took her life.
NASHVILLE, TN・15 DAYS AGO
The Independent

The former lover of a Florida woman convicted of plotting to kill her husband has been found dead 12 years after he turned her in to police.Mohamed Shihadeh, 40, was found dead on 24 October at his home in Sebring, Florida, according to a police report. The cause of death is still pending.Mr Shihadeh had dated Dalia Dippolito about a decade before he went to Boynton Beach Police in 2009 and claimed she had asked him to help hire a hitman to kill her husband Michael Dippolito.Police set up a sting with an undercover officer posing as a hitman, who...
PUBLIC SAFETY・26 DAYS AGO

A mother accused of killing her 16-month-old daughter has admitted making "cruel" videos of her shouting at the toddler. Star Hobson suffered a cardiac arrest and died in hospital on 22 September 2020. Her mother Frankie Smith, 20, and Savannah Brockhill, 28, both from Keighley, West Yorkshire, deny murder. A...
PUBLIC SAFETY・8 DAYS AGO
The Independent

Four teenagers have been jailed for life over the murder of 15-year-old schoolboy Keon Lincoln in a gun and knife attack in Birmingham.Fourteen-year-old Yussuf Mustapha, who is thought to be Britain’s youngest defendant convicted of gun murder, was accused of firing the fatal shot and was sentenced to life in prison at Birmingham Crown Court on Monday.Keon’s mother Sharmaine Lincoln, who after hearing gunshots found her son wounded outside their home in Handsworth, described his murder as “a nightmare that I cannot wake up from”.The fatal attack in January had been “carefully planned and executed” using a revolver and...
PUBLIC SAFETY・1 DAY AGO
International Business Times

Father Beats Infant To Death For Crying, Allegedly Murders His 2 Other Kids Due To Poverty

In a shocking incident, a man in Nigeria murdered his 2-month-old baby girl because the infant would not stop crying. He, along with his wife, allegedly also murdered their two other children due to poverty and abandoned a third one. The suspect, identified only by his first name Sanjo, from...
SOCIETY・21 DAYS AGO
International Business Times

A disabled man in the Indian state of Uttar Pradesh, whose burnt body was found by his family on a pile of garbage last week, was smothered and stabbed to death by his friends, police said. The victim, identified as Sachin, was out partying with his friends Vivek, Ravi, Saurabh...
PUBLIC SAFETY・1 DAY AGO
thelandonline.com

MANKATO — The father of a baby who died earlier this month is now charged with murder and manslaughter. Kristopher Dale Arlando Henderson, 39, of Mankato, is accused of causing fatal injuries to his 2-month-old daughter in September. Charges against Henderson were amended Friday in Blue Earth County District Court...
MANKATO, MN・6 DAYS AGO
miheadlines.com

PLEASANT RIDGE, MI – A Troy man who fatally wounded his mother with a single shot to the head while she drove them home from a Thanksgiving Eve family dinner near the Pleasant Ridge-Royal Oak border was charged by prosecutors today with open murder. George Michael Harry II, 22-years-old, is...
PLEASANT RIDGE, MI・20 HOURS AGO
WHNT News 19

Father and son arrested in Tennessee, charged in 2018 murders

The Tennessee Bureau of Investigation announced a father and son are facing charges for first-degree murder in a 2018 double-murder investigation.
TENNESSEE STATE・4 DAYS AGO
The Independent

A murderer who refused to reveal where he hid his wife’s body has been sent back to jail after breaching his licence conditions. Russell Causley, now in his late 70s, was handed a life sentence for killing Carole Packman. She disappeared in 1985, a year after Causley moved his lover...
PUBLIC SAFETY・1 DAY AGO