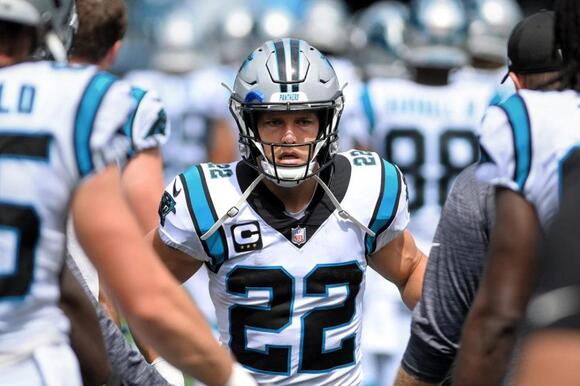 The Panthers (3-1) on Friday listed McCaffrey as doubtful for Sunday’s game against the visiting Philadelphia Eagles (1-3).

McCaffrey registered limited practices this week as he works his way back from a hamstring injury sustained during Carolina’s 24-9 victory over the Houston Texans on Sept. 23.

“Nothing much more to add,” Panthers head coach Matt Rhule said. “He’s been going. It’s doubtful he’ll play on Sunday. That could change. I’m not going to play any games (with the injury status).” 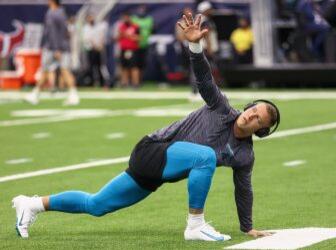 McCaffrey, 25, has 52 carries for 201 yards and a touchdown to go along with 16 receptions for 163 yards in three games this season. He played only three games in 2020 due to a high ankle sprain and a shoulder injury.

Rookie running back Chuba Hubbard rushed for 57 yards and added two catches for 14 yards in the Panthers’ 36-28 setback to the Dallas Cowboys on Sunday.

The team also listed linebacker Shaq Thompson (foot) and offensive tackle Cameron Erving (shoulder/neck) as out for the contest.

Thompson, 27, has recorded 25 tackles, one sack and one interception in four games this season.

Erving, 29, has started all four games this season and 51 of 79 career games in which he has competed with the Cleveland Browns, Kansas City Chiefs, Cowboys and Panthers.

With two losses in just five days, a lot of the luster has come off the Dallas Cowboys. But Cowboys owner Jerry Jones doesn’t plan on hitting the panic button anytime soon. In an interview with 105.3 The Fan on Friday, Jones lamented that his team couldn’t put enough pressure on Las Vegas Raiders quarterback Derek Carr yesterday. But he made it clear that the defense will improve and “the sky is not falling.”
NFL・3 DAYS AGO
Insider

The Colts traded for Carson Wentz with hopes of becoming contenders. Now they're stuck in purgatory and faced with a brutal decision.
NFL・27 DAYS AGO
featureweekly.com

The Dallas Cowboys will be missing wide receiver Amari Cooper for at least two of their three games in a 12-day span, beginning Sunday against the Kansas City Chiefs. Cooper was placed on the reserve/COVID-19 list on Friday. Cooper tested positive for COVID-19 and is unvaccinated, according to ESPN, which...
NFL・10 DAYS AGO
CowboyMaven

FRISCO In more ways than one, Dak Prescott captained his Dallas Cowboys to Sunday’s 43-3 rout of the Atlanta Falcons. Michael Irvin would like his pal Dak to captain his Cowboys in one less way. “We don’t need that TD that bad bro!! @dak don’t do that s-t again!!!! WE...
NFL・14 DAYS AGO

Nelson Agholor is no longer Public Enemy No. 1 in Philadelphia. The Philadelphia Eagles dropped a very winnable and frustrating 13-7 game to the New York Giants on Sunday. Jalen Hurts had a poor showing with three interceptions off of some very bizarre decisions, but much of Philadelphia fans’ ire is now being directed at wide receiver Jalen Reagor.
NFL・1 DAY AGO
The Spun

Tempers flared during the second half of the Cowboys-Raiders game, as the two sides found themselves in a brawl on the sidelines. The officiating crew did a decent job of breaking up this fight, but one of the referees actually paid the price for defusing the situation. The camera crew for CBS showed one of the officials with a cut on their chin.
NFL・4 DAYS AGO
Washington Post

BEVERLY HILLS, Calif. — Michael Vick appears in the lobby dressed in all-black sweats, a look that helps one of the NFL’s most famous — and at one point, most infamous — retirees find a seat in the middle of the hotel’s restaurant without notice. He’s lean and fit; the gray hairs on his chin are all that keep you from assuming Vick could still make a pair of defenders comically take out each other in an attempt to tackle him.
NFL・2 DAYS AGO

The Philadelphia Eagles were not sold on Jalen Hurts as their franchise quarterback a few months ago, but opinions within the organization seem to have changed rather quickly. The Eagles have won three of their last four games, and Hurts has played well during that stretch. According to Ian Rapoport of NFL Media, Philly’s brass is starting to get more comfortable with the idea of moving forward with Hurts as the team’s starting quarterback beyond this season. The Eagles are excited about Hurts’ recent play, as it is an indication that they won’t have to draft a QB in the first round this offseason or acquire one via trade.
NFL・1 DAY AGO
New York Post

Travis Kelce and the Chiefs may have this Sunday off, but the tight end still made his weekend about football. Kelce and girlfriend Kayla Nicole attended Sunday’s Eagles game against the Giants at MetLife Stadium in New Jersey, where they got to watch his older brother, center Jason Kelce, in action.
NFL・1 DAY AGO
FanSided

The Dallas Cowboys clearly have something in running back Tony Pollard. Here are three hypothetical trade destinations for Ezekiel Elliott if they were to plan on moving him. The Dallas Cowboys participated in a thrilling Thanksgiving Day game against the Las Vegas Raiders. Even though they forced overtime, it was the Raiders who left AT&T Stadium with the 36-33 victory.
NFL・4 DAYS AGO
ClutchPoints

Terrell Owens is considered one of the best football players and wide receivers of his era. However, he battled through a lot of controversies during his career despite his stellar play on the field. Right now, we will take a look at Terrell Owens’ net worth in 2021. Terrell Owens’...
NFL・9 DAYS AGO

The Philadelphia Eagles have agreed to a major contract extension with fourth-year tight end Dallas Goedert. According to reports from NFL Network insider Ian Rapoport, the deal is worth $57 million with $35 million guaranteed, making him the third highest-earning tight end behind George Kittle and Travis Kelce with an average annual salary of $14.25 million.
NFL・10 DAYS AGO
Sportsnaut

The Philadelphia Eagles went into the summer uncertain about Jalen Hurts, questioning whether or not he could be the long-term
NFL・2 DAYS AGO
94 WIP Sports Radio

Jalen Hurts just made his 14th NFL start as an NFL quarterback with the Philadelphia Eagles and Joe Giglio, interestingly, compared those 14 starts with Carson Wentz’s first 14 starts as an Eagle.
NFL・13 DAYS AGO
The Spun

Jerry Jones made his opinion on the officiating in Thursday afternoon’s Dallas Cowboys vs. Las Vegas Raiders game extremely clear. The Cowboys fell to the Raiders, 36-33, in overtime on Thursday. Dallas dropped to 7-4 on the season with the loss, while Las Vegas improved to 6-5. The game was...
NFL・4 DAYS AGO
CowboyMaven

FRISCO - It is a play that, given all the notable plays that occurred in Sunday night’s notable 20-16 Dallas Cowboys win at the Vikings, sort of traveled under the radar. But social media being what it is, Cowboys receiver CeeDee Lamb complaint that he was tackled on the sideline by Vikings safety Harrison Smith and they subjected to a dirty play is now garnering the attention it just might deserve.
NFL・26 DAYS AGO
247Sports

College football coaches across the country had some tough calls to make after rivalry weekend exceeded the hype. From The Game to the Iron Bowl to Bedlam, rivalries bring a new look at top-25 rankings as well as the College Football Playoff with no result speaking louder than Michigan over Ohio State. And now, only conference championships stand between college football and an official playoff field.
COLLEGE SPORTS・1 DAY AGO
97.3 ESPN

On Friday's Philadelphia Eagles Injury Report, there is good and bad news heading into the division rivalry game with the New York Giants this Sunday that will impact both sides of the ball:. Let's start with the Good News which is arguably the most important player available for Sunday's Game:...
NFL・3 DAYS AGO
Sports Illustrated

Discover player props odds, plays, and insights for Christian McCaffrey in his Week 11 contest with the Carolina Panthers against the Washington Football Team.
NFL・9 DAYS AGO