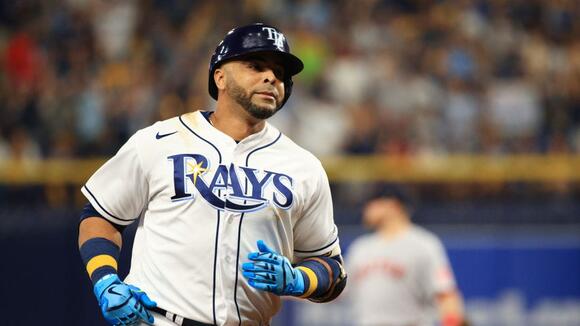 Randy Arozarena may be the biggest star of the postseason, picking up where he left off after his incredible 2020 playoff performance with a home run and a stolen base — of home plate — in Game 1 between the Rays and the Red Sox. But don't let that blind you from what one of his teammates accomplished.

If you watched the game, you probably weren't blinded enough by Arozarena to take note of the towering, if bizarre, blast that 41-year-old Nelson Cruz hit in the bottom of the third inning. Thanks to Tropicana Field, the long ball hit off a catwalk and was ruled a home run based on the rules of which catwalks are deemed high/far enough for a homer. Needless to say, Red Sox fans were more than a little peeved, though that home run wasn't the reason they lost the game.

Instead of complaining about catwalk-gate, let's consider just how cool this feat was for Cruz. It was his 18th postseason home run in his long career, which moved him into the top nine all-time. Here's that full list:

Of all those players, Cruz is the only one with fewer than 250 plate appearances, and it's very likely that he'll continue to climb that list. As Ryan Spaeder noted, the veteran slugger also joined exclusive company atop the postseason OPS leaderboard.

We'll see how much further he can climb and if any records become within reach as the postseason progresses.

The San Diego Padres are in need of another power bat in the lineup. The perfect man for the job is All-Star DH Nelson Cruz. The Padres need more thump. There is no question about it. After Fernando Tatis Jr. and Manny Machado, there is not much reliable pop in San Diego’s everyday lineup. To compete in the tough NL West and put the disappointing 2021 season squarely in the rearview mirror, a splash signing is needed to inject juice into the sometimes-lackluster lineup.
MLB・7 HOURS AGO
beyondtheboxscore.com

Somehow, at 41 years old, Nelson Cruz is still one of the premier hitters in baseball. Since the start of the 2019 season, a sample of over 300 games, Cruz has mashed to the tune of a .289/.368/.569 slash line, good for an OPS+ of 152. While his age will no doubt be a factor in his free agency, his bat is too good to be ignored, and he will certainly find a place to play in 2022, if he chooses to do so, something few players can do past the age of 40. It is very natural to wonder if retirement might be Cruz’s ultimate decision. While nothing is ever certain, Cruz said as recently as the start of the 2021 season that retirement was not on his mind.
MLB・11 DAYS AGO
Empire Sports Media

The New York Yankee family was saddened to learn of the passing of ex-Yankee manager Bill Virdon. Virdon was manager of the Yankees during 1974 and 1975 before being replaced in 1975 my the new manager Billy Martin. In 1974 he won 89 games for the Yankees. However, Virdon’s claim...
MLB・10 DAYS AGO
NESN

The New York Yankees seemingly have been tied to each free agent this offseason, but reportedly got one of their guys Monday. The Yankees signed former Boston Red Sox shortstop José Peraza to a minor league deal, according to Dan Martin of the New York Post. Peraza has bounced around...
MLB・6 DAYS AGO

A former Boston Red Sox player who helped the team win a World Series title in 2007 has died. According to ESPN Deportes and Dominican newspaper Diario Libre, former shortstop Julio Lugo died of an apparent heart attack on Monday. Lugo's sister, Rina Lugo, told the sports outlet that her...
MLB・20 DAYS AGO
NJ.com

The Associated Press reports the Detroit Tigers added infielder Kody Clemens, the youngest son of seven-time Cy Young winner Roger Clemens, to their 40-man roster. The 25-year-old Clemens, an infielder, hit .247 with 18 homers and 59 RBIs in 97 games for the Mud Hens last season, his first year at Triple-A.
MLB・13 DAYS AGO
FanSided

Andrew Heaney had a terrible end to his LA Angels career, and it didn’t end there. After posting a 5.27 ERA with the Angels in 18 starts last year, he went to the Yankees and posted a 7.32 ERA over 12 games (five starts). It was a really awful year for Heaney, and it would appear that he’d have a tough time finding a new home for next year. Besides, he hasn’t had a sub-4 ERA since 2015.
MLB・27 DAYS AGO
Larry Brown Sports

After coming up short in this year’s playoffs, the Los Angeles Dodgers could be going back to their fundamentals: acquiring another big name. Bob Nightengale of USA Today Sports reported this week that the Dodgers are interested in former Cy Young candidate Sonny Gray, having engaged in trade talks with the Cincinnati Reds. Fellow Reds starter Luis Castillo was also included in those discussions, Nightengale adds.
MLB・21 DAYS AGO

The Yankees are sending an infielder to LA. On Monday, the team reported Tyler Wade has been traded to the Angels. “The New York Yankees today announced that they have traded INF/OF Tyler Wade to the Los Angeles Angels,” the team announced on social media. The trade is for a...
MLB・13 DAYS AGO
Yardbarker

Red Sox right fielder Hunter Renfroe was unable to win his first career Gold Glove Award on Sunday night. Renfroe was named one of three finalists for the award among all American League right fielders late last month alongside Houston’s Kyle Tucker, but the honors on Sunday instead fell to Yankees outfielder Joey Gallo.
MLB・27 DAYS AGO
FanSided

The Dodgers lost Corey Seager to a monster free-agent deal with the Rangers and one of the deciding factors as to why he left LA has come to light. On Monday, the Texas Rangers signed former Los Angeles Dodgers infielder Corey Seager to a massive 10-year/$325 million contract. The front office and fans alike are sort of reeling and scratching their heads as to why/how they could lose out on Seager to the Rangers with Los Angeles being the second-largest market in the sport.
MLB・5 DAYS AGO
NJ.com

More problems for Robinson Cano. The New York Mets announced Wednesday “Canó was removed from the Estrellas Orientales roster with lower back discomfort. He has been prescribed physical therapy and is considered week to week.”. ESPN’s Hector Gomez was the first to report on Cano’s plans to play in the...
MLB・10 DAYS AGO

Hall of Fame manager Joe Torre only spent three years at the helm with the Dodgers. In his first season, he was able to manage the team to their first NL Championship Series in 20 years. But apparently, a young lefty named Clayton Kershaw wasn't his biggest fan. Torre said in an interview this week ...
MLB・18 DAYS AGO
fox40jackson.com

Trevor Bauer, the Los Angeles Dodgers pitcher accused of sexual assault, used the Kyle Rittenhouse acquittal to take a shot at “the media.”. “I guess it’s important to know all the facts before jumping to conclusions, huh? Apparently not everything written in the media is true,” Bauer tweeted. Kyle Rittenhouse...
MLB・15 DAYS AGO
Dodgers Nation

After seven years with the Dodgers, Corey Seager is trading Dodger blue for a whole lot of green. A big, Texas-sized pile of green. Seager agreed to a 10-year, $325 million deal with the Texas Rangers on Wednesday, leaving LA in his rearview mirror. In the wake of Seager’s signing...
MLB・5 DAYS AGO
The Spun

Carlos Correa has made an official decision on his qualifying offer from the Houston Astros. Correa has declined the Astros’ $18.4 million qualifying offer, according to Jon Heyman. His days in Houston are over. The 27-year-old star is now the top free agent in baseball and is bound to receive...
MLB・20 DAYS AGO
NJ.com

A familiar name is back on the market. The Orange County Register reports the Los Angeles Dodgers designated outfielder Billy McKinney for assignment last week. MLB clubs faced a Friday deadline to set their 40-man rosters ahead of next month’s Rule 5 Draft. If McKinney passes through waivers, he could...
MLB・13 DAYS AGO
Dodgers Nation

Dodgers: Trea Turner Addresses The Possibility of Signing an Extension

When the Dodgers landed Trea Turner in a trade with the Nationals this year, they had to be planning for the future. Corey Seager was set to hit the free-agent market, and the consensus seemed to be that they had brought on his replacement for 2022. But beyond 2022 remains...
MLB・15 DAYS AGO
FanSided