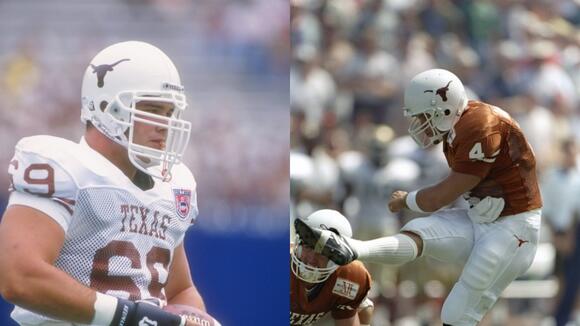 Texas and Oklahoma are set to kick off from the Cotton Bowl this Saturday in what could be the game that shapes the race for the Big 12 championship.

Can the Longhorns break their three-game skid against the Sooners and win the inside track to AT&T Stadium in Arlington this December?

Listen to two former Longhorn legends break it down here:

In this episode of the Longhorns Country Podcast, Matt is joined by a pair of Longhorn Legends to break down the matchup between Texas and Oklahoma in the Red River Showdown this weekend, and give their best memories from the rivalry.

In Part 1, former Horns offensive lineman Dan Neil joins the show to break down the matchups along the offensive and defensive lines, his impressions of new offensive line coach Kyle Flood, and more. In Part 2, Matt is joined by former Texas kicker Phil Dawson, who breaks down the special teams unit, Cameron Dicker, Jeff Banks, and more.

Both guys also talk about their time in the NFL and give their thoughts on Steve Sarkisian and the new direction of the program.

In a game filled with huge plays from both offenses, the Longhorn's defense found themselves on the wrong side of one too many

Texas showed that its offense could be incredible, and incredibly pedestrian, all in the same game as the Longhorns fell to the Sooners

The Longhorns and Sooners are set to face off in the Red River Showdown for the 117th time in their history. Follow along with live updates from the Longhorns Country staff here.

Welcome to the Longhorns Country Podcast, where we discuss anything and everything related to the Texas Longhorns: game coverage, breaking news, recruiting, you name it.

The managing editor and publishing of LonghornsCountry.com, Matt Galatzan, is your host and you can follow him on Twitter @matt_galatzan.

The Podcast is available on all of your major podcast platforms, including Apple Podcasts, Spotify, Stitcher, Google Podcasts, and many more.

Make sure to like, rate, and subscribe on your favorite platform so that you don't miss a single episode of the show.

The podcast can also be found on our host site on Megaphone, here.

The Texas Longhorns have been searching for their first commitment in the class of 2023.
AUSTIN, TX・2 DAYS AGO
LonghornsCountry

Why Ja'Tavion Sanders Might Be Texas' Top Receiving Option

Ja'Tavion Sanders could be ready to set records for Texas in 2022.
NFL・2 DAYS AGO
LonghornsCountry

The Texas Longhorns and Oklahoma Sooners have had some emotional games in their history, but coach Steve Sarkisian wants his players to avoid getting caught up in it all.
AUSTIN, TX・34 MINUTES AGO
Boston 25 News WFXT

As far as the NFL Players Association is concerned, changes to the league's concussion protocols cannot come soon enough. The union released a statement Friday confirming it had come to an agreement with the NFL on a change to prevent players from returning to a game If they show gross motor instability, which infamously happened with Tua Tagovailoa in Week 3.
NFL・17 MINUTES AGO

The Sooners are coming off a stinging loss to TCU in which the defense gave up 55 points and OU lost its second straight Big 12 game.
AUSTIN, TX・1 DAY AGO
Auburn Daily

How to watch the Auburn football game vs the Georgia Bulldogs

Here's how you can watch the Auburn football game vs the Georgia Bulldogs.
AUBURN, AL・17 MINUTES AGO
LonghornsCountry

The staff of Longhorns Country predicts the outcome of Saturday's game between the Texas Longhorns and the Oklahoma Sooners.
AUSTIN, TX・9 HOURS AGO
LonghornsCountry

Bijan Robinson's own mustard will partner with an iconic State Fair of Texas food.
TEXAS STATE・1 DAY AGO

Steve Sarkisian has full faith in Bert Auburn's leg to get the job done against Oklahoma.
AUSTIN, TX・1 DAY AGO