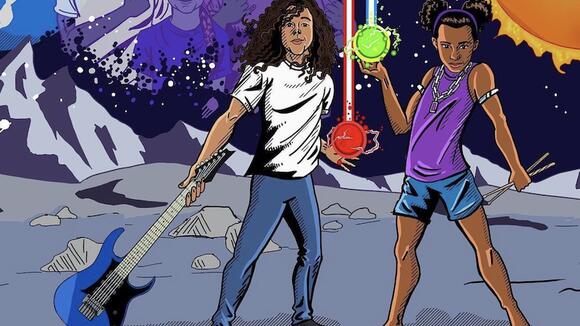 Nandi Bushell 's star just keeps getting brighter. The 11-year-old prodigy's released her latest song, and it's a collaboration with Roman Morello and his dad Tom Morello . The track is an anthem about the next generation fighting global warming and is called "The Children Will Rise Up." Its video features Jack Black and climate change activist Greta Thunberg . Epic!

Nandi takes lead vocals and drums while Roman shreds on guitar while images flash across the screen showing the impact of climate change.

In a statement under the YouTube video, Nandi explained how the song came to be:

I am so proud of myself and Roman Morello for writing our EPIC song with Tom Morello! We hope you love it and we really hope our song helps raise awareness for climate change! After learning about climate change at school I wanted to help make a difference. I wanted to write a song about how I felt about climate change and asked @Tom Morello and his son Roman Morello to collaborate with me. Once Roman and I had written the song we asked @JablinskiGames (Jack Black) and @Greta Thunberg if they would like to be in the music video! They loved our song and wanted to join us in raising awareness for climate change!

In an Instagram post , Nandi let fans know that the song is "In collaboration with Fridays For Future Brazil and England, branches of the global youth climate movement started by Greta Thunberg, proceeds from 'The Children Will Rise Up' will be donated to the nonprofit organisation 'The SOS Pantanal Institute' - 'Help Pantanal'"

Meanwhile, Tom teased the song by divulging "Tomorrow you will learn that I am the SECOND best guitarist in the Morello family."

Listen to "The Children Will Rise Up" above.

Over the summer, Nandi hinted that she was working on a project with Tom and Roman during her time in Los Angeles (where she also performed live with Foo Fighters . No Big Deal). She also recently participated in the WhyHunger Drum Together campaign, where she played The Beatles' "Come Together" with more than 100 legendary drummers, including Ringo Starr .

Rico Nasty has had the kind of week that would deflate most artists. Her opening sets on Playboi Carti's Narcissicist tour have been beset by rude and violent crowds but in every instance, she hasn't shied away from direct confrontation. Perhaps that's unsurprising for a rapper with such genuine and potent aggression in her music, but it's been heartening to see nonetheless. Those same vibes are present in Rico's latest single "Money," a collaboration with Flo Milli, out now.
MUSIC・11 DAYS AGO
Pitchfork

Cardi B is back with her first solo song since February’s “Up.” The new track, “Bet It,” opens Warner Records’ Bruised (Soundtrack From and Inspired by the Netflix Film). The album also features new songs from City Girls (“Scared”), Latto, Rapsody, H.E.R., Saweetie, Flo Milli, Erica Banks, Young M.A, Baby Tate, and more. Hear Cardi B’s “Bet It,” along with the full Bruised soundtrack, below.
MUSIC・10 DAYS AGO
Pitchfork

Ahead of her Saturday Night Live debut tomorrow night, Saweetie has released the single “Icy Chain.” The track is produced by Dr. Luke, Rocco Did It Again!, and Lil Aaron. Find “Icy Chain” below. Dr. Luke, who remains in a legal battle with Kesha, produced Saweetie’s Doja Cat collaboration “Best...
MUSIC・10 DAYS AGO
metalinjection

CKY will release a new single this Friday featuring the late and great ex-Turbonegro vocalist Hank Von Hell, and whose proceeds will benefit charity. Von Hell passed away over the weekend due to unspecified causes. "New CKY song featuring the late GREAT Hank von Hell on lead vocal. Streaming everywhere...
MUSIC・7 DAYS AGO

Freddie Mercury Under Pressure: Inside the Dying Queen Frontman's Quest to Live Forever Through Song

Freddie Mercury once asked, "What is this thing that builds our dreams, yet slips away from us?" And as the Queen frontman approached his final days, he felt those words more acutely than ever. Mercury died on Nov. 24, 1991, after an intensely (and intentionally) private struggle with AIDS. In...
MUSIC・5 DAYS AGO
iheart.com

TODAY (Thursday) The most important competition of your lives. is back with another star-studded project. He’s announced a new album, “The Atlas Underground Flood.”. The record serves as a sister piece to the Rage Against The Machine guitarist’s previous solo album “The Atlas Underground Fire.” Once again, he’s teaming up with a bunch of big names in rock, like Metallica’s Kirk Hammett, Rush’s Alex Lifeson, My Morning Jacket’s Jim James, Nathaniel Rateliff, Ben Harper, and more.
MUSIC・11 DAYS AGO
iHeartRadio

The third album in his trilogy comes out next month.
MUSIC・12 DAYS AGO

Despite just releasing a solo album, The Atlas Underground Fire, in October, Rage Against the Machine guitarist, liberal activist and friend of Ted Nugent Tom Morello has announced plans for another record arriving in December, and he’s dropped three songs from it all at once. Morello’s new effort, titled The...
MUSIC・11 DAYS AGO
UPI News

Nov. 17 (UPI) -- joined forces with Grandson to perform their single "Hold the Line" while appearing onThe Tonight Show Starring Jimmy Fallon. Morello played the guitar with Grandson handling the vocals during the performance on Tuesday. Grandson was shirtless with the words "Hold the Line" written on his body....
MUSIC・12 DAYS AGO
Pitchfork

Earl Sweatshirt is back with a new Black Noi$e–produced single and an accompanying music video. The visual for “2010” is directed and edited by Ryosuke Tanzawa, who’s directed videos for Mike, Navy Blue, KeiyaA, Wiki, and more. Check out “2010” below. Earl Sweatshirt has featured on a bunch of songs...
MUSIC・10 DAYS AGO
Pitchfork

British experimental pop duo Jockstrap have announced their signing to Rough Trade. The news comes with a single called “50/50,” which you can check out below. The signing announcement follows the 2020 release of Georgia Ellery and Taylor Skye’s EP Wicked City, which came out on Warp. Last year, Ellery joined Jamie xx for a live session—recorded while quarantining together—broadcast on BBC Radio 3.
MUSIC・12 DAYS AGO

Rod Wave Shares New Song "By Your Side"

The soul-trap wave certainly took over the rap game in 2021. While the lines between singing and rapping became increasingly blurred in the past 10 years, the new crop of rappers, specifically coming from the South, have taken the production of trap with the soul of R&B to create a new wave.
MUSIC・14 DAYS AGO
Pitchfork

Yendry and J Balvin have come together for the new song “Instinto,” produced by Lexus & Keityn. The track’s music video, directed by José Emilio Sagaró, was filmed in New York. Watch below. “A man and a woman long for a lust-filled love outside of their respective mundane relationships,” Yendry...
MUSIC・10 DAYS AGO
mxdwn.com

Behemoth frontman Adam Nergal has released his latest song called “Under The Spell” from his solo venture Me That Man. “Under The Spell” has a soft-blues, Americana-inspired production with heavy bass and snares. It also features hauntingly beautiful vocals from Mary Goore. The music video for the track is directed by Bartosz Hervy and depicts a daughter who puts a man under a spell from a television program she was watching. Check out the visual below.
MUSIC・12 DAYS AGO
wirx.com

Måneskin is releasing a new vinyl single featuring their latest song, “MAMMAMIA.”. The disc is due out this Friday, November 19, and also features a previously unreleased track called “Touch Me,” which the Italian rockers say they “can’t wait for you to hear.”. “MAMMAMIA” premiered this past October. It followed...
MUSIC・14 DAYS AGO
undertheradarmag.com

Madeline Kenney Shares New Song “I’ll Get Over It”

Oakland-based singer/songwriter Madeline Kenney has shared a new song, “I’ll Get Over It.” Listen below. In an interview with FADER, Kenney elaborates on the song, which deals with her uncertainty with regards to being a full-time musician during the pandemic: “The reality of that hit me sorta hard. And I had to step back and say, ‘Okay. What does making music mean to me? What do I prioritize? Am I chasing a career, or am I chasing a feeling? How do I want to look back on this part of my life, my growth as an artist?’”
MUSIC・12 DAYS AGO
Guitar World Magazine

Tom Morello has announced the release of a new collaborations album, Atlas Underground Flood, which will feature Alex Lifeson, Kirk Hammett, Ben Harper, Rodrigo y Gabriela and Jim James. Due to arrive December 3, the new record is billed as the sister project to The Atlas Underground Fire, which was...
MUSIC・12 DAYS AGO
MetalSucks

Arjen Lucassen’s Star One Featuring Arjen Lucassen have released a new single, “Fate of Man.” Like all songs by Star One, it’s inspired by a famous work of sci-fi… in this case, The Terminator. And I can say with total confidence that this is the best metal song at least partially inspired by The Terminator that I can recall offhand other than The Acacia Strain’s “Skynet.”
MUSIC・12 DAYS AGO
Spin

Earlier this year, Eddie Vedder released a new song “Long Way,” with the help of an all-star backing band. He unveiled that band at Ohana Festival in September, which included Josh Klinghoffer, Andrew Watt, Chad Smith, Pino Palladino and Glen Hansard. At the Vedder-curated event, the group tore through a bunch of covers during their two-nights headlining.
MUSIC・11 DAYS AGO