The Real World ‘s second Homecoming is almost upon us , and this time, we’re jet-setting from the streets of New York to sunny L.A.

On the heels of its two-season renewal news comes the official premiere date for Season 2, which will reunite members of the original Los Angeles cast. To find out what happens when people stop being polite, catch The Real World Homecoming: Los Angeles when it premieres Wednesday, Nov. 24 on Paramount+.

Along with that date comes the first official teaser (embedded above), which shows the cast getting back to their old dramatic antics. “If you let me talk and stop f–king cutting me off, I shall return,” David Edwards tells the roommates. (This always was one of the series’ more tumultuous casts. Prepare for fireworks, people!)

Seven of the nine roommates will participate in the multi-episode spinoff, including Beth Anthony, Beth Stolarczyk, Edwards, Glen Naessens, Irene Berrera-Kearns, Jon Brennan and Basketball Wives’ Tami Roman. And the cherry on top? They’ll be rendezvousing in the same iconic Venice Beach house they cohabitated in 1993. ( The Real World: Los Angeles accumulated nine strangers after David was infamously kicked out and replaced with Glen following a spat with Tami. Irene also left the show after she got married, and was replaced by Beth A.)

Noticeably absent from the series are former UCLA student Aaron Behle, and Irish journalist Dominic Griffin. Reasons for their no shows have yet to be announced, though a report indicates that Griffin may make a guest appearance “at some point.”

Just seven months ago, the Homecoming spinoff reunited the New York cast in its original loft sans Eric Nies, whose COVID diagnosis prevented him from officially moving in. He did, however, appear via webcam throughout the series.

Happy to see the L.A. cast again? Which cast do you want to see get the Homecoming treatment? Watch the teaser by pressing PLAY above, then sound off in the Comments! 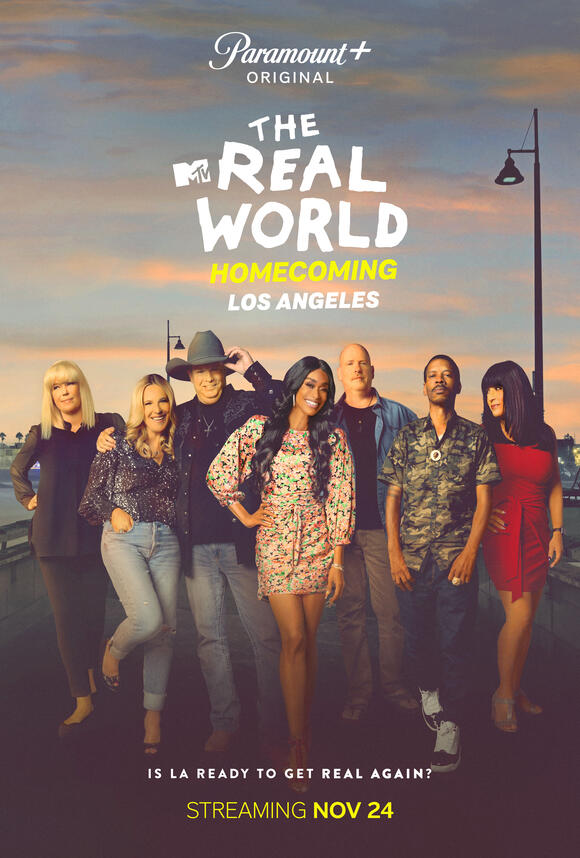 When Does La Brea Season 2 Start? (And Will It Still Film in Australia?)

La Brea‘s Season 1 finale had barely drawn to a close, and already many a TVLine reader was asking: “When does Season 2 start?!”. Well, we have the answer to that, plus many related questions about the return of this TV season’s top-rated new drama. NBC’s La Brea stars Natalie...
TV SERIES・6 DAYS AGO
TVLine

The following contains major spoilers from the Season 1 finale of NBC’s La Brea. The good news, as Season 1 of NBC’s La Brea came to a close? Isaiah (aka wee Gavin) did make it to the Topanga mountain top and stepped into the light portal, thus ensuring the future existence of Josh and Izzy, who in turn immediately rebounding from, like, bad tummy aches. The bad news? Josh barely had a moment to celebrate his restored future when the light crack that Isaiah had entered abruptly pulsated, disappearing Josh, Riley and map-toting Lily who were standing nearby. Elsewhere in the land...
BREA, CA・7 DAYS AGO
TVLine

More than two years after dropping Season 1, Hulu’s Dollface has at long last set a premiere date for its second season. Season 2 was ordered back in January 2020, but production didn’t get underway in earnest until July 2021 (#pandemic). Now, Hulu has announced, Season 2 will release all 10 of its episodes on Friday, Feb. 11, 2022. Season 2 of the comedy will follow Jules (played by Kat Dennings) and her best friends — “post-pandemic, post-heartbreak” and heading toward turning 30. Having successfully reunited with her friends (played by Brenda Song, Shay Mitchell, and Esther Povitsky), Jules must now balance...
TV SERIES・14 DAYS AGO
Us Weekly

A reunion nearly 20 years in the making. Ahead of The Real World Homecoming: Los Angeles premiere, Beth Stolarczyk opened up about reuniting with her cast in the same iconic Venice Beach house that the group lived in in 1993. Memorable 'The Real World' Stars: Where Are They Now?. “I...
LOS ANGELES, CA・13 DAYS AGO

‘NCIS: Los Angeles’: Is One of Hetty’s Major Enemies About to Return?

NCIS: Los Angeles’s Hetty Lange (Linda Hunt) has faced some major villains over the course of the show. And one of the enemies she disliked most was the fallen former agent Paul Angelo (Daniel Henney). In Season 5, the two characters butted heads, but Angelo survived the encounter and is...
TV SERIES・13 DAYS AGO
Primetimer

Paramount+ may still be experiencing its fair share of growing pains, but when it comes to Gen X nostagia content, it's unmatched among its peers. And that all began last March with a stellar reunion of the very first cast of The Real World in The Real World Homecoming: New York. Despite some resurfaced ugliness from Becky and the fact that a COVID-positive Eric Nies had to Skype in from a nearby hotel room, the original roomates enjoyed a reunion that was full of nostalgia and newfound perspectives on the reality TV genre they helped birth.
LOS ANGELES, CA・14 DAYS AGO
Primetimer

Tami Roman kept turning down The Real World Homecoming: Los Angeles until she realized her castmates “were really the pioneers of the genre"

“So I felt there was no harm, no foul in going back to finish what I helped start," says Roman, who revisits the David Edwards blanket incident on the Paramount+ series. Roman, 51, had previously retired from reality after appearing on Celebrity Wife Swap, Marriage Boot Camp and Basketball Wives. Roman says Season 2 of The Real World was, like Season 1, ahead of its time. “We did delve back into race,” Roman says. “We did delve back into the abortion situation. We did delve back into the issues with #MeToo and that particular incident with David. A lot of people saw me get my mouth wired and deal with bulimia, body dysmorphia, and eating disorders. We talked about all that this time around. But with a more respectful eye.”
LOS ANGELES, CA・13 DAYS AGO
TV Fanatic

It's been a long time since we've had a fresh installment of Euphoria. The award-winning Zendaya-led drama series first premiered in the summer of 2019. It landed a quick renewal because it was a big hit with younger viewers HBO was trying to capture. Unfortunately, the pandemic meant that production...
TV SERIES・14 DAYS AGO

After an extended wait, fans now have answers. Euphoria, which wrapped its inaugural season back in August of 2019, will return to HBO for its second season in January. HBO also shared a new teaser for the acclaimed Sam Levinson-created series, starring Zendaya. And while it has indeed been more than two years since the first season ended, fans were generously given a pair of “bridge episodes” back in December 2020 and January of this year, respectively. The first, titled “Trouble Don’t Last Always,” focused on Zendaya’s character Rue while the second—co-written by Hunter Schafer—focused on Schafer’s character Jules.
TV SERIES・14 DAYS AGO
MassLive.com

‘The Beatles’ docuseries ‘Get Back’ comes to Disney+ this week: How to watch, premiere date, trailer

A docuseries featuring the final days of The Beatles is coming to Disney+ this week. “The Beatles: Get Back” premieres on Disney+ Thursday, Nov. 25. The film is directed by three-time Oscar winner Peter Jackson, who directed “The Lord of the Rings” trilogy. The three-part documentary series, according to the...
TV & VIDEOS・12 DAYS AGO
The Staten Island Advance

How to watch and stream RuPaul’s ‘Queen of the Universe’ competition: Premiere date, celebrity judges, trailer

Drag queens are coming together for a competition premiering this week, produced by RuPaul. “Queen of the Universe” premieres on Paramount+ on Thursday, Dec. 2. The competition judges the contestants on their ability to perform without lip syncing. They will be judged on their real singing voices, stage presence and overall performance.
TV SHOWS・5 DAYS AGO
Primetimer

Watching Edwards' flippant reaction in the Paramount+ series to the incident that led to his ouster in 1993 is infuriating since it comes four years after the #MeToo movement, says Kyndall Cunningham. "It’s astonishing watching the last four years of dialogue around the topic of sexual misconduct completely collapse on a self-proclaimed progressive platform such as Real World," says Cunningham. "What should be a moment of accountability and steps toward healing rather oppositely feels like a documentary on the dangers of #MeToo and a desperate attempt to find a gray area in an uncomplicated matter."
LOS ANGELES, CA・4 DAYS AGO
The Oregonian

There’s a new Santa in town and a new streamed series all about him. “Santa Inc.” premieres on HBO Max on Thursday, Dec. 2. The series is about Candy Smalls, the highest-ranking female elf in the North Pole who dreams of taking over for Santa Claus. Candy Smalls makes her...
TV SERIES・5 DAYS AGO
toofab.com

As David's erratic behavior escalates, his roommates remove all alcohol from the house. David Edwards was already facing an uphill battle reuniting with his former "Real World: Los Angeles" costars for "The Real World Homecoming: Los Angeles" -- and, just as Jon Brennan pointed out, his "unpredictable" behavior is once again causing concern.
TV & VIDEOS・5 HOURS AGO

‘Saved by the Bell’ revival returns to Peacock: How to watch Season 2, premiere date, cast, trailer

The Bayside High crew is back in class and hanging out at The Max. “Saved by the Bell” Season 2 premieres on Peacock on Wednesday, Nov. 24. The rebooted series — based on ‘90s series of the same name — is set at the same high school. The coming-of-age sitcom...
TV & VIDEOS・13 DAYS AGO
TVLine

Euphoria‘s Rue dances and lip-syncs her way through Frank Sinatra’s “Call Me Irresponsible” at the start of the HBO drama’s Season 2 trailer, and if that’s not a new level of self-awareness, we don’t know what is. The troubled teen and her friends are back for another go in the new video, which the premium cabler posted on Twitter Tuesday. We also get, at long last, the sophomore season’s premiere date: Sunday, Jan. 9. SEASON 2. JANUARY 9 ON @HBOMAX. pic.twitter.com/CQ8o0nTuIG — euphoria (@euphoriaHBO) November 23, 2021 The roughly minute-long preview shows Zendaya’s Rue tripping the light fantastic — or maybe just tripping —...
TV SERIES・14 DAYS AGO
thetvaddict.com

DYNASTY returns for a new season in December 2021 on The CW, while THE BOOK OF BOBA FETT will be debuting on Disney+. Related: What is Coming to Netflix Canada, Netflix U.S., Hulu, HBO Max, Crave and Prime Video Canada in December 2021. Wednesday, December 1. Zoey’s Extraordinary Christmas (The...
TV & VIDEOS・5 DAYS AGO
TheWrap

Netflix’s spinoff of History Channel’s “Vikings,” called “Vikings: Valhalla,” will premiere Friday, Feb. 25, the streamer said. A spinoff of the popular History show “Vikings,” which ran for six seasons, the new series takes place a century after the events of that flagship show and chronicles the legends of some of the most iconic vikings who ever lived. Laura Berlin stars as Emma of Normandy, Sam Corlett plays Leif Eriksson, and Bradley Freegard is King Canute “the Great.”
TV SERIES・7 DAYS AGO