Could Social Security recipients get another $1,400 stimulus check? 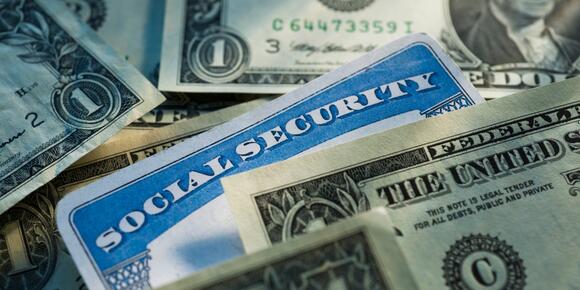 While the odds of the general populace getting a fourth stimulus check are unlikely, an influential, nonpartisan senior advocacy group is lobbying Congress to send one more $1,400 check to people who receive Social Security to help them battle inflation.

The Senior Citizens League has sent a letter to members of the U.S. House of Representatives and U.S. Senate, urging them to consider the age-focused stimulus.

“We’ve heard from thousands of them [seniors] who have exhausted their retirement savings, who have started eating just one meal a day, started cutting their pills in half because they can’t afford their prescription drugs, to list just a few of the drastic steps so many have had to take because of what inflation has done to them this year,” the letter reads. “Many have written to us that ‘our government has forgotten about us.’”

Next year’s Social Security checks will have one of the biggest cost-of-living adjustments in decades, with increases of more than 6%, but the Senior Citizens League says it’s not enough. That’s because, in part, the larger Social Security payment could bump some seniors into higher tax brackets, resulting in surcharges to their Medicare Part B premiums.

Never miss a story about Congress

The group acknowledges the chances of a special stimulus check being approved this year are slim, but it’s hoping to rally seniors to make this a major issue in 2022 that will build congressional support.

It’s not just seniors who are hoping for a fourth stimulus check, though. More than 2.9 million people have signed a Change.org petition calling for recurring $2,000 payments to adults and $1,000 payments for children.

The Biden administration has brushed off talk of a fourth round of stimulus checks, however, pointing instead to the Child Tax Credit, which began making the first of six payments into the bank accounts of parents on July 15, and the American Rescue Plan, which is designed to stimulate the economy.

they won't do it. government cares more about unemployed and people with children than they do seniors. I'm not degrading those other groups but why do seniors have to choose between billa, meals, or medicine because all the money paid in was stolen by our own government for their own interests. they have known this was a problem and yet they do nothing. seems like they want seniors and disabled folk to vanish that way they can obliterate social security.

with around 7 million job openings won't happen, but seniors could use some help the old can't work they paid there dues..!

Never miss a story: Follow your favorite topics and authors to get a personalized email with the journalism that matters most to you. Long waits, delayed refunds and confusion made taxpayer interactions with the Internal Revenue Service, never the most joyous of exchanges, more frustrating than ever. And that could just be a warmup for what’s to come this year, says a new watchdog report.
INCOME TAX・7 DAYS AGO
Fortune

More Americans can now cover a $1,000 emergency, but it’s still less than half

Never miss a story: Follow your favorite topics and authors to get a personalized email with the journalism that matters most to you. More Americans can now afford a $1,000 emergency expense, but that goal still remains out of reach for the majority of U.S. households. That’s the highest proportion...
BUSINESS・21 HOURS AGO
Fortune

Why Singapore, the world’s ‘most crypto-friendly economy,’ is shutting down Bitcoin ATMs

Never miss a story: Follow your favorite topics and authors to get a personalized email with the journalism that matters most to you. On Tuesday, Singapore’s leading operators of crypto ATMs were forced to shut down their cash machines, after the Monetary Authority of Singapore (MAS) outlawed the cash-to-crypto terminals as part of a wider crackdown on advertising cryptocurrency to the public.
MARKETS・20 HOURS AGO
The Motley Fool

Social Security could look a little different for you in January 2022.
BUSINESS・2 DAYS AGO

As inflation continues to surge among rising cases of Omicron, the third stimulus checks round seem to have done little to save people from financial distress. With decreasing avenues of income, people are now hoping that the government sends in more aid in the form of the fourth round of stimulus checks. Being hit the hardest amid the pandemic due to limited income, senior citizens are also among the people pushing for stimulus payments for themselves.
INCOME TAX・6 DAYS AGO
BGR.com

The Los Angeles Times Editorial Board became the latest entity, in a new commentary this week, calling on Congress to quickly revive President Biden's expanded child tax credit. Which, as everyone probably knows by now, this month reverted back to its pre-Covid max amount of $2,000 (instead of $3,600). That also means, at least for the time being, no new federal stimulus check in 2022 is coming. At least, not yet.
LOS ANGELES, CA・8 DAYS AGO
theeastcountygazette.com

Stimulus Checks of $1,400 Are Sent Across the U.S. to Eligible Americans

Those who were eligible for the third round of stimulus checks last year but did not receive them will be eligible to receive a $1,400 stimulus check this year. Tax returns for eligible taxpayers in 2021 must be filed in order to release these checks in 2022. What You Need...
INCOME TAX・7 DAYS AGO
leedaily.com

– Additional Covid-19 stimulus is being considered by Congress in the government spending bill. – In December, the National jobless rate declines to 3.9 percent and this is the lowest rate since the pandemic started. – Build Back Better plan approved by House would limit insulin prices to $35 per...
INCOME TAX・8 DAYS AGO

Social Security checks get the largest boost since the 1980s. Learn why and by how much

Social Security checks are getting bigger, starting in January 2022. The increase in payments is the biggest boost for the benefits since the 1980s. A new cost of living adjustment (COLA) has increased payments by 5.9%, about $93 more per month ($1,116 more per year) for seniors and other beneficiaries. The Social Security Administration announced the adjustment via Twitter on Jan. 1.
BUSINESS・9 DAYS AGO
foodcontessa.com

Check When Social Security Beneficiaries Will Receive A $1,400 Payment In 2022!

Retirees all around the United States are feeling the pinch as a result of rising prices. The rise in COVID-19 cases has made things worse. After three rounds of stimulus funds, the federal government decided to end them. A new round of stimulus checks is being forced upon Congress by...
BUSINESS・12 DAYS AGO
madison

Earning more money is usually considered a good thing. But if you're retired, high paychecks could have an adverse impact on your Social Security income. Specifically, you could end up temporarily or permanently giving up some benefits if you make too much money. How could being a high earner hurt...
PERSONAL FINANCE・11 DAYS AGO
FingerLakes1.com

Delaying a Social Security claim could be more important than ever starting in 2022.
BUSINESS・1 DAY AGO
The Motley Fool

The quick answer? Yes. But whether you'd want to is a different story.
PERSONAL FINANCE・2 DAYS AGO
GOBankingRates

If you want to retire comfortably, then you need to start planning now. By understanding how to maximize your Social Security benefits, you won't have to worry.
PERSONAL FINANCE・2 DAYS AGO
GOBankingRates

Social Security: How To Boost Your Benefit by $800

The average retiree collects around $1,500 in Social Security benefits per month. This can range up or down depending on lifetime earnings, and importantly, when you decide to start taking...
BUSINESS・12 HOURS AGO
The US Sun

BUMPED-UP social security payments worth up to $1,657 are being sent out to around 70million Americans this month, with many arriving TODAY. Retired workers will now see, on average, their monthly check increase from $1,565 because the new cost-of-living adjustment (Cola) means checks are 5.9 percent higher compared to 2021.
PERSONAL FINANCE・6 DAYS AGO
GOBankingRates

If your spouse passes away and you are the surviving spouse of the worker, you can receive your spouse's Social Security benefits after they pass. An important caveat: your spouse must have worked...
SOCIAL SECURITY・7 DAYS AGO
Disability Scoop

Are you in line for a massive payday?
PERSONAL FINANCE・16 HOURS AGO