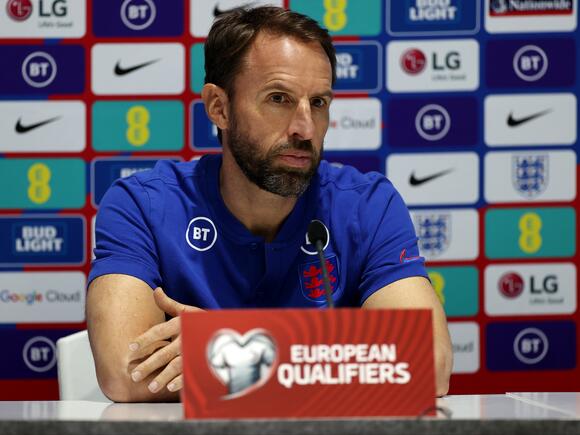 Gareth Southgate has rejected the suggestion that 'most' of his England squad are unvaccinated but admitted that the issue is “nuanced” one among the players.

Vaccination rates vary across Premier League clubs and Roma’s Tammy Abraham is the only member of the squad for World Cup qualifiers against Andorra and Hungary to confirm that he is fully vaccinated.

Other players have insisted that vaccination status is a “personal issue”, though some inside the game like Liverpool manager Jurgen Klopp have likened going without the vaccine to drink driving.

Southgate dimissed the claim that a majority of his squad are unvaccinated but, like several of his players, he stressed that vaccination was a complicated issue.

“I'm not sure that's totally accurate in terms of 'most' but I think everyone knows where I stand on the subject,” he said ahead of England's qualifier in Andorra on Saturday.

“To move out of the pandemic, the only way was a vaccination programme so I think that was essential.

“There is then the complication that there are a lot of individual circumstances around that and I understand that some people would be anxious, perhaps.

“I'm a believer that that's the right thing to do but I understand that there were other topics we've talked about where everybody was aligned and we would all have a very clear view as a team. With this, it's a little bit more nuanced.

“Lots of people have had the virus, so maybe they're feeling antibodies are high in their own bodies. Lots of people might have individual medical conditions, some people in the country might have religious reasons, so it's a complicated area.

“My belief is that the route out of the pandemic is a vaccination programme, I'm yet to hear anybody offer an alternative, and there's not a lot more we can say than that really.”

Southgate used his platform to publicly encourage vaccination after England’s run to the European Championship final and later said he received more abuse for that short video message than his management of the team during the tournament.

England boss Gareth Southgate has today confirmed that he has signed a new contract with the England national side until December 2024, alongside his assistant Steve Holland. There were recent talks surrounding Southgate's future, with many believing that the 51-year-old would step down from his position after the Qatar 2022 World Cup.
SPORTS・14 DAYS AGO
AFP

Five years after being thrown in at the deep end to tackle the chaos engulfing England, Gareth Southgate on Monday extended his time in charge of a team that is going places. "There is a nasty side to Gareth and he was spot-on to do that," said former England captain Alan Shearer.
PREMIER LEAGUE・14 DAYS AGO
newschain

Gareth Southgate insists he wants “to deliver value for money” after signing a new two-year contract to remain as England manager until December 2024. The 51-year-old guided England to their first major final in 55 years at Euro 2020 and his new deal, reported to have increased his salary to £5-6million, is performance related.
PREMIER LEAGUE・14 DAYS AGO
mix929.com

(Reuters) – England manager Gareth Southgate said he would like to return to club management at some point and that he would be motivated to “prove people wrong” about his track record in domestic football. Southgate, who was handed the England job on a full-time basis in 2016, signed a...
PREMIER LEAGUE・14 DAYS AGO

‘Just enjoy the ride’: why club football can wait for Gareth Southgate

To paraphrase Gareth Southgate, people only remember the bloody relegation. It came at Middlesbrough in 2009 – after two seasons of mid-table Premier League respectability – in what remains his first and only job in club management. There is an itch to return to the division, “an obvious challenge”, as the England manager puts it.
PREMIER LEAGUE・14 DAYS AGO
SkySports

A charity auction attended by England manager Gareth Southgate and hosted by Sky Sports News anchor Hayley McQueen has so far raised £139,000 for Alzheimer's Society. Held at the Oval, the event kicked off fundraising activity for Alzheimer's Society's Sport United Against Dementia (SUAD) - an initiative that aims to increase awareness of available dementia support, make sports dementia friendly, and fund and support research into any links between sport and dementia.
CHARITIES・7 DAYS AGO
SkySports

England manager Gareth Southgate has won the inaugural Sky | Kick It Out award for equality and inclusion. Sky partnered with Kick It Out to present the new award at this year's Sports Journalists' Association (SJA) British Sports Awards which were held in Central London on Thursday. The accolade recognises...
SPORTS・5 DAYS AGO
BBC

When England boss Gareth Southgate was asked about Jordan Pickford's form 14 months ago, his praise for the Everton goalkeeper revealed a potentially bigger problem. In October 2020, Pickford had been through the mill. He had been vilified by fans for injuring Liverpool defender Virgil van Dijk, and after several errors at club level was then dropped by Toffees boss Carlo Ancelotti for the first time after 120 starts.
PREMIER LEAGUE・1 DAY AGO

If any Everton manager could ill afford the club's worst home defeat to Liverpool for 39 years, it was Rafael Benitez. The Spaniard was not accepted by many Toffees supporters from the minute he was appointed in June due to his previous role as a Champions League-winning manager with Liverpool. A bright start briefly quietened the doubters. Everton sat fifth in the Premier League during the October international break having lost just one of their opening seven games. They have taken just one point from the seven games since to plummet to 14th, just five points clear of the relegation zone ahead of the weekend fixtures.
PREMIER LEAGUE・2 DAYS AGO
Telegraph

The visitors are beaten by the lowest-ranked team in the Europa Conference League. Kane's equalises in the second half but Spurs are stunned with the final kick of the match. As Antonio Conte folded his arms against the Slovenian chill, muttering to himself while his players floundered in front of him, he might well have been wondering whether this Europa Conference League is ever going to be worth the hassle.
UEFA・12 DAYS AGO
BBC

Queues for booster doses and Covid vaccines across East of England

Long queues have been reported at vaccination centres as people concerned about the new coronavirus variant Omicron tried to get jabs. In Colchester, Norwich and Cambridge people formed lines to get a booster - or even their first dose. The government announced it will be making booster vaccinations available to...
PUBLIC HEALTH・6 DAYS AGO
BBC

Ashes: Alex Carey called up as Australia wicketkeeper in squad to face England

Australia wicketkeeper Alex Carey is set to make his Test debut after being added to the squad for the first Ashes Test against England in Brisbane. He replaces Tim Paine, who is taking a break from cricket after stepping down as Test captain over a historical investigation into sexually explicit texts to a female colleague.
SPORTS・5 DAYS AGO

Marcel Brands has left his role as director of football at Everton the club confirmed late on Sunday night.The Dutchman had been at Goodison Park since the summer of 2018 and was involved in the Toffees spending close to £300million during that period.It failed to translate into on-field success, however, and with Everton struggling this season, Brands was relieved of his duties.“Everton Football Club can confirm that Marcel Brands has left his post as director of football,” a club statement read.“The owner and directors would like to thank Marcel for the service he has given to the club over...
PREMIER LEAGUE・1 DAY AGO
fourfourtwo.com

Children in some parts of England are three times more likely to be vaccinated than others, figures from the House of Commons library show, prompting Bridget Phillipson, Labour’s newly appointed shadow education secretary, to criticise the government for its lacklustre efforts to vaccinate young teenagers. The figures – collated by...
LOTTERY・1 DAY AGO
San Diego Union-Tribune

Antonio Conte's unbeaten run in the Premier League at Tottenham goes on and so does Harry Kane's goal drought
SAN DIEGO, CA・2 DAYS AGO
The Independent

The clock is ticking for Rafa Benitez. Yesterday’s departure of Marcel Brands, Goodison’s director of football, puts the spotlight firmly on the Everton manager.Benitez’s team host Arsenal tonight and are aiming to break a winless streak that goes back to September. Their most recent defeat, a 4-1 pummelling by Liverpool, inflamed an already restive fanbase and precipitated the sacking of Brands. The Dutchman’s 3½ years on Merseyside was not a success but Brands was still a scapegoat.Since Farhad Moshiri bought into the club five years ago, Everton have spent more than half a billion in the transfer market and are...
PREMIER LEAGUE・1 DAY AGO
The Independent

There was a change at the top of the Premier League table for the first time since October after Chelsea faltered while Manchester City and Liverpool kept up their fine recent form with away wins.Ralf Rangnick got his tenure at Manchester United off to a successful start and Newcastle were able to end their long wait for a victory.Here, the PA news agency takes a look at five things we learned this weekend.City hit summitFULL TIME | A Bernardo brace and a goal from Sterling see us go to the top of the table! 🔥🔝🐝 1-3 🔵 #ManCity pic.twitter.com/aaKvYTTWb5— Manchester...
PREMIER LEAGUE・1 DAY AGO
San Diego Union-Tribune

Benitez given 'full support' by Everton as team flounders

Rafa Benitez has been given the "full support" of Everton's board amid a drastic downturn in the team's results in the Premier League
SAN DIEGO, CA・1 DAY AGO