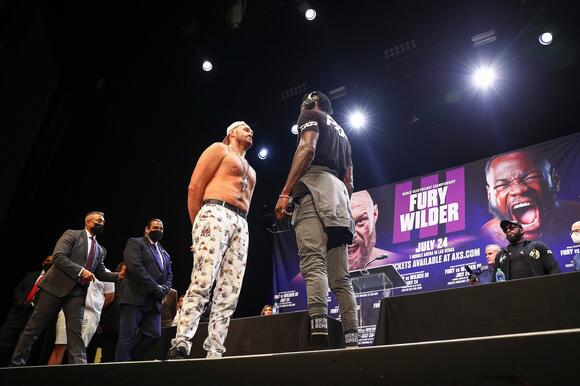 Heavyweight fighters Tyson Fury and Deontay Wilder will not face off at their weigh-in as it “dehumanises” them, according to promoter Bob Arum .

Fury and Wilder will compete in their trilogy fight on Saturday where the British star will defend his WBC belt . The face off also didn’t take place at the pair’s press conference on Wednesday where Fury got under Wilder’s skin.

Arum told the BBC : “The fighters will not face off, both promotional companies agree... I really object to taking these fighters and making them like pitdogs, facing each other, what does that mean?

“We are always looking for trouble, why are we doing that? Do you see in professional American Football the two quarterbacks face off? They are not animals, they are sportsmen. I think they are unnecessary, it dehumanises the fighters and I don’t think its good for the sport.”

“Deep down in his soul, he knows that he lost and he’ll lose again. After this fight he’ll be back working in that fast food chain that he was working at earlier on in his career. It’s retirement for him,” the Brit said.

“You’re in denial and you’re getting knocked out. Do yourself a favour and retire, your legacy’s in bits, all the excuses, you’ve been destroyed. No one’s even believed you, everyone’s laughing at you. You’re a weak man.”

And Wilder retorted that he looks forward to Saturday’s battle as he has everything to gain.

“Prepare yourself on the battlefield and get ready for war because this is going to be an amazing fight. As you see, I’m wearing my red outfit so I want to beckon blood and I’m looking forward to it.”

Anthony Joshua believes Deontay Wilder took the wrong tactics into his trilogy fight against Tyson Fury. Wilder, under new trainer Malik Scott, attempted to execute a more methodical approach, repeatedly jabbing Fury to the body in hope of draining the speed from the Briton’s legs.However, Joshua believes modern heavyweights struggle to maintain a high output over the course of twelve rounds and that it was Wilder who suffered fatigue as the fight wore on as a result. During a JD Sports round table, he said: “Not in this day and age [can heavyweights jab for 12 rounds] because...
COMBAT SPORTS・13 DAYS AGO
sjvsun.com

Olympic silver medalist Richard Torrez Jr. has signed with Top Rank Boxing, signaling the start of his professional career. The 22-year-old Tulare native agreed to a multi-year deal with Top Rank, founded by famed promoter Bob Arum, on Nov. 17, just a few months after Torrez Jr. made it to the gold medal bout at the Tokyo Olympics over the summer.
TULARE, CA・15 DAYS AGO
Boxing Scene

Top Rank's CEO Bob Arum, who co-promotes WBC heavyweight champion Tyson Fury, would like to see the boxer fight at least three times in 2022. Fury has only fought twice in the last two years - mostly due to the COVID-19 pandemic. He saw action in February 2020, when he...
COMBAT SPORTS・7 DAYS AGO
Yardbarker

Tyson Fury has branded Anthony Joshua a “mug” following his comments on Deontay Wilder’s defeat to the Gypsy King. Fury and AJ appeared to have smoothed over their relationship after the WBC heavyweight champion offered to train his rival for his rematch with Oleksandr Usyk. However, things have fast turned...
COMBAT SPORTS・12 DAYS AGO

Bob Arum: I Think The Most Lucrative Fight For Terence Crawford Would Be Josh Taylor

LAS VEGAS – All anyone wanted to ask Bob Arum about in the immediate aftermath of Terence Crawford’s 10th-round technical knockout of Shawn Porter was the possibility of Crawford and Errol Spence Jr. finally fighting. This was mere minutes before Crawford all but said he won’t continue his promotional partnership...
COMBAT SPORTS・13 DAYS AGO
fightsports.tv

Bob Arum Says Terence Crawford Is Not A PPV Draw, Lost Money On ‘Every Fight’

Terence Crawford is one of the best fighters “in the world,” but for some reason he is not a pay-per-view draw. That’s what Top Rank CEO Bob Arum told talkSPORT when asked if he thinks he’ll work with Crawford, the WBO welterweight champion, going forward. “We’ve put him in the...
COMBAT SPORTS・6 DAYS AGO
The Independent

Tommy Fury would lose to “dozens” of young fighters, according to Bob Arum.Former Love Island contestant Fury, half-brother of heavyweight champion Tyson, is set to box Youtuber Jake Paul on 18 December.Ahead of the bout in Tampa, Florida, Fury is 7-0 while Paul is 4-0 with wins against former MMA champions Ben Askren and Tyron Woodley, ex-NBA star Nate Robinson, and fellow YouTuber AnEsonGib.Arum, co-promoter of Tyson Fury, has admitted to being uncertain around Tommy Fury’s level in the ring, saying per talkSPORT: “We don’t know if Tommy Fury would ever be an elite boxer. “I mean, I could...
COMBAT SPORTS・6 DAYS AGO
worldboxingnews.net

Former long-reigning champion Deontay Wilder has retained his place at the top of the WBC heavyweight rankings for a further month. The latest list, confirmed after the WBC Convention, sees Wilder top of the pile despite losing to current ruler Tyson Fury a second time. DEONTAY WILDER. Wilder put on...
DILLIAN WHYTE・7 DAYS AGO

In his Hall of Fame career, Bob Arum has promoted most of the biggest attractions in boxing. The range of champions who have fought under his Top Rank banner include Muhammad Ali, Marvin Hagler and Oscar de la Hoya. On Wednesday, Arum turns 90 years old and remains as active as he was during Ali’s heyday.
NEW YORK CITY, NY・18 HOURS AGO
BoxingNews24.com

By Matt Lieberman: Top Rank promoter Bob Arum says they’re trying to work a deal for Anthony Joshua to step aside so that WBC heavyweight champion Tyson Fury can face IBF/WBA/WBO champion Oleksandr Usyk for the undisputed championship in March in Saudi Arabia. Conversations have already begun to get former...
COMBAT SPORTS・4 DAYS AGO
thaboxingvoice.com

The WBC has ordered the start of the free negotiating period pursuant to the rules & regulations for the mandatory bout between heavyweight champ Tyson Fury & interim champ Dillian Whyte. Deontay Wilder: “I have accomplished my goals in this sport. I told my daughter when she was one that I’d be a champion and able to support her beyond belief. I’ve done that. Should I give it a go one more time, or should I just retire and focus on other things?” [@LOLNetwork]
COMBAT SPORTS・10 HOURS AGO
worldboxingnews.net

Amidst talk of a super-fight between former heavyweight champions Andy Ruiz Jr. and Deontay Wilder, a new link has come in the shape of an ex-foe. Johann Duhaupas is a rugged Frenchman who damaged the face of Wilder considerably in a 2015 bruiser. He is now on the prowl for a match-up with Ruiz.
COMBAT SPORTS・8 DAYS AGO

Bob Arum has claimed that Tyson Fury would defeat Muhammad Ali, were the two to meet in the ring during their respective primes. Fury is widely considered the best heavyweight boxer on the planet right now. Ali, on the other hand, is considered the greatest of all-time. Both fighters possess(ed)...
COMBAT SPORTS・2 DAYS AGO
Boxing Scene

Deontay Wilder Admits There Are 'Mixed Feelings' On Fighting Again

Former WBC heavyweight champion Deontay Wilder, 36-years-old, admits that he's on the fence with respect to fighting again in the future. In October, Wilder took part in one of the best heavyweight fights in recent years. He was knocked out in the eleventh round of his trilogy fight with Tyson Fury.
COMBAT SPORTS・13 HOURS AGO
worldboxingnews.net

The best heavyweight star emerging from US shores since Deontay Wilder has promised to steal the show at Madison Square Garden on December 11. By his admission, Jared Anderson gets known as ‘The Real Big Baby.’ He has knocked out all ten of his opponents so far. He’s also earned significant praise from the current heavyweight king Tyson Fury.
COMBAT SPORTS・11 DAYS AGO
BoxingNews24.com

Former lightweight world champion and WBN Fighter of the Year for 2020, Teofimo Lopez, was compared to Deontay Wilder this weekend. Fans jumped on a post by Lopez where ‘The Takeover’ stated he’d ‘almost’ died when fighting George Kambosos Jr. in New York. Detractors of the young star complained that...
COMBAT SPORTS・3 DAYS AGO
The Ring Magazine

It seems possible after a recent appearance on comedian Kevin Hart’s Cold as Balls show on the Laugh Out Loud Network. The 36-year-old Wilder (42-2-1, 41 KOs), of Tuscaloosa, Alabama, made 10 defenses of the WBC heavyweight title before suffering a pair of knockout defeats to Tyson Fury. On October 9, Wilder was knocked out in the 11th round by the Englishman in one of the greatest heavyweight slugfests of all-time that saw both fighters hit the deck for a combined five knockdowns in their Las Vegas trilogy showdown.
TUSCALOOSA, AL・5 HOURS AGO
worldboxingnews.net

LAS VEGAS — Junior lightweight world titleholder Shakur Stevenson would love to unify belts against Top Rank stablemate and fellow titleholder Oscar Valdez in his first fight of 2022, but Top Rank chairman Bob Arum has a different idea and is not in a hurry to make that fight immediately.
COMBAT SPORTS・2 DAYS AGO
USA TODAY Sports Media Group

Bob Arum at 90: Hall of Fame promoter by the numbers

Bob Arum turned 90 today. And the Hall of Fame promoter is still going strong. The Vasiliy Lomachenko-Richard Commey card on Saturday in New York (ESPN and ESPN+) will be the 2,120th of the Top Rank chairman’s career, according to a Top Rank news release. That’s an average of almost 40 cards per year since his first promotion on March 29, 1966 in Toronto, where Muhammad Ali successfully defended his heavyweight title against George Chuvalo.
NEW YORK CITY, NY・3 HOURS AGO