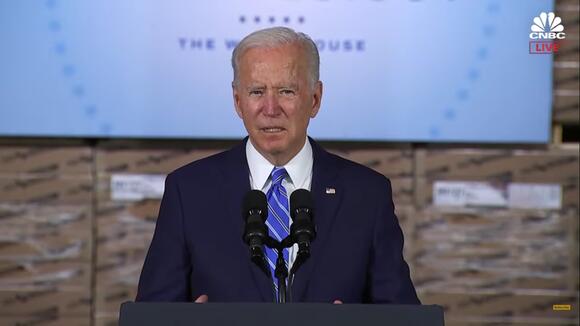 President Joe Biden personally called a Pennsylvania hospital on Wednesday to know “what the situation was” when a friend’s wife struggled to be seen by a physician at the facility overwhelmed with Covid -19 patients.

“Last night … I was on the telephone with a person at an emergency hospital ward in Pennsylvania because a good friend had called and he had rushed his significant other to the emergency room because this one was having trouble breathing, had a high fever and could not really catch a breath,” Mr Biden said in his address about vaccines in Illinois.

“And they got her into the hospital, But the waiting room was so crowded . Things were so backed up, they couldn’t even get her to be seen initially. So, because I knew this person I called. I called the desk, the receiving nurse and asked what the situation was,” he added.

The US president was speaking about a new federal rule which requires companies with more than 100 or more employees to require vaccination or regular testing when he highlighted the situation at a hospital.

He added that he “wasn’t complaining” because he understands that “they’re getting the living hell kicked out of them, by the way — doctors and nurses. Some of them are just, they’re running dry.”

It is unclear if the president’s phone call to the hospital helped his friend’s wife in getting the medical attention she needed.

“To make a long story short, it took a while because all of the — not all, the vast majority of the emergency rooms and the docs were occupied taking care of Covid patients,” he said.

Mr Biden then went on to make the case for Covid vaccine mandates and asked companies to ensure that their employees are vaccinated.

"I’m calling more employers to act," Mr Biden said. "My message is require your employees to get vaccinated. With vaccinations we’re going to beat this pandemic finally.”

The Labor Department is yet to release the details of the emergency rule which are expected to be announced in a few weeks.

The US now appears to be experiencing a slowdown in Covid-19 deaths after two months of constant surge, according to data from the Centres for Disease Control and Prevention.

There has been a 12 per cent decline in seven day moving average in Covid deaths over the last two weeks since mid September.

Nevertheless, the surge in cases coupled with low vaccine rates in some parts of the country during summer has overwhelmed the hospitals, forcing the government to reinstate the mask mandates.

Mr Biden’s approval rating has slipped to 38 per cent, according to a Quinnipiac University poll released on Wednesday, particularly over handling of Covid-19 and economy. His ratings are down from 42 per cent three weeks ago following a high of 50 per cent in February.

Something about this story doesn't ring true..you can't believe anything coming out of his mouth..but one important factor to consider..He likes the power associated with the position..

Good old Biden preferential treatment courtesy of the Biden family! Yes I feel sorry for the person who was so sick! But do you think any of us would get a personal call from Joe Biden that would usher us into the hospital over all others waiting? The reason the hospitals are overwhelmed is cause of his mandates causing everyone to just quit! Now staff can’t keep up! between that and all the migrants crossing into the United States this certainly can’t help America! I don’t see how millions of migrants coming from all over the world pouring into our country un checked for any diseases could be a good thing! This is why Americans are displaying their clear case for displeasure against the old American Joe Biden sippey cup!

Yet again another reason to impeach. Another abuse of power. Where are you leftists? Is it because he doesn't tweet harsh words 🤔?

White House press secretary Jen Psaki refused to discuss previous remarks from President Biden about former President Trump which claimed "anyone who is responsible" for so many COVID-19 deaths should "not remain" in the White House. During a campaign debate last fall, Biden took a jab at then-President Trump for...
PRESIDENTIAL ELECTION・2 DAYS AGO
Business Insider

Asked about a shocking new claim that Donald Trump tested positive for Covid-19 before a presidential debate in 2020, Joe Biden had a blunt response.“I don’t think about the former president,” he told a press conference on Wednesday – before calmly turning and walking away.Mr Biden was being asked about a story from an upcoming book by Mark Meadows, Donald Trump’s last presidential chief of staff. In The Chief’s Chief, Mr Meadows recounts that the ex-president – known as “the former guy” in the Biden White House – was departing for a Pennsylvania rally three days before the debate...
PRESIDENTIAL ELECTION・1 DAY AGO
The Independent

Just 34 percent of voters approve of the president's handling of immigration but this is an increase on October.
PRESIDENTIAL ELECTION・6 DAYS AGO
FingerLakes1.com

Americans were calling on President Joe Biden for another stimulus check following Thanksgiving and the cost of dinner thanks to inflation. Now, they’re calling on him to send another check as the concern over the newest variant, Omicron, spreads across the nation. Omicron has not been detected in the United...
PUBLIC HEALTH・3 DAYS AGO
The Independent

Americans with private medical insurance will be able to have the costs of at-home Covid-19 testing kits reimbursed by their insurers as part of a series of actions from Joe Biden’s administration to bolster the US against the coronavirus pandemic as the public health crisis enters a third year.The new policy will not cover upfront costs for such rapid at-home kits, which can range from $10 to $25. Instead, the roughly 150 million Americans with private insurance plans must file claims with their insurance providers to be reimbursed for the cost of at-home testing. Private insurers already cover in-office...
1 DAY AGO
Shore News Network

WASHINGTON, DC – After nearly one full year of being unable to fulfill his promise to America to defeat COVID-19, President Joe Biden today said he is changing his plan and will have to now ‘beat it back’ before the virus can be defeated. During Biden’s first year, the administration...
PUBLIC HEALTH・5 HOURS AGO

By late September 2020, the coronavirus was no longer a mystery. We knew what it did, we knew how it spread, we knew how it could be detected, and we knew better ways to treat the disease it caused. Americans had stopped binge-buying Purell and moved on to comparing masks. Vaccines were still a few months out, as were at-home testing kits, but those who chose to protect themselves against the virus had a useful sense of how to do so.
POTUS・2 DAYS AGO
CNN

(CNN) — Then-President Donald Trump tested positive for Covid-19 three days ahead of his first 2020 presidential debate with Joe Biden -- though he also had a negative result in that same timeframe, according to excerpts from a forthcoming book from the former Republican president's chief of staff reported by The Guardian.
PRESIDENTIAL ELECTION・2 DAYS AGO
6abc Action News

"The quicker we get vaccinated, the more we use strategies like masks and testing to reduce our risk, the quicker we'll come to the end of this pandemic," said Surgeon General Vivek Murthy.
PUBLIC HEALTH・17 HOURS AGO
The Guardian

Covid: Biden says to beat Omicron variant ‘we have to shut it down worldwide’ – live

Bill to fund government through mid-February wins Senate report while US adds 210,000 jobs in November
PUBLIC HEALTH・4 MINUTES AGO

Former President Donald Trump tore into President Joe Biden in a wide-ranging interview Thursday, suggesting that the administration is "knowingly" destroying the country and is distrusted by the American people. During an appearance on "Fox & Friends," Trump shot back at the president over his 2020 comments, where he suggested...
PRESIDENTIAL ELECTION・1 DAY AGO
US News and World Report

St. Thomas More Hospital has seen a steady number of COVID patients since the pandemic began more than a year and a half ago, but that volume steadily has been increasing during the past six to eight weeks. Dr. Kendall Rockler, the Chief Medical Officer for St. Thomas More Hospital,...
HEALTH SERVICES・13 DAYS AGO
NHPR

COVID cases continue to rise in New Hampshire, and it’s putting pressure on the state’s hospital system. Over 300 people are currently hospitalized with the virus in the Granite State, the highest number since last January. Get NHPR's reporting about politics, the pandemic, and other top stories in your inbox...
DOVER, NH・14 DAYS AGO

President Joe Biden said Thursday his plan to fight Covid during the winter doesn't include shutdowns or lockdowns. He also said the plan does not expand the current federal vaccine mandates. The president said his plan focuses on more booster shots and more testing. "We are in a better position...
PUBLIC HEALTH・1 DAY AGO
CBS News

The federal government will send 44 military medical staffers to Michigan to help beleaguered hospitals treat COVID-19 patients amid a fourth surge that is the worst in the country, state health officials said Wednesday. It also will open beds at the Veterans Affairs hospital in Detroit for transfers. Governor Gretchen...
MICHIGAN STATE・8 DAYS AGO
POLITICO

The president’s success in office will be tied to how he handles the pandemic. The emergence of Omicron makes that clear again.
PRESIDENTIAL ELECTION・1 DAY AGO