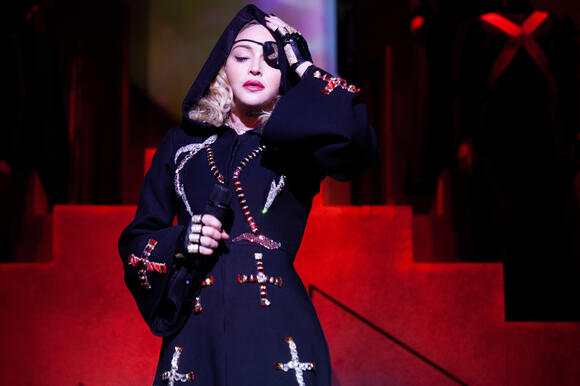 Madonna is celebrating her upcoming documentary with a new fashion collection.

The music icon is releasing the Madame X merchandise collection — the same name as her recent studio album and her new documentary that releases today on Paramount+.

The fashion collection includes T-shirts, hoodies and shorts featuring images of Madonna as “Madame X,” the singer’s secret agent alter ego that she embodied for the album and subsequent tour. The styles include images of Madonna wearing a tiara and an eyepatch embellished with a studded “X.”

The “Madame X” documentary is a concert film made during Madonna’s recent tour when she was in Lisbon, Portugal for a six-night concert series. The documentary includes many of her onstage performances, as well as performances from her daughter, Lourdes Leon, and an appearance from the all-female Orquestra Batukadeiras, a Portuguese batuque group.

“Sharing my vision with global audiences has been profoundly meaningful to me,” Madonna said in a statement about the film. “The opportunity to bring its message and the incandescent artistry of all involved to an even wider audience comes at a time when music is so deeply needed to remind us of the sacred bond of our shared humanity.”

Madonna’s Madame X merchandise collection ranges in price from $30 to $75 and is available on the singer’s website. More styles are expected to be added to the collection soon. The “Madame X” documentary is also available to stream now on Paramount+.

Lindsay Lohan Is Launching a Podcast

Click here to read the full article. Lady Gaga is continuing her hot streak — literally — of fashion-forward red carpet style for the “House of Gucci” press tour. The singer-actress led the way at the Milan premiere for the upcoming murder drama in a custom red gown by Versace that featured a corset top with lace-up detailing and a form-fitting skirt with a high thigh slit on the left. She wore matching red platform pumps, jewelry by Tiffany & Co. and styled her hair in a half-updo. The star’s makeup was a bold, smokey eye and finished with a nude...
DESIGNERS & COLLECTIONS・23 DAYS AGO
WWD

As Fashion and TV Get Closer, Coco de Mer Partners With ‘Killing Eve’

Click here to read the full article. LONDON — Are TV series stars the new influencers? As the power of the picture-perfect Instagram influencer is being questioned, fictional characters from hit TV and Netflix series — ranging from “Bridgerton” to “Gossip Girl” and “Squid Game” — are reemerging as the ultimate trend setters.More from WWDOnes To Watch: 16Arlington, Deborah Lyons, Laviate Focus on The Customer FirstAquazzura, Net-A-Porter Spotlight Five Designers Modernizing Fine JewelryAlaïa Launches on Net-a-porter According to recent data by Lyst, the ’80s styling choices of the “Sex Education” cast or creative personalities like poet Kai-Isaiah-Jamal are starting to drive trends and...
DESIGNERS & COLLECTIONS・4 DAYS AGO
WWD

Click here to read the full article. Here comes Lisa. The rapper, born Lalisa Manobal, made her runway debut walking in Celine’s summer 2022 show held in Nice, France. The event was available via livestream on the brand’s official website, with additional coverage on Instagram, Twitter and YouTube.More from WWDPhotos of the Best Fashion Moments from the 46th Season of 'SNL'The Virtual Front Row at Saint Laurent Fall 2021Celine First Perfume Store in Paris During the show, Lisa walked on an observatory overlooking the city and the ocean in a grey hoodie under a green varsity jacket emblazoned with the words “Celine...
BEAUTY & FASHION・3 DAYS AGO
Hello Magazine

Demi Moore has had years of experience setting fashion statements, and she just made another major one at a star-studded red carpet. The actress attended the 2021 Fashion Awards at the Royal Albert Hall in the most extravagant of gowns that you won't forget anytime soon. The black and white...
BEAUTY & FASHION・7 DAYS AGO

The busty vixen is known for her over-the-top fashion, which has influenced an entire generation of rappers
BEAUTY & FASHION・15 HOURS AGO
People

Dua Lipa and Madonna Pose Together at Fashion Awards Afterparty: 'Martinis on Deck'

Dua Lipa was partying with the Queen of Pop in London this week!. The 26-year-old singer posted a duo of photos alongside Madonna and Turkish photographer Mert Alas to her Instagram on Tuesday from the British Fashion Council's 2021 Fashion Awards afterparty the night before. Lipa rocked a strapless black...
BEAUTY & FASHION・6 DAYS AGO
shefinds

Zendaya Wore The Most Risqué Backless Gown On The Red Carpet In Paris—OMG!

Zendaya once again proved why she was the very deserving recipient of this year’s CFDA Fashion Icon Award when she walked the red carpet for the Ballon D’Or ceremony at Theatre du Chatelet in Paris on Monday, November 29th. Just look at her!. The 25-year-old Dune actress made history last...
PARIS, NY・2 DAYS AGO
Page Six

Late designer Virgil Abloh’s Spring-Summer 2022 Collection will go on as planned in Miami on Tuesday. The announcement was made by Louis Vuitton and Abloh’s family on Monday. The luxury brand said in a statement on Instagram of the collection, called “Virgil Was Here,” “in loving memory of Virgil Abloh,...
DESIGNERS & COLLECTIONS・7 DAYS AGO

Zendaya Gives a Nod to ‘Spider-Man’ at London Premiere

Click here to read the full article. Zendaya continued her habit of giving a nod to her roles and films through her fashion at the London premiere of “Spider-Man: No Way Home.” The actress attended the photo call for the film’s premiere Sunday night wearing a men’s wear-inspired look from Alexander McQueen’s spring 2022 ready-to-wear collection. The look consisted of an oversize gray blazer jacket embellished with a crystal design that resembled a spider web.More from WWDThe Standout Fashion Moments from the 2021 Gotham Awards2021 American Music Awards Red Carpet: PhotosPhotos from 'Dancing With the Stars' Season 30 She completed the look...
MOVIES・15 HOURS AGO
iHeartRadio

She also hints that she's been experimenting with metal.
CELEBRITIES・7 HOURS AGO
WWD

Click here to read the full article. Despite minimal prior design experience and just a few years of fashion school under his belt, George Trochopoulos has become a go-to designer for some of today’s biggest stars. The 20-year-old London-based designer didn’t initially intend on a career as a fashion designer, having first thought about law or software engineering. It was when he was looking for a safe space and a community that he ended up pursuing fashion design.More from WWDThe Standout Fashion Moments from the 2021 Gotham Awards2021 American Music Awards Red Carpet: PhotosPhotos from 'Dancing With the Stars' Season 30 “I...
DESIGNERS & COLLECTIONS・3 DAYS AGO
WWD

Click here to read the full article. John Legend rocked the house at Nordstrom and Sperry’s “A Legendary Holiday” event on Friday at the Nordstrom Midtown Manhattan location. The singer and songwriter commemorated the launch of his shoe collection with Sperry at the store, performing a mix of his hit songs for hundreds of guests including “Ordinary People” from the album “Get Lifted”; “Save Room” from his second album “Once Again,” and classic Christmas tunes like “Have Yourself a Merry Little Christmas,” featured on his first Christmas album “A Legendary Christmas.”More from WWDChloé Pre-Fall 2022MM6 Maison Margiela Pre-Fall 2022All About Hue The...
BEAUTY & FASHION・1 DAY AGO

This Artist Might Cut Up Gaultier Archive Pieces at 3537

Click here to read the full article. BODY OF WORK: “Anything could happen, I could take a pair of scissors and slice away,” joked artist and couturier Michaela Stark ahead of her “Stark Naked” exhibition at Dover Street Market’s 3537 cultural center in Paris until Dec. 19. But the point of her two-week showcase isn’t seeing the Paris-based Australian squeeze herself into sample-sized corsets in a replica of her bedroom, or even slice into unfinished toiles on loan from the archives of Jean Paul Gaultier at a performance during her Dec. 7 vernissage.More from WWDFront row at Jean Paul Gaultier Couture...
DESIGN・7 HOURS AGO
WWD

Click here to read the full article. Halston is embarking on a category expansion with a new collaboration. The heritage fashion brand has teamed with Aurate on a fine jewelry collection that fuses both brands’ ethos for the holidays. The 12-piece collection includes earrings, necklaces and rings co-designed by both brands that are made to reflect Halston’s well-known glitz and glamour of the Studio 54 days.More from WWDPhotos of the Brock Collection x H&M Fashion CollaborationEverything to Know About Fashion Designer HalstonPhotos of Target's 2021 Designer Dress Collection “It’s about going out, showing the glitzy version of yourself and this party mode,...
DESIGNERS & COLLECTIONS・2 HOURS AGO
Hello Magazine

Christina Aguilera has been making the most of her return to music and made her first major awards show appearance in supreme style. The singer appeared at the recent Latin Grammys in a dramatic Vivienne Westwood gown that showed off her curves brilliantly. She had her flaming red hair tied...
MUSIC・12 DAYS AGO
Highsnobiety

If Batman wore Dior, the Holiday 2021 collection would be an instant sellout – realistically, it probably still will be. Fall/Winter, or what should be called the buffers on either side of the Holiday season, is the greatest period of dress in the calendar. Layers are heavy; knits are cozy, shoes rugged, puffer jackets are king, and it's tracksuit day, every day. Best of all, all black fits don't leave you sweating buckets.
DESIGNERS & COLLECTIONS・5 DAYS AGO
Hypebae

Beyoncé is giving off prep school-meets-country club vibes in what seems to be her next IVY PARK x adidas drop called “HALLS OF IVY.”. The singer took to social media to tease the upcoming collection along with photos of herself modeling a green bodysuit as well as a plaid blazer. “Welcome to the Halls of Ivy,” reads the posts on Instagram and Twitter followed by a link and hashtags on ways to stay informed.
DESIGNERS & COLLECTIONS・12 DAYS AGO
crfashionbook.com

With the cast of up-front and behind-the-scenes personalities being honored or presenting at Variety‘s Hitmakers, presented by Peacock & Girls5eva. it was hard to pick out highlights. But if we could get Jack Harlow talking about the last award he won before being named Variety’s Hitmaker of Tomorrow (spoiler: he was in the second grade!), or decade award winner Lana Del Rey telling us who is tops on her bucket list of future collaborators (spoiler: only one of them is in his 80s!), those have to go to the top. Here are five memorable takeaways from the weekend’s star-studded event pulled...
CELEBRITIES・5 HOURS AGO