Only On 2: Olympic gold medalist, Lowcountry native reflects on Tokyo 2020 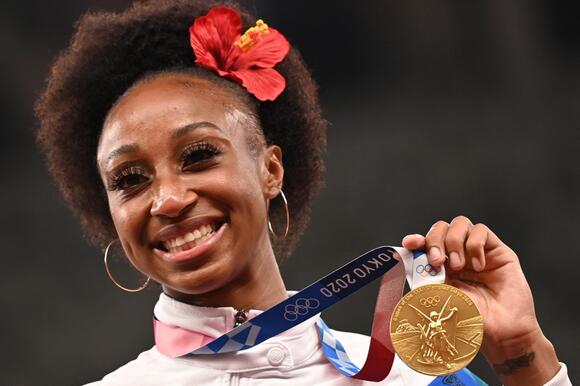 CHARLESTON, S.C. (WCBD) – An Olympic gold medalist is reflecting on her long journey from the Lowcountry to the podium in Tokyo. Jasmine Camacho-Quinn says she was never sure she would ever compete again for the Olympics after a heart-breaking loss in Rio de Janeiro in 2016.

Fort Dorchester High School graduate Camacho-Quinn brought home a gold medal from this year’s Tokyo Olympics. She says she is now reflecting back on her journey on getting to that point after she set Olympic world records.

“You can’t really explain that, only one person can get a gold medal. There was actually two this year and one event, but that experience was amazing,” Jasmine says.

She competed in the Women’s 100-meter hurdles as she represented her mother’s home country of Puerto Rico, completing her record run in 12.26 seconds.

“It’s really a proud thing. I wasn’t going out there without a fight and it means a lot to represent half of me,” she says.

Jasmine says there were points where she wanted to give up. Hitting a hard point after clipping a hurdle in the 2016 summer Olympics in Rio, a setback that made her question whether she would ever train again -to make it back to the games.

“Mentally I was out of it. I was trying to deal with what happened, but I had to come back to school right after and start back up. My body was tired and mentally I was tired too,” she says.

She says she had a change of hear when setting a personal record for herself in her junior year of college. She let go of her fear that led her want to come back even stronger, to compete again.

“You start doubting yourself and you don’t want to do it anymore. I went through that feeling again, but I picked myself up and kept it pushing,” Jasmine says.

Looking back on her journey, Jasmine says she now wants to send a message to young girls and athletes that they can work hard to achieve their goals.

“There’s always going to be people around that’s going to try to bring you down and try to distract you. You just have to really stay focused on what you want to do and I think anything is possible,” she says.

Jasmine says she is training and looking forward to the World Athletics Championships in Oregon in July 2022. She plans to compete and hopefully break another record.

For the latest news, weather, sports, and streaming video, head to WCBD News 2.

USA Softball Hall of Fame honoree Leah O'Brien-Amico will speak to interested players, parents and others at Weatherford College's Stuart Field on Sunday, Nov. 28. O'Brien-Amico won three national championships as an All-American with the University of Arizona and earned three Olympic gold medals with Team USA (Atlanta 1996, Sydney 2000 and Athens 2004). She is a motivational speaker and a frequent contributor on ESPN.
WEATHERFORD, TX・12 DAYS AGO
bjpenndotcom

Former UFC light heavyweight champion Jon Jones posted a new video of him grappling with Olympic wrestling bronze medalist J’Den Cox. Jones was recently booted out of his longtime gym, Team Jackson-Wink in Albuquerque, New Mexico, after his coach John Winkeljohn kicked him out of the gym after a domestic battery incident with his partner in Las Vegas back in September. Initially, it was thought that Jones was going to make some serious changes in his life and then get back into the gym when both he and his former team felt like he was ready to come into the doors again.
UFC・9 DAYS AGO
San Diego Union-Tribune

It was a night filled with surprises, as Evansville native and Paralympic Gold Medalist, Mikaela Jenkins was given a warm welcome Tuesday night by friends, family and city leaders, with an official tour of the new Deaconess Aquatic Center. The tour was only the beginning. "I knew that Mayor Winnecke...
EVANSVILLE, IN・13 DAYS AGO
nbc15.com

FITCHBURG, Wis. (WMTV) - Olympic marathon bronze medalist and Wisconsin native Molly Seidel was among the Berbee Derby 5k and 10k runners in Thursday morning in Fitchburg. Not only did she run the 10k, but Seidel wore a turkey costume while doing it, despite a small tail malfunction. Seidel is...
FITCHBURG, WI・11 DAYS AGO
go955.com

(Reuters) – Women were the target of 87% of the social media abuse that a sample of athletes faced during the 2020 Tokyo Olympics, according to a World Athletics study published on Thursday. The research, carried out in collaboration with data science company Signify Group, found that the abuse included...
SPORTS・12 DAYS AGO
tucsonpost.com

A 24-year-old canoeist who won medals on the world stage and was honored in Ukraine has died just two weeks after being diagnosed with Covid-19. The Canoe Federation of Ukraine announced the death of ten-time world and European medalist Bizu Borislav shortly after he tested positive for the coronavirus. The...
PUBLIC HEALTH・6 DAYS AGO

Oshae Jones, who won a bronze medal at the Tokyo Olympics, has signed a deal with Split-T Management as she looks to turn pro. The 23-year-old Toledo native picked up two wins in Tokyo before losing to China’s Gu Hong in the semifinal round, with Gu going on to lose to Turkey’s Busenaz Surmeneli in the final.
COMBAT SPORTS・5 DAYS AGO
triathlete.com

Become a member to unlock this story and receive other great perks. *Outside memberships are billed annually. Print subscriptions available to U.S. residents only. More Details. I knew she was cutting into the lead, but was she going to run out of time?. Lauren came past… and then I saw...
SPORTS・6 DAYS AGO
Daily Northwestern

Ask anyone in the swimming world about Northwestern junior and Olympic medalist Federico Burdisso, and they’ll mention his coolness under pressure. Ask his older brother and Wildcat teammate, junior Alessandro Burdisso. “A lot of athletes have a hard time because of the pressure, COVID rules or that no one could...
SWIMMING & SURFING・6 DAYS AGO
momtastic.com

KENOSHA, Wis. — Many athletes competed in the 2020 Tokyo Olympics and among them was Wisconsin-native Molly Seidel. Seidel returned to the scene of one of her greatest high school victories at the Eastbay Cross Country Championships Midwest Regional at the University of Wisconsin-Parkside. “To come down for the race...
SPORTS・9 DAYS AGO
CNBC

Tokyo 2020 was an Olympic Games like no other, though likely not in the way its organizers had originally planned. With the Covid-19 pandemic underway and thousands of athletes' Olympic dreams hanging in the balance, the show had to go on — and it did, eventually. In late March 2020,...
SPORTS・4 DAYS AGO
Morning Read on Sports Illustrated

Xander Schauffele hasn’t won a major championship in his career. He’s come close, finishing second in both a Masters and a British Open. But as he competes in the Hero World Challenge this weekend, Schauffele has a trophy the biggest names in the sport can’t match, including Tiger Woods, Jack Nicklaus, Ben Hogan, Arnold Palmer, etc. He has Olympic gold.
GOLF・4 DAYS AGO
The Post and Courier

Law enforcement agencies across the Lowcountry held separate events to raise money for a good cause. The result of the community-wide fundraising was a $54,000 check presented on Nov. 16 to the South Carolina Law Enforcement Torch Run for Special Olympics. During separate Cops on the Coop events at tri-county...
MOUNT PLEASANT, SC・7 DAYS AGO
San Diego Union-Tribune

Sofia Goggia has won a World Cup downhill by a wide margin for the second consecutive day to extend her streak in the discipline to six races in a row
SAN DIEGO, CA・2 DAYS AGO
KGET

When people think of Brenna Huckaby, they see the Paralympic snowboarder who won two gold medals in 2018. What they don't always see is a full-time mom. In the latest episode of Team Whistle's "Double Duty" series, Huckaby shows us what her life is like playing the dual role of mom and snowboarder.
COLLEGE SPORTS・10 DAYS AGO
teamusa.org