fourstateshomepage.com is a news site powered by KSNF and KODE News in Joplin, MO 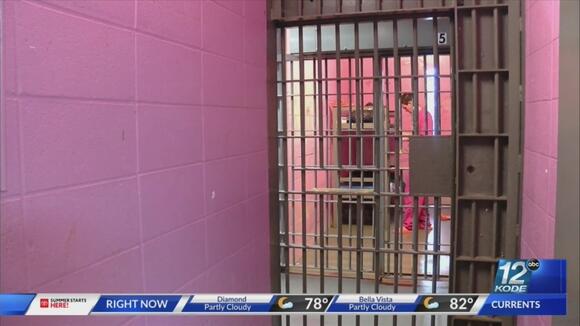 LAWRENCE COUNTY, Mo. — Residents of Lawrence County may soon be paying a little more in taxes.

There is a purpose to what’s being proposed.

That’s right, and voters have less than a month to decide. On the ballot on November 2nd — the question of whether to impose a sales tax of three-eighths of one percent.

The current jail was built back in 1986. Outdated and even unsafe for deputies, the county is in need of an upgrade. So come November, if passed, money coming from the public safety sales tax of three-eighths of one percent will go towards building a new jail.

“Whether it’s a jail, whether it’s nice roads, weather it’s new schools, unfortunately people have to pay for those services, or they don’t have them. The good side of the sales tax is everybody pays for it,” said Brad Delay – Lawrence County Sheriff.

While not everyone in the county may be on board, some people like Pam Dudley believe it’s time for a change.

“We’re outdated, it’s been absolute years since they’ve been able to do any upgrades there, and they’re landlocked, so they can’t grow or expand in the spot they sit in,” said Pam Dudley – Lawrence County Resident.

With an updated jail, the county will be able to keep more inmates in their own facility. Something they’ve struggled to do in the past. In fact, they’ve had to use tax money to send some inmates to other locations.

“We send probably half of our inmates to other counties throughout the state. So, not only obviously safety is the number one issue but this year alone, we’re probably going to total close to half a million dollars that we are paying other counties to hold our prisoners,” said Delay.

Doing this also brings concern to people like Dudley.

“Transporting all the inmates to other facilities leads to an opportunity for someone to escape, and I think that it would be a better scenario if they just were here,” said Dudley.

Also — one-eighth of the one percent sales tax would sunset and expire when the final payment occurs. In the long run, sheriff delay says the goal for this sales tax is to ultimately save people money.

For the latest news, weather, sports, and streaming video, head to KSNF/KODE - FourStatesHomepage.com.

One thing Biden will not do to fight the Omicron variant

(CNN) — There was a telling moment during President Joe Biden's remarks on the new Omicron coronavirus variant at the White House Monday. He's all in on doing everything he can to get Americans vaccinated and politely asking them to mask up, but he's not likely to go the direction of some European leaders and push lockdowns any time soon.
PUBLIC HEALTH・3 HOURS AGO
ABC News

Opening statements began Monday in the sex-trafficking trial of Ghislaine Maxwell, the British socialite who is charged with recruiting women and girls for her longtime associate and convicted sex offender Jeffrey Epstein. Prosecutors portrayed Maxwell as a sexual predator who enticed teenage girls, first by befriending them, then serving them...
PUBLIC SAFETY・2 HOURS AGO
CBS News

Omicron: What we know — and don't know — about the new COVID-19 variant

The Omicron variant of SARS-CoV-2 is the latest strain of the coronavirus to be designated a "variant of concern" by the World Health Organization: more and more countries are reporting cases, and it has an unusual combination of mutations that may enable it to spread faster. Scientists are also trying to determine whether the current vaccines are effective against it.
PUBLIC HEALTH・3 HOURS AGO

Dorsey announced the news in a tweet Monday.
BUSINESS・8 HOURS AGO
The Associated Press

Iran returns to negotiations, with a nuclear crisis still looming large for Biden

Iran returned to negotiations over its nuclear program on Monday -- meeting for the first time in over five months.
MIDDLE EAST・4 HOURS AGO
CBS News

Virgil Abloh, the artistic director of Louis Vuitton and founder of Off-White, died Sunday following a private fight with cancer, both companies announced Sunday. Abloh was 41. "We are all shocked after this terrible news. Virgil was not only a genius designer, a visionary, he was also a man with...
CELEBRITIES・15 HOURS AGO

#Use Tax#Weather
The Associated Press

Boebert in call refuses to apologize for anti-Muslim remarks

WASHINGTON (AP) — Days after firebrand conservative Rep. Lauren Boebert of Colorado was harshly criticized for making anti-Muslim comments about Rep. Ilhan Omar, a Minnesota Democrat whom she likened to a bomb-carrying terrorist, the two spoke by phone Monday. The conversation, which Boebert sought after issuing a tepid statement last...
CONGRESS & COURTS・3 HOURS AGO
ABC News

Amazon workers in Alabama get a do-over in union election

A new union election for Amazon workers in Bessemer, Alabama, will be held based on objections to the first vote that took place in April
ALABAMA STATE・2 HOURS AGO

fourstateshomepage.com is a news site powered by KSNF and KODE News in Joplin, MO