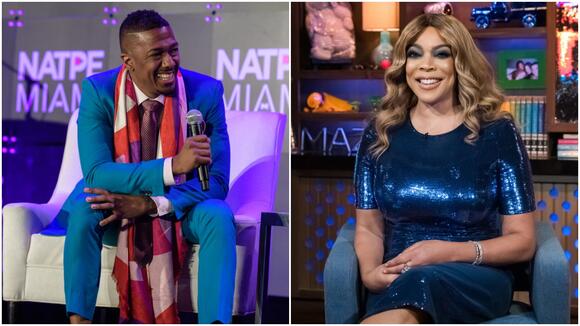 The premiere date of The Wendy Williams Show has been pushed back for the third time amid talks that she might not want to return to her purple chair. Now a source has come forwards and said that network execs are already putting together a backup plan just in case Williams doesn’t return .

“The executives have been talking,” the anonymous source said. “They are keeping a close eye on [Williams’] recovery and hoping for the best. But they have pushed back [her] show premiere several times so they are already thinking of a backup plan. It would not be a far stretch for Nick to take her time slot… Debmar-Mercury [which produces both shows] is really pushing to make Nick Cannon’s show a huge success. He already has a major platform, and a huge fanbase, so it is an easy win. So, if Wendy’s show ends up being a no-go, their backup plan is already set.”

The premiere date was pushed back to Oct. 18 due to Williams still battling health issues.

Williams has been having a tough time these past few months. After dealing with undisclosed health issues, she was diagnosed with a breakthrough case of COVID-19. She then voluntarily checked into Beth Israel Hospital for psychiatric treatment. Things looked hopeful as the previous Oct. 4 return date was approaching but it was pushed back again.

There are also rumors that Williams may not be interested in returning to her long-standing talk show for its 13th season. Another source told The Sun that Williams “is over it.”

“The show is set to air through the 2021-22 season,” they said. “There is no decision beyond that, but she could very well walk away.”

Wendy Williams has had fans worried for months after it was revealed she would not be immediately returning to "The Wendy Williams Show" in the wake of its summer hiatus. Wendy was originally scheduled to reclaim her purple chair in September, though her return was pushed back after it was confirmed via a post on "The Wendy Williams Show"'s Instagram that Wendy had been experiencing health issues as well as a "breakthrough case of COVID-19." The show's Season 13 premiere was then scheduled for October 4.
CELEBRITIES・14 DAYS AGO
BIN: Black Information Network

LISTEN LIVE. LIKE US ON FACEBOOK. FOLLOW US ON TWITTER. Word has it that the queen of daytime talk shows reign may have officially come to an end. Wendy Williams is a media and tv personality who got her start at DJing and hosting at a radio station in New York. She became notable for her 2006 show The Wendy Williams Experience which showed on VH1 and followed the day of her radio show. She however, is most known for her talk show The Wendy Williams Show which has been on air since 2008.
CELEBRITIES・12 DAYS AGO
iHeartRadio

Nick Cannon Admits To Having A Favorite Baby Mama, His Answer May Shock You

Wendy Williams gave a quick update on her health while strolling barefoot out of a Miami wellness center in a robe as rumors continue to swirl that producers are replacing her on her namesake talk show. Article continues below advertisement. In a video obtained by The Shade Room, the 57-year-old...
CELEBRITIES・6 DAYS AGO
The US Sun

WENDY Williams’ brother Tommy said the daytime host is still mourning their mother’s death as sources tell The Sun she will never return to her show amid health issues. In an exclusive interview with The Sun, Tommy said that Wendy’s divorce from Kevin Hunter compacted her grief over her mother’s passing a year ago.
CELEBRITIES・8 DAYS AGO
99.3 / 105.7 KISS FM

Nick Cannon Announces The Death Of His 7th Child Zen

According to TMZ, Nick Cannon made an emotional announcement on his show, “The Nick Cannon Show”, Tuesday that his youngest son Zen Cannon passed away. Zen was only 5 months old, his health seemed to spiral around Thanksgiving. Apparently, he developed a tumor shortly after being born. Nick explained how they thought it was a […]
CELEBRITIES・1 DAY AGO
The US Sun

NICK Cannon spent the last few moments with his son Zen enjoying the beautiful California beaches before the five-month-old lost his battle to brain cancer. The Wild 'N Out star announced the tragic passing of his youngest son in a tearful moment on the Nick Cannon Show on Tuesday. Nick,...
NEW YORK CITY, NY・1 DAY AGO

Mariah Carey had quite the shady response about her ex Nick Cannon when an interviewer brought up the five children that Nick has with three other women. Nobody is off limits to Mariah Carey‘s shade — not even her ex-husband, Nick Cannon. Mariah, 52, had her latest epic shade moment during an interview with Entertainment Tonight about her upcoming Christmas plans, when host Kevin Frazier broached the subject of Nick’s five children that he shares with three different women, in addition to his and Mariah’s 10-year-old twins, Monroe and Moroccan. “So let me ask you this: will any of their stepbrothers or stepsisters enjoy Christmas your way?” Kevin said to Mariah. “Because it’s a special way.” But Mariah didn’t give an exact answer, and instead harped on the fact that Kevin used the term “step” when referring to Monroe and Moroccan’s relations to Nick’s other kids.
CELEBRITIES・14 DAYS AGO
92.7 The Block

Condolences: Nick Cannon Announces That His Youngest Son Zen Cannon Has Passed Away

"I'm here to show that I can fight through this. I'm feeling it. I'm vulnerable. I'm open."
CELEBRITIES・1 DAY AGO
Ok Magazine

Nick Cannon’s baby mama, Alyssa Scott, took to social media to share photos of her son Zen following news of his tragic death. Scott shared multiple photos of the toddler via her Instagram Story on Tuesday, December 7. In the gut wrenching clips, the infant is seen smiling at the proud mama as she talks to him.
CELEBRITIES・1 DAY AGO
Radar Online.com

Wendy Williams’ ex-husband Kevin Hunter was seen out and about in New York without a care in the world. Over the weekend, Kevin was seen partying it up with a group of male friends after taking a trip to the Big Apple. Article continues below advertisement. Wendy’s ex, who lives...
CELEBRITIES・9 DAYS AGO

Nick Cannon has hinted he wants more children. The “Wild ‘N Out” star – who has 10-year-old Moroccan and Monroe with ex-wife Mariah Carey; Golden, 4, and Powerful Queen, 10 months, with Brittany Bell; Zion and Zillion, 4 months, with Abby De La Rosa; and Zen, also 4 months, with Alyssa Scott — recently pledged to stay celibate for some time, but now says he’s open to the idea of fathering more kids.
FAMILY RELATIONSHIPS・27 DAYS AGO
kpopstarz.com

The K-pop girl group aespa will perform on "The Nick Cannon Show" hosted by famous American MC Nick Cannon. They are the first K-pop group to appear in the American show. Keep reading for more details. Aespa Set To Appear on 'The Nick Cannon Show,' First K-Pop Group to Perform.
CELEBRITIES・4 DAYS AGO
fox2detroit.com

Television talk show host and actor Nick Cannon announced he lost his 5-month-old son, Zen, to brain cancer. "Over the weekend, I lost my youngest son to a condition called hydrocephalus," he said on "The Nick Cannon Show" while holding back tears. "It’s tough." According to the National Institutes...
DISEASES & TREATMENTS・1 DAY AGO
The Citizens Voice

Sherri Shepherd appears to be the guest host with the most when it comes to “The Wendy Williams Show.”. The Emmy Award-winning funnywoman has been tapped to return to the nationally syndicated talk show this month amid Williams’ ongoing health issues. Noting her previous stints earned the chatfest its highest...
CELEBRITIES・3 DAYS AGO
GMA

Wendy Williams is already making plans for her next profession after her talk show ends, at least according to his brother, Tommy Williams. This comes after Radar exclusively reported the producers of The Wendy Williams Show are currently looking for a full-time replacement as her health condition continues to deteriorate.
CELEBRITIES・13 DAYS AGO
Ok Magazine

Nick Cannon is a proud father of seven and has been open about talking about his children and all of their mothers. According to PEOPLE, in a clip from Wednesday’s episode of his daytime talk show Nick Cannon, the 41-year-old invited Bravo’s Andy Cohen to play a game of Plead the Fifth. For the game, the pair have to take turns answering hot topic questions.
FAMILY RELATIONSHIPS・27 DAYS AGO