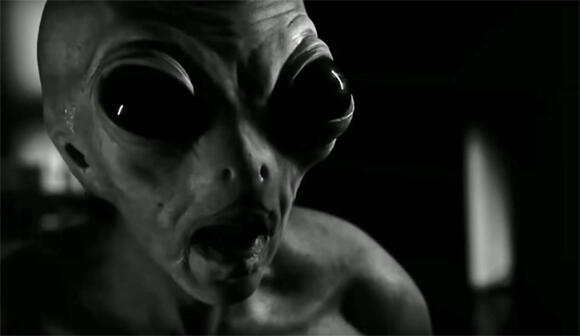 Ever since aliens first popped up on “ American Horror Story ” in 2012’s “Asylum,” fans have been dying to learn more about the little grey men. But they had to wait almost a decade to see the otherworldly creatures return, thanks to 2021’s “Double Feature” Part 2, titled “Death Valley.” If you’re having trouble remembering what’s up with the non-humanoids, you’ve come to the right place. Read on for everything to know about the “American Horror Story” aliens explained.

The extraterrestrials are first mentioned in the “American Horror Story” universe when they abduct and experiment on Kit Walker ( Evan Peters ) and his wife Alma ( Britne Oldford ) in the 1960s. Kit is returned to Earth in a wooded area that just so happens to be the site of Bloody Face’s ( Zachary Quinto ) many murders, so Kit is tried and convicted of being a serial killer. After Kit starts yapping about aliens, he is sentenced to Briarcliff Manor. The asylum’s creepy doctor, Arthur Arden ( James Cromwell ), later removes a spider-like piece of alien technology from Kit’s neck. This triggers the creatures to be interested in the asylum, and a drunk Sister Jude ( Jessica Lange ) soon sees an alien-like figure roaming the halls.

When Dr. Arden is performing surgery on another patient, Grace Bertrand ( Lizzie Brochere ), the aliens show up unexpectedly and abduct her. In order to get her back, he devises a scenario where he temporarily kills Kit so that the aliens will return. The plan works, with a bright light shining outside his office signaling Grace’s return … only she’s pregnant. Another abducted inmate, Pepper ( Naomi Grossman ), explains the ETs have the ability to control humans’ minds and bodies. She is proven right when Dr. Arden tries to cut into Grace’s stomach and his scalpel flies across the room.

Grace delivers her baby, which luckily appears to be human. She believes Kit to be the father and that their baby will have special powers thanks to the aliens’ influences. When Kit eventually leaves the asylum, his first wife Alma is returned to earth and she is also now with child. Soon after his 40th birthday, Kit’s friends assume he dies of pancreatic cancer, but in reality he is abducted for the final time and never seen again. Producers Ryan Murphy and Tim Minear likened these “Asylum” extraterrestrials to being “an obvious metaphor for God” and “the closest things to angels,” respectively.

Much of the “Asylum” storyline took place during the 1960s, around the same time frame the visitors were working with President Dwight D. Eisenhower ( Neal McDonough ) to create alien-human hybrids in “Double Feature.” Eisenhower becomes involved in the conspiracy after a UFO is shot down by the Air Force in Palm Springs, California. That leads him to discover none other than Amelia Earhart ( Lily Rabe ), who originally went missing in 1937. The aviation pioneer is now pregnant and has strange markings on her back, but she freaks out when the doctors suggest she may have been abducted. Amelia’s baby later rips out of her body, killing her instantly.

The scientists acquire a non-human body from the wreckage that is grey and smooth and has big black eyes. However, when they perform an autopsy, they discover it’s just a shell and the actual alien is hiding within — it’s a strange blob shape that attaches to their faces and explodes their heads. Just like in “Asylum,” the “Death Valley” aliens have the ability to control humans. However, it’s much more obvious now as they make peoples’ eyes turn white and their bodies float off the ground. One person they control is Mamie Eisenhower ( Sarah Paulson ), who tells her husband that he must work with the aliens. The goal, she believes, is to acquire their advanced technology, including microwaves, in the hopes of saving Earth.

Decades later in the present day, four college students are all abducted and returned to Earth pregnant — two women, two men. This marks the first time in “AHS” history that men are seen to be pregnant, suggesting the aliens have found a way to make the unthinkable happen in the years since Kit was first abducted. When it’s time to give birth, the four characters are abducted and placed in Area 51. They meet a hybrid named Theta ( Angelica Ross ), who reveals the alien planet — not Earth — is the one that will be saved by the new species.

In the “Double Feature” finale, the aliens finally, after decades of research, create the perfect alien-human hybrid. They decapitate the host, Kendall Carr ( Kaia Gerber ), and then replace her head with a large silver orb so they can use her body to create countless more hybrids. A still-alive Mamie tries to stop them, but she is killed by Theta. Thus, it’s presumed the aliens now have all they need to take over the planet. Another race of reptile-like extraterrestrials are mentioned in this season, but little is known about their existence.

Silicon Valley's Amanda Crew and Midnight Mass actor Zach Gilford will fend off disturbed kids in a new horror flick. According to Variety, director Roxanne Benjamin's movie There's Something Wrong with the Children is already shooting in New Orleans, with a script by TJ Cimfel and David White. Related: Midnight...
MOVIES・10 DAYS AGO
thedigitalfix.com

Encanto ending explained: how does the new Disney movie end?

Encanto is the latest animated movie from Walt Disney Studios and is a colourful musical that puts family at the centre of its story. It's an adorable feature but, let's be frank, if you aren't paying attention, it's easy to miss out on key details in this Disney movie. From mystical visions to keeping track of 12 different family members, all within the space of 90 minutes, getting distracted during the fantasy movie isn't hard. You may be left wondering, how does Encanto actually end? Warning spoilers ahead!
MOVIES・11 DAYS AGO
TheWrap

A version of this story about “Midnight Mass” and creator Mike Flanagan first appeared in the Documentaries issue of TheWrap magazine. After using Shirley Jackson’s “The Haunting of Hill House” and Henry James’s “The Turn of the Screw” as the inspirations for his first two Netflix hits — “The Haunting of Hill House” and its followup “The Haunting of Bly Manor,” respectively — Mike Flanagan turned another classic horror text as the basis for “Midnight Mass,” his latest limited series: the Bible.
TV & VIDEOS・6 DAYS AGO
bloody-disgusting.com

The Queer Horror of “Chucky”: Episode 7 – “Twice The Grieving, Double The Loss”

Each week Joe Lipsett will highlight a key scene or interaction in Don Mancini’s Chucky series to consider how the show is engaging with and contributing to queer horror. We’re into the homestretch now. This penultimate episode of Chucky’s first season* really kicks the plot into overdrive as everyone descends upon Hackensack and the show sets the literal stage for a big finale at a charity screening of Frankenstein.
TV SERIES・13 DAYS AGO

The Omicron variant is detected in the United States. Review-Journal editorial cartoonist Michael Ramirez is a two-time winner of the Pulitzer Prize and a three-time winner of the Sigma Delta Chi Award.
ENTERTAINMENT・3 DAYS AGO
CinemaBlend

There are some awesome sci-fi movies out there. There are some amazing horror movies as well. What do you get when you combine both? The brilliant sci-fi horror. Sci-fi horror is one of those genres where they mix in the wonder of science fiction and the scares of horror to create a beautiful masterpiece of a film.
MOVIES・8 DAYS AGO
Variety

HBO announced that director, writer and producer Craig Zobel has extended his overall deal for three additional years. Most recently, Zobel directed the 2021 HBO limited series “Mare of Easttown,” which stars Kate Winslet as a police detective in a Philadelphia suburb investigating the recent murder of one girl and year-long disappearance of another. The series, which also starred Julianne Nicholson, Jean Smart, Evan Peters and Guy Pearce, was nominated for the 2021 Emmy for outstanding limited series and Zobel was nominated for the award for limited or anthology series director. Zobel is also known for serving as the sole director and...
MOVIES・16 HOURS AGO
Cosmopolitan

Netflix's upcoming Western film The Power of the Dog lands next month, and while there's a lot of hype surrounding the film - from the killer cast to the moody cinematography - it's Benedict Cumberbatch's pretty extreme acting methods that have got people talking. During a recent interview, the Sherlock...
MOVIES・16 DAYS AGO

It’s not Alien, but Bravo squad’s tangle with a mucus-coated scarer will keep you from dozing off after the pub
MOVIES・2 DAYS AGO
IndieWire

In the beginning, there was light. And then, there were movies. And then, not long after that, there were people who watched those movies and snarked, “Well, that’s two hours I’ll never get back” (though it wouldn’t be surprising if that barb originated before the advent of multiple-reel cinema, maybe with some monocled jackass who wasted an entire minute of his life at a screening of William Heise’s 1896 short “The Kiss” only to discover that there wasn’t any tongue). As Charlie Kaufman is fond of pointing out, however, every two hours is two hours that you’ll never get back....
MOVIES・13 HOURS AGO
Variety

The “Yellowstone” prequel series “1883” at Paramount Plus has added Graham Greene to its cast, Variety has learned exclusively. The prequel series follows the Dutton family as they embark on a journey west through the Great Plains. Greene will play Spotted Eagle, a Crow elder who spots the wagon train and tells James Dutton about the place, Paradise Valley, where he should settle with his family. Greene earned an Academy Award nomination for his role as Kicking Bird (Ziŋtká Nagwáka) in “Dances with Wolves.” He is also known for starring in films like “The Green Mile,” “Maverick,” and “Wind River,” the last of...
TV SERIES・1 DAY AGO
TheWrap

It was during the production of their 2018 Oscar nominated documentary “RBG” that directors Julie Cohen and Betsy West fully learned about the incredible life and career of Pauli Murray. An influence on Ruth Bader Ginsberg, Thurgood Marshall and countless others, Murray was a lawyer, legal scholar, civil rights activist, Episcopal priest, poet and (perhaps unknowingly at the time) an icon for LGBT rights, especially transgender rights.
MOVIES・14 DAYS AGO

Developer One-O-One Games and Meta Publishing have pulled the curtain back on Aftermath, a new survival horror game coming next year. Players control an astronaut who returns to Earth after a mission only to find the planet upended by an alien invasion. After a botched reentry to Earth, protagonist Charlie...
VIDEO GAMES・4 DAYS AGO
Deadline

EXCLUSIVE: Basketball legend and activist Jaci McCormack has teamed up with award-winning writer Erica Tremblay (Little Chief, Yellow Bird) of the Seneca-Cayuga Nation to pen Rise Above, a feature film about the challenges and triumph and how her love of basketball protected and elevated her through it all.  The film will be directed by Dennis Lee (Fireflies in the Garden) and produced by his Atomic Features partner Daniel Ragussis (Imperium), and Tremblay. Basketball Hall of Fame players Lenny Wilkens and Gary Payton, Hollywood icon Danny Glover, and longtime civil rights activist Gus Newport will executive produce. “Jaci’s story is an incredible example of...
MOVIES・5 DAYS AGO