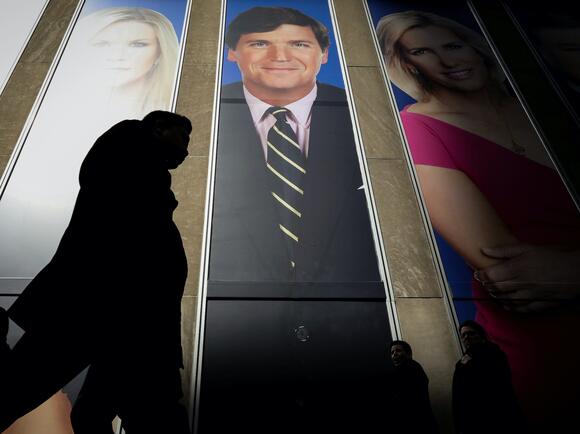 Fox News CEO Suzanne Scott granted a rare interview to The Hollywood Reporter and refused to weigh in on her most-viewed host's anti-vaccine rhetoric.

Scott, who said she's vaccinated, touted Fox PSAs for the vaccine and personal testimony of several anchors who've shared their experience getting the jab.

Yet when it came to whether Carlson's rhetoric alarms her, she drew an iron curtain and presented a united front.

Even as the network made an all-out blitz to promote the safety and efficacy of COVID-19 vaccines back in July, Carlson contradicted his colleagues and continued his months-long pattern of making baseless claims about the shots' safety and personally attacking medical experts advocating for the inoculations, telling his average of 3 to 4 million viewers to ignore "medical advice on television."

Carlson has also frequently invited novelist and former New York Times reporter Alex Berenson on his show, despite his claims about COVID-19 and vaccines being thoroughly debunked .

After repeated requests from Insider, Fox News still will not say if Tucker Carlson has been vaccinated or if he plans to be.

In line with Fox's PR messaging around the pro-free speech and anti-cancel culture ethos of their cable and streaming programming, Scott compared the powerful 25-year-old network to a regular American family.

Carlson maintains the record for the most-watched show in the history of cable news.

I thought all of fox news corp was mandated to get the vaccine. He wont confirm or deny that he got it. And people actually listen to him and look at him as credible. Another tv personality joker. He's laughing all the way to the bank.

Alex Berenson is an excellent reporter. His reports are backed up with fact's. His reports have NEVER been thoroughly debunked, only leftist have accused him of lying.

'She's lost it': Fox News host Maria Bartiromo and AG Bill Barr got into a shouting match about the 2020 election, book says

Former Attorney General Bill Barr told Jonathan Karl that the Fox News anchor "called me up and she was screaming." Bartiromo denied his account.
POLITICS・20 DAYS AGO
AOL Corp

Fox News correspondent-at-large Geraldo Rivera got worked up while discussing Aaron Rodgers on Tuesday’s Hannity. Fox News personalities Sean Hannity and Dan Bongino argued with Rivera about the backlash Rodgers has endured after lying about his vaccine status and thwarting NFL protocols. Rivera thought the backlash was appropriate and also pushed back against other people lying about their vaccination status.
NFL・26 DAYS AGO
HuffingtonPost

Fox News correspondent Gillian Turner is urging the conservative network’s viewers not to interpret Kyle Rittenhouse’s acquittal as a cause for celebration. In Monday’s installment of “Outnumbered,” which touched on President Joe Biden’s varied responses to the verdict, Turner noted that it was “particularly hard for facts to break through all the emotion” in the media’s coverage of the trial.
POLITICS・13 DAYS AGO
Washington Post

As two Fox contributors quit over Tucker Carlson, an alarming truth is revealed

It is fitting that two Fox News contributors have severed their ties with the network over Tucker Carlson’s glorification of Jan. 6 at exactly the moment when more than 150 scholars are sounding a loud, clanging alarm about the future of our democracy. Opinions to start the day, in your...
ENTERTAINMENT・13 DAYS AGO

Fox News anchors Bret Baier and Chris Wallace bristled at the direction the network is headed, skewing away from news and more towards a nearly full-time editorial bent, according to a lengthy report by NPR. Baier and Wallace, according to the report, “shared their objections with Fox News Media CEO...
TV & VIDEOS・13 DAYS AGO
mediaite.com

Chris Stirewalt, the former Fox News digital politics editor, said it was “beyond reckless” for his former network to produce Tucker Carlson’s January 6th series Patriot Purge. Stirewalt, who is currently a contributing editor of The Dispatch and resident fellow at the American Enterprise Institute, was fired from Fox News...
ENTERTAINMENT・2 DAYS AGO
Rolling Stone

There appears to be quite a bit of tension inside Fox News over the extremist views of the network’s most popular host. Host Bret Baier publicly admitted on Monday that there were internal “concerns” at the network about the Tucker Carlson-produced documentary, Patriot Purge. The controversial documentary suggested Jan. 6 was a “false flag” operation and aired on the network’s streaming platform. During a recent interview on fellow Fox News host Brian Kilmeade’s radio show, Baier seemed a bit uncomfortable when Kilmeade asked about two network contributors, Jonah Goldberg and Stephen Hayes, who resigned in protest over the network’s choice to...
ENTERTAINMENT・12 DAYS AGO
mediaite.com

Fox News host Tucker Carlson defends Chris Cuomo after CNN suspension: 'What a thing to be fired for'

I quit Fox News after more than a decade as a contributor. So did my business partner and friend Steve Hayes. We explained our reasons on the Dispatch, a media company we founded. But the decision was a long time in coming. Like Ernest Hemingway’s description of bankruptcy, it came gradually and then suddenly.
ENTERTAINMENT・9 DAYS AGO
mediaite.com

Following her comments about Dr. Anthony Fauci during a Fox News appearance on Monday, Lara Logan has been noticeably absent from the airwaves this week, having made zero appearances since. “Has Lara Logan been quietly benched by Fox News? All indications are yes,” CNN’s Oliver Darcy pointed out in the...
ENTERTAINMENT・1 DAY AGO
The Independent

Fox News commenters Jonah Goldberg and Stephen Hayes resigned from the network this weekend in protest. The two said they could no longer work at an organization that promoted Donald Trump’s lies and conspiracy theories about 2020 election fraud. In particular, they pointed to Patriot Purge, hosted by Tucker Carlson, a Fox series about the January 6th insurrection that falsely and incoherently claims the American left is using government resources to imprison and torture noble right-wing patriots.It’s important to have responsible voices on the right denouncing Fox. Conservative partisans, and Fox audiences, need to hear the truth from voices...
U.S. POLITICS・13 DAYS AGO

Tucker Carlson responded to two contributors who resigned in protest of his Fox Nation series on the Jan. 6 riot at the U.S. Capitol. Jonah Goldberg and Stephen Hayes, co-founders of center-right news outlet The Dispatch and regulars on Bret Baier’s news show Special Report, resigned from Fox News in protest of its coverage.
PROTESTS・13 DAYS AGO
AOL Corp

Two conservative commentators who have appeared on Fox News for more than a decade have resigned from the right-wing network over what they say is a “dangerous” Tucker Carlson special filled with lies about the Jan. 6 insurrection. Jonah Goldberg and Stephen Hayes, two co-founders of the conservative website The...
TV & VIDEOS・14 DAYS AGO
Deadline

Two Fox News Contributors Quit, Citing Tucker Carlson’s January 6 Series: “The Voices Of The Responsible Are Being Drowned Out By The Irresponsible”

Stephen Hayes and Jonah Goldberg, two longtime conservative commentators on Fox News, said that they are quitting the network, concluding that “the voices of the responsible are being drowned out by the irresponsible.” They specifically cited Tucker Carlson’s three-part documentary Patriot Purge, which ran on Fox Nation, which they said was “a collection of incoherent conspiracy-mongering, riddled with factual inaccuracies, half-truths, deceptive imagery, and damning omissions. And its message is clear: The U.S. government is targeting patriotic Americans in the same manner —and with the same tools—that it used to target al Qaeda.” The series advanced a series of conspiracy theories about...
TV & VIDEOS・14 DAYS AGO
HuffingtonPost

Patriot Purge, the Tucker Carlson Originals Fox Nation docuseries that argued that the Jan. 6 U.S. Capitol takeover was a "false flag" and the consequence has been the persecution of conservatives, reportedly rankled several Fox News staffers. Contributors Jonah Goldberg and Stephen Hayes are the first Fox News employees to resign over the three-part docuseries. Meanwhile, NPR's David Folkenflik reports: "Veteran figures on Fox's news side, including political anchors Bret Baier and Chris Wallace, shared their objections with Fox News Media CEO Suzanne Scott and its president of news, Jay Wallace. Those objections rose to Lachlan Murdoch, the chairman and CEO of the network's parent company, Fox Corporation. Through a senior spokeswoman, Scott and Wallace declined comment. Murdoch did not return a request for comment through a spokesman. Goldberg says that he had been assured by Fox's news leaders that, as Trump left Washington D.C. following his defeat, the network would tamp down on incendiary commentary and claims. Instead, Goldberg says, the decision by Fox's election analysts to be the first to project that Biden would win Arizona on Election Night last November led the network's stars, including Carlson, to demonstrate their dedication to Trump and his most adamant fans. And that led Fox's opinion stars to embrace increasingly indefensible positions, Goldberg argues."
TV & VIDEOS・13 DAYS AGO
mediaite.com

The New York Times has pulled ads from Fox News after a campaign “accidentally” aired on Fox opinion shows, including the program on which Lara Logan compared Dr. Anthony Fauci to Nazi criminal Josef Mengele. CNN Reliable Sources co-author Oliver Darcy writes that he and other Fox News viewers might...
TV & VIDEOS・1 DAY AGO
Marconews.com

PLACIDA – Kyle Rittenhouse was spotted eating at a Placida restaurant, according to a tweet from Republican Party of Florida Chair of Chairs Evan Power. Rittenhouse recently spoke with FOX News host Tucker Carlson, for an interview that will be reportedly be broadcast Monday night. The tweet by Power shows...
FLORIDA STATE・14 DAYS AGO
CNN

(CNN Business) — A version of this article first appeared in the "Reliable Sources" newsletter. You can sign up for free right here. The exalting of Kyle Rittenhouse reached new heights on Monday evening when Tucker Carlson used his top-rated Fox News prime time program to lavish even more praise on the teenager.
ENTERTAINMENT・13 DAYS AGO