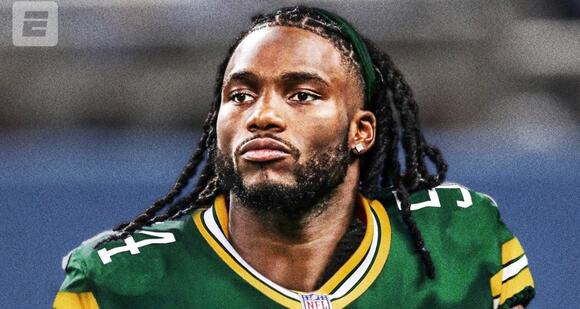 After the surprising news that linebacker Jaylon Smith would be cut, questions began to swirl as to why the Dallas Cowboys would part ways with one of its once-promising future stars.

We now have one answer: Early Thursday morning, Smith finalized his new deal - a one-year contract - with the Green Bay Packers. And more, we have the dollar figure in Green Bay: Per NFL Network ... $770,000.

The suggestion here, by the way, is that there is not much if any "offset-language'' relief for Dallas, which is stuck with the $7.2 million bill.

In 2019, Smith signed a five-year, $64 million contract extension with the Cowboys with $35.5 million guaranteed, keeping him under contract through 2024.

If the Cowboys kept Smith in 2022 and he were to sustain a season-ending injury, his contract would be fully guaranteed next season, costing the team $11.2 million.

By releasing him Monday, the Cowboys still were to owe Smith $6.8 million in dead cap next season. ... but there is offset language in his deal that can save Dallas some money depending on his Green Bay salary.

The team is also investing its future in first-round pick Micah Parsons, who has looked phenomenal in his first four games of his NFL career. And rookie Jabril Cox is in play here as well.

Dallas is developing into a good team … As long as it’s a healthy team.

"Here's a coach that's 0-4 in a bar after a loss getting a lap dance," Bennett writes. "This coach is not focused on winning. His mind is elsewhere."

Jettisoning Jaylon: Too Many Bucks, Not Enough Bang

Cutting Smith is disappointing considering how valuable he once was to the Cowboys, but this proves how quickly things change in the NFL and how shocking moves come with its fair share of pros and cons.

In this episode of the "Locked On Cowboys" Podcast, hosts Marcus Mosher and Landon McCool discuss the Cowboys releasing Smith and why they made the move now.

Plus, they review their notes after watching the All-22 film in Week 4. They discuss Connor Williams and Zack Martin vs. Panthers, how the Cowboys deployed Micah Parsons.

Marcus and Landon deal with all that more on this episode of "Locked On Cowboys." Join us here!

Add that 700+ to the money the cowboys still owe for this season and he's good. This is why players NEED TO/SHOULD look out for themselves first when it comes to their contracts( even though the money is coming from their own soc. sec. account anyway) before the team. The owners are more interested in lining their own pockets than team success. Why shouldn't the players be the same way?

That’s a hellva cut from millions but I guess he had to play somewhere. He’ll always be a Cowboy, and best wishes for him forward

Jerry Jones is so rich that letting Jaylon Smith go was no big deal. I personally hope he show out on the football field and be a very good player.

The Packers finished their Week 11 loss to the Vikings without most of their Pro Bowlers. In addition to David Bakhtiari and Aaron Jones‘ absences, Elgton Jenkins suffered a torn ACL. And the outing marked yet another game without Za’Darius Smith and Jaire Alexander. The lack of concrete timetables over...
NFL・12 DAYS AGO
FanSided

Former Kansas City Chiefs linebacker Nate Orchard has a found a new team with which to play—a feat that’s a bit harder for a guy like Orchard (at least in terms of the word “new”) considering his journeyman status. Orchard just signed with the Green Bay Packers earlier this week...
NFL・12 DAYS AGO
95.5 FM WIFC

CANTON, OH (WSAU) — The Pro Football Hall of Fame has announced the list of 26 modern-era players who are considered semi-finalists for the enshrinement with the Class of 2022, including a former Packers Safety. LeRoy Butler is the only player with ties to the Green and Gold named on...
NFL・14 DAYS AGO
Los Angeles Times

The Times' Sam Farmer analyzes each matchup and predicts the winners of Week 12 of the 2021 NFL season.
NFL・13 DAYS AGO

The Green Bay Packers signed LB Nate Orchard to the practice squad and released RB Kerrith Whyte from the practice squad. General Manager Brian Gutekunst announced the transactions Thursday. Orchard, a 6-3, 250-pound, sixth-year player out of the University of Utah, was originally selected by the Cleveland Browns in the...
NFL・13 DAYS AGO
Packers.com

The Green Bay Packers elevated LB La'Darius Hamilton from the practice squad to the active roster for gameday as a COVID-19 replacement. The transaction was announced Saturday by General Manager Brian Gutekunst.
NFL・11 DAYS AGO
CowboyMaven

The Dallas Cowboys host the reeling Las Vegas Raiders Thursday afternoon in an annual holiday tradition as reliable as gobbling turkey on Thanksgiving. More than 90,000 fans will pile into AT&T Stadium in hopes for a Cowboys victory in in the 54th annual Thanksgiving Day game. Both the Cowboys and...
NFL・13 DAYS AGO
Acme Packing Company

The Green Bay Packers announced on the league wire on Tuesday that inside linebacker De’Vondre Campbell has been placed on the reserve/Covid-19 list after testing positive for the virus, per NFL Network’s Tom Pelissero. Campbell, who signed a one-year deal with the Packers this summer, has started every game for the team in 2021 and up to this point has played at a Pro Bowl level.
NFL・8 DAYS AGO

A year ago, Za’Darius Smith was closing in on his second straight season with double-digit sacks. Through his first two years with the Packers, Smith had done nothing but validate the 4-year, $66MM contract he’d earned in free agency. Unfortunately, a back injury that has forced the seven-year veteran to miss all but 18 snaps of the 2021 season will require the Packers and Smith to have some tough conversations.
NFL・10 DAYS AGO
ESPN

GREEN BAY, Wis. -- Aaron Jones has gone from tears on the sideline thinking his season might be over to missing only one game as the Green Bay Packers running back is active and available for Sunday's game against the Los Angeles Rams. The Packers also cleared receiver Allen Lazard...
NFL・10 DAYS AGO
CowboyMaven

Cowboys BREAKING: Amari Cooper Still Sick, Did Not Practice; In Doubt vs. Saints

FRISCO - The Dallas Cowboys have lost two straight, and three of their last four games. But in terms of how the roster is about to shake up, there continue to be ups and downs - especially in the COVID department. That optimism for the 7-4 club comes in part...
NFL・8 DAYS AGO
CowboyMaven

FRISCO - For most of the 2021 season, Dallas Cowboys standout running back Ezekiel Elliott has been nursing a knee injury, an ailment that for the first time Zeke conceded might have impacted a game plan. “Yeah, I don’t know,'' he said after the Cowboys' 36-33 OT loss to the...
NFL・12 DAYS AGO

The Dallas Cowboys host the reeling Las Vegas Raiders Thursday afternoon in an annual holiday tradition as reliable as gobbling turkey on Thanksgiving. More than 90,000 fans will pile into AT&T Stadium in hopes for a Cowboys victory in in the 54th annual Thanksgiving Day game. Both the Cowboys and...
NFL・14 DAYS AGO
CowboyMaven

Since entering the league in 2016, nobody has more rushing yards than Dallas Cowboys running back Ezekiel Elliott. Elliott is a huge part of the Cowboys' winning formula, and his subpar performance helps explain why the team fell to the Las Vegas Raiders 36-33 in overtime on Thanksgiving Day. Elliott...
NFL・11 DAYS AGO
CowboyMaven

Amari Activated, But Could Cowboys’ Cooper Decoy at Saints?

The Dallas Cowboys activated Amari Cooper off the COVID list and back onto the roster Wednesday, making him eligible to play in the 7-4 club’s Thursday night visit to New Orleans. But does “eligible” mean he’ll actually play? Does clearance mean the Pro Bowl receiver is feeling well enough -...
NFL・6 DAYS AGO
CowboyMaven

FRISCO - When the Dallas Cowboys defense takes the field Thursday night, it could be getting a new version of their opponent the New Orleans Saints. And when the Cowboys offense takes the field? At the wide receiver spot, could be more of the same. The final Cowboys and Saints...
NFL・7 DAYS AGO
CowboyMaven

The Dallas Cowboys cooked up a Thanksgiving touchdown in their second offensive drive of the day on Thursday against the Raiders at AT&T Stadium. Dak Prescott completed a nine-play, 75-yard drive that ended in the first NFL touchdown for second-year tight end Sean McKeon. McKeon had four career receptions coming...
NFL・13 DAYS AGO
CowboyMaven

FRISCO - Trysten Hill's two-game suspension, handed down by the NFL on Monday, is on Tuesday in the league’s appeal process, the Dallas Cowboys hoping the defensive tackle will be allowed to play on Thursday at New Orleans. “If the appeal process gives him the opportunity to play Thursday, then...
NFL・8 DAYS AGO
CowboyMaven

Are Cowboys Sticking With Kicker?

"We have the utmost confidence in Greg. He’s our kicker.” - Cowboys COO Stephen Jones. 'Absurd,' Says Mike McCarthy of Penalties - So Coach Calls the NFL. "I’ve already talked to the league this morning, and I anticipate a second conversation, maybe this afternoon.'' - Mike McCarthy. By. and Mike...
NFL・12 DAYS AGO
CowboyMaven

If the Dallas Cowboys want to walk away victorious Thursday against the Las Vegas Raiders, they will need to find a way to stop Derek Carr. Carr has been sacked 22 times through the first 10 games, eighth-most in the NFL, opening the door for the Cowboys pass rush to unlock a key to victory.
NFL・14 DAYS AGO