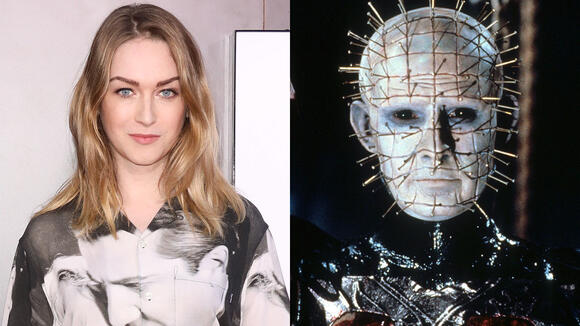 In a casting that gender-reverses an iconic horror movie character, Jamie Clayton, one of the stars of The L Word: Generation Q , is starring as Pinhead in Spyglass’ reboot of 1980s classic Hellraiser .

The project is described as a “loyal, yet evolved reimagining” of the movie based on Clive Barker ’s novella The Hellbound Heart. Barker expanded the story into a 1987 movie he wrote and directed about a puzzle box that opens a gateway to a horrific world run by Cenobites, mutilated beings dedicated to torture and led by a prickly headed man nicknamed Pinhead.

Pinhead, and his unique look, became central to the horror franchise that launched numerous movies, comics and merchandise.

The new Hellraiser recently wrapped production, and Spyglass on Thursday revealed the cast. Odessa A’zion is starring alongside Clayton in the movie, which will debut on Hulu sometime in 2022.

Also announced was that Barker has boarded the project as a producer, joining Phantom Four’s David S. Goyer and Keith Levine. Also new as a producer is Marc Toberoff, the intellectual property attorney who has previously made headlines repping estates of comic creators such as Jack Kirby, Jerry Siegel and Joe Shuster.

David Bruckner ( The Night House ) is directing from a screenplay by Ben Collins and Luke Piotrowski with story by Goyer.

Barker’s boarding comes after a legal battle in which the author regained American rights to the franchise due to copyright law and a settlement with a production company. Barker is due to recapture U.S. rights on Dec. 19, 2021.

Barker was all praise on the new take on his creations.

“Having seen some of the designs from David Bruckner’s new Hellraiser film, they pay homage to what the first film created, but then take it to places it’s never been before,” he stated. “This is a Hellraiser on a scale that I simply didn’t expect. David and his team are steeped in the story’s mythology, but what excites me is their desire to honour the original even as they revolutionize it for a new generation.”

A strong cast and tightly focused direction make The Unforgivable an engrossing enough redemption drama, though this Americanized feature adaptation of British TV writer Sally Wainwright’s 2009 miniseries, Unforgiven, doesn’t always benefit from its condensed plotting. A deglammed Sandra Bullock headlines as Ruth Slater, an ex-con attempting to find a quiet place in the free world, who wants only to reconnect with her younger sister after serving 20 years for a violent crime. Following her Berlinale prize winner System Crasher, German director Nora Fingscheidt makes a respectable English-language debut with this somber look at the ripple effects of trauma. Bullock’s star...
MOVIES・3 DAYS AGO
The Hollywood Reporter

Cary Elwes on ‘MI:7’ Production Snags, His Return to Rom-Coms and Standing Firm Against a ‘Princess Bride’ Reboot

Cary Elwes is a busy man. In addition to appearing in the highly anticipated (and secretive) Mission: Impossible 7, the iconic English actor is a part of the upcoming Guy Ritchie project, Operation Fortune: Ruse de guerre. Elwes is also making his first return to the rom-com world since The Princess Bride (1987) in Nextflix’s A Castle for Christmas, which premieres Nov. 26. And just for good (holiday) measure, he also stars with Michael Sheen in Last Train to Christmas, which will debut on the British subscription film service Sky Cinema on Dec. 18. The Hollywood Reporter recently caught up with Elwes to...
MOVIES・3 DAYS AGO
The Hollywood Reporter

Casey Affleck has lined up his next lead role. The Oscar-winning star of Manchester By The Sea – recently seen in The World to Come and Our Friend — will appear alongside Tony and Emmy winner Laurence Fishburne (The Matrix, John Wick) in the psychological sci-fi thriller Slingshot, being directed by Mikael Håfström (Outside the Wire, Escape Plan, The Rite, 1408). From a screenplay by R. Scott Adams (Donner Pass) and Nathan Parker (Moon), Slingshot will tell the story of an astronaut struggling to maintain his grip on reality aboard a possibly fatally compromised mission to Saturn’s moon Titan. Fast-rising British actress Emily Beecham...
MOVIES・4 DAYS AGO
Talking With Tami

Jamie Dornan is reflecting on struggling with the reception of Fifty Shades of Grey and its sequels. The actor, who stars in Kenneth Branagh's Belfast, attended a live chat with British GQ where he spoke about the backlash surrounding the films. "There's nothing like Fifty Shades in terms of, it...
MOVIES・11 DAYS AGO
epicstream.com

Fifty Shades of Grey Star Jamie Dornan Could Be MCU-Bound

We could be seeing the Christian Grey actor in the MCU real soon. It wouldn't be an over-exaggeration to say that Hollywood seemingly revolves around Marvel right now and as the franchise continues to expand its universe, more and more actors are expressing their interest to join the lucrative billion-dollar franchise. Apparently, that includes Irish star Jamie Dornan who is best known for his role as Christian Grey in the Fifty Shades trilogy.
MOVIES・9 DAYS AGO
justjaredjr.com

Griffin Johnson To Star In New Movie With Samantha Boscarino - Get the Details!

Griffin Johnson is the latest TikTok star to land a lead role in a movie!. The 22-year-old has been cast in Diamond In The Rough, opposite Samantha Boscarino, Variety reveals. Creator Plus, a movie studio centered on digital creators and influencers, are producing the pic, which is set to begin filming this week in Los Angeles.
LOS ANGELES, CA・9 DAYS AGO
ComicBook

Safe House, a crime thriller starring Denzel Washington and Ryan Reynolds, has found a great second life on Netflix as of late, putting up solid streaming numbers and reaching new viewers nearly a decade after its theatrical debut. This week, another one of Washington's films is making the move to Netflix, and there's a good chance it could see a similar kind of popularity with viewers thanks to the star power of Denzel.
MOVIES・27 DAYS AGO

Channing Tatum to Direct and Star in New Movie

The ‘Magic Mike’ actor is playing two roles…in front and behind the camera…for his next film. Tatum direct and star in the comedy ‘Dog’ where he plays an army ranger who gets paired up with an unlikely companion…a dog named Lulu. The film is set to be released in theaters on February 18th.
MOVIES・9 DAYS AGO
ABC11 Eyewitness News

"She proves to the general public that deaf people can do anything! And deaf people can be actors, actresses. And I'm so grateful for her especially being in a Marvel movie, that is very inspiring!"
MOVIES・14 DAYS AGO
TVOvermind

Death is never an easy thing to deal with, but it is especially difficult when it happens to someone who is young and hasn’t gotten the chance to meet their full potential. Sadly, that was the case for up and coming actor, Joey Morgan. The talented young performer was just getting his feet wet in the entertainment industry and he appeared to have a bright future ahead of him. However, his life was cut short in November of 2021 when he suddenly passed away at just 28 years old. Even though he is no longer here, his memory will continue to live on through his work and the countless lives he touched. Keep reading to learn more about Joey Morgan’s legacy.
CELEBRITIES・2 DAYS AGO
allkpop.com

Go Hyun Jung may have scored herself a major new role!. The actress is currently in talks to star in the upcoming Netflix original series 'Mask Girl', in the role of main character Kim Momi. The character is an ordinary working woman with strong insecurity about her appearance who gets caught up in a variety of mishaps while working as a mask-wearing internet BJ. The actress playing Momi is said to change according to Momi's own changes, including her different ages.
MOVIES・2 DAYS AGO

[The following interview contains spoilers for Hawkeye‘s first two episodes.] Hawkeye stars Vera Farmiga and Tony Dalton have officially debuted on Hawkeye, Marvel Studios’ six-episode holiday event on Disney+. Farmiga and Dalton play Eleanor Bishop and Jack Duquesne, who are engaged to be married despite the doubts that Eleanor’s daughter, Kate (Hailee Steinfeld), has regarding Jack’s morality. While Kate raises some valid points about her potential stepfather’s character, Jack’s uncle, Armand Duquesne III (Simon Callow), voiced his own concerns about Eleanor before Kate eventually discovered his dead body inside his home. When asked about Armand III’s view of Eleanor, Farmiga instead...
TV SERIES・3 DAYS AGO
fox5atlanta.com

In VH1's new movie 'Adventures in Christmasing,' a successful talk show host finds her holiday plans upended when she's forced to spend days in the wild with a TV survivalist for a special. Actress and Atlanta native Kim Fields plays the starring role and talks about doing her own stunts and more on the film.
ATLANTA, GA・8 DAYS AGO
Variety

Actor Corey Hawkins is incredibly grateful to know Denzel Washington, his legendary co-star in “The Tragedy of Macbeth.” “I love that I get to walk in his footsteps, but I know I can never fill that man’s shoes,” Hawkins tells Variety’s Awards Circuit Podcast. “To share space to sit down in his dressing room, and talk, pray, listen, talk sports, talk whatever – they say never to meet your heroes but to finally dispel that rumor because he is the greatest of all time.” Listen to the full interview with actor Corey Hawkins in the latest edition of Variety’s Awards Circuit...
MOVIES・2 DAYS AGO
The Hollywood Reporter

Kirsten Dunst and Jesse Plemons met while playing a couple on the second season of Fargo, started dating after the show wrapped, got engaged and now have two young sons together. They have reunited again, this time on the big screen for writer-director Jane Campion in her Netflix drama The Power of the Dog, playing (you guessed it) a couple tormented by the brother (Benedict Cumberbatch) of Plemons’ character. And don’t expect it to be their last collaboration. Dunst told THR at the film’s AFI Fest premiere that the duo are planning their next outing as an acting team. “We actually...
LOS ANGELES, CA・4 DAYS AGO
digitalspy.com

Gotham star Cameron Monaghan stars as a lonely tech millionaire who gets more than he bargained for when he strikes up a romance with a mysterious, young woman in new action thriller Shattered – and its first trailer is absolutely wild. The actor, who is best known for playing the...
MOVIES・4 DAYS AGO
fox32chicago.com