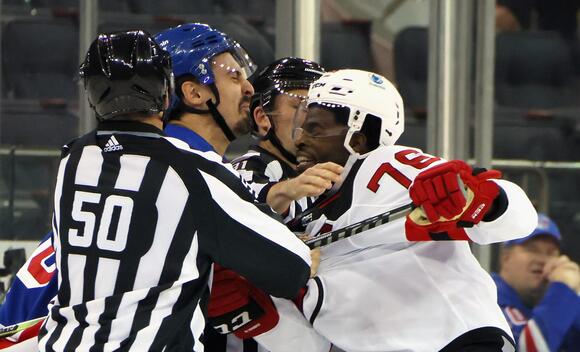 The Rangers had been consistently criticized for their lack of toughness last season, leading to a new front office regime that prioritized physicality in the offseason, with enforcer Ryan Reaves being among the notable additions.

But it was Reaves who fell to the ice with a leg injury after colliding with New Jersey’s P.K. Subban during Wednesday’s preseason game, meaning Reaves wasn’t around to deal out any retaliation. So Chris Kreider handled it, trying to drop the gloves with Subban right after the opening draw to start the second period before the two did tangle at the start of the third.

Subban, who appeared concerned for Reaves after the collision and called for a trainer, said that the takedown was unintentional, but he eventually had to stand up for himself after the Rangers continued to come after him.

“I’ve been playing in this league a long time,” Subban said after the Devils’ 6-2 loss, their first of the preseason. “I don’t go out there to try and injure anybody or do anything like that. I try to play the game fair, but I try to play hard, and that’s what I did in the third.”

“I just went into the corner, tried making myself big,” Subban said. “I tried to go in there and brace myself. Obviously my leg was still on the ice, kind of dragging a little bit. And I know his leg sort of buckled. It’s a tough play. Preseason, you try to go out and play and get your reps in, and hopefully you don’t get hurt or too banged up.

“He’s an important player for their team, and a guy that I know. It’s just unfortunate. I hate to see that. Obviously you saw my reaction after it happened, trying to help him, but I just hope it’s not too bad. It’s unfortunate.”

Rangers head coach Gerard Gallant told reporters after the game that he doesn’t believe Reaves’ injury to be serious, and didn’t think anything Subban did was intentional. But New York’s response seemed to be more in line with the identity the franchise tried to build starting in the offseason.

“Yeah, you gotta respond,” Subban said. “I think at the start of the second I was a little surprised. I wasn’t expecting that…but at the beginning of the third I wanted to give an opportunity for our team to get back in the game but also send a message that things happen in a game, and it was obviously an accident.”

Throughout his tenure with the Rangers, Ryan Strome’s job security has seemed to be relatively thin. Two years ago, the team acknowledged that it gave consideration to not tendering him a qualifying offer in part to avoid the risk of salary arbitration. Instead, the Rangers agreed on a two-year, $9M contract, one that ends in July.
NHL・10 DAYS AGO
bardown.com

Ryan Reaves explained why he didn’t fight P.K. Subban on Sunday. Anyone that tuned in to watch the Rangers and Devils game on Sunday was probably expecting a massive showdown between Rangers forward Ryan Reaves and Devils Defenceman P.K. Subban. But can you guess what happened? Absolutely nothing!. Reaves took...
NHL・13 DAYS AGO
Yardbarker

Reaves, who is listed at 6-foot-2 and 225 pounds, picked up the 72 fighting major of his career. The Rangers extended him soon after the trade with an additional year at $1.75 million. He’s a player the organization has been interested in for years and so far is providing the spark both on and off the ice the team wanted.
NHL・14 DAYS AGO
markerzone.com

RYAN REAVES SAYS HE HAS A PLAN FOR DEALING WITH P.K. SUBBAN

Many were surprised when New York Rangers tough guy Ryan Reaves didn't send a message to P.K. Subban through his fists the last time the New York Rangers and New Jersey Devils met. Not only did Subban injure Reaves in the preseason with a blatant slewfoot, he was involved in an incident with Reaves' teammate Sammy Blais that led to Blais being knocked out for the rest of the season. Speaking with Larry Brooks of the New York Post, Reaves said trying to fight Subban would be pointless.
NHL・13 DAYS AGO

GREENBURGH, N.Y. — Chris Kreider is cautious, ever so cautious, when talking about his terrific start to the season. "The whole team is playing well and we’re winning hockey games," Kreider said on Wednesday when asked about his scoring this season. "I think we’ve gotten better as a group." Perhaps...
NHL・13 DAYS AGO
markerzone.com

Tuesday night during a game between the Montreal Canadiens and New York Rangers, Habs rookie Michael Pezzetta decided to do something not a lot of players in the NHL are willing to do any more; challenge Ryan Reaves. Like him or not, Reaves is one of the last of the dying breed in the NHL; a player whose only purpose is to fight and defend teammates. While you have to credit Pezzetta for his gumption, the fight ended the way many thought it would, with Reaves absolutely dominating. Following the game, which the Rangers won 3-2, Reaves said Pezzetta challenged him, which he found somewhat confusing.
NHL・14 DAYS AGO
hockeyinsiders.net

New Jersey Devils' defenseman PK Subban hasn't been making any friends lately. Subban has come under fire for a handful of slew foots this season and players around the league aren't very happy about it. The latest slew foot found New York Rangers' forward Sammy Blais with a torn ACL...
NHL・13 DAYS AGO
Newsday

In the days after they somehow stole a victory over the league-leading Florida Panthers on Nov. 8, the Rangers were all too willing to admit that they hadn’t played as well as their record at the time suggested. But things have changed in the last week. The frenetic early-season schedule...
NHL・14 DAYS AGO

New York Rangers have finally found their swagger and he wears 75; Ryan Reaves

Former coach David Quinn used the term “swagger” over and over during his tenure. Mostly how the New York Rangers needed to find it. Swagger seemed to elude the Rangers at almost every turn over the last three seasons. That became glaringly obvious when they were manhandled by Tom Wilson at the Garden and the Islanders leading to another season with no playoff games.
NHL・13 DAYS AGO
Yardbarker

The New York Rangers had a great weekend. They won back-to-back games Saturday and Sunday, beating the Columbus Blue Jackets and New Jersey Devils. Chris Kreider and Artemi Panarin led the way on Saturday and Kappo Kakko finally found the scoresheet on Sunday with his first two points of the season. At the same time, Alexis Lafreniere scored a goal as well. Former Rangers defenseman Kevin Lowe was inducted into the Hockey Hall of Fame on Monday, and the Rangers sent Greg McKegg down to American Hockey League (AHL) affiliate Hartford Wolf Pack.
NHL・14 DAYS AGO
markerzone.com

New Jersey Devils defenseman P.K. Subban has certainly been drawing more than his fair share of attention this season for a series of slew-foot plays - the most recent of which having ended New York Rangers forward Sammy Blais' season. Subban has also caught Rangers forward Ryan Reaves and Calgary...
NHL・14 DAYS AGO
FanSided

Sometimes, a response doesn’t have to be physical. At least that’s what Chris Kreider expressed after the New York Rangers 5-3 road victory against Columbus on Saturday. A lot transpires between 36 adrenaline-bolstered men wagering war against one another every night; some altercations are visible to us, while others are not. In the last several games, the Rangers have endured several violations that say: it was time to be visible.
NHL・14 DAYS AGO

Enforcer Ryan Reaves gets ovation after first fight as a Ranger

After suffering a knee injury as the result of a preseason slew foot by Devils defenseman P.K. Subban, Ryan Reaves issued a veiled threat to the Devils’ defenseman by saying, “We play them a lot.”. Yet Sunday, when Sammy Blais suffered a season-ending torn right ACL after Subban had clipped...
NHL・14 DAYS AGO
WFAN Sports Radio

The Rangers had some comical reactions to Ryan Reaves’ first fight as a member of the team, which ended in dominant fashion during New York’s fourth straight win.
NHL・14 DAYS AGO
NHL

When you look at the scoresheet over the last six games, Devils defenseman P.K. Subban's name is a constant. With six points over six games, Subban is finding his groove. "He's made some really good offensive plays, he's made some great defending plays for us," Devils head coach Lindy Ruff said Monday after practice. "The pair of (Jonas) Siegenthaler and Subban has been a real good defensive pair for us. Some of it is his awareness to get in on plays, the other part is we know ultimately what P.K. can bring. I'd like to see him get to that high level and just stay there."
NHL・8 DAYS AGO
markerzone.com

New Jersey Devils defenseman P.K. Subban, in collaboration with popular sports brand Adidas and the Devils organization, has released a new line of sneakers. Subban, 32, tweeted out some snaps of his new kicks on Friday, that match the team's new "Jersey" designs that had been shared earlier this week, complete with the caption "Who wants to lace up?"
APPAREL・4 DAYS AGO

P.K. Subban was back in town Friday night, playing against his former team at Bridgestone Arena. And fans brought the boos for him. Subban was wearing a New Jersey Devils uniform, meaning Nashville Predators coach John Hynes' former team of four seasons was in town. The occasion also happened to...
NHL・4 DAYS AGO
New York Post

Rangers’ Chris Kreider attempted ‘The Michigan’ in win over Bruins

Chris Kreider had fans buzzing in the Rangers win against the Bruins on Friday. The winger attempted a lacrosse-style move behind the net, which the Rangers Twitter account said was “so close to breaking the internet.”. Kreider flipped the puck onto his stick while skating behind the net and swung...
NHL・4 DAYS AGO
New York Post

As dangerous as Chris Kreider has been on the power play this season, especially in front of the net, the 30-year-old winger credits the rest of the Rangers’ first man-advantage unit for developing the art of getting him the puck. Particularly Artemi Panarin, who Kreider said he believes is one...
NHL・1 DAY AGO
Newsday

GREENBURGH, N.Y. – Chris Kreider would have made probably every Top 10 highlight show if he’d been able to score on that lacrosse-style shot he took against Boston Bruins goalie Jeremy Swayman Friday in the Rangers’ 5-2 victory over the Bruins in Boston. Replay confirmed the puck had not gone...
GREENBURGH, NY・1 DAY AGO