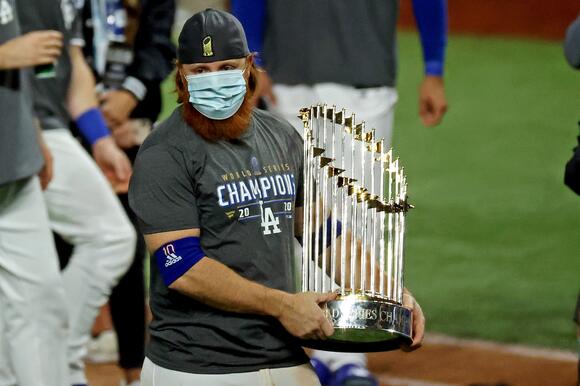 The Los Angeles Dodgers are the reigning champions, winning the World Series in the shortened 2020 season to snap a title drought that dated back to 1988, but the 106-win team will have its hands full in NLDS against the San Francisco Giants. Our experts are split on an NL winner with half picking the Dodgers and half taking the Milwaukee Brewers.

In the AL, the Tampa Bay Rays are looking to get back to the World Series after falling short in six games last year. They're the most popular AL pick among our experts, with four of six taking Tampa Bay to reach the Fall Classic.

Brewers over White Sox in 7: Titletown, USA? The Milwaukee Bucks won their first NBA in 50 years, and now it could be the Brewers winning their first World Series in their 53-year franchise history. The Brewers DNA is pitching with Cy Young favorite Corbin Burnes, Brandon Woodruff and Freddy Peralta, along with baseball’s best closer in Josh Hader.

Dodgers over Astros in 6 : From 1 to 25, nobody can touch this roster. Nor the combo of Walker Buehler, Max Scherzer and Julio Urias.

Rays over Dodgers in 6: It's a repeat of 2020 World Series, this time with the defending AL champion Rays defeating the Dodgers. The Rays ride the success behind their pitching staff – which had the AL's best ERA (3.67) and bullpen (3.24) – to overcome the powerful Dodgers.

Brewers over Rays in 6: The midtown Manhattan office won’t be happy (buh-bye ratings). The Rays are the class of the American League and gained valuable postseason experience in 2020. The Brewers have the pitching depth necessary to make a deep run.

Brewers over Rays in 7 : Milwaukee has the arms and manager Craig Counsell has proven adept at pushing the right buttons in the postseason over the past few years. The Brewers are probably the worst matchup possible for the Rays, who will come up short in the World Series for a second year in a row.

This article originally appeared on USA TODAY: MLB playoff predictions: Who will win the 2021 World Series? Our experts have a favorite

Let's face it, the Los Angeles Dodgers were dealt a huge blow on Monday. First it was the loss of Cy Young Award finalist and arguably the best pitcher on the staff last season in Max Scherzer. Scherzer agreed to sign a three-year, $130 million dollar contract with the New York Mets, making him the highest paid player by annual average value in MLB history.
MLB・4 DAYS AGO
The Spun

The Los Angeles Dodgers could be gunning for a significant free-agent move this offseason. According to MLB Network insider Jon Heyman, multiple teams, including the Dodgers, are looking to “pry” superstar first baseman Freddie Freeman away from his World Series-winning Atlanta Braves squad. Yesterday, the Dodgers lost shortstop Corey Seager...
MLB・4 DAYS AGO
Inside The Dodgers

Hall of Fame manager Joe Torre only spent three years at the helm with the Dodgers. In his first season, he was able to manage the team to their first NL Championship Series in 20 years. But apparently, a young lefty named Clayton Kershaw wasn't his biggest fan. Torre said in an interview this week ...
MLB・16 DAYS AGO
Inside The Dodgers

BOSTON — A former Boston Red Sox outfielder known for his spectacular catches but perhaps less than stellar at bats is returning to Fenway Park, the team announced late Wednesday night. The Red Sox announced they had acquired outfielder Jackie Bradley Jr. along with minor league infielders Alex Binelas and...
MLB・2 DAYS AGO
Sportsnaut

With MLB headed for a lockout in the matter of hours, the Boston Red Sox pulled off a surprising deal.
MLB・2 DAYS AGO
Sportsnaut

As the 2021 season concludes, baseball fans and teams are excited for the exciting crop of MLB free agents who
NFL・2 DAYS AGO
WEEI Sports Radio

Coming off a hot season, the Astros were originally favored with a 51% chance to win this year, according to Five Thirty Eight’s MLB predictions, but things changed towards the end of the World Series after losses to the Braves. The Astros initial postseason success was due to a combination of things. The Astros are a homegrown team, meaning many of their players have been drafted and developed or signed overseas. Part of the reason for their success can be attributed to their fantastic scouting department who knows how to evaluate and acquire overseas talent. In addition to this, free agent signings like Michael Brantly and Yuli Gurriel have proven to be extremely beneficial for the team.
MLB・11 DAYS AGO
USA TODAY

Minnie Miñoso belongs in the Baseball Hall of Fame. I should know, I'm his son.

Minnie Miñoso's baseball and immigrant story embodied the American Dream, America’s pastime, and the Chicago White Sox until his last breath.
MLB・10 HOURS AGO
Inside The Dodgers

Corey Seager officially signed with the Texas Rangers on Wednesday. Soon after, AM570's David Vassegh informed listeners that for a while now, he had been holding onto some insider information. Apparently, before the 2021 season began, Seager rejected an eight-year, $250 million contract extension ...
MLB・2 DAYS AGO
Inside The Blue Jays

The Blue Jays reportedly discussed a trade involving Randal Grichuk and Jackie Bradley Jr. with the Milwaukee Brewers, per reports
MLB・1 DAY AGO

USA TODAY Sports takes a look at the winners and losers in the early rounds of a hot stove season that may yet stretch into spring.
MLB・2 DAYS AGO
Sportsnaut

The Tampa Bay Rays on Wednesday made their signing of right-handed starting pitcher Corey Kluber official, announcing a one-year, $8
MLB・2 DAYS AGO
Inside The Dodgers

For the past seven years, Los Angeles has been Corey Seager's home. Now, after signing a huge deal with the Texas Rangers, 10 years $325 million, he's begun a new chapter in his life and will be joining Dodgers' former third-base coach Chris Woodward at Globe Life. With the Rangers signing a number ...
MLB・1 DAY AGO
Inside The Dodgers

Dodgers: Marlins Were in Contact with Kenley Jansen, Says Insider

Max Scherzer, Corey Knebel, and Corey Seager left LA via free agency this week. With such big names already locked up, the Dodgers now have a few key players they really need to focus on. Kenley Jansen, one of those players, is reportedly attracting interest from an old buddy. Dodgers insider David ...
NFL・2 HOURS AGO
Empire Sports Media

The New York Yankee family was saddened to learn of the passing of ex-Yankee manager Bill Virdon. Virdon was manager of the Yankees during 1974 and 1975 before being replaced in 1975 my the new manager Billy Martin. In 1974 he won 89 games for the Yankees. However, Virdon’s claim...
MLB・9 DAYS AGO
WEEI Sports Radio

The Boston Red Sox continued to add to their organizational depth, signing former Detroit first-round pick Christin Stewart to a minor-league deal with an invitation to big-league camp.
MLB・4 DAYS AGO
MassLive.com

There are 1,200 major-leaguers. If you were to rank them all based on the likelihood of the Red Sox acquiring them, Jackie Bradley Jr. might have been right at the bottom of the list. Yet less than 30 minutes before the start of baseball’s first work stoppage in 26 years,...
MLB・2 DAYS AGO