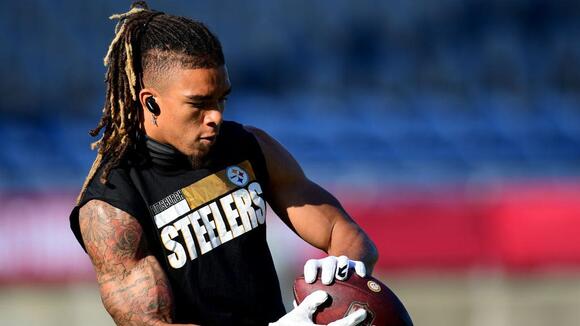 It's kind of hard to believe that the Steelers were 11-0 last year at one point, and the wins didn't just come against pushover teams. They utterly destroyed the Browns in Week 6 by a score of 38-7. They defeated the Titans, Ravens and Cowboys in succession the next three weeks. And it was reason to celebrate for everyone on the team and in the city, which is what Chase Claypool did on social media after their first victory over Baltimore.

To many, this tweet did not exactly age well. Twitter user @GiantsReek, who has just under 200 followers, resurfaced Claypool's tweet following the Steelers' Week 4 loss to the Packers, mentioning that Pittsburgh is 2-8 since the WR's tweet. And it received a whole lot of attention — over 19,000 likes and nearly 2,000 retweets. And Claypool decided to confront all his critics by providing his own perspective on things, one that transcended football and showed us that he still hasn't quite heard of "losing" in life.

"I was the first one in my family to go and finish college," Claypool wrote in the tweet. "I graduated from one of the most prestigious universities in the world. I bought both my parents brand new cars at the age of 21. At the age of 22 I bought my family and I a house.

"Losing? Still never heard of her."

As expected (at least by me), the responses to the post were mixed. Some applauded him for confronting the "trolls" out there and proving that he truly is winning by doing great things in life for himself and others. Some argued that the apparent change in tone from talking about football to talking about life was a little bit inauthentic.

In any event, fans would probably be a lot more agreeable if the Steelers were winning games this year like they were in 2020, but that just isn't the case. Claypool has performed fairly well, though he has yet to haul in a touchdown, and it's hard to say whether or not he'll show too much improvement in his sophomore campaign seeing as the QB play from Ben Roethlisberger looks about as poor as ever to this point in the season.

All that aside, Claypool is currently ranked as the No. 55 WR in terms of his Pro Football Focus grade (66.6), second on the team behind Diontae Johnson (72.4). Hopefully, the passing game will improve and allow Claypool to move back toward — and surpass — what he achieved in his exciting debut campaign.

T.J. Watt, Joe Haden will not play for Steelers, but Chase Claypool to return

Mike Tomlin said he’d “leave the light on” for T.J. Watt. On Friday, though, that switch officially was flipped. Watt will not play for the Pittsburgh Steelers on Sunday night at the Los Angeles Chargers. The star outside linebacker did not practice throughout the week after suffering a hip/knee injury during Sunday’s tie against the Detroit Lions.
NFL・17 DAYS AGO
Larry Brown Sports

The Pittsburgh Steelers were completely embarrassed by the division rival Cincinnati Bengals last Sunday, and Mike Tomlin knows the team needs to make changes going forward. The music situation at practice is not going to be one of them. After Pittsburgh’s 41-10 loss to the Bengals, wide receiver Chase Claypool...
NFL・6 DAYS AGO
USA TODAY Sports Media Group

Pittsburgh Steelers wide receiver Chase Claypool is getting called out for a dangerous face mask play on Sunday afternoon. The Steelers are getting crushed by the Bengals, 41-10, on Sunday afternoon. Late in the contest, Claypool grabbed the facemask of Bengals defensive back Darius Phillips. The play appeared to be...
NFL・8 DAYS AGO

Stephen A. Smith destroys the Steelers: 'You're a national embarrassment'

ESPN’s Stephen A. Smith isn’t impressed with the Pittsburgh Steelers following their 31-point loss to the Cincinnati Bengals. He called them a national embarrassment.
NFL・5 DAYS AGO
ClutchPoints

Pittsburgh Steelers defensive tackle Cam Heyward has no time for nonsense, and he made that extremely clear when he ripped into wide receiver Chase Claypool’s suggestion following the team’s embarrassing 41-10 loss to the Cincinnati Bengals on the road in Week 12. Via Mike Prisuta:. Cam Heyward responded today on...
NFL・6 DAYS AGO
CBS Pittsburgh

By: KDKA-TV News Staff CINCINNATI, Ohio (KDKA) — The Steelers have a lot on the line for this game in Cincinnati, and Steelers fans showed up to cheer them on. During warmups, Claypool went on a break to go to the stands and signed Terrible Towels. He even took a selfie with a fan. WATCH Making time for the fans! @ChaseClaypool taking a break from warmups in Cincinnati to take a selfie and sign some autographs. #HereWeGo @KDKA pic.twitter.com/UZHZgy8IbV — Ian Smith (@ismithKDKA) November 28, 2021 The Steelers face off against the Bengals at Paul Brown Stadium starting at 1 p.m. on KDKA-TV.
NFL・8 DAYS AGO
ClutchPoints

The Pittsburgh Steelers are in shambles right now and desperately need a spark after an embarrassing loss to the Cincinnati Bengals. Enter second-year wideout Chase Claypool, who suggested the team should incorporate some music into practices to lift the tempo and have more fun. Well, that idea was already ripped to shreds by veteran Cam Heyward, who was clearly furious at Claypool’s comments.
NFL・6 DAYS AGO

After a crushing defeat to division foe the Cincinnati Bengals, Mike Tomlin responded to a request from Chase Claypool who wanted to play music during practice. ‘Claypool plays wideout. I’ll let him do that, I’ll formulate the practice.”
NFL・6 DAYS AGO
detroitsportsnation.com

On Monday, Pittsburgh Steelers wide receiver Chase Claypool told the media that he thinks head coach Mike Tomlin should add some music to the team practices to make them more fun and more uptempo. “We have music in the warm ups and that, so it’s fun. People are dancing, having...
NFL・6 DAYS AGO
Steelers Depot

In Week 11 vs. the L.A. Chargers, Chase Claypool returned from a toe injury that forced him to miss Week 10 against The Detroit Lions. One facet of the game in which the Steelers struggled last week (amongst others) was creating and completing chunk gain plays. Against the Chargers, the return of Claypool aided in that regard. On Sunday night, Claypool caught 5 of 9 passes thrown his way for 93 yards, two of which went for 37 and 28 yards, respectively. While the 28-yard gain was a coverage bust/miscommunication, Claypool’s explosiveness after the catch provided some much-needed juice in a high-scoring affair.
NFL・12 DAYS AGO
Steelers Depot

Chase Claypool Understands The Outside Anger, Says ‘We Deserve Criticism’

Though not technically ‘part of the job’ itself, a basic fact of holding a job that takes place within the public sphere is that your work is going to face criticism, both justified and hyperbolic. Athletes playing at the top of their profession are among the most high-profile targets of criticism, which is frequently a mix of the fair and the foul.
NFL・7 DAYS AGO

In a year of inconsistency and uncertainty for the Pittsburgh Steelers, third-year wide receiver Diontae Johnson has stood out in a major way in the black and gold. Johnson, who struggled with drops and overall consistency and focus throughout the 2020 season, has completely flipped the narrative surrounding him as an inconsistent wide receiver who is a boom-or-bust guy into one that is a true, No. 1-type receiver that comes through in the clutch consistently for the Steelers.
NFL・10 DAYS AGO
Yardbarker

Pittsburgh Steelers wide receiver Chase Claypool is dealing with a toe injury that sidelined him in Week 10 and has limited him during practice the last two weeks. Claypool told reporters that he's dealing with "really bad turf toe" that he suffered against the Chicago Bears which is causing him to be limited since the game.
NFL・10 DAYS AGO
Tribune-Review

In a season that has featured more injuries and games missed than touchdown catches, Chase Claypool flashed back to better times last Sunday night when he pulled in a 37-yard reception against the Los Angeles Chargers. “It was like rolling the clock back to last year when we did a...
NFL・9 DAYS AGO
profootballnetwork.com

Never get complacent. Always be looking to improve your fantasy roster. With that in mind, let’s take a look at which fantasy football players are buy-lows and which are sell-highs entering Week 13. *Most leagues have seen their trade deadline come and go already. Going forward, consider this article as...
NFL・7 DAYS AGO
AllSteelers

PITTSBURGH -- Pittsburgh Steelers wide receiver Chase Claypool believes playing music could help improve practice. A center point of the Steelers' struggles this season have revolved around improving practice. After a 41-10 loss to the Cincinnati Bengals, many players mentioned creating a better atmosphere throughout the week, and Claypool believes music could help that effort.
NFL・7 DAYS AGO
FanSided

Pittsburgh Steelers head coach Mike Tomlin shut down a suggestion from wide receiver Chase Claypool about having music at practice. The Steelers know they have to make changes to get out of their current slump, suffering two losses while giving up 41 points each since tying with the Lions. One...
NFL・6 DAYS AGO
Steelers Depot

Chase Claypool: ‘Still Time To Make An Impact’ For Steelers In 2021

Defeatism is normal when it sets in for fans, who often don’t take long before they start talking about ‘tanking’. Their vision is long-term, with the belief that higher draft picks will lead to more talented players that will better serve the team in the long run. Defeatism is devastating...
NFL・5 DAYS AGO
Fox News

Following Pittsburgh’s embarrassing 41-10 loss to the Cincinnati Bengals on Sunday afternoon, Steelers head coach Mike Tomlin addressed wide receiver Chase Claypool’s concerns about practice. Claypool said the 5-5-1 Steelers should try to make practice more "fun" by playing music. "We have music in the warm-ups and that, so it's...
NFL・6 DAYS AGO