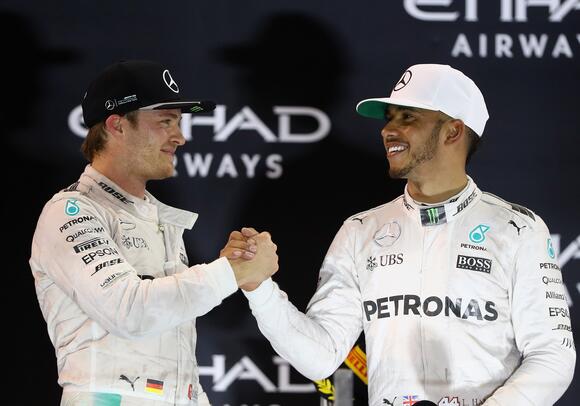 Toto Wolff admits his past experience handling Lewis Hamilton and Nico Rosberg’s rivalry will mean he can “manage much better” the upcoming relationship between the world champion and George Russell .

The Mercedes principal has already confirmed his intention to “condition and calibrate” Russell when he replaces Valtteri Bottas in 2022.

But there are also shades of the internal rivalry between Hamilton and Rosberg from 2013-16.

Russell is just 23 and will bring youth and a fearless attitude in pursuit of victory ahead of Hamilton, with Wolff admitting a title in his first season with the team is possible.

But Wolff also maintains lessons have been learned, while conceding that Hamilton and Rosberg’s relationship was “not managed properly”.

“I think we as a team can manage it much better now than maybe back then, when we slid into the unknown,” Wolff told Motorsport-total.com , reflecting on the last couple of years before Rosberg retired as World Champion at the end of 2016.

“The dynamic between George and Lewis will be completely different. You’ve got the wizard and the sorcerer’s apprentice and I think they are both aware of that division of roles.

“I have to put that on myself. But I was quite virginal in the role then. It’s different today. I didn’t know the past of the two drivers and maybe with the team then I didn’t react robustly enough to avoid these things.

“But Nico was also in a completely different situation to George. Nico was in the middle of his career, had been with Mercedes for six years in 2016, came earlier [to Mercedes] than Lewis. That’s why the dynamic was different.

“With Lewis, we have a driver who has now been at Mercedes for eight years, has a great career and is still in the middle of setting more records. And on the other hand, we have a young, up-and-coming talent who keeps putting in extraordinary performances like at Sochi and Spa in the rain.”

The challenge faced by Lewis Hamilton in Brazil triggered a reaction that allows him to ruthlessly perform at a higher level, according to Mercedes team principal Toto Wolff. Hamilton set the fastest time in qualifying at Interlagos but was later disqualified when his car failed scrutineering due to a failed part of the rear wing. With Max Verstappen therefore starting first, Hamilton faced a tough task from the back of the grid but rose to fifth in the Sprint before winning the grand prix itself from 10th, backing that up with pole and victory in Qatar to reduce Verstappen’s championship lead to eight points.
MOTORSPORTS・6 DAYS AGO
Daily Mail

Max Verstappen ended an explosive day in the title battle against Lewis Hamilton narrowly quicker than his rival in Friday practice at the Qatar Grand Prix. Verstappen came into the weekend subject to a Mercedes review request regarding his defensive driving against Hamilton at the Sao Paulo Grand Prix last time out.
MOTORSPORTS・10 DAYS AGO
thedrive

How Lewis Hamilton Came From the Back to Win In Brazil

No, he wasn't "cheating." He's just that good. The grid is buzzing. All 20 Formula One cars are lining up on the grid for Saturday's sprint qualifying for the 2021 Brazilian Grand Prix. There's a long wait—the last driver is taking their sweet time, letting the frontrunners' tires get cold. The driver in 20th place is—record scratch—Lewis Hamilton. You're probably wondering how he got there.
MOTORSPORTS・13 DAYS AGO
The Guardian

Formula One: is Lewis Hamilton the man to beat again?

With six winners from four different teams so far, and the World Championship on a knife edge between Max Verstappen and Lewis Hamilton, 2021 is set to go down in history as a classic season. True to form, yesterday’s Brazilian Grand Prix didn’t disappoint, and one has to hand it to Lewis and Mercedes for a job well done.
MOTORSPORTS・14 DAYS AGO
Reuters

Hamilton and Verstappen take a step into the unknown

Nov 17 (Reuters) - Lewis Hamilton and Max Verstappen take their title battle into the unknown this weekend as Qatar hosts a Formula One grand prix for the first time at a track better known for two-wheeled thrills. The last of three races on successive weekends from Mexico via Brazil,...
MOTORSPORTS・12 DAYS AGO
ClutchPoints

F1 and Mercedes boss Toto Wolff is hyped after Lewis Hamilton and Mercedes’ victory in Brazil, stressing that the motivation within the team is “greater than ever.”. Despite missing out on pole position, and with Hamilton starting the race from P10, Mercedes’ completely outlasted Red Bull in Brazil, with Hamilton winning the race and Valtteri Bottas finishing at P3.
MOTORSPORTS・12 DAYS AGO
The Independent

Toto Wolff hailed Lewis Hamilton’s “superhero powers” after the reigning world champion steered his Mercedes to a masterful victory at the Qatar Grand Prix.Hamilton led from lights to flag at the Losail International Circuit to beat Max Verstappen into second place and move to within eight points of his main title rival.There are just two races remaining – a debut in Saudi Arabia and a return to Abu Dhabi – and Hamilton has now taken victory in Brazil and here at the inaugural race in Doha to build momentum.Caption this. 😂 pic.twitter.com/qcTL9wKvRJ— Mercedes-AMG PETRONAS F1 Team (@MercedesAMGF1) November 21, 2021The...
MOTORSPORTS・8 DAYS AGO

Mercedes team principal Toto Wolff admits he was unsurprised to see a right for review against Max Verstappen denied as the most thrilling Formula One title fight in years spilled over into a war of words with Red Bull boss Christian Horner Lewis Hamilton took the chequered flag at the Brazilian Grand Prix last weekend to close the gap in the drivers’ championship to 14 points with three races remaining.But Verstappen escaped punishment for running his rival off the road as they duelled for first position on lap 48.BREAKING: Stewards reject Mercedes appeal into incident between Hamilton and Verstappen in...
MOTORSPORTS・10 DAYS AGO
The Independent

Lewis Hamilton took a commanding pole position at the first ever Qatar Grand Prix after working long into the night to get the upper hand in his quest to get the better of Max Verstappen and lift an eighth Formula One world title.The reigning champion is currently 14 points behind the Dutchman in the drivers’ championship but won in Brazil last weekend and had the beating of the Red Bull around the Lusail International Circuit.With Mercedes showing their pace advantage in Saturday’s final practice session, Hamilton would storm to pole under the lights in Doha with a time of one...
MOTORSPORTS・9 DAYS AGO
BBC

Lewis Hamilton set a blistering pace to take pole position for the Qatar Grand Prix by nearly half a second. Red Bull's Max Verstappen, 14 points ahead of Hamilton in the title race, was 0.455 seconds behind in second. Hamilton's team-mate Valtteri Bottas was third, 0.196secs behind Verstappen with Alpha...
MOTORSPORTS・9 DAYS AGO
ESPN

LOSAIL, Qatar — The most dramatic Formula One title feud in at least a decade further intensified Friday when Christian Horner and Toto Wolff traded barbs at the same time the FIA denied Mercedes’ right to appeal last week’s non-penalty on F1 championship leader Max Verstappen. Wolff, the head of...
MOTORSPORTS・10 DAYS AGO
ESPN

LUSAIL, Qatar -- Formula One's title battle spilled off the track and into the news conference room on Friday at the Qatar Grand Prix, as rival team principals Toto Wolff (Mercedes) and Christian Horner (Red Bull) were pitched against each other in a war of words ahead of this weekend's race.
MOTORSPORTS・10 DAYS AGO
The Independent

Lewis Hamilton will have his newest engine back in place for the Saudi Arabia Grand Prix as Mercedes look to launch a late assault to retain the Formula One drivers’ championship title.The British racer closed the gap on leader Max Verstappen by winning the Qatar Grand Prix on Sunday, with the Dutchman just eight points ahead with two races to go.Hamilton, the reigning champion, can again emerge triumphant for 2021 if he wins the last two events of the season - and he’ll have the machinery from his successful Brazilian Grand Prix back in his car next time out.The improvements...
MOTORSPORTS・7 DAYS AGO
thefocus.news

It was a mixed weekend for Toto Wolff at the Sao Paulo Grand Prix, although he ended it by becoming just the latest F1 Twitter meme. Here’s a look at some of the best F1 fans have come up with. Despite Lewis Hamilton having a searing pace advantage over the...
MOTORSPORTS・15 DAYS AGO
The Independent

Follow all the latest Formula One news with Max Verstappen anxiously waiting to see if he will be punished for the incident involving Lewis Hamilton at the Brazilian Grand Prix.The seven-time world champion won Sunday’s race in fine style following a superb comeback drive, but championship leader Verstappen escaped punishment for running his rival off the road as they battled for first position late in the race.The stewards noted the incident before looking at the footage and choosing not to launch a formal investigation, a decision Mercedes chief Toto Wolff later called “laughable”. However, Mercedes have since been granted...
MOTORSPORTS・11 DAYS AGO
punditarena.com

Mercedes to bring out “spicy equipment”. With only two races left in this year’s championship, Toto Wolff is willing to pull out all the stops. With Saudi Arabia expected to be a promising track for Mercedes and Lewis Hamilton, Wolff claims that pulling out the “spicy” equipment for both Hamilton and Valterri Bottas.
MOTORSPORTS・7 DAYS AGO
ClutchPoints

After numerous jabs from the stewards at Mercedes this F1 weekend, team boss Toto Wolff says that ‘diplomacy has ended’ despite managing to pull off a massive result at the Brazilian Grand Prix. The first incident came at the expense of Lewis Hamilton’s exceptional qualifying performance. Hamilton violated F1 DRS...
MOTORSPORTS・13 DAYS AGO
ClutchPoints

Red Bull boss Christian Horner drops a massive truth bomb on his relationship with an F1 rival, Mercedes’ Toto Wolff. This F1 season has witnessed a refined and intense rivalry between Max Verstappen and Lewis Hamilton, as both have been battling it out to win the driver’s championship. Apart from...
MOTORSPORTS・10 DAYS AGO