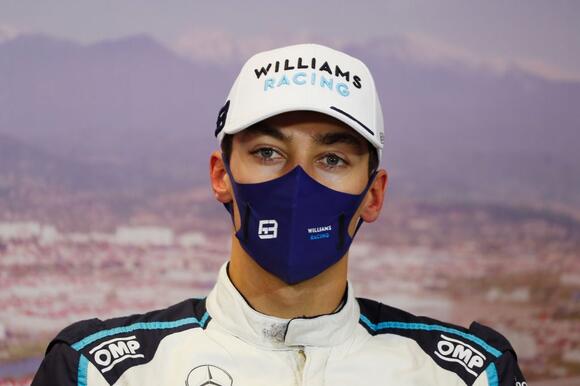 There are still seven rounds to go in the 2021 Formula 1 season, but Mercedes boss Toto Wolff is already looking ahead to next year and the new partnership between Sir Lewis Hamilton and George Russell .

While the former is the reigning champion and top of the current drivers’ standings, the latter is still with Williams ahead of a switch at the end of the season, at which time he will replace Valtteri Bottas as Hamilton’s team-mate .

Russell has earned 16 points this season including a podium finish at both the Belgian and Russian Grand Prix, and Wolff feels his talents mean he’s capable of delivering an early charge to win the title, even ahead of Hamilton.

“[He has to first] consolidate the proof he can deliver top performances like in Bahrain 2020 on a regular basis to qualify for a championship,” Wolff said.

“That could also happen in the first year and would be a luxury problem that we would then have to solve.”

With Hamilton being such a legendary figure in the sport having clocked up 100 career wins recently , Wolff likened their potential relationship to that of a “wizard and sorcerer’s apprentice”.

Speaking earlier this year, Russell had claimed he feels “ready to fight for World Championships and win races”, proclaiming that once he joins Mercedes he will “be giving it everything I’ve got”.

Before the Brazilian Grand Prix, there were many race fans who ruled out Mercedes and their ace driver Lewis Hamilton out of the championship race. Yet with the Brackley based team making a comeback with both their drivers registering podium finishes, George Russell feels that it is absolutely stupid to write off his future team and teammate just yet ahead of the start of the 3 Middle-Eastern races.
MOTORSPORTS・9 DAYS AGO
ClutchPoints

F1 rising star George Russell makes a wild response to those betting against Lewis Hamilton amid his intense title race with Max Verstappen. Hamilton put on a masterclass in Brazil, garnering another race win after starting from P10 due to his fresh engine’s penalty. Despite Verstappen’s start from P2 and Mercedes teammate Valtteri Bottas’ pole position, Hamilton managed to rise above all with the odds stacked up against him.
MOTORSPORTS・10 DAYS AGO
racingnews365.com

Wolff warns: Mercedes' motivation is greater than ever

Toto Wolff says the setbacks faced by Mercedes in Brazil have only served as a driving force in their fight against Red Bull. Toto Wolff has proclaimed that the motivation within the Mercedes team is "greater than ever" after they recovered from a number of setbacks to win the Brazilian Grand Prix with Lewis Hamilton.
MOTORSPORTS・11 DAYS AGO
ESPN

Mercedes team boss Toto Wolff believes the technical infringement that saw Lewis Hamilton disqualified from the qualifying results at the Sao Paulo Grand Prix should not have been investigated by the stewards and has accused the FIA of breaking its own "modus operandi". Hamilton was excluded from Friday's results and...
MOTORSPORTS・14 DAYS AGO

An animated Wolff clenched his fists in celebration and then pointed in the direction of the world-feed camera positioned in Mercedes' garage when Hamilton crossed the line to claim a crucial win ahead of title rival Max Verstappen from 10th on the grid, at the end of dramatic weekend of investigations and penalties at Interlagos.
MOTORSPORTS・14 DAYS AGO
f1i.com

Mercedes has 'a good package' and everything to play for – Wolff

Mercedes boss Toto Wolff says his team's performance in Saturday's sprint race shows that it has a fast car and a "good package" for Sunday's event. Valtteri Bottas took a lights-to-flag win at Interlagos in yesterday's 24-lap sprint, overhauling Red Bull's Max Verstappen at the start and never looking back.
MOTORSPORTS・14 DAYS AGO
The Independent

Mercedes team principal Toto Wolff admits he was unsurprised to see a right for review against Max Verstappen denied as the most thrilling Formula One title fight in years spilled over into a war of words with Red Bull boss Christian Horner Lewis Hamilton took the chequered flag at the Brazilian Grand Prix last weekend to close the gap in the drivers’ championship to 14 points with three races remaining.But Verstappen escaped punishment for running his rival off the road as they duelled for first position on lap 48.BREAKING: Stewards reject Mercedes appeal into incident between Hamilton and Verstappen in...
MOTORSPORTS・9 DAYS AGO
NBC Sports

LOSAIL, Qatar — The most dramatic Formula One title feud in at least a decade further intensified Friday when Christian Horner and Toto Wolff traded barbs at the same time the FIA denied Mercedes’ right to appeal last week’s non-penalty on F1 championship leader Max Verstappen. Wolff, the head of...
MOTORSPORTS・9 DAYS AGO

After numerous jabs from the stewards at Mercedes this F1 weekend, team boss Toto Wolff says that ‘diplomacy has ended’ despite managing to pull off a massive result at the Brazilian Grand Prix. The first incident came at the expense of Lewis Hamilton’s exceptional qualifying performance. Hamilton violated F1 DRS...
MOTORSPORTS・12 DAYS AGO
The Guardian

Toto Wolff described Lewis Hamilton’s victory as one of his ‘best ever’ but hit out at ‘laughable’ decisions he believes Mercedes suffered in Brazil
MOTORSPORTS・13 DAYS AGO
racer.com

Red Bull team principal Christian Horner voiced further doubts about the legality of the Mercedes car while stating he has no relationship with Toto Wolff ahead of the Qatar Grand Prix. The two teams have been fighting for both championships all season long, with Max Verstappen currently leading Lewis Hamilton...
MOTORSPORTS・9 DAYS AGO
ESPN

“Are we in kindergarden or are we racing?” Helmut Marko lashes out at Toto Wolff

When Lewis Hamilton was handed penalties one after the other ahead of the race on Sunday, few expected him to win the race. However improving performances, session after session ensured that the seven-time world champion wins one of his greatest ever races against Max Verstappen. After the result Mercedes boss Toto Wolff was unable to hide his frustration with the race stewards for the same. Which is surely not digested well by Helmut Marko.
MOTORSPORTS・13 DAYS AGO
blackchronicle.com

LUSAIL, Qatar — Formula One’s title battle spilled off the track and into the news conference room on Friday at the Qatar Grand Prix, as rival team principals Toto Wolff (Mercedes) and Christian Horner (Red Bull) were pitched against each other in a war of words ahead of this weekend’s race.
MOTORSPORTS・8 DAYS AGO
Motorsport.com

Wolff: F1 right of review not about punishing Verstappen

The world champion squad wanted the FIA to reconsider its decision not to investigate Verstappen for pushing Hamilton wide at they battled for the lead at Interlagos last weekend. However, despite submitting fresh evidence including the forward facing onboard footage from Verstappen's car, the FIA rejected Mercedes's case. Speaking before...
MOTORSPORTS・9 DAYS AGO
thefocus.news

It was a mixed weekend for Toto Wolff at the Sao Paulo Grand Prix, although he ended it by becoming just the latest F1 Twitter meme. Here’s a look at some of the best F1 fans have come up with. Despite Lewis Hamilton having a searing pace advantage over the...
MOTORSPORTS・13 DAYS AGO
punditarena.com

Mercedes to bring out “spicy equipment”. With only two races left in this year’s championship, Toto Wolff is willing to pull out all the stops. With Saudi Arabia expected to be a promising track for Mercedes and Lewis Hamilton, Wolff claims that pulling out the “spicy” equipment for both Hamilton and Valterri Bottas.
MOTORSPORTS・6 DAYS AGO
SkySports

Hamilton's car was eventually excluded from the results of Friday night's qualifying session, when he had impressively set the pace, for a DRS wing infringement on his Mercedes car. He ultimately made light of that setback by surging from 20th to fifth place in Saturday evening's sprint race. Sunday's Grand...
MOTORSPORTS・14 DAYS AGO
Insider

Lewis Hamilton has gone from seemingly without a hope to the man in pole position to secure this season's drivers world championship.
MERCEDES, TX・6 DAYS AGO
ClutchPoints

Red Bull boss Christian Horner drops a massive truth bomb on his relationship with an F1 rival, Mercedes’ Toto Wolff. This F1 season has witnessed a refined and intense rivalry between Max Verstappen and Lewis Hamilton, as both have been battling it out to win the driver’s championship. Apart from...
MOTORSPORTS・8 DAYS AGO