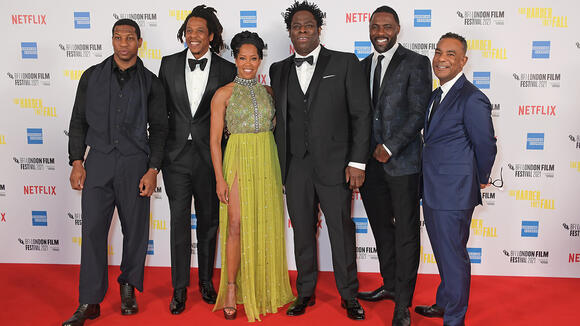 After a pandemic-impacted year where the BFI London Film Festival was, like so many others, forced to scale back much of its offerings with very limited in-person events and almost zero international guests, Wednesday night saw the U.K.’s biggest cinema event roar back to life.

The Royal Festival Hall, on the banks of the River Thames and a new setting after the festival shifted from its traditional base in Leicester Square, was the location for the grand 2021 revival and where Regina King , Idris Elba , Jonathan Majors , Regé-Jean Page, Ted Sarandos, Jay-Z and, according to reports (she ducked the photographers), Beyoncé, were among the major names in attendance for the opening night world premiere of Netflix ’s all-star, all-Black Western The Harder They Fall .

Following a week of rain, the weather also seemed to be on LFF’s side, with the red carpet remaining dry and guests able to enjoy a rare spot of October sunshine. And while the Royal Festival Hall was at full capacity for the screening, organizers were still trying to keep in line with the times, all guests asked in advance to report a recent negative COVID-19 test and encouraged to keep their masks on throughout (although few were seen wearing them). A sizable party — something else that has been in short supply at film festivals over the last 18 months — followed at London’s Freemasons’ Hall.

The Harder They Fall — a fast-paced and bloody revenge thriller from first time director Jeymes Samuel (better known as singer-songwriter The Bullitts) — sees King, Elba and Majors appear alongside Zazie Beetz, Delroy Lindo and LaKeith Stanfield. And while the latter three may not have made the trip to London, other names expected to appear at the festival over the course of the next 11 days include the likes of Kristen Stewart for Spencer , Benedict Cumberbatch, Kirsten Dunst and Jesse Plemons for The Power of the Dog , Maggie Gyllenhaal and Olivia Colman for The Lost Daughter , Joel Coen and Frances McDormand for The Tragedy of Macbeth , and Kenneth Branagh and Judi Dench for Belfast .

Although a Western might not seem like a traditional curtain-raiser for a British festival, it was the perfect choice for director Samuel, a Londoner raised on Harrow Road in the north-west of the capital. Speaking at a press conference earlier in the day , the musician and filmmaker joked that he had previously gatecrashed the London Film Festival on several occasions.

“I’ve snuck into LFF so many times,” he said. “So to be here with my debut film is poetic in so many ways.”

Speaking on stage, Jay-Z — who produced the film — said that “to be releasing in London, where he’s from, has to be a dream.”

Much noise was made on the night about The Harder We Fall ‘s all-Black cast, something not seen previously in Westerns. All the characters in the film were actual real-life people from the Wild West, Samuel claimed, and while the story itself may be fictitious he said he wanted to “assemble them like The Avengers.”

Elba, who has known Samuel for 15 years, said he believed The Harder They Fall was a “revolutionary” movie. “It’s very hard to redefine a genre, but I think James has done it.”

Jane Campion-directed Western The Power of the Dog, the second season of fantasy drama The Witcher and climate disaster satire Don’t Look Up are among the most anticipated titles hitting Netflix in December. Based on the 1967 novel of the same name, The Power of the Dog drops on Dec. 1 and stars Benedict Cumberbatch as Phil, one half of a wealthy ranch-owning duo, who hates Kirsten Dunst’s Rose as quickly as his brother George (Jesse Plemons) is taken with her. As Rose and her son, Peter, attempt to make a home for themselves on the ranch, Phil is unrelenting in...
TV SERIES・2 DAYS AGO
The Hollywood Reporter

Costume designer Antoinette Messam doesn’t just dress A-list stars in Hollywood movies. Prior to costuming director Jeymes Samuel’s revisionist Western The Harder They Fall, Messam worked as a stylist and designer in the fashion industry. That experience allowed her to bring a modernized touch to the traditional cowboy silhouette in the film. Born in Jamaica to a fashion-focused family — her father was a tailor, and her mother was a dressmaker — Messam was always drawn to the magic of costumes in movies. “I always had a love of the escape,” she says of her love for cinema. “I think that’s...
DESIGNERS & COLLECTIONS・8 DAYS AGO
The Hollywood Reporter

Take a look at the new Netflix movie offerings for these first two weeks of November 2021, and you'll notice some patterns. With the holidays closing in and the end of the year approaching, there are plenty of new holiday movies and Oscar hopefuls to be found on the service. But that's not all that's just landed. In addition to a fairytale-like Santa origin story, a critically acclaimed period drama, and a new Western packed with movie stars, you'll also find some returning old favorites. So read on to see our picks for what movies to catch on Netflix this weekend.
MOVIES・23 DAYS AGO

A frightening twist. Idris Elba believed he had genuinely been shot by costar Denzel Washington while working on Ridley Scott‘s American Gangster. The director, 83, recently reflected on the 2007 mafia movie, remembering a scene where Frank Lucas (Washington) pulls a gun on Tango (Elba). During an interview with the Daily Mail published on Wednesday, November 24, Scott recalled telling the Wire alum, 49, to lean his head directly on the barrel of the prop gun, which didn’t have blanks or bullets loaded into it.
MOVIES・9 DAYS AGO
rolling out

The race to find the next James Bond is on, and it looks like there are some serious contenders on the growing list. While Idris Elba seems to be a fan favorite suggestion for the role, he has said it is definitely not going to be him. While that may not be what fans want to hear, there may be a consolation prize. Apparently, the Luther star could reportedly appear in the next 007 film in a completely different way.
MOVIES・7 DAYS AGO
The Fordham Observer

‘The Harder They Fall’: An Original Take on the Western Genre

In “The Harder They Fall,” which was released on Netflix on Nov. 3, director Jeymes Samuel adds some much-needed originality and energy to the Western genre, offering an entirely different viewing experience of the Wild West. Noticeable from the start is that all of the main characters are Black, a...
TV SHOWS・6 DAYS AGO

After being delayed a year due to the pandemic, Steven Spielberg’s highly anticipated musical remake of the best picture winner “West Side Story” had its first screenings this week before critics, journalists and varying awards and guild voters. The social media reaction has been loud and palpable throughout the Oscar chamber, which could bring about a late December entry run for the best picture prize, which would be the first since Guillermo del Toro’s “The Shape of Water” (2017) and Clint Eastwood’s “Million Dollar Baby” (2004).
MOVIES・4 DAYS AGO
GMA

From Idris Elba's tribute to Virgil Abloh to Billy Porter's grand red carpet entrance, check out some of the top moments from the 2021 Fashion Awards.
BEAUTY & FASHION・5 DAYS AGO
Variety

A24 and Apple Original Films play double duty on the William Shakespeare adaptation of “The Tragedy of Macbeth” from Joel Coen. With A24’s awards website launching, their entire roster is listed for industry guilds and voters to consider this awards season. The studio that brought Barry Jenkins’ “Moonlight” to a best picture win and made Yuh-Jung Youn the second Asian woman to win an acting Oscar last year with “Minari” has another potentially historic event on the awards horizon. At last year’s 93rd Oscar ceremony, Frances McDormand became the first woman to be nominated for acting and producing in the same...
MOVIES・20 DAYS AGO
Popculture

Idris Elba Thought He Was Shot When Making 'American Gangster'

Director Ridley Scott contrived to have Idris Elba think he'd really been shot while filming American Gangster in 2007. In a new interview with The Daily Mail, Scott described how he scared Elba to get an "authentic" reaction for the scene. The story was eerily relevant following the recent discussion of gun safety on film sets.
MOVIES・11 DAYS AGO

It was commonly believed that Idris Elba would eventually take over as 007 after years of pleas from fans everywhere, finally giving us the first Black Bond that everyone’s always saw in him. With Daniel Craig bowing out as lead after No Time To Die, all eyes were on Elba...
CELEBRITIES・12 DAYS AGO
The Independent

Ridley Scott has recalled the time actor Idris Elba thought he’d genuinely been shot on the set of his film American Gangster.Elba played a dealer called Tango in the 2007 movie, alongside Denzel Washington and Russell Crowe.Scott told MailOnline that the weapon used on the set had a solid filled-in barrel, with no bullets or blanks in it, for the scene where Frank Lucas, a mob boss’s right-hand man played by Washington, puts a gun against the forehead of Elba’s character Tango.The director had asked Elba to lean against the gun so that the recoil would provoke a physical...
CELEBRITIES・10 DAYS AGO
darkhorizons.com

Review: “The Harder They Fall”

Regina King, Delroy Lindo, Idris Elba and Jonathan Majors are dripping with swag and swagger in the same western? Sign me up for “The Harder They Fall” – a stylish, hip hop infused, revisionist yet classical collision course tale of revenge on the American Frontier. “The Harder They Fall” is...
MOVIES・7 DAYS AGO
E! News

Watch: Helen Mirren Talks "Solos" & Getting Into TikTok. From Queen Elizabeth II to Catherine the Great, Helen Mirren has played many powerful historical women. So it only makes sense that the 76-year-old actress has been cast in the role of Israeli Prime Minister Golda Meir, the only woman to ever hold the office. The movie will follow Meir as she works with the all-male Cabinet during the Yom Kippur War of 1973.
WORLD・4 DAYS AGO
studybreaks.com

Jeymes Samuel may have revived the genre with his new revenge-driven, fictional Black Western. Spoilers for “The Harder They Fall” ahead. A man, his wife and their young son gather around a dinner table to eat. Before they get a chance to pray over their food, there’s a firm knock on the door. The man of the house makes his way to the front door and opens it. Before him stands a man whose face is covered by his large brim hat. Without an invitation, the mysterious man pushes his way through the door and takes a seat at the table.
MOVIES・2 DAYS AGO
TheWrap

Jeymes Samuel, Idris Elba, Jonathan Majors and more discuss the making of the film in a 12-minute roundtable. The Netflix Western “The Harder They Fall” is an exceptional accomplishment – a western that in some ways feels very traditional (it’s a story of revenge, with characters taken from actual history) while simultaneously feeling downright revolutionary (thanks mostly to its all-Black cast, use of nontraditional music, and the exuberant creativity of co-writer/director Jeymes Samuel).
MOVIES・3 DAYS AGO