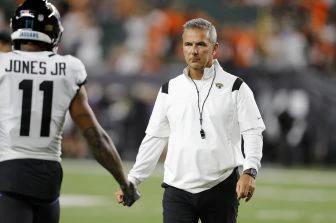 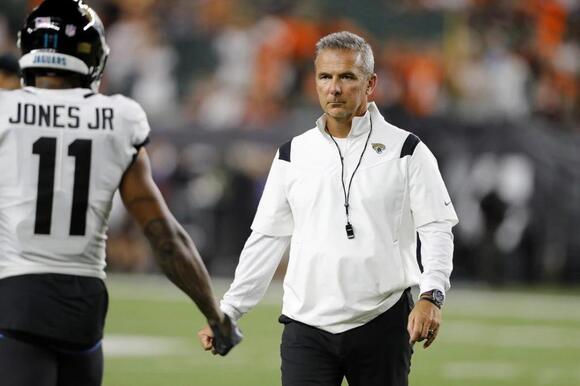 Jacksonville Jaguars coach Urban Meyer continued his rounds of apologies on Wednesday, this time addressing his team about his behavior in Ohio last week.

NFL Network characterized Meyer as “honest and pretty forthright” as he talked to the players, adding he “expressed remorse and asked for forgiveness.”

Meyer has been under fire since a video emerged on Saturday that showed him at a bar he owns in Columbus with a young woman dancing close to him. A second video emerged Monday, taken from another angle, that appeared to show Meyer touching the woman’s bottom.

He told reporters at a news conference Wednesday that while owner Shad Khan has expressed disappointment, Meyer has not been fined. The embattled first-year coach also said he hasn’t considered resigning. 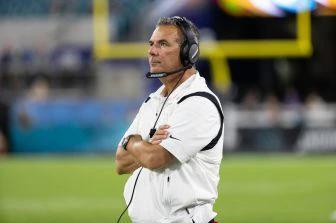 Also Read:
3 reasons why Urban Meyer should be fired by the Jacksonville Jaguars

Meyer and his wife, Shelley, have been married since 1986 and have three children. The woman in the video has not been identified but was not Shelley Meyer.

The NFL Network report said Meyer told the team he “cares about two things, really. Football and family, and he embarrassed them both.”

Meyer, 57, discussed the fallout Tuesday night on his radio show on station 1010XL in Jacksonville.

“I made a comment when I got here about the logo, about an owner who wants to win in the worst way,” Meyer said. “That’s one of the reasons I came here. I just, I admire that guy so much. … And so, that’s what makes me so angry at myself that I lived that, I believe that and I failed.”

He said the conversations he’s been forced to hold this week with members of the organizations have been “horrible.”

“The fact that I became a distraction, I’ve got to earn their trust back from that,” Meyer said.

On Tuesday, Khan said Meyer must do just that. 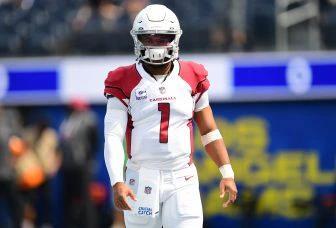 “I have addressed this matter with Urban,” Khan wrote in a statement. “… His conduct last weekend was inexcusable. I appreciate Urban’s remorse, which I believe is sincere. Now, he must regain our trust and respect. That will require a personal commitment from Urban to everyone who supports, represents or plays for our team. I am confident he will deliver.”

Meyer is in his first year with the Jaguars after leading Florida and Ohio State to three national titles.

The Jaguars are 0-4 and have lost 19 consecutive games dating back to their victory over the Indianapolis Colts in the 2020 season opener. Jacksonville squandered a 14-point halftime lead last Thursday and lost a 24-21 heartbreaker to the Cincinnati Bengals.

Meyer also has been criticized for not accompanying his young team back to Florida and instead remaining in Ohio to visit with his grandchildren.

He told reporters Wednesday that he got the OK from general manager Trent Baalke to stay in Ohio.

The Miami Dolphins announced a plethora of moves this Wednesday involving both their 53-man roster and practice squad. For starters, the Dolphins signed cornerback Jamal Perry to their active roster. He has been elevated from the practice squad three times this season, making two specials team tackles in those appearances.
NFL・17 DAYS AGO
detroitsportsnation.com

With news breaking that Brian Kelly has left Notre Dame to become the head coach at LSU, you knew it was just a matter of time before Urban Meyer, who has been linked to the Irish in the past, would once again be mentioned as a potential candidate. Well, according...
COLLEGE SPORTS・4 DAYS AGO
The Spun

LSU confirmed on Tuesday morning that Brian Kelly will depart Notre Dame and take over as the new head coach of the Tigers. In doing so, the 60-year-old will leave behind the latest high-profile vacancy during this year’s hectic hiring cycle. Already, one name has started to pop up in...
COLLEGE SPORTS・4 DAYS AGO

Urban Meyer is more interested in rebuilding the Jacksonville Jaguars than coaching at Notre Dame. Jacksonville Jaguars head coach Urban Meyer reportedly has no interest in taking over at Notre Dame. The three-time national championship-winning head coach served as an assistant under Lou Holtz from 1996-2000 before getting the Bowling...
NFL・4 DAYS AGO
saturdaydownsouth.com

Urban Meyer makes decision on his future, per report

Urban Meyer is the head coach of the Jacksonville Jaguars, and things aren’t going well for him in Year 1. The Jaguars are currently 2-9. If not for the disastrous season the Detroit Lions are having, Jacksonville would have the worst record in the NFL. But, according to a report...
NFL・4 DAYS AGO
FanSided

Even since Urban Meyer became the head coach of the Jacksonville Jaguars, there’s been speculation about whether he would be one-and-done in the NFL. So far, he’s stayed put but one high-profile job he may be interested in just became available. Notre Dame has a head coaching vacancy after Brian...
NFL・4 DAYS AGO
Big Cat Country

Wellhouse Company is proud to help Big Cat Country deliver Keep Choppin’ Wood to your inbox—you can sign up for the newsletter here. We’re a local, independent insurance agency right here in Duval providing everything from homeowners policies to risk management services that help you grow your business. Bang it...
NFL・4 DAYS AGO

December is here, a time for celebration and feeling good, so let's get the picks back on track. Make it a December to remember. Wait, I've heard that before. Anyway, the picks weren't great last week. I went 7-8 against the spread, 9-6 straight up and 3-3 with my Best Bets as part of the Pick Six Podcast.
NFL・3 DAYS AGO
FanSided

Those that thought the Jacksonville Jaguars would beat the San Francisco 49ers had their hopes shattered after losing 30-10. This was arguably the Jags’ worst loss of the season, as they were outmatched in all three phases of the game. And a report early Sunday should have been a sign of things to come.
NFL・12 DAYS AGO
The Falcoholic

What if the Falcons win/lose against the Jacksonville Jaguars

The Atlanta Falcons have scored a grand total of three combined points in their past two games. In what has become an offense happy, passing-first league, that’s an insanely difficult feat for any team to accomplish. Fresh off of their embarrassment at the hands of the New England Patriots on...
NFL・7 DAYS AGO
profootballnetwork.com

This Sunday’s Atlanta Falcons vs. Jacksonville Jaguars matchup is a tough one to make a prediction for with both franchises struggling for consistency in recent weeks. Let’s take a look at the top storylines for Falcons at Jaguars, examine the current NFL odds, and make a prediction for this game.
NFL・6 DAYS AGO

Urban Meyer sees positives, but identity in passing game ‘still not there’

JACKSONVILLE, Fla. – Urban Meyer saw plenty of good in another loss, but the Jaguars still can’t put things together for a full game. The recurring theme — what is wrong with Jacksonville’s passing game, and can it be fixed this season?. The short answer is probably not. Jacksonville is...
NFL・5 DAYS AGO
saturdaytradition.com

With college jobs coming open at a dizzying rate right now, everyone is getting linked to everything. With Notre Dame officially on the hunt for a new head coach, Urban Meyer’s name has been tossed around as a potential option. Citing sources, the Associated Press reported Tuesday that Meyer has no interest in coming back to coach college football.
NOTRE DAME, IN・4 DAYS AGO
RealGM

Urban Meyer Has No Interest In Leaving Jaguars For College Job

Urban Meyer has no interest in leaving the Jacksonville Jaguars to take another head coaching job in college. Meyer does not want to reenter the college ranks at this point in his life after leaving Ohio State in 2018. Meyer's name has been linked to the opening at Notre Dame,...
COLLEGE SPORTS・4 DAYS AGO
New York Post

Urban Meyer says he will not be Notre Dame’s next head coach. The Jacksonville Jaguars coach flatly squashed any speculation about his immediate future when asked by The Associated Press on Tuesday about the vacancy at Notre Dame created by Brian Kelly’s abrupt departure for LSU. “I’m not a candidate,”...
NOTRE DAME, IN・4 DAYS AGO

There has been chatter about Urban Meyer leaving the Jacksonville Jaguars for Notre Dame but the head coach has made it be known he isn’t leaving Duval. Meyer’s name has popped up whenever a big-profile job at the collegiate level has become available, and it was no different when Brian Kelly left Notre Dame for LSU. In fact, if there was an opening Meyer would have considered, it was the one in South Bend, as it was his dream job. However, he’s not leaving the Jags now nor anytime soon.
NFL・4 DAYS AGO
Big Cat Country

Urban Meyer is dedicated to the Jaguars, according to reports from ESPN’s Mike DiRocco and the Associated Press’ Mark Long, both releasing reports via sources that indicated the Jaguars’ head coach will not be leaving the Jaguars to re-join the collegiate ranks. Speculation revolving around Meyer’s potential move heat up...
NFL・4 DAYS AGO
Yardbarker

Urban Meyer has once again found himself at the center of the college coaching rumor mill, but apparently the Jacksonville Jaguars do not need to be concerned. Meyer has no interest in taking another college coach job, ESPN’s Michael DiRocco reports. The 57-year-old remains committed to the Jaguars and trying to build them into a contender.
NFL・4 DAYS AGO
FanSided

Urban Meyer expected Jaguars to be cleaner by now

If you thought the Jacksonville Jaguars would be better after undergoing a makeover this past offseason, you aren’t alone. Head coach Urban Meyer told the local media Wednesday he expected a “cleaner team” by now, especially on offense. On the other hand, he said he knew what he was getting into.
NFL・2 DAYS AGO