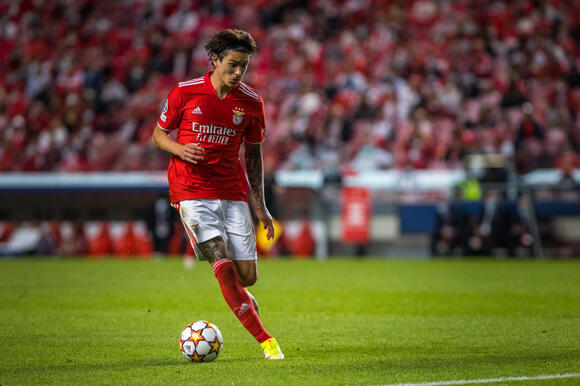 Despite having a wealth of talent in midfield, the Premier League champions are seeking to compete on all fronts without a recognised striker in their ranks following Sergio Aguero's move to Barcelona in the summer.

Following their failed pursuit of Tottenham forward Harry Kane, City could still be in the market for a striker in the January transfer window, or decide to hold out until next summer to acquire a world-class centre-forward.

Darwin Nunez, who joined Benfica from Almeria in 2020, has netted six times in eight outings so far this season, has emerged as one of the most exciting attacking prospects since he moved to Portugal

As per Portuguese outlet Record, whose information has been translated and relayed by Sport Witness, Nunez is 'on the radar' of a few European sides, including Manchester City, who are among the clubs who have made an approach for ths forward.

It has further been stated that City boss Pep Guardiola has held an interest in the Uruguayan striker since his move to Benfica last summer, and that the Catalan wanted to keep an eye on his start to life in the Liga Bwin.

The striker's agent Edgardo Lasalvia said, in an interview with the newspaper: “He (Nunez) is focused on Benfica. He wants to repay the trust they have placed in him and win titles this season."

Nunez, who has a release clause worth €150 million in his existing contract, which runs until 2025, was reportedly watched by scouts sent by City in his side's 3-0 win over Barcelona in the Champions League, when the attacker netted a brace.

While City have also been linked with a swoop for Borussia Dortmund's Erling Haaland and Fiorentina's Dušan Vlahović in recent months, Nunez could prove to be a sensational acquisition should the Etihad hierachy manage to win the race for his signature.

Though City have recovered from a shaky start to the season, it remains to be seen if they will decide against entering the January transfer market in the hunt for a striker to boost their chances of challenging on all fronts.

However, it is certainly possible that the Manchester outfit will hold out until next summer to acquire a classical number nine, which will certainly have a say in their chances of retaining their Premier League crown this term.

Man City 'Drawing Up Plans' on Left-Back Signing for 2022

It has been a position that has seemingly been one of the most difficult to recruit within since the arrival of Pep Guardiola, and the required wholesale changes that were made at the end of the 2016/17 season. During the Catalan manager's time at the club, a number of players...
PREMIER LEAGUE・6 DAYS AGO
CityXtra

Revealed: Where Five Man City Players Have Ranked at the 2021 Ballon D’or

There's no surprise nowadays that multiple Manchester City players are nominated for the top individual awards. Pep Guardiola has created a winning culture at the club that's perhaps like nowhere else. Tonight, the prestigious Ballon d'Or trophy will be handed out for the 65th time, so here are where the...
MANCHESTER, NY・3 DAYS AGO
The Independent

When Thomas Tuchel comes in after games and scans the other results, he doesn’t automatically go to Liverpool or Manchester City. At least not yet.“There are some teams behind us who show consistency, who show quality, who show determination,” the Chelsea manager said last week. “This is what it is. You have a right to be proud of your competition here, in the Premier League, and for us it feels good because we are in the middle of that race and we want to stay here. I don’t know if it will settle down.”There is a bit of a...
PREMIER LEAGUE・1 DAY AGO
ClutchPoints

Pep Guardiola asked the media to stop asking him about Raheem Sterling’s future at Manchester City after being asked about transfer rumors involving Barcelona. Ever since the start of the 2021-22 season, Raheem Sterling suddenly disappeared from Pep Guardiola’s starting 11 rotation. Sterling has always been an integral part of Man City’s system in the past few years–scoring and handing out several significant goals and assists for that matter. However, due to limited playing time this season, he has only tallied 1 goal and no assists for the Citizens in the Premier League.
PREMIER LEAGUE・13 DAYS AGO

De Jong was linked with a move to the Etihad Stadium before his switch to Barcelona from Ajax in 2019, with Manchester City boss Pep Guardiola keen to add him to his ranks. Since his move to Spain, the Netherlands international has made more than 100 outings for Barcelona, establishing himself as a key player for the Blaugrana during what has been a difficult time on and off the pitch for the La Liga outfit.
PREMIER LEAGUE・14 DAYS AGO
ESPN

Man City are fine without strikers: How Guardiola's team has evolved in 2021-22

The early portions of the European soccer season is rife with interruptions: three international breaks in the first three months, in fact. But with the latest round of World Cup qualifiers in the books, we actually get a sustained look at the club ranks, as the next time players join their national teams will be in late January. The Champions League knockout rounds will be set, and the Premier League season will be 60 percent over.
PREMIER LEAGUE・13 DAYS AGO
Yardbarker

The Sky Blues, currently situated in second place in the league table, will be looking to push leaders Chelsea with a victory over Everton at the Etihad Stadium at the weekend. City's clash against the Toffees is the first of eleven matches before the end of the year, with a...
PREMIER LEAGUE・13 DAYS AGO
The Independent

Manchester City boss Pep Guardiola claims Bernardo Silva is currently “undroppable”.The Portugal midfielder has enjoyed a fine start to the season after regaining his place in the Premier League champions’ side.The 27-year-old, who slipped down the pecking order last term, wanted to leave the club in the summer but no move materialised.BER-NAR-DOOOOOOOOO SILVA! 🎶⚽️ @Sure🔷 #ManCity | https://t.co/axa0klD5re pic.twitter.com/8nSbQ5qdMB— Manchester City (@ManCity) September 12, 2021Circumstances then offered Silva a way back into the team in the early weeks of the campaign and he has fully seized the opportunity, impressing in various guises in Guardiola’s fluid attack.Guardiola said: “Right now he’s...
PREMIER LEAGUE・12 DAYS AGO

"I Still Have the Feeling He Can Do Better!" - Man City Boss Pep Guardiola Opens Up on Star Defender's Current Form

Much has been made of the scintillating form of Manchester City full-back Joao Cancelo this season. The 27-year-old has cemented himself as one of Europe's top players in the position, despite often playing at left-back, while being a natural right-back. The Portuguese international has displayed world-class attacking ability from the...
PREMIER LEAGUE・13 DAYS AGO
FanSided

Manchester City could sign a striker in the January transfer window after missing out on Tottenham star Harry Kane in the past summer window. Tottenham chairman Daniel Levy stayed firm on his stance of not selling Kane to the club’s direct Premier League rival, which led to a deal not happening even after the Sky Blues tried until the final week of the summer transfer window.
PREMIER LEAGUE・12 DAYS AGO
CityXtra

The Sky Blues returned to second place in the table with another win against the Toffees, following Liverpool's 4-0 thrashing of Arsenal and Chelsea's 3-0 win away at Leicester on Saturday. With Jack Grealish out injured and Kevin De Bruyne sidelined after testing positive for COVID-19 last week, Pep Guardiola...
PREMIER LEAGUE・10 DAYS AGO
CityXtra

Sterling, who joined Manchester City from Liverpool in 2015, has found himself out of favour at the Etihad Stadium since August, as he prepares to the enter the final 18 months of his current contract. The 26-year-old has been heavily linked with a possible move to Barcelona, with Sterling himself...
PREMIER LEAGUE・13 DAYS AGO

Man City boss Pep Guardiola speaks out on Kevin De Bruyne testing positive for Covid-19 during the international break. After Belgium’s 1-1 World Cup qualifier draw against Wales, De Bruyne is now enduring ten days of self-isolation amid his positive Covid-19 test. This 10-day period is quite crucial for Man City as they face Paris Saint-Germain and Lionel Messi in the Champions League during a three-game stretch.
SOCCER・13 DAYS AGO
FanSided

Manchester City are supported all-round the globe for their style of play, their ability to come up trumps in crunch situations, and especially their “never-say-die” attitude. The Club has triumphed a record three Premier League titles in its previous four stints and the count of Carabao Cups is astonishingly second...
PREMIER LEAGUE・12 DAYS AGO
CityXtra

Pep Guardiola has made his name as arguably the best coach in world football after what has been a trophy-laden spell at the Etihad Stadium, where he has led Manchester City to three league titles amongst other domestic silverware. The likes of Kevin De Bruyne, Leroy Sane and Vincent Kompany...
PREMIER LEAGUE・12 DAYS AGO
CityXtra

In European football this season, there have not been many players who have rivalled Manchester City's Joao Cancelo for contributions at both ends of the pitch. The Portugal international has been in excellent form in the left-back role for Manchester City, establishing himself as one of the Premier League's most creative talents.
PREMIER LEAGUE・10 DAYS AGO
BBC

Manchester City manager Pep Guardiola says his side waited for the "right moment" to open the scoring and had a "really good performance" during their 3-0 win against Everton. Watch highlights of all of Sunday's Premier League action on Match of the Day 2 at 22:30 GMT on BBC One, iPlayer and the BBC Sport App.
PREMIER LEAGUE・11 DAYS AGO
fourfourtwo.com

Pep Guardiola is the Spaniard who identifies as a Catalan. Rafa Benitez is the Spaniard who can seem more of an Italian. When two Champions League-winning Spanish managers meet on Sunday, it will be a clash of philosophies and identities. There is a case that Guardiola, and his iconic Barcelona...
PREMIER LEAGUE・13 DAYS AGO
CityXtra

Guardiola, who joined Manchester City from Bayern Munich in 2016, has won ten pieces of silverware, including three Premier League titles, since taking over from Manuel Pellegrini at the Etihad Stadium. The 50-year-old has twice extended his contract since joining the Sky Blues, with his latest deal due to expire...
PREMIER LEAGUE・9 DAYS AGO
CityXtra

Last season's Champions League finalists City only need one point in order to progress to the knock-out stages of this season's edition of Europe's premier competition, once again. Manchester City have the opportunity to gain that elusive point on Wednesday night when they welcome a star-studded Paris Saint-Germain side to...
PREMIER LEAGUE・9 DAYS AGO