Watson has issued a standing trade request and has a powerful no-trade clause in his $156 million contract. His trade outlook is severely complicated because he's facing 22 civil lawsuits alleging sexual misconduct and/or sexual assault and 10 criminal complaints being investigated by the Houston Police Department. No charges have been filed.

No trade is imminent or developing at this time as general manager Nick Caserio continues to interact and field inquiries from other NFL teams, according to league sources not authorized to speak publicly. The Miami Dolphins remain at the top of Watson's list among teams that he would potentially waive his no-trade clause for, according to sources.

"We'll just wait and see," McNair said Wednesday during the Texans' second annual Founder's Day at the American Cancer Society Hope Lodge in Houston. "It's a day-to-day thing. Nick is in charge of that, so we'll see how that works out."

When asked to rate the odds of Watson being traded by a Nov. 2 league deadline, McNair smiled and replied: "I have no idea."

Watson remains on the Texans' 53-man roster, but doesn't play or attend games. He doesn't practice or attend meetings by mutual agreement with the AFC South franchise, complying with what he's asked to do to be paid his $10.54 millions salary.

Watson's discontent with the organization dates back to the controversial DeAndre Hopkins trade and discontent about a lack of communication with the team during the Texans' hiring process of general manager Nick Caserio and coach David Culley.

Before the legal problems surfaced, Culley was told by Watson that, no offense to him, but he was "intentional" about not playing another down for the Texans.

The Texans are 1-3 and are in a three-game losing streak since starting quarterback Tyrod Taylor strained his hamstring against the Cleveland Browns. Rookie quarterback Davis Mills is 0-2 as a starter and threw four interceptions in a loss to the Buffalo Bills.

"I think they've been put in a very tough spot, a spot that is not of their choosing and they've made the very best of it and sort of worked through it day to day," McNair said. "So, we'll see where it goes."

The NFL has not placed Watson on the commissioner-exempt list. Watson reported to training camp to avoid incurring $50,000 daily fines.

The NFL issued a statement prior to training camp.

"The NFL’s review of the serious allegations against Deshaun Watson remains ongoing and active," the league said in an email. "We are working cooperatively with the Houston Police Department and ensuring that the NFL’s inquiry does not interfere with their investigation. As we continue to gather additional information and monitor law enforcement developments, we will make appropriate decisions consistent with the Collective Bargaining Agreement and the Personal Conduct Policy.

At this time, there are no restrictions on Watson’s participation in club activities."

Watson's attorney, Rusty Hardin, said during an August press conference that Watson has yet to speak to NFL investigators. 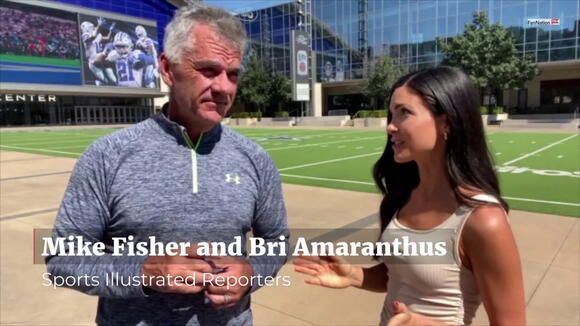 Texans Making Change At Quarterback After Loss To Jets?

HOUSTON - Tyrod Taylor's status as the Houston Texans' starting quarterback is secure for the remainder of the season with no plans to go back to rookie Davis Mills. Despite the abysmal offensive output in Sunday's loss to the New York Jets, Texans coach David Culley said that it would take an injury sidelining the veteran passer for him to be replaced.
NFL・8 DAYS AGO
Sportsnaut

Depositions for the Deshaun Watson lawsuits and legal battle will reportedly begin today, with the attorney for the Houston Texans
NFL・8 DAYS AGO
TexansDaily

The 1-8 Houston Texans raised eyebrows earlier this year when opting to move third-year offensive lineman Tytus Howard from right tackle to guard. Despite mixed results and calls on social media to move him back to his old position, all signals point to him calling guard home. At least for...
NFL・18 DAYS AGO
TexansDaily

NASHVILLE, Tenn. -- Houston Texans veteran tight end Jordan Akins, a pending unrestricted free agent in the final year of his contract, is a healthy scratch Sunday against the Tennessee Titans. Akins is a healthy scratch and it is strictly a football decision, according to a league source not authorized...
NFL・16 DAYS AGO

Houston Texans' veteran quarterback Tyrod Taylor had the benefit of a clean pocket last Sunday against a usually formidable Tennessee Titans' pass rush. Taylor wasn’t sacked during the Texans’ 22-13 upset victory on the road at rain-soaked Nissan Stadium. He was knocked down only once - by blitzing cornerback Elijah Molden. Despite the presence of Tennessee's Harold Landry (who entered the game with 10 sacks), defensive tackle Jeffery Simmons (who leads NFL interior defensive linemen with 7.5 sacks) and defensive end Denico Autry (five sacks), the Texans’ overhauled offensive line more than held up.
NFL・14 DAYS AGO
TexansDaily

HOUSTON - The Houston Texans have a plan to expand the run game following the release of Phillip Lindsay. His name? Scottie Phillips. Lindsay was released Tuesday by the Texans (2-8) after a sluggish start through the first 10 games of the season. Despite being a former Pro Bowl back and two-time 1,000-yard runner with the Denver Broncos, Lindsay, 27, was on pace for a career-worst season in Houston.
NFL・13 DAYS AGO
TexansDaily

Houston Texans quarterback Tyrod Taylor wasn't asked to do too much on Sunday at Nissan Stadium. Then again, he really didn't have to in order to win. Sure, Taylor's two touchdowns in a 22-13 win over the Tennessee Titans were impressive. The effort ended a 17-quarter run during which the Texans (2-8) could not find the end zone on the road.
NFL・15 DAYS AGO
TexansDaily

Texans' Best Player? Brandin Cooks - And He Can Help Even More

HOUSTON - Brandin Cooks is arguably the Houston Texans’ most valuable offensive player. And he's definitely the most effective weapon on the lowest-scoring offense in the league. The veteran wide receiver has 59 receptions for 659 yards and two touchdowns, also leading the 2-8 Texans with 87 targets and ranks...
NFL・11 DAYS AGO

Who's to Blame for Texans' Running Game Woes?

HOUSTON -- Frustration mounts, but touchdowns and yards don’t. The Houston Texans’ languishing running game, despite a heavy emphasis on establishing the run and signing three former Pro Bowl selections in the offseason, continues to struggle mightily. Plunging into the line of scrimmage in any direction doesn’t meet with the...
NFL・11 DAYS AGO
bleedinggreennation.com

Let’s get to the Philadelphia Eagles links ... My guess is Hurts will play well enough the rest of the year to where the Eagles go into the offseason with their options open. They’ll have three first-round picks, but this is the sort of quarterback class where Howie Roseman & Co. will look at their options and believe earnestly that Hurts is a better one than any of the kids coming out (I’d bet my mortgage there’ll be teams this spring without a first-round grade on any of the quarterbacks). That’d leave the Eagles with the veteran names we’ve all heard. I don’t think they’d necessarily be a suitor for Aaron Rodgers. Russell Wilson? Maybe, since he’s the one who got away—Roseman, Andy Reid and Philly planned on taking him in the third round in 2012 before the Seahawks got him 13 picks in front of them (the Eagles wound up with Nick Foles instead). Then, there’s Deshaun Watson. That one, I think, would be a real possibility, especially if there’s more clarity on his legal situation in a few months.
NFL・5 DAYS AGO
TexansDaily

HOUSTON -- The skills and maturation of rookie tight end Brevin Jordan haven’t gone unnoticed. In a nod to his development, the Houston Texans' fifth-round draft pick from the University of Miami is starting to be utilized in a versatile role that includes splitting him outside as a receiver. The...
NFL・15 DAYS AGO
USA TODAY Sports Media Group

The Miami Dolphins have been on a roll the past four weeks, winning each of their contests and improving to 5-7 on the season. Through this stretch, it’s been Miami’s defense that has carried them to victories, but their quarterback has shown signs of improvement as well. Tua Tagovailoa has played in three of the wins, starting two of them, and with his opportunities, he’s completed 81% of his passes for 661 yards, three touchdowns, and one interception with a passer rating over 100.
NFL・5 DAYS AGO

The Latest: Texans Taylor benched, Mills at QB vs. Colts

The Latest from Week 13 of the NFL (all times EST):. Houston Texans quarterback Tyrod Taylor has been benched in the third quarter against the Indianapolis Colts. Taylor was evaluated for an undisclosed injured after a Houston’s first possession of the third quarter but the team said he was available to play and it was coach David Culley’s decision to insert backup Davis Mills in his place.
NFL・2 DAYS AGO
TexansDaily

Texans Win By Losing To Jets?

After producing the NFL's oddest outlier of the season last week, the Houston Texans returned to Earth Sunday at NRG Stadium. Life without the benefit of four interceptions and a muffed punt inside the opponent's 10-yard line returned alarmingly normal and routinely unsuccessful in a 21-14 defeat. Seemingly eons removed from the shocking upset of the 8-2 Tennessee Titans, the Texans found ways to lose to the 2-8 New York Jets.
NFL・9 DAYS AGO
TexansDaily

Old habits die hard as the Houston Texans responded to last week's unexpected victory against the Tennessee Titans to lose 21-14 against the New York Jets at home on Sunday. The 2-9 Texans seemed to have lost much of the momentum built up last week as their offense stumbled their way through yet another game. Lovie Smith's defense did its best to give this team a chance to beat a now 3-9 Jets team.
NFL・9 DAYS AGO
TexansDaily

HOUSTON -- David Culley smiled while sharing kind words with military veterans, shaking hands as he distributed meals and encouragement and thanked them for their service. The Houston Texans coach, whose father and uncle served in the military during the Korean War and World War II, was grateful for the moment as players, coaches and executives handed out items, including blankets and Texans gear, to veterans Monday afternoon at Michael E. DeBakey VA Medical Center in Houston.
HOUSTON, TX・15 DAYS AGO
TexansDaily

Can Injured Justin Britt Return for Texans vs. Colts?

HOUSTON -- Justin Britt is making progress toward returning to play with Houston Texans coach David Culley expressing guarded optimism that the veteran center could be back for Sunday's home game against the Indianapolis Colts. Britt was designated for return from injured reserve last week and practiced for the first...
NFL・8 DAYS AGO
TexansDaily

Continuity has been near impossible to come by for the Houston Texans' offensive linemen thanks to injuries and poor play. The only player to start every game this year along the line is Tytus Howard. In Sunday's 21-14 loss to the New York Jets, Howard remained but was moved to...
NFL・8 DAYS AGO
TexansDaily

How Did Jets - NFL's Worst Defense - Shut Down Texans?

HOUSTON -- Stonewalled at every turn, frustrated into a series of aimless, unproductive drives and stymied in every strategic attempt, the Houston Texans’ offense skidded to a halt against the New York Jets. It didn’t matter that the Jets entered Sunday’s game at NRG Stadium as one of the least...
NFL・8 DAYS AGO
TexansDaily

How To Watch Texans vs. Jets: NFL Draft Ramifications?

The Houston Texans are coming off their most impressive win of the season, a shocking 22-13 upset of division rival and AFC-leading Tennessee Titans. Now the Texans face another AFC opponent Sunday, one that looks more like a mirror-image of themselves. A football polar opposite of the Titans. The Texans...
NFL・12 DAYS AGO