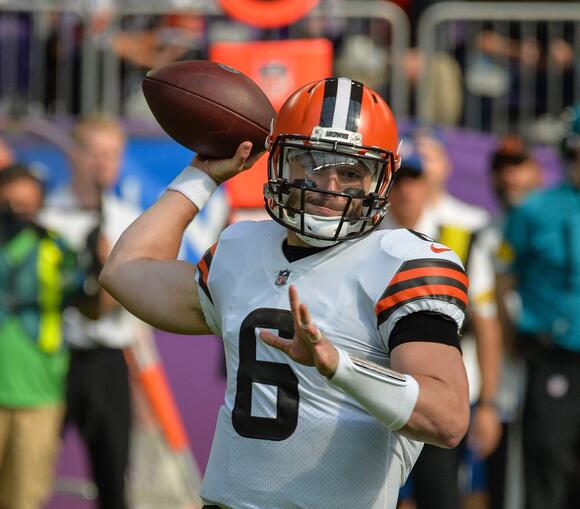 BEREA, Ohio (92.3 The Fan) – Through the first two games Baker Mayfield was leading the NFL in completion percentage at 81.63.

In the two weeks that have followed, Mayfield’s completion percentage has plummeted to 53.13% combined in wins over the Bears and Vikings.

“Missing the throws, and then the same problems – hitting the guys that are open, taking what’s there,” Mayfield said Wednesday. “Yeah, just gotta get it corrected.”

Mayfield is not one for excuses.

He’s never made them before, and he’s not about to start now regardless of the mitigating circumstances he might be dealing with on or off the field, but one moment stands out as the potential root cause for his recent misfires.

Mayfield’s left shoulder popped out and in as he described it September 19 in the second quarter of a 31-21 win over the Texans.

He’s not looked the same since.

“You can always point your finger at a few things, but we missed a couple of guys, and we are going to work really hard to make sure we hit them this week,” head coach Kevin Stefanski said. “I have seen Baker have great success in games, and I have no doubt that we will work at it this week.”

In addition to flying his physiologist to town to give him treatment, Mayfield has been wearing a harness to help hold his left shoulder in place during games begging the question if the harness was affecting his throws.

“It shouldn’t, no,” Mayfield said.

Sunday at Minnesota Mayfield was off all afternoon.

He hit left guard Joel Bitonio in the back with a throw on a simple screen to Kareem Hunt. Then there was him not even recognizing Demetric Felton open on the sideline on third-and-short, tucking it and running right into a sack instead. Then came the miscommunication with Odell Beckham Jr. in the final 2 minutes which had he hit him would’ve resulted in a game-sealing walk-in touchdown for Beckham.

“That was one of those games where we weren't looking for 80+ completion percentage, but just those throws, you look at completing some of those and you're looking at a completely different ballgame,” Mayfield said.

Mayfield has adjusted his footwork the last two years under Stefanski and offensive coordinator Alex Van Pelt, but from his perspective, that’s not the issue.

“I think my footwork was clean,” Mayfield said. “It’s just about making the plays when they’re there. I really don’t think it’s that complicated. Everybody’s going to try and make an excuse. I pretty much hit on it after the game, just gotta make the damn play. it’s that simple.”

The Browns head coach downplayed the notion that Mayfield’s mechanics might be off.

“Certainly, at the quarterback position, you want to try and make sure your mechanics are right,” Stefanski said. “Baker does a great job out here working on his technique, and we will just have to continue to do that.”

Despite Mayfield’s recent struggles with consistency, the Browns are still winning.

“It’s nice when you can play around 50 percent completion, which is terrible, and then to have a win on the road in a hostile environment against a good team, so yeah that’s nice going on the road like that,” Mayfield said, “but there’s still a standard that I’ve kind of set for myself and try to hold myself accountable to, so I didn’t do that.”

If you made it to this point that means you didn’t just get mad at a headline and leave a hateful comment on the post – so you deserve a pat on the back. Let’s check out how Baker Mayfield is exciting a Browns civil war. The Cleveland Browns fan...
NFL・13 DAYS AGO
ClutchPoints

It’s been a wild week for the Cleveland Browns. With the discerning news of Odell Beckham Jr.’s disapproval with the organization, things were looking bleak for the franchise. Fortunately for them, the team rallied behind Baker Mayfield and beat the Cincinnati Bengals on Sunday. During the postgame press conference, Mayfield...
NFL・28 DAYS AGO
FOX Sports Radio

Why the Browns Are Officially Finished With Baker Mayfield

Colin Cowherd explain why he doesn’t think Baker Mayfield will be the quarterback of the Cleveland Browns once his contract runs out with the team after next season.
NFL・6 DAYS AGO
brownsnation.com

Retired NFL great Drew Brees has always taken some interest in the Cleveland Browns‘ Baker Mayfield. The pair grew up and attended high school barely 10 miles apart in Texas. And their early career paths share some uncanny similarities. Brees once preached patience to the rookie Mayfield, telling him to...
NFL・11 DAYS AGO

Baker Mayfield came into today’s must-win game against the Detroit Lions nursing several injuries, including a bruised heel and torn labrum in his left shoulder. Mayfield is admittedly playing through a lot of pain, but it was Cleveland Browns fans who were hurting watching him throw a brutal early interception.
NFL・14 DAYS AGO
92.3 The Fan

Browns defensive end Myles Garrett said he has no rift with defensive coordinator Joe Woods, Baker Mayfield will start against the Lions and more notes from Friday.
NFL・16 DAYS AGO
The Spun

The 2021 NFL regular season was seen by many as a make-or-break year for Cleveland Browns quarterback Baker Mayfield. So far, it’s been a lot more of a break it year. Mayfield, who’s been dealing with several injuries throughout the season, is not having the kind of “I deserve a massive contract extension” season he was hoping for.
NFL・7 DAYS AGO
ClutchPoints

The Cleveland Browns narrowly squeezed out a win at home over the Detroit Lions on Sunday. They didn’t escape without controversy, however, as quarterback Baker Mayfield’s actions after the game stirred the pot with fans and the media. After reportedly refusing to address the media following the win, Mayfield did...
NFL・13 DAYS AGO

The Cleveland Browns suffered another frustrating loss this week, falling 16-10 to the rival Baltimore Ravens despite forcing four turnovers. Browns QB Baker Mayfield was once again uneven, so he’s ready for the bye week. Speaking to the media after yesterday’s loss, Mayfield said that the bye week gives them...
NFL・6 DAYS AGO
clesportstalk.com

Get prepared for your Thanksgiving dinners of, of course, giving thanks with your family and then subsequently debating if quarterback Baker Mayfield is “The Guy” or not. Beforehand, the Browns are facing the Detroit Lions at First Energy Stadium in Cleveland. The Lions have an abysmal record of 0-8-1. Whereas the Browns are sitting at 5-5 and really are in a must-win situation with the loaded AFC North.
NFL・14 DAYS AGO
Cleveland.com

CLEVELAND, Ohio — Baker Mayfield explained Monday that the bolted from the field and declined to talk to the media after Sunday’s 13-10 victory over the Lions because he was mad about playing so poorly. “Yeah, I was frustrated, among other things, yeah, I mean I’ve never dodged any questions...
NFL・13 DAYS AGO
FanSided

Nick Chubb is face of Cleveland Browns, not Baker Mayfield

Folks, there isn’t much room for debate. The Cleveland Browns need to start running the ball early and often. This article is the third in a series which discussses the role of the quarterback for the Cleveland Browns. It’s suggested that the job of Browns quarterback ought to be to manage a run-first, natural turf, cold weather, power football team.
NFL・13 DAYS AGO

Ornery Baker Mayfield says he ‘played like (expletive)’ for Browns vs. Lions

Baker Mayfield will play through injuries. He will own up to it when he plays poorly. He’ll pat a teammate on the helmet encouragingly if the player drops a pass or fumbles and throw him the ball the next time an opportunity arises. What the Browns quarterback won’t do is...
NFL・13 DAYS AGO
Huron Daily Tribune

CLEVELAND (AP) — Browns quarterback Baker Mayfield said frustration with his own performance — not being booed by Cleveland fans — caused him to head straight to the locker room following the game and not speak to the media. Mayfield threw two interceptions in Sunday's 13-10 victory over the winless...
NFL・13 DAYS AGO
FanSided

Why Baker Mayfield would be very hard to replace

Baker Mayfield: “All I care about is winning”

The list of people frustrated by the performance of the Cleveland Browns on Sunday - even though they won — stretches from the front office to the coaching staff, players and all the way to the Muni Lot. But no one was more frustrated than quarterback Baker Mayfield after completing...
NFL・13 DAYS AGO
ESPN

BEREA, Ohio -- Cleveland Browns fans booed Baker Mayfield multiple times in the second half of Sunday's 13-10 victory over the winless Detroit Lions. "Those are probably the same fans that won't be quiet while we're on offense and trying to operate," the Cleveland quarterback said Monday. "So, don't really care."
NFL・13 DAYS AGO
clesportstalk.com

NO WORDS – Baker Mayfield Just Needed to Say This:

The Browns won on Sunday and it was an ugly performance. Want to read more about the win? CLICK HERE. Anyway, the postgame news is that Browns quarterback Baker Mayfield actually left without talking to the media. This is the first time in his career that he has not spoken to reporters after the game. It’s pretty much standard procedure to talk to them, especially if you’re someone as notable as Mayfield is for the Browns.
NFL・13 DAYS AGO
NBC Sports

BEREA, Ohio -- Cleveland Browns quarterback Baker Mayfield had arguably, his worst game of the season, statistically, against the winless Lions. He was 15-of-29 for 176 yards with a touchdown and two interceptions and a dismal rating of 53.2. Despite the performance, the Browns were still able to manage to win, 13-10. Mayfield walked off the field directly after the win and declined to speak to the media after the game, which is mandated by the NFL. Mayfield did speak to reporters on Monday and explained some of his frustrations.
NFL・12 DAYS AGO