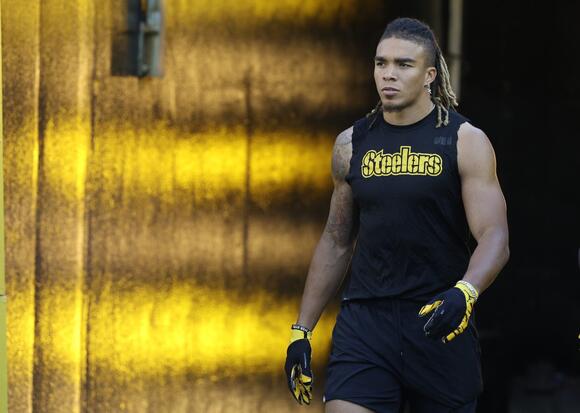 The Steelers injury list is lengthy but there is some good news as well going into an important week against the Denver Broncos at Heinz Field.

Ben Roethlisberger (who never practices on Wednesday) is listed with a pectoral/hip injury. He told reporters earlier in the day that he’s pretty sore but is working toward playing on Sunday.

Defensive tackle and team captain Cam Heyward made his first appearance on the injury list this year with a neck issue. He was limited and coach Mike Tomlin didn’t mention Heyward’s injury during his weekly news conference on Tuesday.

Wide receivers JuJu Smith-Schuster and Chase Claypool (who didn’t play Sunday against the Packers) were limited, but Claypool posted on Twitter after practice saying he is “grinding to get back to the Steelers faithful this weekend.”

Offensive lineman, making his way back from concussion protocol, was full after missing last week’s game

Trai Turner was limited with an unspecified illness along with offensive lineman Rashaad Coward with an ankle.

On Monday, Pittsburgh Steelers wide receiver Chase Claypool told the media that he thinks head coach Mike Tomlin should add some music to the team practices to make them more fun and more uptempo. “We have music in the warm ups and that, so it’s fun. People are dancing, having...
NFL・11 HOURS AGO
ClutchPoints

Pittsburgh Steelers defensive tackle Cam Heyward has no time for nonsense, and he made that extremely clear when he ripped into wide receiver Chase Claypool’s suggestion following the team’s embarrassing 41-10 loss to the Cincinnati Bengals on the road in Week 12. Via Mike Prisuta:. Cam Heyward responded today on...
NFL・13 HOURS AGO
USA TODAY Sports Media Group

Nothing can derail a potentially successful fantasy football season quicker than injuries. That’s especially true at the ever-so-critical wide receiver position, where elite-level players can make or break a contending fantasy team. As we head into Week 11, several WRs find themselves on the injury report for their respective teams. Therefore, fantasy managers need to pay close attention to any WR injury updates and reports as NFL kickoffs draw near.
NFL・13 DAYS AGO

The Pittsburgh Steelers had a number of players missing on both sides of the ball in Week 11. Between T.J. Watt, Minkah Fitzpatrick, Joe Haden, and Kevin Dotson, the Steelers had a lot of players filling in. But there were also players who returned to the lineup who had missed the previous week such as Ben Roethlisberger and Chase Claypool. While Roethlisberger’s return saw some obvious differences, the return of Chase Claypool also had an impart on the offense. That is the subject for this week’s Steelers Vertex.
NFL・4 DAYS AGO
Tribune-Review

In a season that has featured more injuries and games missed than touchdown catches, Chase Claypool flashed back to better times last Sunday night when he pulled in a 37-yard reception against the Los Angeles Chargers. “It was like rolling the clock back to last year when we did a...
NFL・3 DAYS AGO
USA TODAY Sports Media Group

It’s early in the workweek as the Steelers prepare to take on the Los Angeles Chargers, so all of the injuries that came out of the team’s tie with the Lions are still being managed. On his first day back since injuring his toe versus the Chicago Bears, Steelers wide...
NFL・13 DAYS AGO
ClutchPoints

The Pittsburgh Steelers are in shambles right now and desperately need a spark after an embarrassing loss to the Cincinnati Bengals. Enter second-year wideout Chase Claypool, who suggested the team should incorporate some music into practices to lift the tempo and have more fun. Well, that idea was already ripped to shreds by veteran Cam Heyward, who was clearly furious at Claypool’s comments.
NFL・10 HOURS AGO

The Pittsburgh Steelers are playing some pretty terrible football right now and everyone is looking for answers. Wide receiver Chase Claypool spoke to the media on Monday and when asked for his ideas for how to help this slumping group, he had an idea. Music. I’m not making this up.
NFL・1 DAY AGO
102.5 WDVE

Claypool's comments on Monday caused a stir amid the Steelers' recent woes.
NFL・10 HOURS AGO
93.7 The Fan

Steelers receiver Chase Claypool asked about what can help with practice, his answer was unique as he talked with reporters after 41-10 loss to Cincinnati
NFL・1 DAY AGO
The Spun

With last night’s victory over the Chicago Bears, Mike Tomlin moved past Bill Cowher into second place on the Pittsburgh Steelers’ all-time coaching wins list. Tomlin now has 150 career victories, becoming the 20th head coach in NFL history to reach that plateau. Only Don Shula, George Halas and Curly Lambeau reached 150 wins faster than Tomlin, who did it in 232 games.
NFL・21 DAYS AGO

The San Francisco 49ers were one of the best teams in the NFL during the 2019 season, and an 8-0 start was nothing to laugh at. One of the biggest reasons for that perfect record was the play of quarterback Jimmy Garoppolo, and, needless to say, his confidence was at an all-time high.
NFL・23 DAYS AGO
The Spun

The Dallas Cowboys had to play last weekend’s game without their starting quarterback in Dak Prescott. This week, the NFC East leaders could have to play without their starting running back in Ezekiel Elliott. Elliott limped off the field following the Cowboys’ most-recent drive against the Denver Broncos defense. While...
NFL・23 DAYS AGO
The Spun

With Aaron Rodgers officially back, the Green Bay Packers did some backup quarterback shuffling on Monday afternoon. The Packers activated Kurt Benkert from the practice squad Reserve/COVID-19 list and released former No. 3 overall pick Blake Bortles. Green Bay originally brought Bortles into the fold earlier this month after Rodgers and Benkert tested positive for COVID-19.
NFL・15 DAYS AGO
defector.com

Does Lamar Jackson Have Doo-Doo Ass Or What

Ravens quarterback Lamar Jackson was a late and unexpected scratch from Baltimore’s Week 11 road game against the crummy Bears. Jackson, who’d had a cold earlier in the week, said he was “feeling great” after practicing Friday, suggesting he was on track to play. So what the hell happened? Random weight-room injury? Tripped by a mischievous dog while walking down the stairs of his own home? Abducted by aliens? What could knock an MVP-grade quarterback out on a Sunday morning, thrusting the undrafted Tyler Huntley into action for an important road contest?
NFL・9 DAYS AGO
The Spun

The football world is mourning the loss of a former Baltimore Colts and Ohio State Buckeyes player. Tom Matte, who played collegiately for Ohio State and then starred in Baltimore, passed away earlier this week according to a statement from the Ravens. He was 82 years old. “Tom became an...
NFL・27 DAYS AGO
The Spun

Aaron Rodgers and the Green Bay Packers will have to do their best to hold off the Los Angeles Rams in the second half of Sunday’s between the two NFC elites without one of their best wide receivers on the field. The Packers announced early in the third quarter of...
NFL・2 DAYS AGO
thecomeback.com

If the reports are true that the LSU Tigers are going to hire Brian Kelly and pay him upwards of $15 million/year as their head coach, Alabama Crimson Tide coach Nick Saban may have also just automatically received a raise. When Saban signed a contract extension to stay in Tuscaloosa...
ALABAMA STATE・1 DAY AGO
The Spun

Mike Tomlin appears to have his made his decision about who will start at quarterback for the Steelers on Sunday. Tomlin appeared on Pittsburgh’s 93.7 The Fan to talk about the team’s QB situation, the Chargers, and more. Per 93.7’s Andrew Filliponi, the Steelers will “build” their plan around Mason...
NFL・14 DAYS AGO