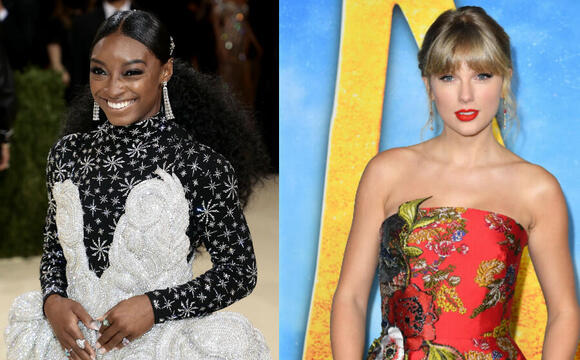 Simone Biles presented Taylor Swift with the Grand Award for Special or Variety at this year's Gracie Awards for her concert film, Folklore: The Long Pond Studio Sessions . The presentation saw both Biles and Swift exchanging compliments for one another, reflecting on their mutual admiration.

"It is given to a woman that has made contributions to media that go above and beyond, that shine a spotlight on issues, and display creativity and storytelling," Biles had said when she presented the award to Swift.

Swift and Biles have long been supportive of one another, with Biles sharing with those watching the 46th Gracie Awards that Swift had been there when she chose to take a step back from the Olympic Games in Tokyo. "She's always been so raw, open and honest, and that's one of the many things I love about Taylor," Biles said of their friendship.

Swift also thanked Biles as she accepted her award, telling the legendary gymnast, "I absolutely adore you, and that just really made my heart skip a beat."

Swift's pandemic record, Folklore , and it's companion, Evermore , marked a new era for the singer. Folklore snagged a Grammy for Album of the Year last year, and has become one of Swift's most successful records to date.

While walking the red carpet at the InStyle Awards on Nov. 15, Simone Biles looked incredible in her cutout dress, which featured a thigh-high leg slit. Simone Biles looked absolutely stunning at the 2021 InStyle Awards, which took place at the Getty Center in Los Angeles on Nov. 15. The Olympic gymnast wore a black dress, which featured a thigh-high slit up one side. The ensemble had side cutouts and straps that were held together by bows on Simone’s shoulders. She completed the look with open-toed, mint green heels, and wore her hair parted down the middle and styled in long braids.
LOS ANGELES, CA・13 DAYS AGO
Footwear News

Simone Biles brought a refreshing take to the cutout trend at the 2021 InStyle Awards at the Getty Center in Los Angeles, California. The Olympic athlete hit the red carpet in a flowing dark green gown by Aliette. The style featured a flowing skirt and allover ruched draping details. The textured number also included bows with long ends accenting two straps and a daring thigh-high slit. Biles added an elegant touch to her ensemble with Mateo New York drop earrings and a dark green Judith Lieber clutch. For shoes, Biles created a two-tone look with mint green sandals. The Christian Louboutin style featured thin ankle and toe straps in shiny leather. The style added a bold pop of color to the “Courage to Soar” author’s outfit, while elevating her gown’s formal dress code with a modern twist. The annual InStyle Awards honor the year’s top talents in the fields of fashion, beauty, and pop culture. This year’s ceremony, held at the Getty Center in Los Angeles, California, honored a range of individuals including Simone Biles and Congresswoman Katie Porter. This year’s event was sponsored by Christian Louboutin, Fiji, Citizen Watches, Bird in Hand Wine and Cadillac. Click through the gallery for more celebrity arrivals from the 2021 InStyle Awards.
LOS ANGELES, CA・13 DAYS AGO
POPSUGAR

How on earth can one possibly sum up the multifaceted powerhouse that is Simone Biles? Amanda Gorman took on the challenging task during the 2021 InStyle Awards and passed with flying colors — because of course she did. Before presenting the decorated gymnast with The Original award during the ceremony in Los Angeles on Monday, Amanda recited an original poem she penned about Simone titled "The Greatest," honoring the woman behind her impressive collection of 32 medals.
CELEBRITIES・13 DAYS AGO
HOLAUSA

Taylor Swift is looking back at her past romance with Jake Gyllenhaal, giving fans an extended version of ‘All Too Well’ from her album ‘Red (Taylor’s Version), hinting at the real reason for their breakup. This is not the first time Taylor revisits a past love, as...
CELEBRITIES・17 DAYS AGO

Melissa McCarthy says Monday night’s InStyle Awards at the Getty Center was her first big public outing since the onset of the pandemic. “I went into a CVS like two months ago and was like, ‘Uhhh, I don’ know what to do,’” she said from the stage after being presented with this year’s Icon Award from her “Nine Perfect Strangers” co-star Nicole Kidman. Earlier, on the arrivals carpet, she told me, “This is the first time I’m with humans besides my fella and the humans I bore.” And that’s when things got emotional. As we were talking, fellow honoree Simone Biles walked...
CELEBRITIES・13 DAYS AGO
New York Post

I bet you Jake Gyllenhaal is still thinking about his ex-girlfriend Taylor Swift, at least that’s what fans are thinking. Since the infamous red knit scarf appeared in “I Bet You Think About Me,” it’s hinted that her latest breakup ballad is about her 40-year-old ex-boyfriend, who is alleged to have never given Swift back her neckwear after the couple broke up in 2010.
THEATER & DANCE・14 DAYS AGO
Footwear News

The 2021 InStyle Awards brought out a range of stars on the red carpet to honor the achievements of individuals in fields like fashion, beauty and culture. This weekend, celebrities and public figures gathered to celebrate their accomplishments at the Getty Center in Los Angeles, California. Those in attendance brought out bold and glamorous attire for the occasion. Stars like Kate Hudson and Nicole Kidman donned fully sequined gowns or dresses for the occasion. Others, like June Smollett, Phoebe Dynevor and Jane Levy, opted for tonal dresses or jumpsuits composed of dark or vibrant lace and silks. Still, there were also...
LOS ANGELES, CA・13 DAYS AGO
Us Weekly

Gold rush! Taylor Swift took home another trophy during the 2021 American Music Awards: Favorite Pop Album. The 31-year-old artist wasn’t at the ceremony in Los Angeles on Sunday, November 21, but she accepted her award in a recorded video message. “Thank you so much to the fans,” the “State of Grace” songstress said. “This is such an amazing honor, the fact that you would do this for Evermore. I’ve always been so proud of this album. I’ve always looked at Evermore as sort of Folklore‘s adventurous, fun younger sister.”
LOS ANGELES, CA・8 DAYS AGO

Taylor Swift may not have been present at the 2021 American Music Awards, but she still took home some hardware!. 's win remotely for favorite pop album at Sunday night's show, and offered her fans a special shout-out in a pre-recorded video. "Thank you so much to the fans, this...
MUSIC・8 DAYS AGO
thejustice.org

Taylor Swift won the Female Artist of the Year at American Country Awards in 2010. Taylor Swift is turning a series of re-releases of old career highlights into new career highlights and showing off both the strengths and weaknesses of that idea in the process. This week she released “Red (Taylor’s Version),” a re-recording of her 2012 album “Red.” It’s her second re-recording, after “Fearless (Taylor’s Version)” came out earlier this year.
CELEBRITIES・13 DAYS AGO
987thebull.com

Taylor Swift Performed In Front Of An Ex

Taylor Swift performed the new 10-minute version of her breakup song “All Too Well” on “Saturday Night Live” this weekend. Everyone pretty much knows it’s based on Taylor’s relationship with Jake Gyllenhaal. Several celebrities were in attendance, including Joe Jonas, who was once the subject of another Taylor Swift breakup song.
MUSIC・14 DAYS AGO
The New Yorker

In the early years of her career, Taylor Swift stepped lightly, transforming from a precocious country musician into a global pop star. She shifted her sound and her image gradually, a strategy that seemed less about allegiance to a particular genre than about personal traditionalism. (She did not start cursing in her music until she was in her late twenties.) Swift has always been a rule-follower—a diligent songwriter with a wholesome image—which made her a kind of renegade in a brash, hypersexualized pop landscape. On “Red,” her fourth album, from 2012, she began dipping a toe into modernity. In the song “I Knew You Were Trouble,” she nodded to the aggressive and trendy sounds of E.D.M., adding a light dubstep drop before the chorus. By most pop standards, it was a subtle flourish, but for Swift it was like an earthquake. In “Treacherous,” she incorporated sexuality into her lyrics for the first time: “I’ll do anything you say / If you say it with your hands.”
MUSIC・13 DAYS AGO

‘Red’ is finally back in Taylor Swift’s hands. Nine years after its original release, ‘Red (Taylor’s Version)’ dropped on Nov. 12. The album consists of 30 songs, 10 of which are ‘vault’ songs, a mix of unreleased and previously released music, all originally meant for the album. Since last November,...
CELEBRITIES・10 DAYS AGO
HollywoodLife

When Taylor Swift and the NBA collide

Though not known as a basketball fan, Taylor Swift has had a long-running relationship with the NBA that predates her recording career and continues today. On Friday, Taylor Swift released Red (Taylor’s Version), the second installment in her ongoing quest to re-record each of her first six albums. Red remains her best record as well as a pivotal step in her evolution, capturing a moment where she was on the verge of abandoning her country roots in favor of attaining pop supremacy.
NBA・10 DAYS AGO
FASHION Magazine |

Taylor Swift is Reclaiming the Narrative

The songwriter's genius is no longer up for debate. Taylor Swift dropped the long-awaited re-recorded version of her 2012 album Red earlier this week, with nine never-before-released songs “from the vault” and a one ten-minute long version of the breakup ballad “All Too Well.”. This, of course, sent fans into...
BEAUTY & FASHION・13 DAYS AGO
HollywoodLife

And the winner is… Many of the biggest names in music were nominated at the 2021 American Music Awards, so find out who went home with a new trophy for their mantle. 2021 wasn’t going to end with at least one more opportunity to celebrate the biggest and brightest stars in music. The 49th Annual American Music Awards looked to close out the year with one more “biggest night in music,” honoring some of the stars that have made the past twelve months worth living. Hosted by Cardi B and taking place on Nov. 21 at the Microsoft Theater in Los Angeles, the 2021 AMAs saw newcomer Olivia Rodrigo lead the pack with seven nominations. The High School Musical: The Musical: The Series star was up for Artist of the Year, New Artist of the Year, Favorite Trending Song (“drivers license”), Favorite Music Video (“drivers license”), Favorite Female Pop Artist, Favorite Pop Song (“drivers license”), and Favorite Pop Album (Sour.)
LOS ANGELES, CA・8 DAYS AGO
NBC News

Essence magazine didn’t settle for just one gorgeous cover image for its November/December issue — instead, they featured three different superstars. Olympic gymnast Simone Biles, pop sensation Lizzo and Pulitzer Prize-winning journalist Nikole Hannah-Jones, founder of the 1619 Project, each grace a cover of the magazine’s last issue of 2021. The magazine said these three women are trailblazers when it comes to radical self-love and the power of saying no, which only reinforces their strength and beauty.
CELEBRITIES・10 DAYS AGO
Elle

Taylor Swift has been giving her Red From the Vault songs their shining moment on her social media—and in the case of promoting “Nothing New,” Swift pulled into the Drunk Taylor Swift archives. The singer shared two photos of her from a drunk night that went viral and became the internet's favorite meme in August 2019. “I cringe but I miss her. Your move @phoebebridgers,” she wrote, tagging her duet partner in the track.
CELEBRITIES・10 DAYS AGO
Audacy

The ‘Album Of The Year’ category at the 2022 GRAMMYs will have a bit of an MMA event feel to it as two of music’s biggest names ever, Taylor Swift and Kanye West, are both in the running for the prize, and we all remember their baggage.
MUSIC・6 DAYS AGO