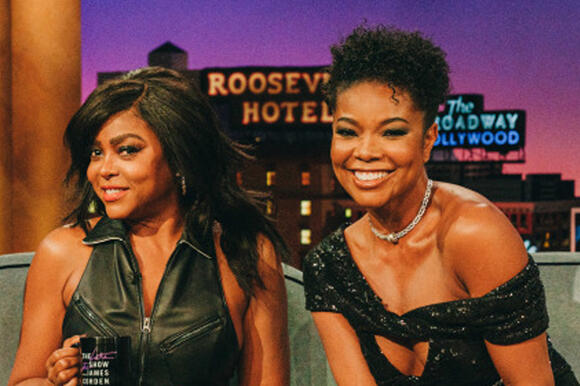 Gabrielle Union and Taraji P. Henson doubled up on glam for a joint appearance on “The Late Late Show With James Corden” this week.

Sitting down with the late-night host on Tuesday, the two actresses both showed off their chic sartorial taste in coordinating black attire. Union went with a glittering, off-the-shoulder top complete with a peek-a-boo cutout to match her high-rise trousers while Henson decided on a slick leather jumpsuit with a halter neck and white side paneling.

When it came down to footwear, both leading ladies kept with the color scheme. The “Bring It On” alumna modeled black patent leather stiletto mules and the “Empire” star decided on glittering block-heeled sandals with a platform lift.

When it comes to fashion, Union herself has had a lengthy partnership with New York & Co. that has led to successful collections, including a size-inclusive capsule for the holidays in December 2019. The media personality also serves as a brand ambassador for SensatioNail and served as a spokesperson for years for Neutrogena.

As for red carpet style and off-duty attire, you can find the star of the upcoming “Cheaper by the Dozen” remake in everything from Chanel, Cong Tri and Valentino to Cos, Reformation and Adidas.

Click through the gallery for more of Gabrielle Union’s glam style over the years.

On Tuesday, Global K-Pop band, BTS appeared on the “The Late Late Show With James Corden.” The group sat down with Corden to discuss everything from how they relax and their latest accomplishments. They even graced the stage with a live studio performance of their latest hit, “Permission to Dance.” As if that wasn’t enough, there is more to come from the boy band and Corden. The musicians also shared a clip of themselves filming dance moves on a crosswalk. Their crosswalk concert is set to air on an upcoming episode of the late-night talk show. For the skit, the 7-piece boy band...
CELEBRITIES・13 DAYS AGO
Footwear News

Halsey brought grunge-chic to the Los Angeles Lakers game last night. The “Without Me” singer supported her team in a very rockstar-cool aesthetic while sitting courtside. She kept it casual with her clothes and wore a black tank top with rips beneath the shirt’s collar and a white printed design on the front. She matched the shirt with a pair of black bootleg jeans. The musician accessorized with a short gold chain layered with a longer gold cross necklace. She also wore a pair of thick gold hoop earrings. She attended the event with her boyfriend, Alev Aydin. The 27-year-old elevated her...
CELEBRITIES・8 DAYS AGO
Footwear News

Why Did Pete Davidson Just Take Over Calvin Klein’s Instagram?

Calvin Klein is changing up their Instagram. On Monday afternoon, the iconic brand’s page revealed its new profile photo to be a snap of “Saturday Night Live” comedian Pete Davidson wearing a logo cap. Moreover, “Pete’s here,” is all their account’s bio says. That’s not all, though. Calvin Klein’s latest post is a mirror selfie of Davidson giving the peace sign in a classic white logo tee. “I got Instagram,” the caption reads. View this post on Instagram A post shared by Calvin Klein (@calvinklein) The 28-year-old TV star, who’s sporting platinum blond hair and blue nail polish in the picture for Calvin Klein, is actually no stranger to modeling. In addition to starring alongside models Emily Ratajkowski and Adwoa Aboah in a new Moose Knuckles campaign, he’s also hit the runway and posed for Alexander Wang. Moreover, the “King of Staten Island” actor, who has been making headlines recently for dating Kim Kardashian, donned a pair of glossy Celine dress shoes and sunglasses with a timeless black suit for the Kennedy Center Honors reception at the White House this weekend. Scroll through the photos to check out Pete Davidson’s style through the years.
BEAUTY & FASHION・1 DAY AGO
Shape Magazine

Taraji P. Henson Opened Up About Feeling Confident at Any Age: 'Your Sexy Never Dies'

This story originally appeared on People.com by Charmaine Patterson. Taraji P. Henson is all about loving herself at any age!. The Empire alum, 51, stopped by The Kelly Clarkson Show Thursday. While discussing her role as Miss Hannigan for NBC's upcoming Annie Live!, Henson recalled singing the classic song "Tomorrow" in kindergarten.
CELEBRITIES・4 DAYS AGO

James Corden’s sisters made a rare appearance on ITV’s This Morning on Tuesday and revealed one of the most extravagant experiences that their famous brother has treated them to. Chatting to Holly Willoughby and Phillip Schofield, Ruth and Ange Corden recalled a time when James flew with them on a...
CELEBRITIES・14 DAYS AGO
Hypebae

Shortly after taking home Artist of the Year at the 2021 American Music Awards, BTS has reunited with James Corden for an episode of The Late Late Show. Sitting down with “Papa Mochi,” the K-pop group opened the show by addressing the backlash Corden received after making a comment about ARMYs being “15-year-old girls.” RM asked the host: “James, you’ve been in some hot water with ARMYs. Are you all right?” The comedian then explained the situation to the audience, emphasizing that he is also a BTS fan himself. “I’ve never been on that side of the ARMY before… We absolutely love you, and we love the entire ARMY,” he shared. Speaking on behalf of the group, RM shook hands with Corden, saying they accept his apology. In the latter half of the interview, the septet celebrated being nominated for the Grammys, and shared more updates on their recent activities and shows.
THEATER & DANCE・13 DAYS AGO
Soompi

Watch: BTS Reunites With James Corden In The Studio For “The Late Late Show” + Performs “Permission To Dance”

BTS has returned to the studio for “The Late Late Show with James Corden”!. The group made a studio appearance on November 24 KST for the first time in almost two years, sitting down for a fun interview with James Corden. The host congratulated BTS on their Grammy nomination and...
THEATER & DANCE・13 DAYS AGO
kpopstarz.com

After it was announced that BTS would be appearing on "The Late Late Show with James Corden," BTS was spotted by fans filming for the show with an exciting performance of their hit songs on the road. Keep on reading to know more. BTS Films Crosswalk Concert for 'The Late...
THEATER & DANCE・14 DAYS AGO

Sometimes in Los Angeles, magic just happens! The megahit K-Pop group BTS gave West Hollywood drivers a thrill with an epic Late Late Show crosswalk concert. The concert -- which was filmed on Tuesday, and is set to air in a future episode -- saw James Corden team up with BTS to perform some of their biggest hits right in the middle of traffic, as drivers waited at red lights.
MUSIC・13 DAYS AGO
allkpop.com

On November 24 KST, BTS was spotted filming James Corden's segment 'Crosswalk Concert,' where various artists perform in the middle of the street while traffic is stopped. Although the official performance is set to air at a future episode, videos and pics have been released by entertainment channels such as TMZ and JustJared, as well as by people who were at the venue.
TV & VIDEOS・13 DAYS AGO
NME

James Corden addresses backlash from BTS fans: “I’ve never been on that side of the ARMY before”

James Corden has addressed the backlash he previously faced from BTS‘ fans during his recent interview with the group. The K-pop boyband made an appearance on The Late Late Show With James Corden during its recently aired November 24 episode, where they ask Corden how he has been since being “in some hot water with ARMYs”, the name for BTS’ official fanbase.
CELEBRITIES・13 DAYS AGO
allkpop.com

The biggest group in the world BTS is back on 'The Late Late Show with James Corden'!. The boys have finally arrived in the 'Late Late Show' studio for the first time in 2 years as a part of their latest activities in the U.S, and on this day, BTS performed their hit track "Permission To Dance" as the musical guest of the evening, and also sat down with host James Corden for an interview.
THEATER & DANCE・13 DAYS AGO

Taraji P. Henson Shares The First Look At Her Character Ahead Of ‘Annie Live!’

Taraji P. Henson is set to take the stage as Miss Hannigan in tonight's "Annie Live!" and she took to Instagram to share a few behind-the-scenes photos ahead of the premiere.
CELEBRITIES・5 DAYS AGO
TMZ.com

BTS is at the intersection of global fandom these days -- but right now, they're literally at the intersection of Genesee and Beverly in Los Angeles -- with none other than James Corden. The Korean pop band -- consisting of a whopping 7 members -- appears to be involved in...
LOS ANGELES, CA・14 DAYS AGO
allkpop.com

"Someone told me that they hope I die today, which did feel extreme," Corden said on "The Late Late Show."
CELEBRITIES・12 DAYS AGO
deltadailynews.com

Taraji P. Henson is one of the stars of Annie Live! airing Thursday, and she’s enjoying being cast in the role of Miss Hannigan, which was was portrayed by Carol Burnett in the 1982 Annie film. “As a young, Black artist, studying in college all those years ago, and wanting...
MUSIC・7 DAYS AGO
RNB Cincy 100.3

Gabrielle Union took to Instagram to spread some holiday cheer in an all-red jumpsuit from her New York & Company collection.
DESIGNERS & COLLECTIONS・13 DAYS AGO
Indy100

BTS last night took to the stage on The Late Late Show with James Corden, much to the delight of fans. The K-pop group treated fans to a live performance and enjoyed a sit-down chat with Corden where they spoke about the host getting on the bad side of BTS’s fanbase, Jimin’s workout routine and how the group adapted during the pandemic.
THEATER & DANCE・13 DAYS AGO