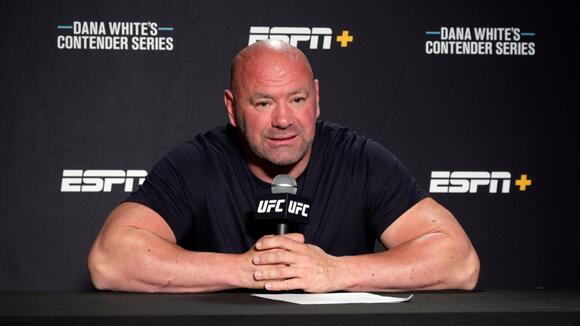 UFC president Dana White expressed sympathy for the recent passing of a BKFC fighter, while explaining why his promotion does more than any other to prevent such occurrences.

On Monday, Justin Thornton, an MMA veteran who made the move to bare-knuckle boxing, died after a knockout loss at BKFC 20 on Aug. 20. The 38-year-old fighter was on a five-fight, first-round stoppage losing streak before taking the fight against Dillon Cleckler. Thornton was knocked out 18 seconds into the fight, falling to the canvas face first.

The nature of Thornton’s passing prompted the Association of Boxing Commissions to issue a statement addressing concerns about bare-knuckle competition and its promoters who are not following the appropriate medical guidelines. White is well aware of the practices surrounding bare-knuckle boxing, and although sympathetic, was not surprised that a death occurred.

“First of all, let me start here, is anybody shocked?” White said during the DWCS 42 post-fight news conference. “In bare-knuckle fighting? You know, I’m not a big fan. I get, I guess you can call it concerned, when I see some of our people leave here and go there. It’s like, ‘Oh, God.’

“We’ve been putting on fights for 25 years. I’ve done over 7,000 fights with no serious injuries in the UFC. We’ve had some broken bones, some bad broken bones, the shin bone being the worst. It just blows our mind when that bone breaks, and cuts … that’s what we have.”

According to White, the UFC does everything in its power to ensure its athletes are not only healthy enough to compete prior to entering the cage, but also after the fight has concluded.

“Fighter safety is a very big deal to us, has been since Day 1,” White explained.” We ran toward regulation. We do extensive pre-, post-fight medicals. We follow up afterward with these guys. …The other night when Ortega fought, I walked right into the Octagon and told his corner, ‘Do not do an interview, do not talk to any media. I want you to go straight back, they’re ready for you. They’re going to put him in an ambulance and take him out of here.”

The medical bills for a roster of the UFC’s size, which is currently over 700 athletes, can add up very quickly. However, the promotion only covers medical expenses that are fight-related. There is no medical insurance provided by the UFC for the fighters because they are independent contractors. Given the standard nature of the business relationship, the promotion still spends a hefty sum of money annually to look out for their safety.

“Every year we spend over $20 million on athlete medical,” White said. “Twenty million bucks. A year. Health, wellness whatever it may be. Twenty-five percent of our athletes, we send to specialists. … As a result of that pre-fight screening, we’ve found 10 athletes that had life-threatening medical problems with them that were career-ending where they shouldn’t be fighting. If they weren’t in the UFC, they probably would have fought and probably would have died.”

In February, the promotion released Askar Askar following a pre-fight heart scan that revealed abnormalities. He stepped up on short notice to face Cody Stamann at UFC Fight Night 184, but he was removed from the fight just hours prior to the event after failing to clear medical testing. Askar would later receive clearance after visiting a specialist and competed under the LFA banner four months later.

“There’s a lot of sh*t talk about us,” White said. “Nobody does even remotely close to what we do in this sport. It’s never been done, what we do, and nobody ever will. We shouldn’t even be talked about in the same sentence as bare knuckle boxing. It’s two completely different worlds.

“We’re very sorry to hear that this guy passed away, but you’re never going to see these other organizations do the type of health, safety, and medical testing that we do for our athletes.”

Fighters On The Rise | UFC Fight Night: Vieira vs Tate

We close out the month of November with one more offering from the UFC APEX, with Saturday’s fight card featuring a host of promising talents and competitive matchups, and capped by a bantamweight clash between Ketlen Vieira and Miesha Tate. Before the former champion makes her second trip into the...
UFC・13 DAYS AGO
SPORTbible

Fans have been left terrified after the referee failed to stop a fight between boxer Kubrat Pulev and MMA fighter Frank Mir whilst the latter was completely out on his feet. The incident took place as part of Triller's Triad Combat event, which pitted mixed martial arts fighters against boxers over a night of fighting.
UFC・1 DAY AGO
bjpenndotcom

Colby Covington claims that his rival Kamaru Usman told Dana White “I don’t know how much more I got left in this sport” after UFC 268. Covington gave Usman all he could handle when the pair met earlier this month in their rematch that headlined UFC 268. Much like their first encounter back at UFC 245 two years ago, this rematch was a competitive fight that saw both men have their moments. However, it was Usman who was awarded the decision on the judges’ scorecards following the match, and he is now a perfect 2-0 against Covington. Despite Usman having the superior record head-to-head against his rival, Covington still wants to fight him again.
UFC・5 DAYS AGO
MMAmania.com

I’ve been to several live UFC events and I’ve never stood up, panned the crowd and thought to myself, “Wow, look at all these intelligent people.” I’m usually too busy planning my escape route in case something like this happens. But they certainly exist, and we can thank MMA pioneer...
UFC・11 DAYS AGO

Cody Durden’s first UFC win will be remembered, but likely for all the wrong reasons. The 30-year-old Georgia native defeated Qileng Aori on Saturday, winning a hard-fought unanimous decision on the preliminary card of UFC Vegas 43. It was Durden’s first octagon victory in three appearances, however much of the reaction to the fight online stemmed not from Durden’s performance, but from what the American said in his post-fight interview.
UFC・9 DAYS AGO
MMAmania.com

Former UFC lightweight champion Khabib Nurmagomedov posted another YouTube video on Wednesday celebrating the rise of Hasbulla Magomedov, the social media celebrity who started popping up at MMA events as part of the “Eagle” entourage. So why is Hasbulla famous?. Partly because the 19 year-old Dagestani is hanging around (and...
UFC・11 DAYS AGO
SPORTbible

Conor McGregor has shown off his new jacked physique ahead of his anticipated UFC return, with fans joking he's set to come back as a heavyweight. McGregor is on the mend after undergoing surgery on his broken leg that he suffered against Dustin Poirier last July. He has been keeping...
UFC・3 DAYS AGO
CBS LA

LOS ANGELES (CBSLA) – An MMA star who sued Halle Berry, blaming the actress for her firing by the UFC in 2019, is accused in new court papers filed by attorneys for Berry of actually losing her contract due to her poor fighting record. BOISE, ID – JULY 13: Cat Zingano poses on the scale during the UFC Fight Night weigh-in at The Grove Hotel on July 13, 2018 in Boise, Idaho. (Photo by Josh Hedges/Zuffa LLC) Cat Zingano, 39, sued Berry, Bruised Film Productions LLC, Thunder Road Film Productions Inc. and Romulus Entertainment LLC on Aug. 16 in Los Angeles...
UFC・12 DAYS AGO

UFC legend Miesha Tate once again spoke about Aspen Ladd after the two had their beef a few weeks ago. This time the subject of coaches dating fighters came up after it was mentioned that Ladd is in a relationship with her coach Jim West. Miesha Tate went on The...
UFC・14 DAYS AGO
firstsportz.com

“She can get away with murder,” Julianna Pena believes Amanda Nunes needs to be punished for her fight inactivity in bantamweight division

UFC women’s bantamweight title contender Julianna Pena is getting restless to take on the two-division champion Amanda Nunes at UFC 269. Amanda Nunes is undoubtedly the greatest female MMA fighter. The ‘Lioness’ rules the women’s bantamweight and featherweight division. She is now returning to the bantamweight division to defend her belt against Julianna Pena. Pena, has been waiting on this title shot for a long time and is surprised with the power Nunes has in the women’s UFC.
UFC・2 DAYS AGO
ClutchPoints

2021 wasn’t the greatest year in terms of fighting for Conor McGregor, getting knocked out by Dustin Poirier in January then breaking his leg against his UFC rival in July. However, the Irishman is on the mend now and according to his coach, looking more jacked than ever. Via The...
UFC・4 DAYS AGO
mmanytt.com

Former UFC Fighter Arrested by Police – for the Third Time in Six Months!

Former UFC fighter Luis Pena continues to run into problems with the law when he was arrested by police on Tuesday. This is the third time that The Ultimate Fighter participant has been arrested in less than six months. According to the police in Florida, the 28-year-old is in custody...
PUBLIC SAFETY・4 DAYS AGO

Anthony Smith has had a strange beef with Conor McGregor. The former UFC champion has been firing shots at Smith for a long time. The UFC light heavyweight had trouble figuring out what the Irishman’s problem was. He now believes he has figured it out. Anthony Smith took to his...
UFC・11 DAYS AGO
MMA Fighting

Former UFC flyweight champion Nicco Montano joins The Fighter vs. The Writer in episode 12 to discuss the arduous journey she’s traveled since becoming the first person to win the 125-pound title back in 2017. Montano will detail the struggles she faced with her weight cuts, including the disastrous attempt to get down to flyweight that ultimately cost her the title for a fight scheduled against Valentina Shevchenko.
UFC・13 DAYS AGO
USA TODAY Sports Media Group

Randa Markos among 6 fighters no longer on active UFC roster

UFC record: 5-5 “The Ultimate Fighter,” Season 23 light heavyweight winner, Andrew Sanchez experienced his ups and downs over his 10-fight UFC tenure. His wins in the promotion include Khalil Rountree, Marc-Andre Barriault, and Wellington Turman among others. Sanchez departs the promotion after three losses in his most recent four fights.
UFC・14 DAYS AGO
Insider

Michael Chandler lost a three-round war to Justin Gaethje in one of the UFC's great lightweight fights of the year.
UFC・14 DAYS AGO
Sherdog

The official weigh-ins for UFC Vegas 43 took place on Friday in Las Vegas, and 24 of the 24 fighters scheduled to compete have made weight. In the main event of UFC Vegas 43, both women’s bantamweight headliners Miesha Tate and Ketlen Vieira successfully made weight. Vieira stepped onto the scale at the maximum non-title limit of 136lbs for a women’s bantamweight contest, while Tate was just a smidge below her at 135.5lbs. And with that, the main event of Saturday’s UFC card is official.
UFC・10 DAYS AGO