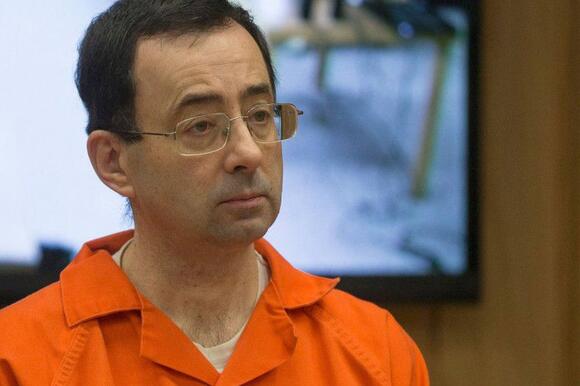 Speaking at a hearing before the Senate Judiciary Committee, Monaco said that the head of the DOJ’s criminal division, Kenneth Polite, “is currently reviewing this matter.”

“In light of that review … I am constrained in what more I can say about it,” she said.

The review comes months after a report from the DOJ’s Office of the Inspector General found that senior officials in the FBI’s Indianapolis field office failed to take allegations of Nassar’s abuse seriously when they learned of them in July 2015. More than 300 women and girls have accused Nassar of sexual abuse, including many members of the 2012 and 2016 U.S. Olympic women’s gymnastics teams, according to The New York Times.

The report singled out two FBI agents for their handling of the investigation: Indianapolis field office Special Agent in Charge W. Jay Abbott and a supervisory special agent who has been identified as Michael Langeman, according to Reuters. Langeman was recently fired over his handling of the case while Abbott retired in January 2018, CNN reported.

“The (inspector general) documented inexcusable, unacceptable failures, some of them quite fundamental failures – a lack of urgency, a lack of care for the victims who we have a duty to protect,” Monaco said Tuesday.

“I blame Larry Nassar, and I also blame an entire system that enabled and perpetuated his abuse,” Biles said, adding that the FBI and gymnastics officials turned “a blind eye” to the abuse. “We suffered and continue to suffer because no one at the FBI, (USA Gymnastics) or the (United States Olympic and Paralympic Committee) did what was necessary to protect us.”

Maroney, who was interviewed weeks after the FBI learned of the allegations against Nassar, said she felt “completely betrayed” by investigators.

“By not taking immediate action from my report, they allowed a child molester to go free for more than a year, and this inaction directly allowed Nassar’s abuse to continue,” she said. “They had legal, legitimate evidence of child abuse and did nothing.”

On Tuesday, Monaco said the survivors of Nassar’s abuse “deserved better than what they got from the FBI and from the Justice Department.”

“I want the survivors to understand how exceptionally seriously we take this issue and believe that this deserves a thorough and full review,” she said. Later, she added that the investigation is being handled with “a sense of urgency and gravity with the work that needs to be done.”

“These individuals betrayed the core duty that they have of protecting people,” he said. “They failed to protect young women and girls from abuse. … As long as I’m FBI director, I’m committed to doing everything in my power to make sure they never happen again.”

Prosecutors have accused former President Donald Trump's ex-adviser Steve Bannon of attempting to try his criminal case through the media instead of in court and have asked a judge to limit what Bannon can release publicly throughout the case, according to a new filing in DC District Court. Bannon is...
CONGRESS & COURTS・19 HOURS AGO
bpr.org

The DOJ is targeting unruly airline passengers for prosecution

U.S. Attorney General Merrick Garland on Wednesday directed federal prosecutors across the country to prioritize the prosecution of airline passengers committing assault and other crimes on board. This directive came the same day millions of Americans hit the skies for Thanksgiving Day travel — and amid record levels of unruly,...
CONGRESS & COURTS・4 DAYS AGO
Fox News

After the Kyle Rittenhouse verdict could a defamation lawsuit or DOJ investigation be next?

In the aftermath of the Rittenhouse verdict, figures on both sides of the case are threatening new filings and investigations. It seems likely that the case will move into a new stage of litigation, particularly civil litigation. However, advocates on both sides may be overstating the basis for a Rittenhouse 2.0. These lawsuits can come with risks and considerable costs. That is why Voltaire once lamented "I was never ruined but twice: once when I lost a lawsuit, and once when I won one."
CONGRESS & COURTS・9 DAYS AGO
WashingtonExaminer

As John Durham's investigation takes shape, the question of whether the special counsel will charge anyone else at the FBI looms large.
U.S. POLITICS・14 DAYS AGO

House Republicans in the Judiciary Committee have sent a Tuesday letter to Attorney General Merrick Garland after an FBI whistleblower provided ‘a protected disclosure’ revealing that “the FBI’s Counterterrorism Division is compiling and categorizing threat assessments related to parents, including a document directing FBI personnel to use a specific “threat tag” to track potential investigations.”
U.S. POLITICS・12 DAYS AGO
POLITICO

Jeffrey Clark would be the second figure in the former president's orbit to face a contempt referral so far during the investigation, after Steve Bannon.
CONGRESS & COURTS・5 HOURS AGO
FOX40

NEW YORK (AP) — Ghislaine Maxwell and Jeffrey Epstein were “partners in crime” in the sexual abuse of teenage girls, a prosecutor said Monday, while Maxwell’s lawyers said she was being made a scapegoat for a man’s bad behavior as the British socialite’s sex trafficking trial got underway in New York. Assistant U.S. Attorney Lara […]
PUBLIC SAFETY・7 HOURS AGO
airwaysmag.com

Rowdy Passengers Beware: US DoJ to Ramp up Prosecutions

MIAMI – The US Department of Justice (DOJ) has urged US attorneys to prioritize the prosecution of airline passengers who have committed federal crimes aboard aircraft as air travel goes up across the country this Christmas season. The directive was issued as the Federal Aviation Administration (FAA) reported 5,338 rowdy...
CONGRESS & COURTS・2 DAYS AGO
WashingtonExaminer

Attorney General Merrick Garland is under fire from Republican lawmakers for allegedly politicizing the Justice Department.
CONGRESS & COURTS・3 DAYS AGO
The Independent

The chairman of the House Judiciary Committee blasted the verdict released on Friday in the trial of Kyle Rittenhouse and called for the Justice Department to review the court decision.Rep Jerry Nadler’s remarks veered sharply from the message issued by President Joe Biden, who unlike progressives said that he respected the jury’s decision.Mr Nadler tweeted after Mr Rittenhouse was found not guilty on all charges that the verdict was a “miscarriage of justice” that “sets a dangerous precedent which justifies federal review by DOJ.” “Justice cannot tolerate armed persons crossing state lines looking for trouble while people engage in...
CONGRESS & COURTS・10 DAYS AGO

House Democrats are hoping that the Justice Department's indictment of Steve Bannon results in a conviction for contempt of Congress, but if it does it would be the first in decades. In recent history, the DOJ has declined to even pursue such cases. The difficulty of obtaining convictions in these...
CONGRESS & COURTS・12 DAYS AGO
Newsweek

Donald Trump Must Have a Diabolical Plan, Officials Assumed. But There Was No Plan

In this daily series, Newsweek explores the steps that led to the January 6 Capitol Riot. On November 29, President Donald Trump gave his first TV interview since the election, appearing on "Sunday Morning Futures" with Maria Bartiromo. The president spoke for 46 minutes over the phone and delivered an extended monologue, going through his litany of evidence of voter fraud, calling the election a "fraud" and "rigged."
POTUS・14 HOURS AGO
Business Insider

A Capitol police officer resigned after being charged with obstructing the January 6 investigation. Prosecutors have made a "tentative" plea offer to begin negotiations to resolve the criminal case. The former officer, Michael Riley, is due back in court in January 2022. The Justice Department has extended a "tentative plea...
PUBLIC SAFETY・5 HOURS AGO

Kyle Rittenhouse Rips Lawyers as They Feud Over His $2M

Photo Illustration by Thomas Levinson/Photos Getty Images. Kyle Rittenhouse’s high-profile murder trial came to an end Friday with an acquittal, but the legal fight over the fate of his $2 million bail money is just beginning. Immediately after the jury in Kenosha, Wisconsin, ruled Rittenhouse not guilty, his defense team...
PUBLIC SAFETY・1 DAY AGO
Business Insider

Wood now says that "Stop the Steal," a movement driven by a network of Trump supporters, is actually a campaign by the "deep state."
ALPHARETTA, GA・20 HOURS AGO
Newsweek

Steve Bannon Faces Over 1,000 Pages of Evidence and Materials From Prosecution in Contempt Case

The Justice Department said it has handed over 65 documents per Bannon's defense team's request, while also accusing them of "frivolous" legal complaints.
POLITICS・13 HOURS AGO
Business Insider

Ten states, including Alaska, New Hampshire, Kansas, and Missouri, sued to block the mandate and said it was unconstitutional.
U.S. POLITICS・7 HOURS AGO