Michail Antonio Stays With West Ham, Out for Jamaica vs. USMNT 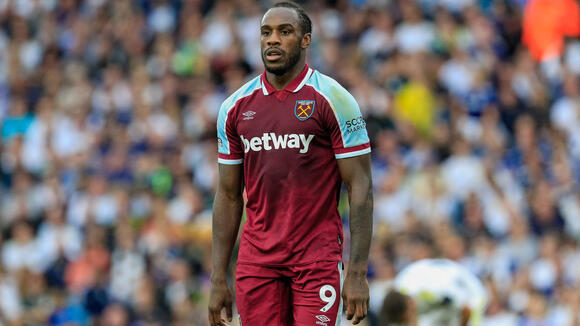 Antonio, the Premier League player of the month for August, will remain in England.

“I can confirm that, unfortunately, I will not be joining up with the Jamaica national squad for the World Cup qualifying matches this week,” Antonio said in a statement issued Tuesday by the Jamaica Football Federation.

“Myself, West Ham United, and Jamaica have all agreed that, given the logistical and travel difficulties involved at present, it is better for me to remain with the club in London at this time,” he said. “I remain fully committed to Jamaica and look forward to representing my country in the future.”

Antonio’s parents are from Jamaica. The 31-year-old made his national team debut in a 3-0 loss to Panama in Kingston on Sept. 5.

Jamaica plays the U.S. on Thursday night, is home against Canada on Sunday and is at Honduras on Oct. 13.

West Ham United will be without Lukasz Fabianski and Michail Antonio for Thursday's trip to Rapid Vienna. Hammers boss David Moyes has decided to rest the duo as the club have already qualified for the Europa League knockout stage. "Michail is not here, no," Moyes told a pre-match press conference.
PREMIER LEAGUE・13 DAYS AGO
90min.com

In form Manchester City welcome West Ham United to the Etihad Stadium on Sunday afternoon in an enticing clash at the sharp end of the Premier League table. Guardiola's litany of stars come into the contest on the back of four consecutive victories, the latest of which sealed their place as Champions League group winners ahead of Paris Saint-Germain and their much feared front three. West Ham may not pose quite the same high profile firepower but could well prove to be a sterner test given they defend with all 11 players.
PREMIER LEAGUE・12 DAYS AGO
SB Nation

Talking Points ahead of Manchester City vs West Ham

This weekend will see a rematch of the fourth round of the Carabao Cup, as Manchester. City hosts West Ham United. Both sides will be coming into the match hot off of wins in European competition. For. Manchester City, it was a 2-1 victory against Paris Saint Germain which helped...
PREMIER LEAGUE・10 DAYS AGO
Tribal Football

West Ham captain Declan Rice says he's ready to stay with billionaire Daniel Kretinsky now involved. Kretinsky bought a 27 per cent stake in West Ham earlier this month and has agreed an option for a full takeover of the club as part of his deal with David Sullivan and David Gold.
PREMIER LEAGUE・9 DAYS AGO

Prediction and odds for the game: West Ham (10/11) vs Brighton (3/1) On Wednesday night, West Ham will look to get back to winning ways on Wednesday night, as they host Brighton in the Premier League. West Ham. The Hammers have suffered a slight dip in form of late in...
PREMIER LEAGUE・8 DAYS AGO
The Independent

Manchester City host West Ham today in a Premier League top-four battle at the Etihad Stadium.Pep Guardiola's side come into the game full of confidence following back-to-back wins in the Premier League before victory over PSG in the Champions League in midweek. City came into the weekend second in the table behind leaders Chelsea, and can ill-afford a slip-up now. FOLLOW LIVE Man City vs West Ham build-up, team news, score and goal updatesThe Hammers had been flying with four wins on the bounce until last weekend's surprise defeat at Wolves, and David Moyes knows it will be a tough...
PREMIER LEAGUE・10 DAYS AGO
goal.com

Michael Carrick led Manchester United into battle with Chelsea and claims to feel frustrated at having to settle for a 1-1 draw in what may be his only game at the helm. "I don't think it was a penalty at all. They have had a lot of shots David had two saves which we knew before the game he would have to make one or two. Other than that I have felt quite comfortable in the game. Of course we want to be better. I am not getting carried away but I thought we defended well. I cannot fault the boys one bit.
PREMIER LEAGUE・9 DAYS AGO
SB Nation

Manchester City had to battle a game West Ham and severe winter conditions to earn a slight 2-1 victory at the Etihad. In freezing temperatures, Ilkay Gundogan gave City a first-half lead after good work by Riyad Mahrez. Though chances came and went for the champions, sub Fernandinho’s 90th-minute goal...
PREMIER LEAGUE・9 DAYS AGO

Find out why our expert has under 1.5 goals as one of his three West Ham vs Chelsea betting picks for Saturday’s big match. The London Stadium is the venue at lunchtime on Saturday for what is arguably the biggest fixture in the 15th round of Premier League games this season, as West Ham entertain cross-capital rivals Chelsea.
PREMIER LEAGUE・5 DAYS AGO
Absolute Chelsea

West Ham vs Chelsea: How to Watch/Live Stream | Premier League

Chelsea travel from west to east on Saturday afternoon for the Premier League London derby against West Ham. Thomas Tuchel's side head to the London Stadium following a 2-1 win in midweek over Watford to maintain their place at the top of the table. Meanwhile, West Ham were struck with...
PREMIER LEAGUE・5 DAYS AGO
Yardbarker

West Ham host Chelsea in the Premier League at London Stadium on Saturday afternoon,. Thomas Tuchel's side are currently top of the league, one point clear of Manchester City in second ahead of this weekend's matches. The hosts occupy the fourth Champions League spot but are without a win in...
PREMIER LEAGUE・4 DAYS AGO
The Independent

David Moyes was left frustrated by a VAR call after West Ham were pegged back to a 1-1 draw by bogey team BrightonThe Hammers led through a Tomas Soucek header but had a second goal disallowed for offside against Michail Antonio following a goalmouth scramble.After a lengthy review VAR Jarred Gillett decided the ball had brushed Antonio’s ankle on the goal-line after Craig Dawson bundled it goalwards via the legs of Brighton defender Shane Duffy.Hammers boss Moyes said: “I didn’t think we played well but we made enough chances to probably nick the game, but a draw was a fair...
PREMIER LEAGUE・6 DAYS AGO

To help commence a weekend of EPL action, Chelsea (10 wins, 1 loss, 3 draws) travels to Olympic Stadium to take on West Ham United (7-4-3). The kickoff is scheduled for 7:30 a.m. ET. Below, we preview the West Ham vs. Chelsea odds and lines, and make our best EPL bets, picks and predictions.
SOCCER・4 DAYS AGO
Absolute Chelsea

Chelsea boss Thomas Tuchel has confirmed that changes will be made to his starting XI for their Premier League clash against West Ham United on Saturday. The Blues made six adjustments from the side that drew to Manchester United for their 2-1 win over Watford on Wednesday, with rotation key as they enter a busy festive period of fixtures.
PREMIER LEAGUE・4 DAYS AGO
BBC

West Ham host Chelsea in Saturday's early Premier League kick-off - so what happened when the sides last met?. Back in April, Timo Werner scored his first goal in more than two months as Thomas Tuchel's side beat the Hammers 1-0. In a tightly-fought contest, Werner, who had struggled to...
PREMIER LEAGUE・5 DAYS AGO
The Guardian

Chelsea boss Thomas Tuchel has opened up on his plans to fix their struggling form, stating that he thinks the Blues can 'sort it out straightaway' after their loss to West Ham United. Chelsea also dropped points to Manchester United, in a game that they should have won, as they...
PREMIER LEAGUE・1 DAY AGO
The Independent

There was a change at the top of the Premier League table for the first time since October after Chelsea faltered while Manchester City and Liverpool kept up their fine recent form with away wins.Ralf Rangnick got his tenure at Manchester United off to a successful start and Newcastle were able to end their long wait for a victory.Here, the PA news agency takes a look at five things we learned this weekend.City hit summitFULL TIME | A Bernardo brace and a goal from Sterling see us go to the top of the table! 🔥🔝🐝 1-3 🔵 #ManCity pic.twitter.com/aaKvYTTWb5— Manchester...
PREMIER LEAGUE・2 DAYS AGO
FanSided

5 West Ham youngsters who could start vs Dinamo Zagreb

West Ham have already sealed top spot in their Europa League group with one match to spare. David Moyes’ side now face Dinamo Zagreb at the London Stadium in a ‘meaningless’ match for West Ham as they are already through to the Round of 16. The Croatians, on the other hand, still need to secure 2nd place in Group H to qualify for the knockout play-off round and not drop to the Conference League.
PREMIER LEAGUE・3 HOURS AGO