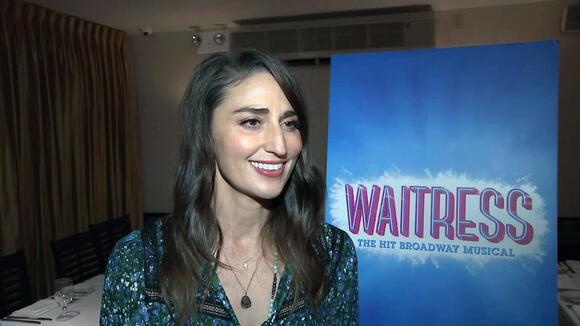 The Broadway musical "Waitress" was among the first shows to resume on the Great White Way after the pandemic forced an 18-month shutdown, and the experience proved especially emotional since a former member of the cast, Nick Cordero, died from COVID-19 last year. But as the old adage dictates, the show must go on. The performer who has been playing the title role is the same person who wrote the music and lyrics for the show, and Sara Bareilles said the show has changed her life and helped her cope with all that has happened since she was last on stage. "We went through a collective global trauma," she said. "I also deal with a lot of depression and anxiety. I have for many, many years, and that was spiking really intensely over the pandemic. So I think my body is still processing some of that grief." ALSO READ | Oscar conversation begins at New York Film Festival with 'Power of the Dog' cast

The Oscar conversation begins in earnest at the New York Film Festival, where director Jane Campion gathered her cast of 'The Power of the Dog' together.

It helped Bareilles to return to perform the songs she wrote for her first Broadway show. "It will be the great love of my artistic life until the day I die," she said. "It's changed everything. My life falls into two categories very clearly, before and after 'Waitress.' Everything about my life changed because of this show, and that's the magic of it." Long before she reached the top of the popular music charts, Bareilles dreamed of appearing on Broadway, and so did her friend Jennifer Nettles, who is taking over her role. "I grew up loving it and being a part of community theater in my little, tiny hometown of Douglas, Georgia," she said. Nettles became a top country star but always kept her eye on the original prize. In fact, she and Bareilles first bonded over their shared love of Broadway show tunes. It happened after Bareilles was hired to open for Nettles' band Sugarland a decade ago. While on tour, the pair discovered their common interest during a conversation before a show. ALSO READ | 'Bruce Springsteen Live' exhibit opens at the Grammy Museum

"Bruce Springsteen Live," a new exhibit devoted to "The Boss," opens Friday at the Grammy Museum in Newark.

It took several years before Nettles was available to appear in "Waitress," but now, she's taking over from her pal later this month. Nettles said she is looking forward to singing Bareilles' lyrics, which have only been made more meaningful after the pandemic. "Those themes of hope, of transformation, of redemption, all of those things are going to hit us more profoundly," Nettles said. ---------- * Get Eyewitness News Delivered * More New York City news * Send us a news tip * Download the abc7NY app for breaking news alerts * Follow us on YouTube

Actress Rita Moreno talks to Sandy Kenyon about appearing in Steven Spielberg's remake of "West Side Story," 60 years after she acted in the original.
CELEBRITIES・6 HOURS AGO
ABCNY

Although the show was conceived before the pandemic made teachers' jobs so much more difficult, the timing of this workplace comedy does seem fortunate.
EDUCATION・22 HOURS AGO
ABCNY

150 of the top jump roping teams from around the world took part in the 30th Annual Double Dutch Holiday Classic on Sunday.
MUSIC・2 DAYS AGO

Photographer David Urbanke is not a household name yet, but chances are, if you live in New York City, you've likely already seen his work.
NEW YORK CITY, NY・4 DAYS AGO