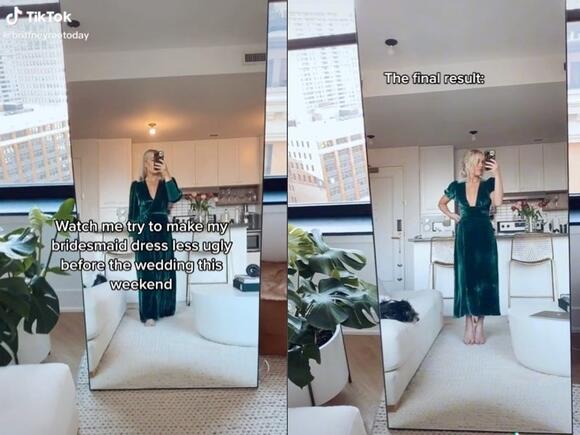 A bridesmaid has sparked a debate on TikTok after revealing the drastic alterations she made to the dress she would be wearing as part of the bridal party in her sister’s upcoming wedding.

Brittney Rae, who goes by the username @ brittneyraetoday on TikTok, documented her attempt to redesign the dress in a video uploaded last week, which she captioned: “Watch me try to make my bridesmaid dress less ugly before the wedding this weekend.”

In the video, which began with Rae wearing the green floor-length velvet bridesmaid dress she’d purchased, she explained that she “paid $300 for this frumpy robe,” before sharing a sketch of the alterations she planned to make to the dress.

As Rae cut out various portions of the dress, she noted that if she messes up the redesign, she will “have nothing to wear and the bride will KILL ME”.

In a follow-up video posted a few days later, Rae reflected on the alteration process, explaining that she had to “completely deconstruct” her bridesmaid dress and that she was a “little stressed,” before showing her wearing the final result.

While Rae was happy with the changes to the gown, many users who watched the viral TikToks, which were each viewed more than 1m times, accused Rae of attempting to steal the spotlight away from the bride, or of altering a dress that the bride chose specifically for the bridal party.

“You would be taken out of my bridal party if you did this to the dress I picked for you,” one person commented.

Another said: “I am going to say this… her wedding is not about you!”

“Did the bride give you permission? Then fine, great job. But if she didn’t, the wedding isn’t yours or about how you look,” someone else commented.

However, others pointed out that the bride could have chosen a specific colour, but then allowed the bridal party to pick their own dresses, with another viewer noting: “Y’all she clearly just bought a dress in the right colour and didn’t have to have a specific style.”

According to Rae, her sister did allow each of the bridesmaids to choose their own dresses as long as they were green, responding to one comment criticising her changes: “None of the dresses were the same. Not the same cut, fabric, or even the same shade of green.”

The bride also defended Rae in the comments, writing: “Hi bride here. They picked their own dresses in green. I LOVE what she did to her dress.”

The choice is not uncommon, as Brides says: “Gone are the days of everyone wearing the same dress,” and that brides are instead opting for a bridal party dressed in “dresses with different styles, fabrics, hemlines, and colours”.

In a follow-up video, Rae joked about the criticism, responding to a comment accusing her of trying to “upstage” the bride: “If I was trying to upstage a bride at her own wedding, I would have to do a little better than a homemade green velvet dress.”

Rae then proceeded to share some of the dress options that she would wear if her intention was to upstage the bride, such as a white gown or a red dress that is also see-through.

In another video, Rae shared videos and photos taken on the day of her sister’s wedding, in which she and the bride can be seen smiling.

♬ (Everything I Do) I Do It for You - Brandy

kind of ugly both ways, if the bride picked only the color, why did the bridesmaid pay $300 for a dress she didn't like and wanted to alter. sounds like she was just using this as a story for attention. I wonder if its even a real story. maybe it was a cheaper donated thrift dress that she wanted to practice on.

Ummm... really wearing the dress for one day, for your "friend" was a issue. You had to have you tits on full display. Really? There is always someone who seeks attention, and its you!

If she picked out the dress why pick a long frumpy velvet robe? Why not find something you didn't have to alter so drastically? Why would the bride KILL her for messing up the dress she herself picked out?

Lauren Sánchez has spoken candidly about the hardest parts about being in a relationship with billionaire Amazon founder Jeff Bezos.Sánchez, 53, who has been publicly dating Bezos, 59, since January 2019, opened up about the realities of their high-profile relationship in a new interview with WSJ Magazine, which marked her first solo interview since the couple went public.According to Sánchez, who acknowledged that she is a “very open person,” her relationship with the entrepreneur has meant that she has had to change the way she shares information, and secrets.“It’s hard. I’m a very open person. I talk a lot....
2 DAYS AGO
The Independent

Chinonye Chukwu, the director behind Till, shared a message stating that Hollywood is "committed to upholding whiteness."It comes after the biopic on Mamie Till-Bradley, the mother of murdered 14-year-old Emmett Till, received zero Oscars nominations. In an Instagram post, the 37-year-old said: "We live in a world and work in industries that are so aggressively committed to upholding whiteness and perpetuating an unabashed misogyny towards Black women."Regardless of any challenges or obstacles, I will always have the power to cultivate my own joy."Click here to sign up for our newsletters. Read More Oscars 2023: Best Actor and Best Actress nominations in fullHuge Hollywood star joins Paul Rudd in season 3 cast of Only Murders in the BuildingMargot Robbie reveals where her nickname ‘maggot’ originated
2 DAYS AGO
The Independent

Hilary Duff is on board with the Jennifer Coolidge renaissance.During an appearance on Bravo’s Watch What Happens Live on Thursday, the Lizzie McGuire alum was asked by a fan about her favorite memories of working with Jennifer Coolidge in the 2004 movie, A Cinderella Story.“I can’t even begin to tell you how much I’ve just been, like, obsessed with this past year for Jennifer Coolidge,” Duff said of Coolidge, whose received critical acclaim for her role as Tanya McQuoid in HBO’s The White Lotus.Hilary Duff and Jennifer Coolidge starred alongside each other in the high school rom-com remake of...
5 HOURS AGO
The Independent

Taylor Swift’s fans are convinced her newly released “Lavender Haze” music video contains a subtle yet intentional Joe Alwyn Easter egg.An early scene in the Grammy-winning artist’s music video, showing a vinyl cover with a printed image of a Pisces and Sagittarius constellation, has gone viral on Twitter.Many Swifties have noted the Sagittarius symbol corresponds with Swift’s birthday (13 December), while the Pisces refers to her boyfriend Alwyn’s birthday (21 February).“Joe is a Pisces and Taylor is a Sagittarius… what if I told you Taylor’s a mastermind,” one explained.A second commented: “They appear on a vinyl cover of Mastermind...
8 HOURS AGO
The Independent

Princess Diana’s iconic purple Victor Edelstein dress has sold at auction for nearly five times more than its estimated price.The strapless “Infanta”-style evening gown, which was designed by Victor Edelstein, was sold at Sotheby’s auction on Friday for ââ$604,800 (£488,545), way more than the auction house’s original estimate of $80,000 to $120,000 before the sale.Four bidders reportedly broke out into a “bidding war” over the silk velvet gown for nearly five minutes at Sotheby’s salesroom in New York, according to Vogue.The dress went up for sale on Friday as part of Sotheby’s inaugural auction called “The One”, showcasing an...
NEW YORK STATE・8 HOURS AGO
The Independent

A dress worn by Diana, Princess of Wales has been sold for nearly half a million pounds in an auction at Sotheby’s New York salesroom.The “Infanta”-style strapless purple evening gown, by Victor Edelstein, which Diana wore in a royal portrait in 1991, was bought on Friday for 604,800 dollars (£488,15) at the curated auction The One.Sotheby’s said the final bid was five times the pre-auction estimate of 80,000-120,000 dollars (£66,153-99,230).It was a record-breaking day #SothebysNewYork!LeBron James' game-worn jersey achieved $3.7M, breaking the previous record for a jersey of the athlete's by more than 5x.Our Princess Diana Gown reached $604k, sealing...
NEW YORK STATE・8 HOURS AGO
The Independent

Odele Ventimiglia, the daughter of Sopranos actor John Ventimiglia, has died at the age of 25 just three months after giving birth. Ms Ventimiglia died on 12 January and the cause of death has not been made public. Mother Belinda Cape said in a post on Facebook that the family was “heartbroken”. Mr Ventimiglia appeared on the HBO show between 1999 and 2007 as Artie Bucco. “Heartbroken to have to post our darling Odele’s funeral notice. Her sister Lucinda and I have been overwhelmed by the messages of support and love we have received, and your remembrances of how cherished...
BROOKLYN, NY・12 HOURS AGO